No permission to download
Overview History Discussion
Leave a rating

Having tried (and enjoyed) AJHG1000's replica of the current track, I wanted to have a go at recreating the version of the circuit used for the Mexican Grand Prix during the period 1986-1992, in case anyone wanted to attempt any Mansell-esque heroics into Peraltada. I think it's a close thing length-wise, though obviously the start-finish line is at the wrong end of the straight, and I don't have a huge amount of trackside objects. The track creator threw in some interesting bumps for me in the first few corners, though obviously it won't be anything like as bumpy as the old circuit (watch the Michele Alboreto onboard footage from 1990 to see how bad it was!). As ever, certain sections are as close as I could attempt given the limitations of the track creator. Enjoy, there are a couple of corners there which can catch you out. Cheers! 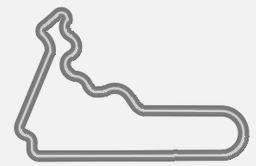