A 3 km long track in the Eifel hills , that doesn't take long to learn.
But to master it , well that's another story. 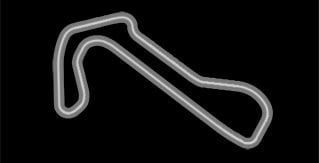 The track creator / info card claims that there are 22 turns , but I only count them as 10.

The first turn starts as a simple lefthander , but soon it drops down to a banked downhill. Going too too fast in the turn will result in a lawn moving experiment.
After that the track turns into a gentle uphill left followed by a flat out right.


For stock 400-450pp cars on sports hard tyres the lap times are are around 1 minute 20 seconds.
The Group B Rally Cars should be able to lap this track under 1 minute 10 seconds on Racing Hard tyres.


Thank you @PASM for the track image and the YouTube video.