Bit late to the party.


Indianapolis doesn't have a Grade 1 classification since the rebuild years ago so F1 at Indy won't happen quickly.

At the rate things are going in Texas, I wouldn't be surprised if the USGP gets cancelled as well.

toastet
Bit late to the party.


Indianapolis doesn't have a Grade 1 classification since the rebuild years ago so F1 at Indy won't happen quickly.
Click to expand...

Do an Indy double. GP circuit and MotoGP circuit.

It is on the list but the Grade 1 graded configuration doesn't exist anymore. Grade 1 is for the 4.192 km GP-Layout which was rebuild after 2007. The actual Grand Prix Layout used in Moto GP or Indycar is only 3.925 km. Circuits only expire from this list after the fixed date the grading has to be redone. F.e. India is still on the list but the circuit is not useable anymore. Or the other way round Nürburgring was absent at the beginning of last year and they had to regrade during the F1 summer break to be able to host the Eifel GP.

Dreadmed
Question is if they will look to find a replacement... Shanghai, another go on the Sakhir outer loop? That said, the Turkish GP is the week preceding what should have been the race in Suzuku, so maybe another chilly trip to the Nurburgring?
Click to expand...

Turkey might be in danger too. It's currently on the red list, which means that all visitors have to isolate themselves for ten days after leaving Turkey for the UK. Going directly from Turkey to Japan was going to take up 7 days, then 3 days staying in Japan before flying back allows that to happen.

NotThePrez
At the rate things are going in Texas, I wouldn't be surprised if the USGP gets cancelled as well.
Click to expand...

Would be a huge 180 as COTA is still asking if people would like to be contacted when/if tickets for a second GP go on sale. Can't tell if the idea of a Texas double header was indication the Japan GP was going to be cancelled or if the cancellation pushes the double header closer into fruition.

Either way, it better not be cancelled. Something I'm super looking forward to and would rather not wait another a year (even if COTA has been gracious with giving an option for ticket holders carry over instead of refunding).

I guess I was wrong.

I HAVE 2 TICKETS FOR THE SATURDAY!!!! 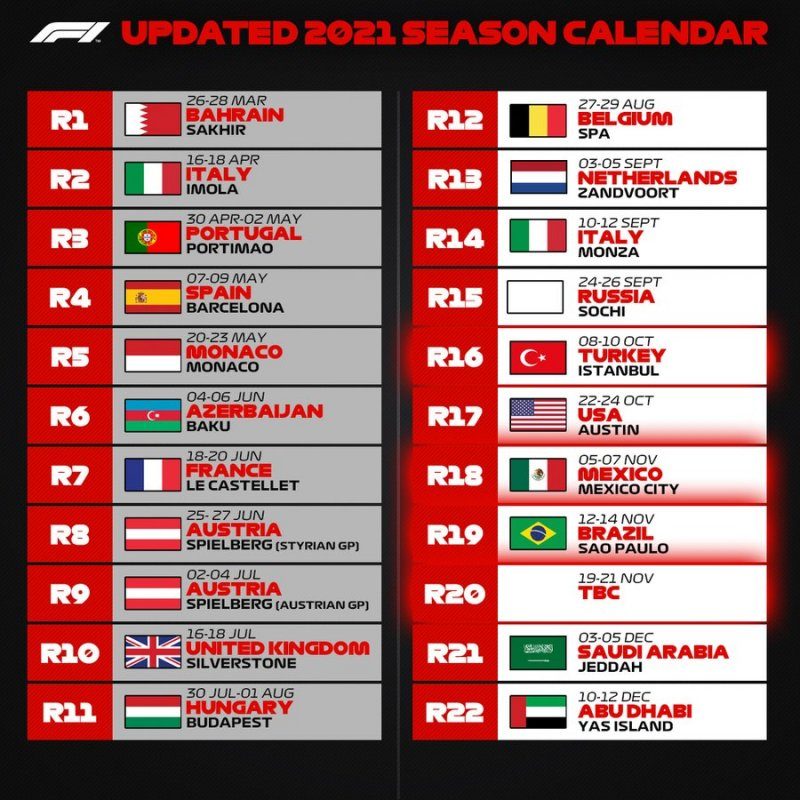 Abu Dhabi progress video. Not much to see though, just some quick timelapses of the work.

For F1 fans in the UK, NOW TV have a special offer for the next few days to sign up for 3 months at £20 a month to get full access to Sky Sports (normal cost is £34 a month), which basically means that the rest of the F1 season is watchable for £60, which for 8 races is not bad. The fact that you also get the entire rest of Sky Sports until Xmas makes it quite a good deal too.

Racefans seem to think they have the draft for the 2022 calendar. Take it with a pinch of salt, but this seems legit. 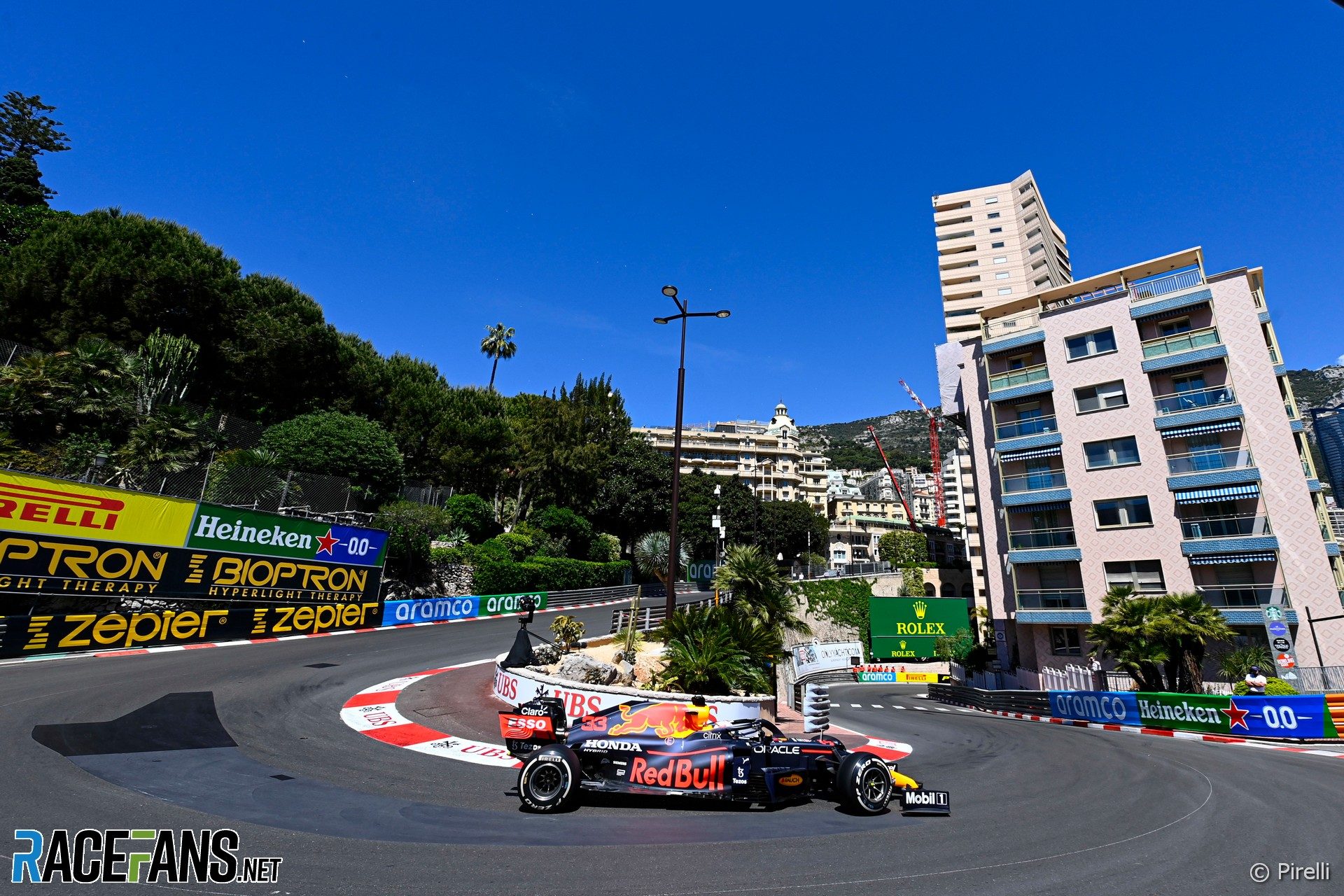 Formula 1 is planning a record 23 races in 2022 plus three more triple-headers, while the Monaco Grand Prix weekend will be shortened.
www.racefans.net

FOM "We got you fam, more triple headers it is"

Good news that they're having another go at wrangling TV directing from TMC for Monaco though. It didn't work last time they tried but maybe all the evidence of terrible directing will be enough to sway the ACM this time.

That calendar is packed and the season finishes in November. I was expecting December with that many races.

21 races was already a bit much. That should be the maximum.

Monza survives for another year potentially. I read about the low turnout this year. 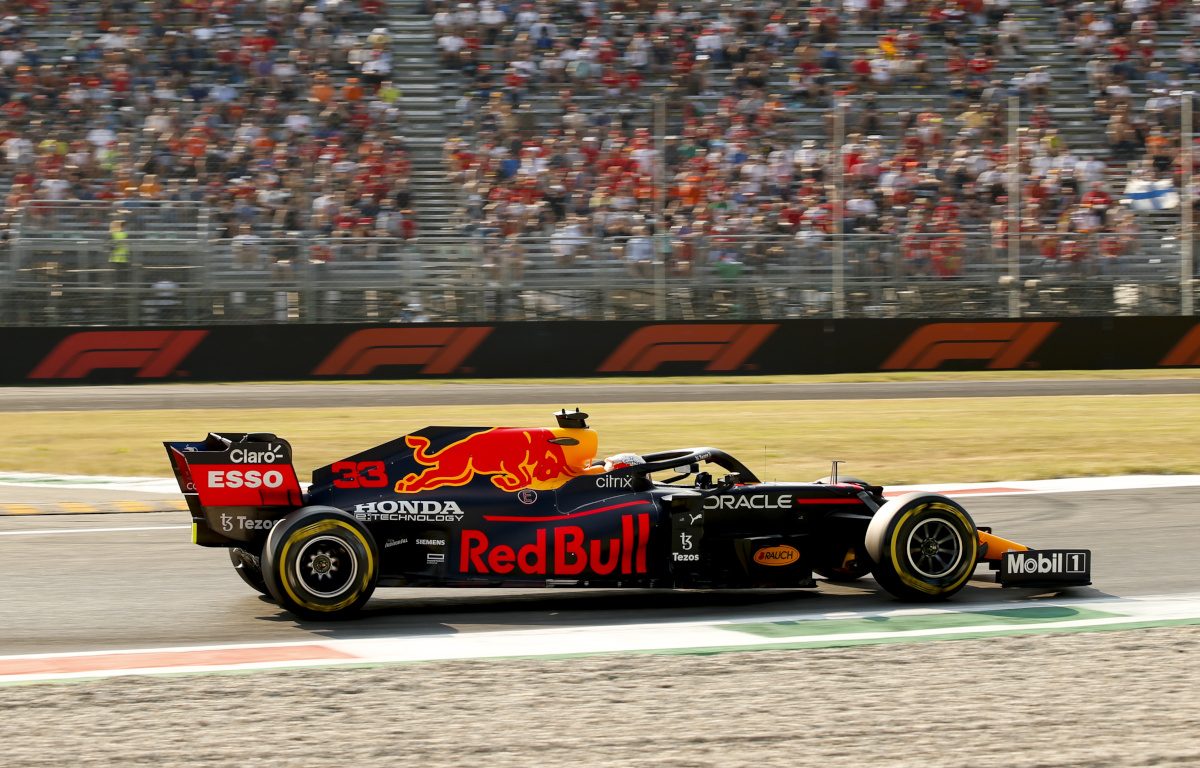 Failing to attract big crowd, despite it being Ferrari's home event, F1 bosses admit the Italian GP's place on the grid is not guaranteed.

Erm, wasn't Monza running at low capacity because of Government COVID restrictions? How can they complain?

Yes it was grandstands only, nobody could stand around the park in general admission. But I guess they expected all the stands to be full, and they were far from it.

They were limited to 50% capacity, which would still roughly be 59,000 people.

And they massively increased the ticketprices so nobody "normal" could afford them anymore.

I missed the part where it said the current contract runs out in 2024. But yeah probably not ideal to measure attendance with COVID restrictions in place, and people may not be as willing to attend. Still 16,000 does seem low.

Some comments from the site:

I have attended the Italian Grand Prix for 13 years now and this year I was really disappointed in the restrictions in place. The price of the tickets has priced 70% of fans out of attending the event, in a year where the pandemic made people redundant, looking to earn a living, Monza decided to increase the ticket price and get rid of general admission. No wonder people didn't attend.

When you take into consideration the amount of tests I needed to do to get a ticket and be allowed into the circuit, to then be told you can't walk around other parts of the circuit, stand on any grass area (which would be safer away from any crowd). Felt like daylight robbery, to pay £300+ for a Sunday ticket to be herded into one area was a big ask. For the 16,000 fans that attended Sunday, I'm sure my view isn't alone.

Even if more people attended, the 'Fanzone' was massively under equipped to take in any more fans, with only two very small places to get food and one place to buy a drink (which only served beer and water) if you didn't want either, you'd have to go without.

This event almost seemed rushed together, the Tifosi that I met and the fans in the stand are as passionate as ever for the sport and knew loads of people who wanted to attend but were unable to. Formula 1 I'm afraid got this one wrong and with a few tweaks, could've been amazing and that to rival any Grand Prix this year.

I hope they put things right next year. Despite my disappointment, I will be back as the last 12 years have been amazing and a real highlight of my year and its never disappointed.

Once again, one thing goes wrong and Formula 1 and the FIA make a knee jerk reaction rather than looking inward and making changes they should've made. It's not the fans fault.
Click to expand...

I was there. It was down to a few things.


1. The pandemic, clearly not as many people travelling for the F1.

2. No podium / track celebration access, I spoke to some people from Monza who said they only go cause of the wild podium celebrations which were banned this year due to C19.

3. Only seating areas, the removal of nearly all grass areas meant the social aspect was lost for many.

4. Prices. We are in a pandemic, Italy is not an overly rich country at the momeny, the lowest price for a weekend ticket was 160€. Anything other than General Admission was well over 300-400€. So prices must come down. You need to resist the temptation to increase prices to make up a year's lost revenue as this is non feasible for spectators to cough up over 150€ for a ticket!

To say Monza is not a popular event is very unfair, we've had other races with less supporters and tbh audience numbers will take a while to recover regardless....
Click to expand...

That said, contracts held by Monaco, Austin and Abu Dhabi expire/d this year, as does Singapore’s deal.
Click to expand...

Hopefully Austin is picked up. It sold out in 2019 on the weekend of the event, and Sunday this year is already sold out.

Great for the MotoGP. Not sure these F1 cars would be particularly racey but perhaps it'll just be a fun watch for its difficulty.

MagpieRacer
Great for the MotoGP. Not sure these F1 cars would be particularly racey but perhaps it'll just be a fun watch for its difficulty.
Click to expand...

Or it'll be a two hour parade lap because no one wants to take chances on an unfamiliar track at the end of the season. I guess we'll have to wait and see though.

I was just thinking that looks a lot like a track that was designed with motorcycles in mind, though. Just the overall flow of it seems like it would suit that form of racing very well.

There is not the slightest chance of anyone getting within DRS range on a twisty circuit like that.

EngieDiesel
Or it'll be a two hour parade lap because no one wants to take chances on an unfamiliar track at the end of the season. I guess we'll have to wait and see though.

I was just thinking that looks a lot like a track that was designed with motorcycles in mind, though. Just the overall flow of it seems like it would suit that form of racing very well.
Click to expand...

Yeah its almost exclusively used by motorbikes for both MotoGP and WSB. Though touring cars and GP2 (Asia series) have both raced there. Sergio Perez in fact raced, and won, in 2009 on this circuit and is the only current driver I believe who has driven the circuit.