Round #5 is now finished, 24 drivers have completed the rally from 26 starters.

Catarina Alexandra has won the R2 Class by 5th time in a row. Since she has changed to Toyota GR Yaris, she has won every single rally round in R2 Class so far.
Troy Nettleton keeps being unbeatable in International Rally Cup for Youngtimer Cars and has also scored his first point of the season on Overall Championship Standings by finishing 10th overall. 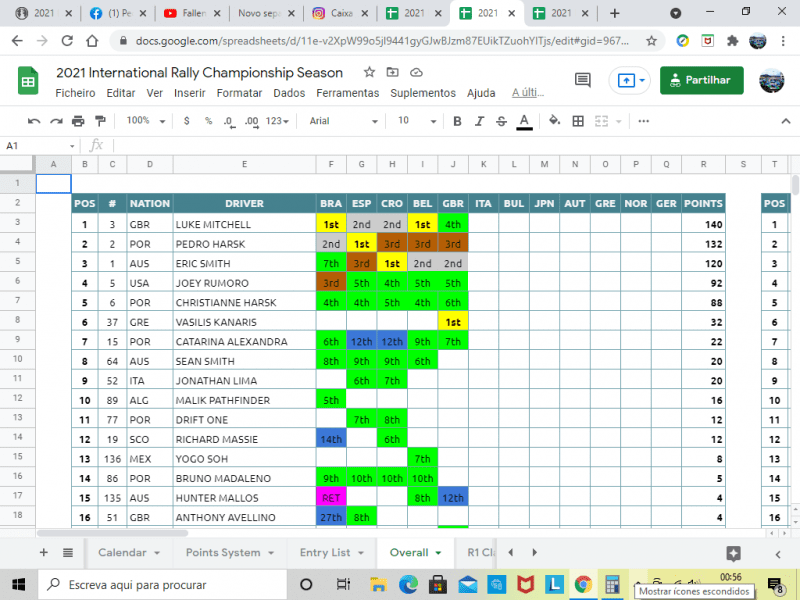 Next round is the Rally Italy, which will be in the same track, but in a different direction: Forward instead of Reverse layout! The rally will be 5 laps long and it is set to start at 14th June and end at 20th June.

Round #5 starts in this monday with Rally UK and it will be the 3nd gravel round of the season!
The track for this rally will be the same track as Round #4, but in a reverse direction. The rally is also set to 5 laps long!

The Rally Organisation is looking forward to see you on the track for Round #6.

Here are the Round #6 results and Standings after Round #6 as they follows: 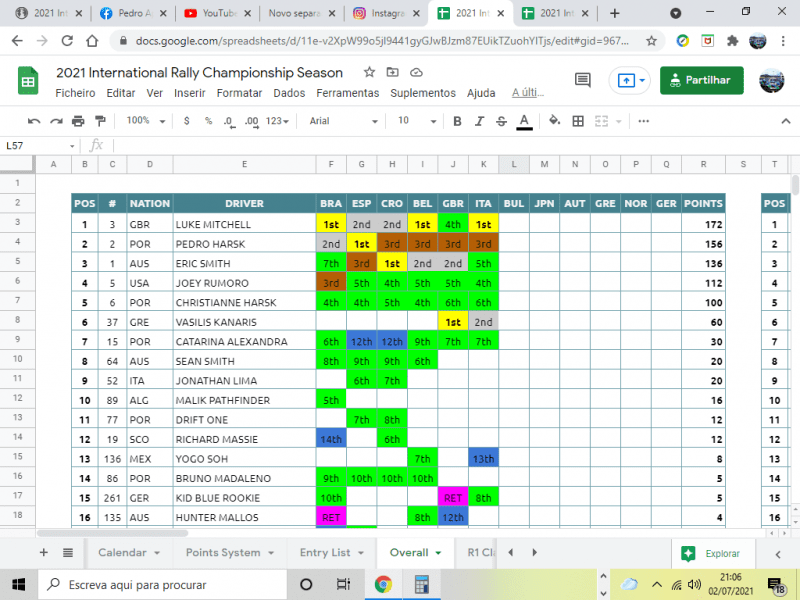 With this, the next round will be the Rally Bulgaria, the 4th Asphalt Rally of the season, which will go ahead on 12-18 July.

Round #7 starts tommorrow on Sardegna Type A track with the rally being 4 laps long.

Round #7 from Rally Bulgaria saw @Harsk100 emerging as a rally winner. With this, this is the 2nd victory of the season for the portuguese driver, who also reduces the championship gap to 8 points behind @epic_apri_39. 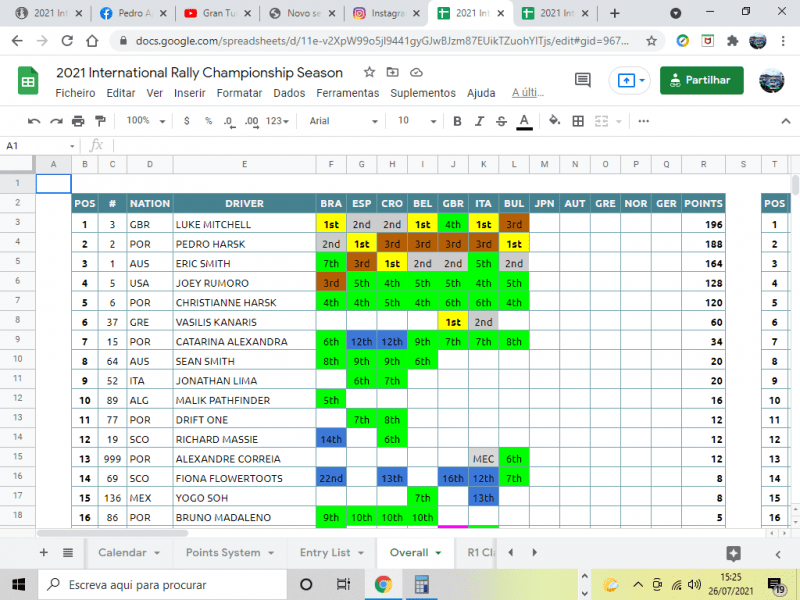 Next round is the Japanese Rally, which will be live on 9-15 August.

Round #8 is finished, Mitsubishi achieves the 2nd victory of the season with Vasilis Kanaris. 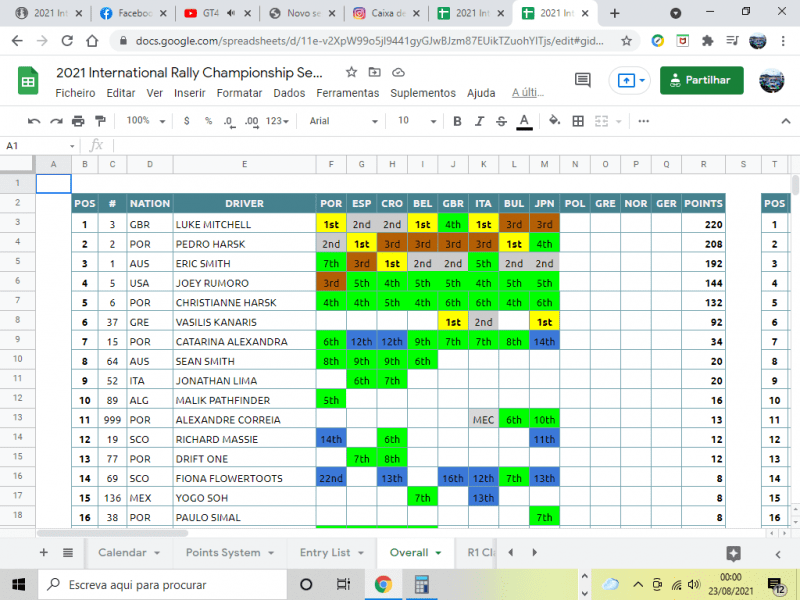 Next Round is Rally Poland at 13-17 September.

Round #9 starts tommorrow on Fisherman's Ranch Reverse track with the rally being 2 laps long.

Here are the Round #9 results from Rally Poland. @ElementRacer gets the 2nd victory of the season and the 4th win for Peugeot. With this, Eric Smith is now only 4 points behind Pedro Harsk on the battle for 2nd place. 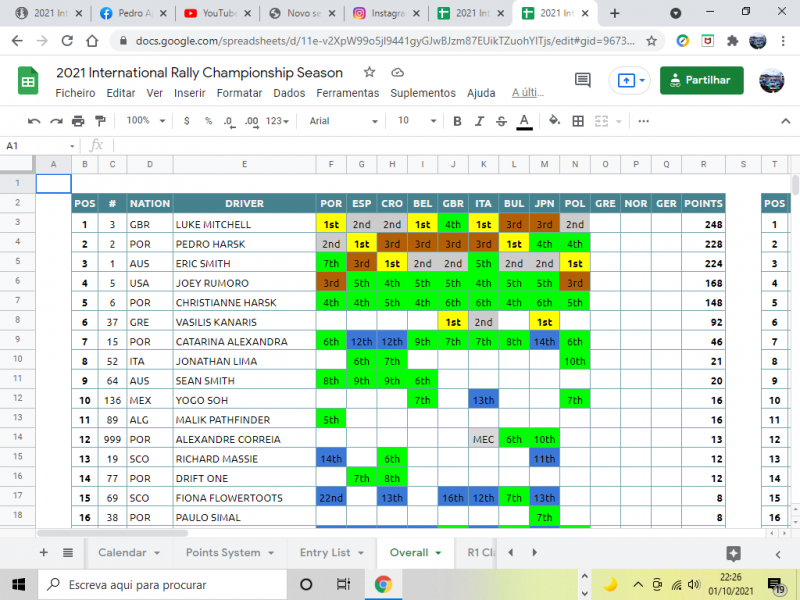 Next Round is Rally Greece in Sardegna Windmils Forward, 3 laps at 11-17 October.

Round #10 starts tommorrow on Sardegna Windmills Forward track with the rally being 3 laps long.

The Rally Organisation is looking forward to see you on the track for Round #10.

Round #10 sees @epic_apri_39 winning the Rally Greece, making the 5th win of the season for Peugeot. Here are the results and standings, as it follows: 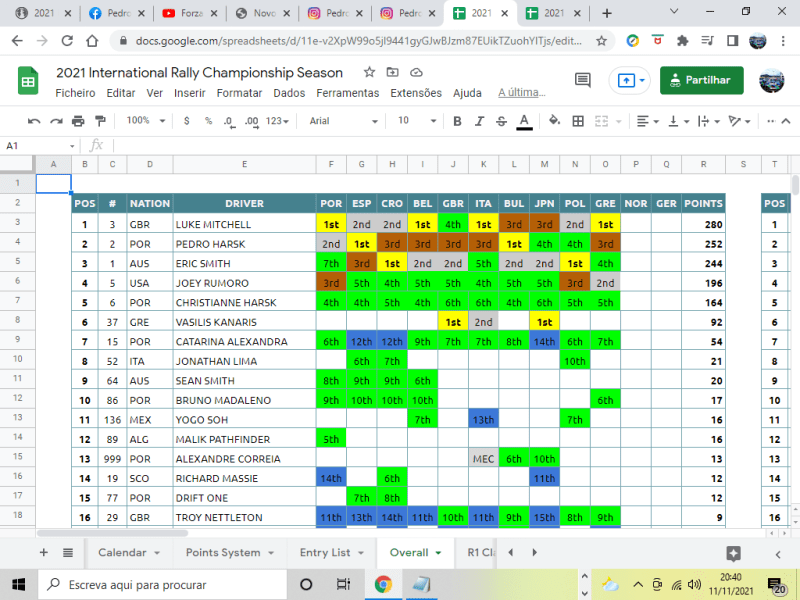 Next Round is in Rally Norway next week. The track is Fisherman's Ranch Forward and it will be 2 Laps Long.
It will also be part of Rally Trophy - Little Christmas Cup 2021 as well. Hi everyone! Welcome to the 4th edition of Rally Trophy - Little Christmas Cup. Since its creation in 2015, The Rally Trophy has been used as IRC pre-season test, although there was no Rally Trophy in 2016, 2017 and 2018, returning in full force in 2019. This idea of creating a rally series...

The Rally will be Fisherman's Ranch, 2 Laps. Luke Mitchell and Peugeot might be the International Rally Champions this round with one Round remaining! For this to happen, all he needs to do is to finish ahead of Pedro Harsk and Eric Smith. If this happens, Luke Mitchell will become the second british driver to win the International Rally Championship since 2017 (the first british driver to win overall Championship was Michael Bearpark).

Sunday Harsk has won back-to-back titles in R4 Class with two rounds remaining and equalizes Sami Saukkonen in number of titles in R4 Class. The same has happened to Troy Nettleton, as he becomes the second british driver to win Independents Cup a month after he had won International Rally Cup for Youngtimer Cars.

Catarina Alexandra is almost R2 Class Champion: All she needs is to be 33 points ahead of Troy Nettleton in Standings after Round #11 to stop Subaru from winning R2 Class. If done, she will become the first driver ever to win two R2 Class titles in a row.

The Organisation is looking forward to see you on the track for Round #11.

The Standings after Round #11 will come soon. 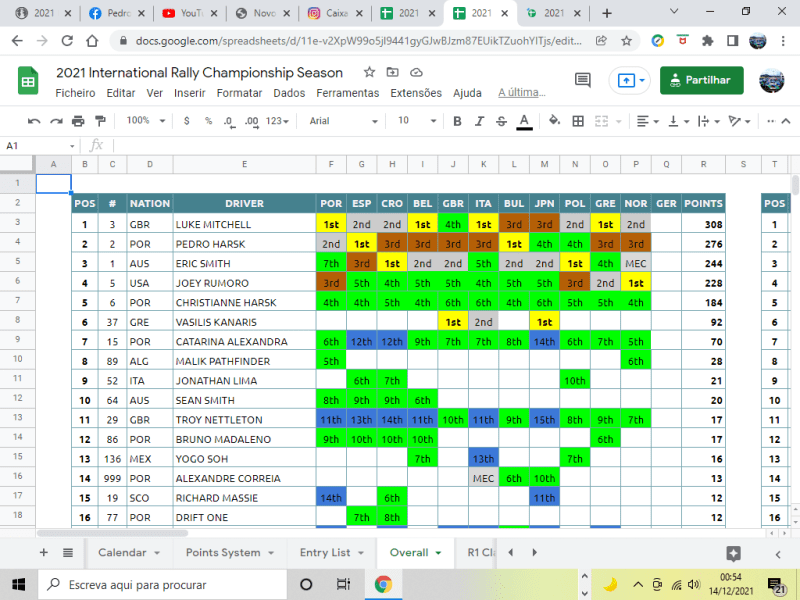 Final Round of 2021 International Rally Championship will go ahead tommorrow. It will be on Nurburgring 24h layout and the rally will be 1 lap long.

The Rally will be valid for both IRC, Rally Trophy - Little Christmas Cup, International Rally Sprint Series and will also be valid for Time Trial Cup points.

The Rally Organisation is looking forward to see you on the track for the final round!

Here it is guys, the final Round results and Official Standings.

Luke Mitchell @epic_apri_39 is 2021 International Rally Champion. After a great season where he achieved 4 wins this season, he became 2nd british driver to acheive this feat, the first doing so was Michael Bearpark in 2017. This is also the first manufacturers title for Peugeot and the second Team title for Speed Demon Motorsports.

Catarina Alexandra wins the second consecutive title in R2 Class with her Toyota GR Yaris RZ dominating the season by winning all rounds on its class;
Nuno Santos wins the 2nd consecutive R3 Class title, which is also the 3rd title of his career. He also wins International Historic Rally Cup;
Sunday Harsk wins R4 Class title for the second time in a row. His Abarth 500 won all rounds on its class!

The season has ended with Vasilis Kanaris winning the final round, becoming the 2nd Greek to achieve the victory in the final round, with the first driver doing so was Giannis Zografinis. Unfortunately, the 2020 IRC Champion, Eric Smith, wasn't able to attend the final round of the season.

Thanks John! For you too.