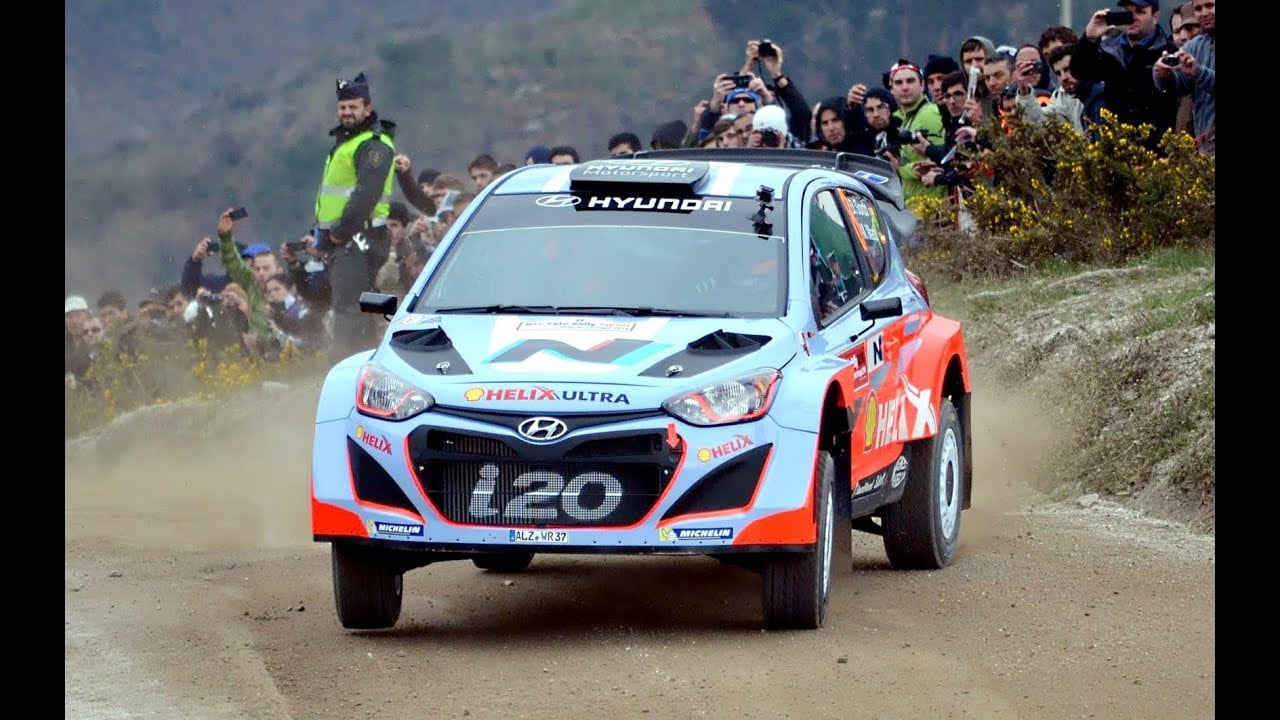 Hi everyone! Welcome to the first ever of International Rally Sprint Series.
We are looking forward to having an another season of the Rally Championship! This idea of creating a rally series started when I was competing into a rallycross championship on GT6. That took me to host a WRC championship, however, seeing that it was complicated, it ended on being a failure. But while my old PS3 was broken and that I was still waiting for a new one, I already was planning to revive the idea of doing my rally championship and make it sucessfull, as there aren't very much rally championships which are sucessfull.
In September 2017, Pedro Harsk has stepped down as a GORO steward which ended the cooperation between GORO and GRC. As a result, the Rally Senegal was the last GT6 Rally Round under the banner.
Since then, it became International Rally Championship from 2018 onwards and it was also moved to Gran Turismo Sport on PS4.

Unlike IRC, this is a Rally Championship which all Rounds (6 Gravel Rounds and 6 Asphalt Rounds) will be only 1 lap long and it will also allow more freedom on Car Selection.

The Rally Sprint Series will not allow any Race Cars, nor the Tomahawks, nor the Red Bull's.

1.4- The Sporting Regulations document are not definitive, therefore, they are sujected to the change at any time, for any reason.
2.1.1- The championship will have 12 rounds, meaning: 6 gravel tracks and 6 asphalt tracks.

2.1.4- The Rally Event's deadline may be extended for 1 or more days if there are not enough finishers for the rally events or then if there were issues such as Technical Difficulties.
2.2.1- There will be selected tracks during the season for each rally event.

2.2.3- Before the participants do the rally, they will be given a number of laps practise, meaning: One Practice Lap, One Timed Lap.

2.2.6- All drivers, who had started the “Race Event” in order to set the best lap time for each special stage, must save the replay, so the Series Organizers can add the lap times.

2.2.8- To be classified, a driver must complete the required number laps for each rally.

2.2.9- If you get disconnected during the rally, it will be classified as “Retirement”. They will be considered as a Mechanical Failures and they are unfortunate.

2.2.10- The drivers, who already have done their runs and submitted their lap times, are not allowed to submit new lap times. Doing that will result a warning or a penalty, depending of how many positions you have gained.

2.2.12- After the participants have submitted their lap times, they are not allowed to submit the new lap times. Ignore this rule will result a penalty.
3.1- The point system in the International Rally Championship will be as it follows: 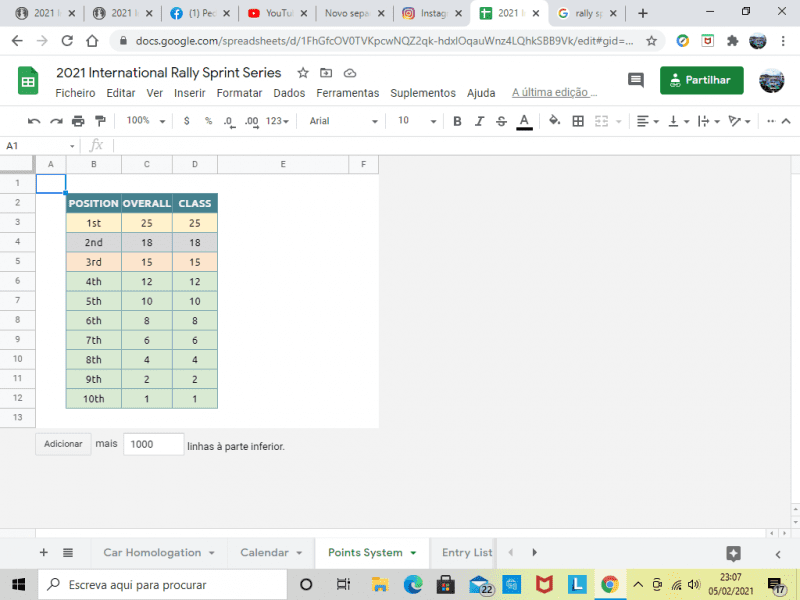 3.2- Drivers who retire or finish outside of top 10 in a rally round will not score points. However, unlike IRC, a driver, even finishing outside of Top-10, can score points depending of the class.
Here's an example:

3.3- If you quit from the rally round without telling us the reason, it will be considered as “Rage Quit” and you will not get any points.

3.4- Unlike IRC, The bonus points for finishing on top-10 in class will be awarded for Overall Championship.

3.5- There will be a Countries and a Manufacturer's championship and the points will be accumulative, with the drivers's points from each manufacturer/country combined.
4.1- The driver with the most points for the season will be crowned [2021 INTERNATIONAL RALLY SPRINT SERIES DRIVER/MANUFACTURER/TEAM/COUNTRY].

4.4- If the two drivers have finished the championship with the same number of points and if they are on the same teams, they will be crowned as champions.
5.1- To sign-up, a driver needs to complete the following form. Here's my sign-up for 2021 International Rally Championship:

5.2- The numbers choices (#) are now free to choose, but the number #1 can only be used by last year's Series champion.

5.8- Entries will be reviewed after the 2021 International Rally Sprint Series has been completed, for the next season.

5.9- Lobbies will be private, however some of them might be Public in order to have more drivers for 2021 IRSS.

6.0- Drivers competing on IRC are not obligated to take part on IRSS Championship, but they can participate, if they wish so.
6.1- Liveries can be done, as long as it doesn't breach the Community Guidelines;

6.2- IRC Logo is mandatory only for the IRC Classes R1, R2, R3, R4 and TT. Failure to do so will result an automatic exclusion from the rally round.

6.3- The Obscene and Inappropriate Liveries are prohibited on IRSS and will be automatically punished with race bans or penalties, depending of the severity.

6.4- No Tobacco and no Alcohol advertising is allowed for IRSS. Anyone being caught with it will be penalized. (Sadly it is necessary as it considered inappropriate by Polyphony Digital)

6.5- Each IRC Car Livery must have a respective Class Logo in it. Failure on Doing it will result an automatic exclusion from a rally round. The cars outside of IRC Regulations competing on IRSS do not need a Class logo, as long as they meet the specification requirements.

6.6- There are no Number Font Type restrictions for the liveries.

6.7- For more informations, see the Livery IRC Liveries examples for each car.
7.1- The drivers, who do not adhere to the Sporting Regulations, may be punished with penalties, point losses and even, with round bans.

7.2- If a driver feels agravatted with the incident which happened during the rally, he must send a Private message to the Series Organiser (Harsk100) by PSN message or then by GTPlanet Private Conversation facility, so the Organisation can check the incident.

7.3- After the incident has been checked, the penalty will be discussed. Penalties will be given by the following situations:

7.3.1- Ghosting (pressing “START” button) to avoid damage is extremly forbidden and the penalties will be given if this incident happens.

7.3.2- Insulting, crictising, making racism and making fun of the drivers is disrespectfull and it will be considered as “Injury of Reputation and Honor”.

7.3.3- Bringing a overpowered car or going with a wrong car will not be counted towards 2021 IRSS Standings and it will be awarded with a automatic exclusion from a rally round if it is found.

7.3.4- A driver may be disqualified from a rally event if he accumulates excessive penalty.

7.3.5- Repeated Violation of the rules will be considered as “Breaching the Sporting Regulations” and may result on the ban for the rest of the season.

1.2- The 2021 IRSS Calendar is always sujected to the change, at anytime and for any reason!

1.3- The Final Round of 2021 IRSS is also valid for both IRC points and 2021 Rally Trophy - Little Christmas Cup points.

Tagging some people, in case if they are interested.

1.2- The R1 Class consists on all Gr. B Rally Cars, including the Audi quattro S1 Pikes Peak '87 and Peugeot RCZ Gr. B Rally Car. Tuning is allowed, as long as they reach the Power and Kg Limited, as per Regulations.

1.3- If you Race with the wrong Specs, you will be disqualified from the Rally. However, if the drivers take part with less power and/or more weight than regulated in a round, they are free to do so.

1.4- No Tomahawk Vision GT, Race Cars and Red Bulls will be allowed to compete on IRSS and will therefore result an automatic exclusion from the rally round.

Round #1 starts tommorrow at Rally Australia. Keep in mind that this is a series similar to IRC and the Rally Trophy - Little Christmas Cup, but the difference is that the rallies are only 1 lap long.

The Organisation is looking forward to see you on the track.

I will join Harsk, are you hosting?

John Wells
I will join Harsk, are you hosting?

Yes, I will be hosting.

Round #1 results are now posted!

Championship standings after Round #1: 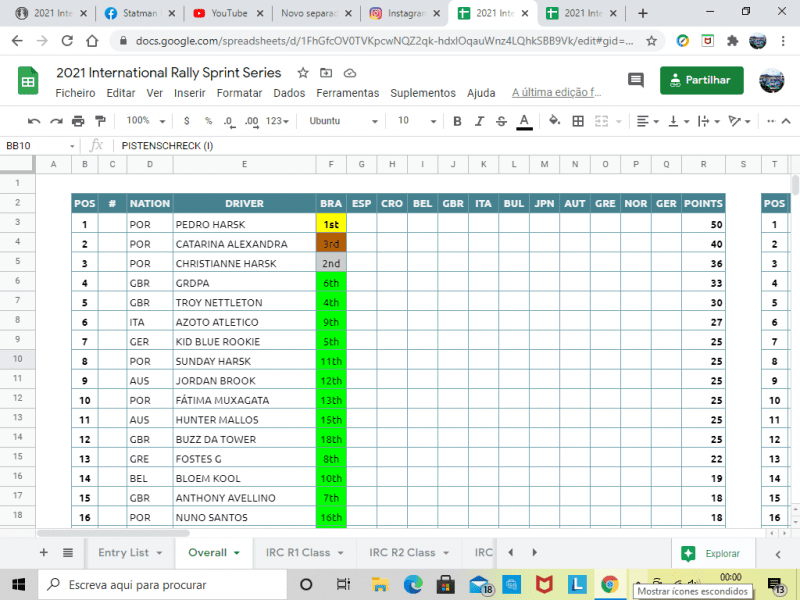 Next round is the Rally of Brazil at Colorado Springs. It was supposed to start today, but due to an miscalculation of the time, the rally start has been postponed to tommorrow (8th March).

The Organisation is looking forward to see you on the track on Round #2.

Round #2 is now finished and the results and championship standings are as it follows: 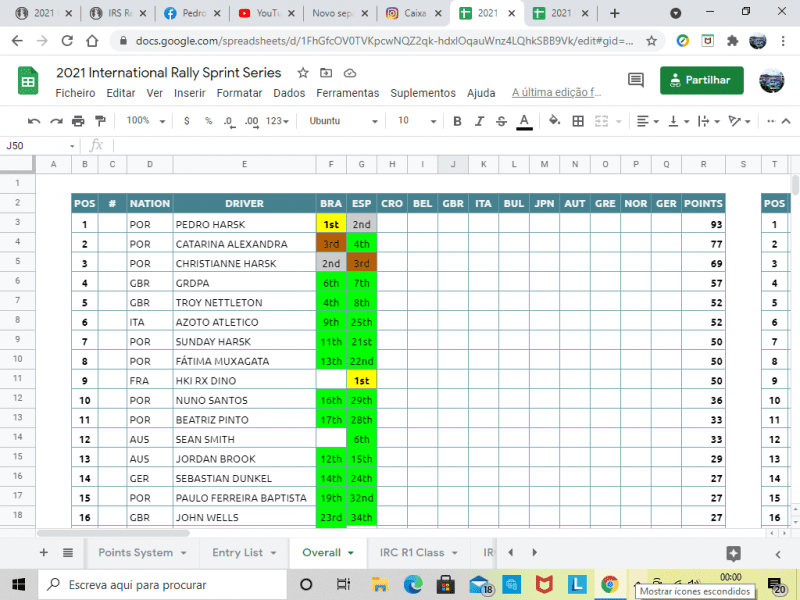 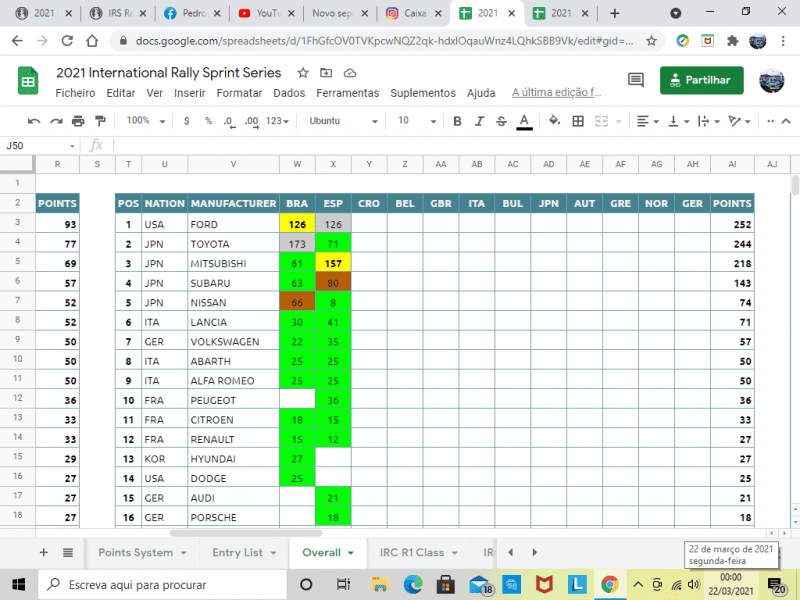 Keep in mind that unlike IRC, the manufacturers, countries, teams and tires championship points are accumulative, unlike IRC.

Round #2 also sees the Mitsubishi's first win ever on IRSS, although that the Lancer Evo hasn't registered a single IRC win yet.

Next round is Rally of Switzerland which will be live on 12-18 April.

Round #3 from Rally Switzerland is now live!

Here are Round #3 results and standings as it follows: 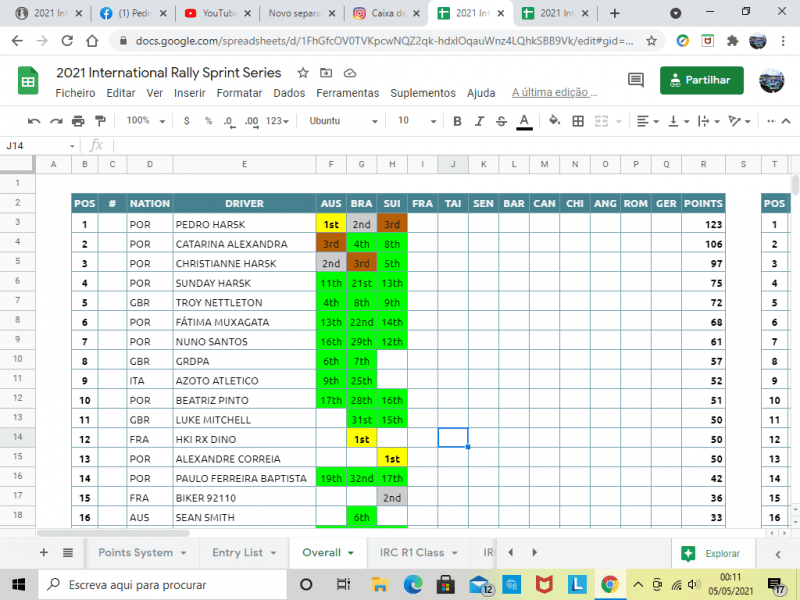 Next round is Rally of France, which will be starting at 17-23 May.

Round #4 is now live everyone.

Apologies for posting too late!

Round #5 is now live, everyone.

Sorry for not posting the standings lately, I have been a little more busy than usual. Standings after Round #4 will be posted soon. 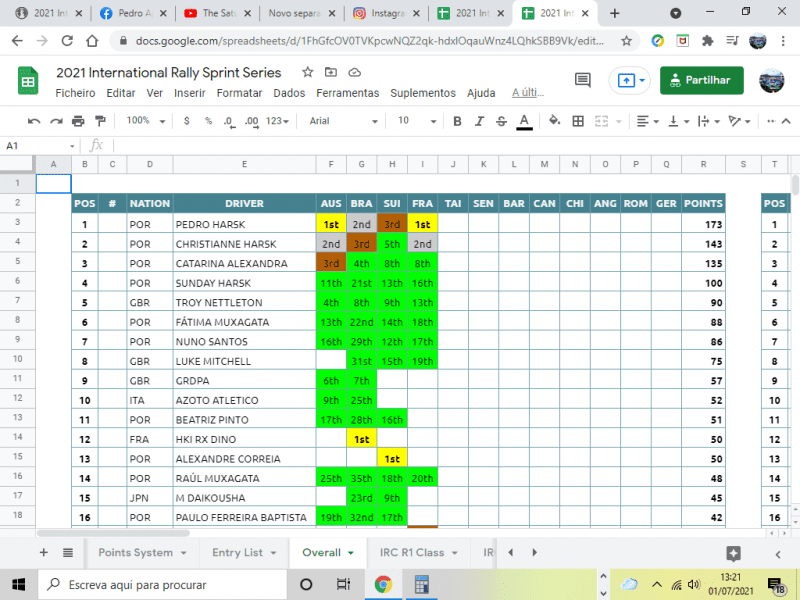 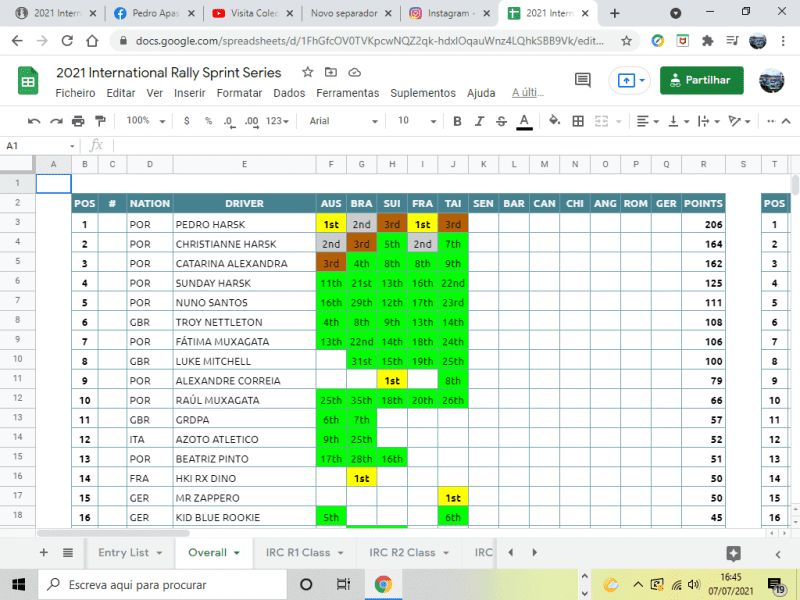 Next Round is Rally of Senegal at 19-25 July in Sardegna Forward.

Round #6 is now live, everyone.

Here are the results and standings after Round #6. 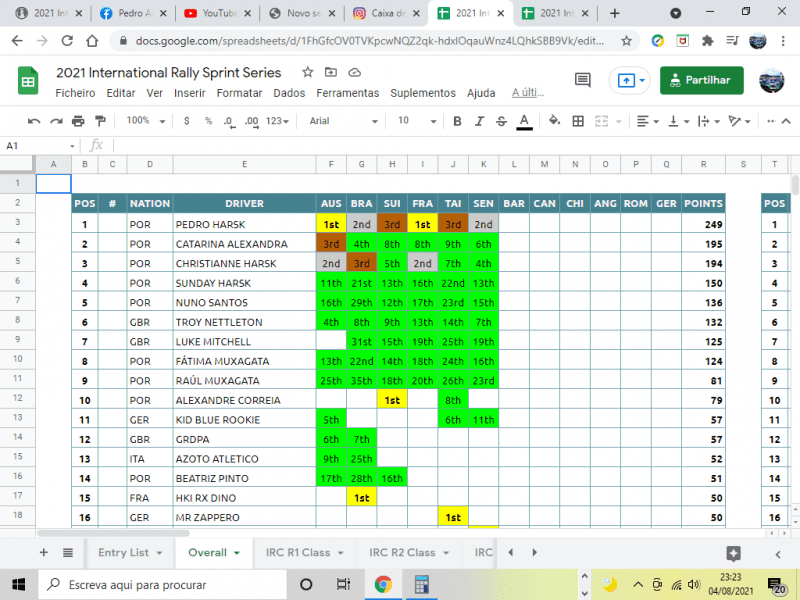 Next Round is Rally Barbados on Blue Moon Bay Speedway: Interior A track. The rally will be live on 16-22 August.

X50 wins Round #5 on his Subaru WRX STi Gr. B rally car, becoming the first driver from Cyprus to win a rally in IRSS history. 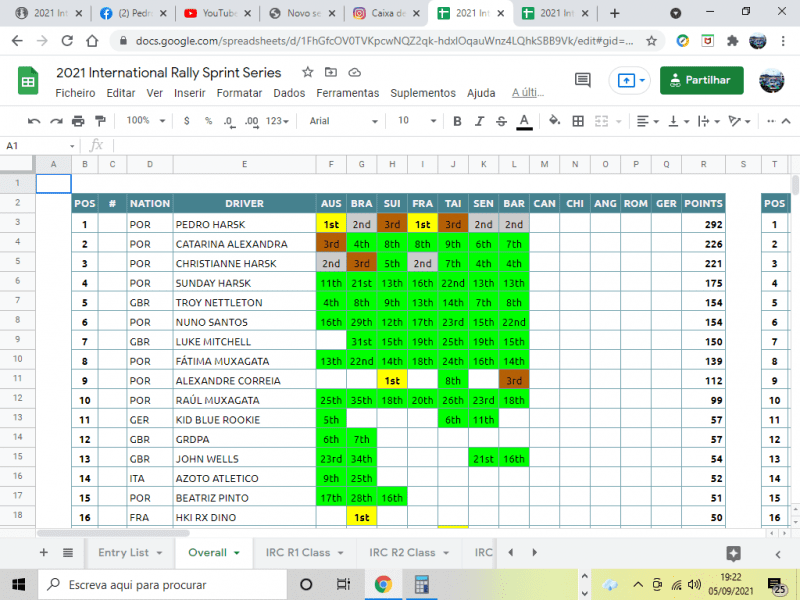 Next round is Canadian Rally in 16-22 September.

Round #8 is now live on Circuit de Sainte-Croix - Layout B.

Round #8 sees the 3rd victory for Subaru. 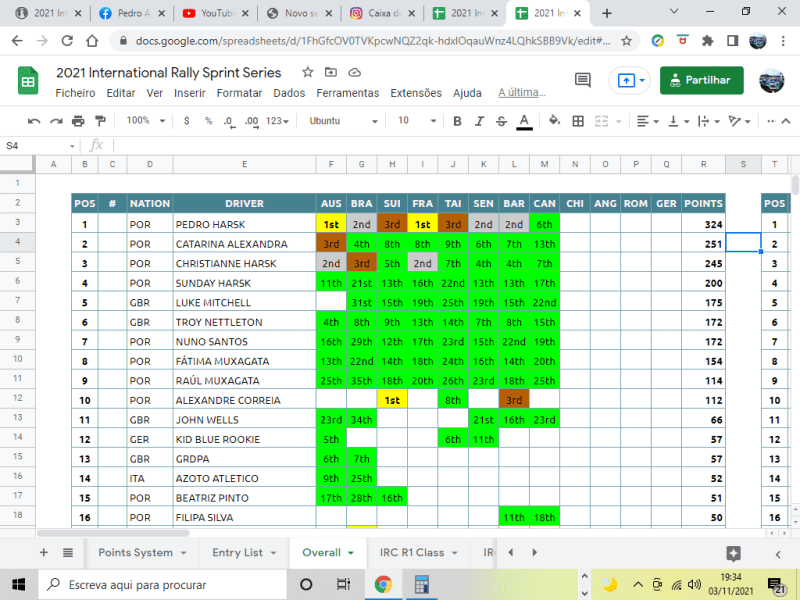 Here are Round #9 results and Standings as it follows: 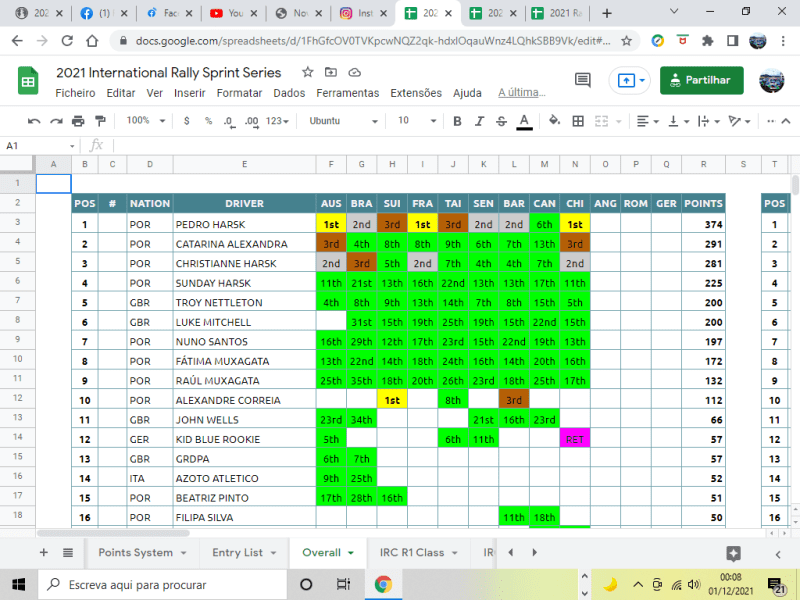 Next two rounds will be part from Rally Trophy - Little Christmas Cup, both on BB Raceway and Fisherman's Ranch.

Here are Round #10 results and Standings as it follows: 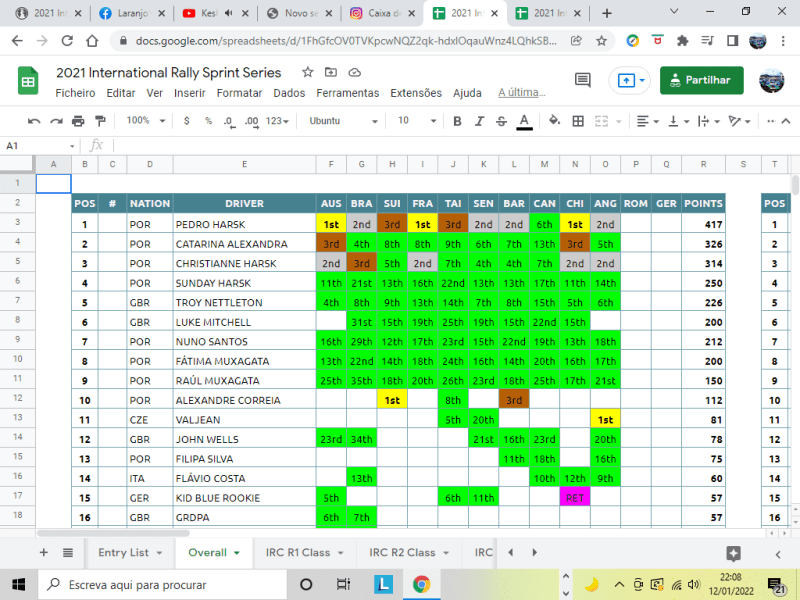 Sorry for delay on the standings, I have been too busy.