Sonygamer455
So are you saying they become weaker when they start running? (I am not sure I understand) I know on Der Riese in Black Ops they don't die as easily because I was struggling to kill them just recently due to how fast they move and they didn't go down easy after several hits. The Giant however, it seems like only one bullet or two from the Kuda kills them instantly.

Yea I think they are slightly different variants of the hounds because they do that, they move faster than normal hounds and they appear to be skinnier as well. (Which probably explains why they move a lot faster) I need to go into Theater Mode and look at them more closely.
Click to expand...

One thing that I sort of didn't like with these so called new hell hounds variant that you like to call it which doesn't bother me at all though was the fact that they remove that Beauty of Annihilation guitar solo bit that plays after clearing out all the hell hounds. Cmon I actually liked it, plus Beauty of Annihilation is a really good Easter egg song. The remix on the Giant was alright but the original is better.

Right now I've been mostly playing multiplayer as I'm trying to finish the dark matter challenge. Only have 4 weapon classes to get diamond for. Right now on my last sniper for the sniper class *on the SVG 100 right now* and getting gold on these guns are dreadful. Heck even some of the pros at CoD that has good K/Ds even admits it's a hellish process. The P06 wasn't as bad as everyone thinks it is. Even though it needs to charge before firing the bullets, the gun already does massive damage to begin with, plus 3 round bursts that's something you can't go wrong with.

For people who are having a struggle with getting blood thirsties for the snipers because their aiming is bad, I'd recommend camp near a window or whatever spot you can find that may help and lower the horizontal aiming sensitivity to 3 and pray that you can get 5 kills in a row without being flanked from behind. It would be a good idea to use sixth sense but the fact that your aiming sensitivity is going to be really low, you might not be able to react fast enough if the enemy is coming from behind. Also don't forget about the silencers.

Fringe and Infection are great examples for sniping but I prefer infection more because I seem to have some bad luck with getting flanked on fringe especially when camping inside the barns and inside the white house as well, no pun intended. Plus I really like Infection's map design so yeah.

Many people would recommend to use shock charges and rejack *yes apparently rejack still counts towards challenge progression* etc. However I failed to acquire all of these after hitting prestige 2 and also for the rejack since it's usually the worst specialist ability yet up until hearing that it still works toward challenge progression but I think I can handle this without all of them.

I'm probably going to play secure and hold with the combat knife inside the houses on nuketown as its probably easier that way if you don't have 2 of the worst specialist abilities aka Rejack and camo although I think overdrive might help a bit too because of the speed boost. Enough said.
Last edited: Mar 7, 2016

I am sure within the next month or so they will be announcing the next COD.

I got the Marshall 16 and it seems a little op even without atachments at close range at least.

Also bought the new map pack and I am enjoying playing the new zombies map.

caseycar5
I got the Marshall 16 and it seems a little op even without atachments at close range at least.

Also bought the new map pack and I am enjoying playing the new zombies map.
Click to expand...

I'm trying to get the new Blackmarket weapons and haven't even gotten one yet. Honestly I really want the NX Shadow Claw because you can dual wield it which is awesome. 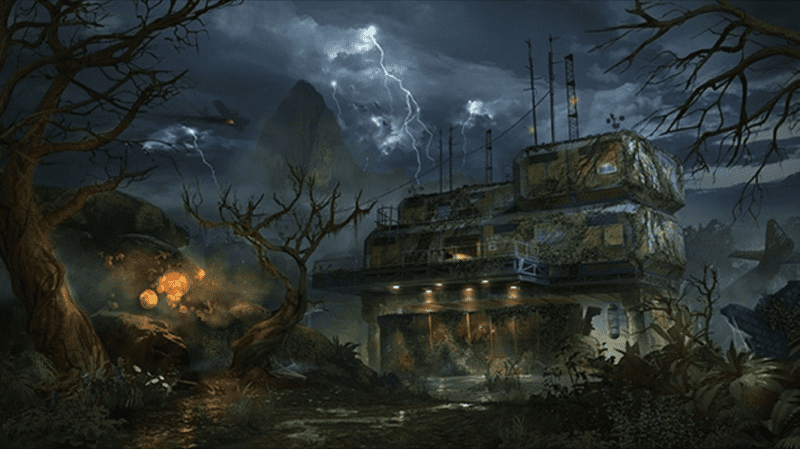 Apparently, the call of duty site accidentally leaked this and somehow, a user manage to find this image on there. How? I have no clue. But this map is looking pretty eerie. The Lightning strikes, the foggy mountain, and the dark atmosphere makes this map really good and thought out pretty well.

Also did I forgot to mention that this is pretty much the Pohnpeii / island map that everyone has been going crazy over? Yeah, according to the zombies storyline, Takeo mentions something about a island being plagued by some kind of fungus. Look at your left and it seems like there seems to be some kind of glowy fungus. Just thinking about this makes me think that the new wonder weapon is going to be based on the nomad's hive specialist weapon. Just like the previous zombies map how they have wonder weapons based on specialist weapons like the Ragnarok DG-4 *Gravity spikes* and the Wraith of the Ancients *Sparrow*. 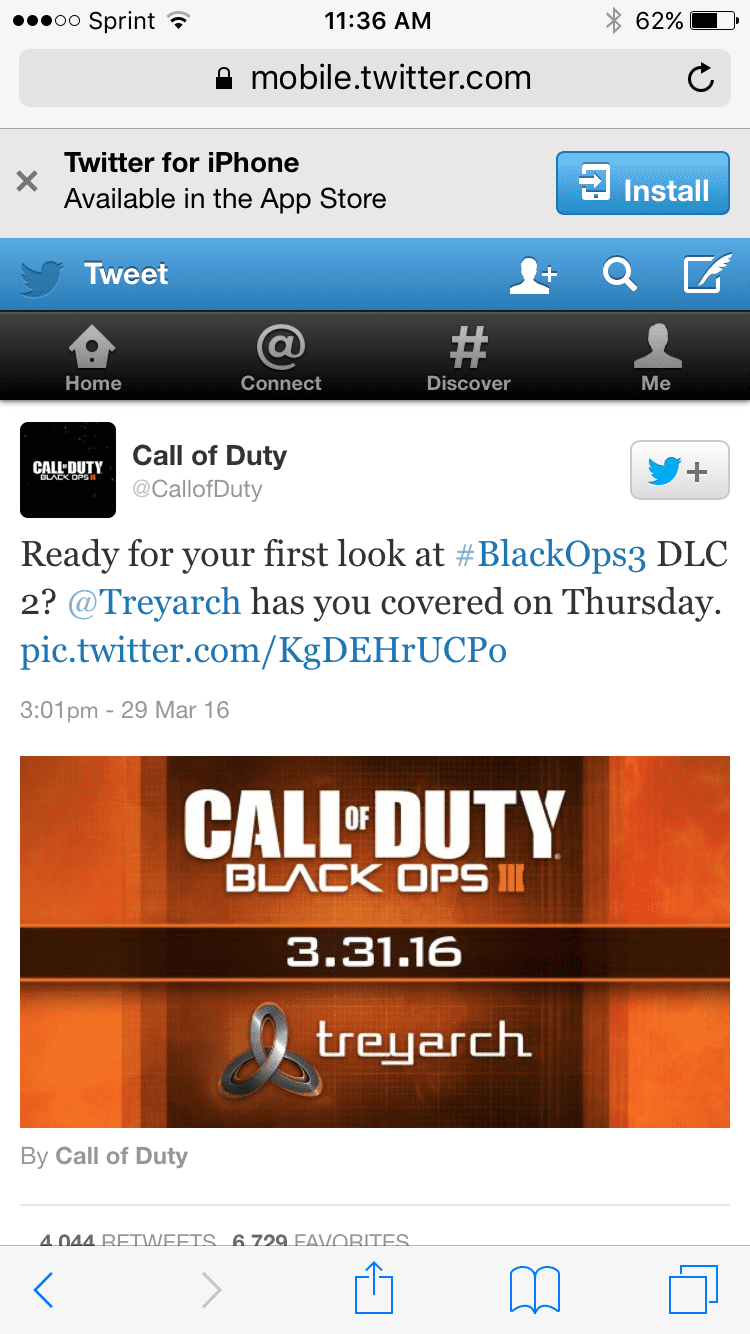 So i got this when i loaded up Black Ops 3 today. 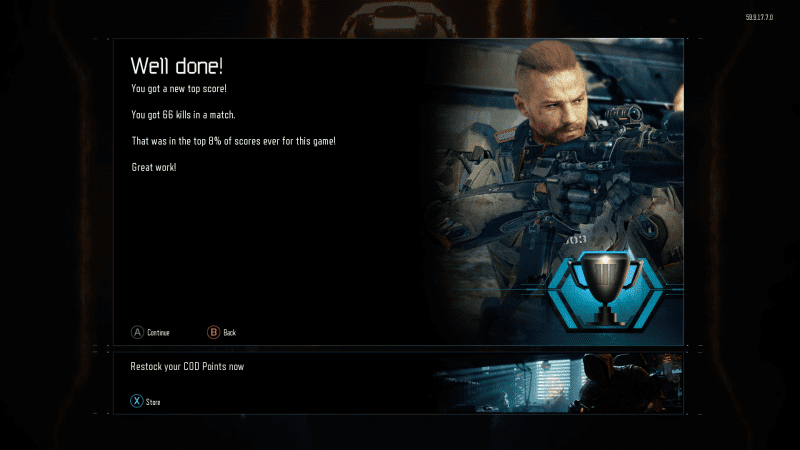 I freaking knewed it the new wonder weapon for Zetsubou No Shima is going to be based off the Hive Specialist Weapon! 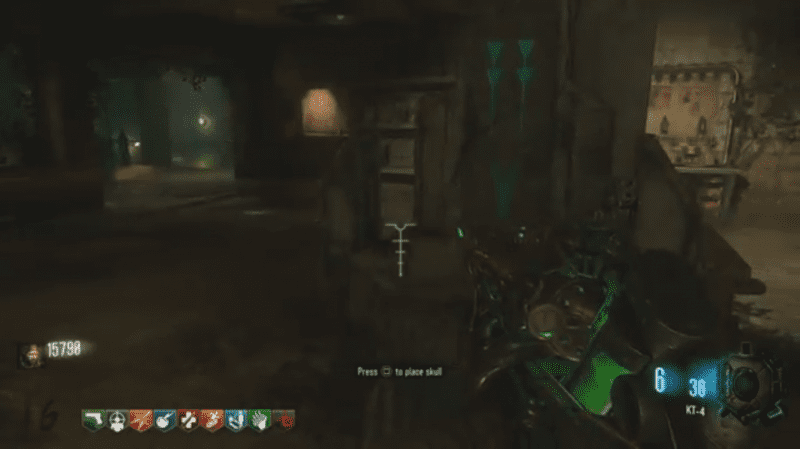 I'm not all that great at melee but I got the butterfly knife a few weeks ago in a common, I've spent $10 on CoD points and I think it's stupid to do so now that I've earned two weapons for free.

Speaking of that a lot of drama seems to be happening on YouTube and other places about this black market blackout.

Casey
I'm not all that great at melee but I got the butterfly knife a few weeks ago in a common, I've spent $10 on CoD points and I think it's stupid to do so now that I've earned two weapons for free.

Speaking of that a lot of drama seems to be happening on YouTube and other places about this black market blackout.
Click to expand...

Spending $100 to get new weapons is ridiculous. At least Zetsubou No Shima lets you use some of them for free.

Well just played Zetsubou No Shima a while ago and I have to say it's quite satisfying. I like it better than Der Eisendrache already. The looks of the map is kind of a slight throwback to Shi No Numa and Shang Gri La.

(Ironically I was playing Shi No Numa for a few hours last night and I played Shang Gri La not too long ago.)

Anyone up for some multiplayer? Watching the trailer of the next COD has ignited my urge to play COD again.

FAMAS aka Fear is in the game now, Few melee weapons one is called the Skull Splitter, I got the HG40 and the skull splitter, hoping to get the FEAR!

LvL 110 now in BO3, hoping I can hit 1000 before CoD 4 Remastered// IW comes out. I've gotten master prestige in every CoD before the next one comes out 👍

I notice that Treyarch sneak in some godly as hell metal music for multiplayer matches. Now if only this was about 100% of the game's OST.

Double XP This weekend through Monday, May 16th @ 10 A.M PDT

Double Weapon XP This weekend starting Today at 10 AM PST running through Monday at 10 A.M. PST

Anyone good want to get a team together on PS4? Trying to find a team so i can just record utter slaughter

Well, played the new zombie map Revelations just recently and it's a pretty amazing map! I love the aesthetics of it, probably the best I have ever seen in a zombie map. The map is so big, it's kind of overwhelming and truthfully it will take time for me to get used to it.

Gorod Krovi? Meh. The is "okay", but I didn't think it was all that interesting, I feel about the same for it as I did with Die Rise in Black Ops II. Then again, I feel like I am missing something interesting on that map and it could change how I feel about it much of the way the bow from Der Eisendrache did. I almost wish we had a DLC 5.