For most of the season, it's been a shaky time for Camyron Jackson. Marked either by a severe lack of pace or an unfortunate string of incidents catching him out, it has mostly been one to forget as only the opening race was where he had any competitiveness. In the last two races of the European leg, the two-time Formula 1 champion has seemed to have found his stride with both a stellar performance that saw him at the front and momentarily battling team boss Kunimitsu Kino****a at valkenburgh, followed by a slow and steady climb through the field in the final race at Eurospeedway, both resulting in top 5 finishes. "Really taking a step back, there was alot to grasp for me" said Jackson. "I was back from an injury and then having to adjust to a car that was less reliant on Aero so I was not at all really together for abit and that really showed in my race pace". When it comes to his performances in qualifying, Jackson chalks it up as another element he still has yet to put together. "I'm still kinda over driving it and I think some of that is me still trying to process the difference in downforce but whereas over a season In Formula 1 I could finally have it handled by the 6th race as it's mostly one single type of track, its hasn't been anywhere near the same in Champ car this season as I have to adjust from a natural terrain Road Course to a Mile 1/2 Oval to a Street Circuit and then to a Short track. It's been a tricky one to grasp and I am still trying to find that" As series begins its American tour, Jackson Hopes his recent uptick in pace will make up the difference as it's done the past two races. "I feel like my race pace is finally back so I think if I can keep that going and improve on it, I can start to make a more realistic bid for points in the championship. We've got the pace and the team and finally the luck, I just need to do more on my end along with having more of that luck to make it happen". 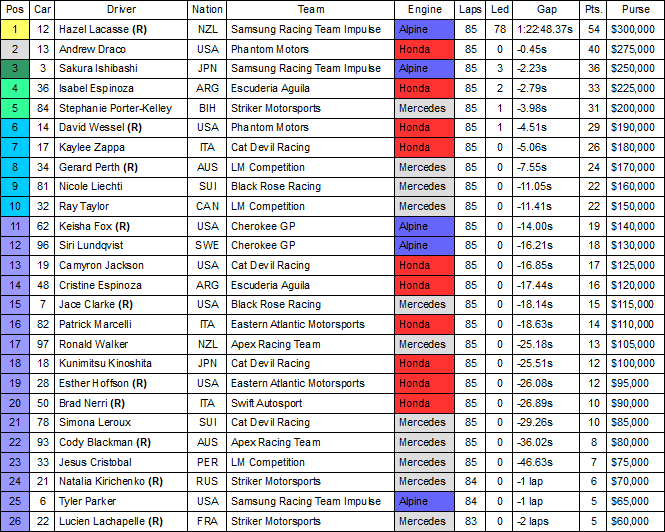 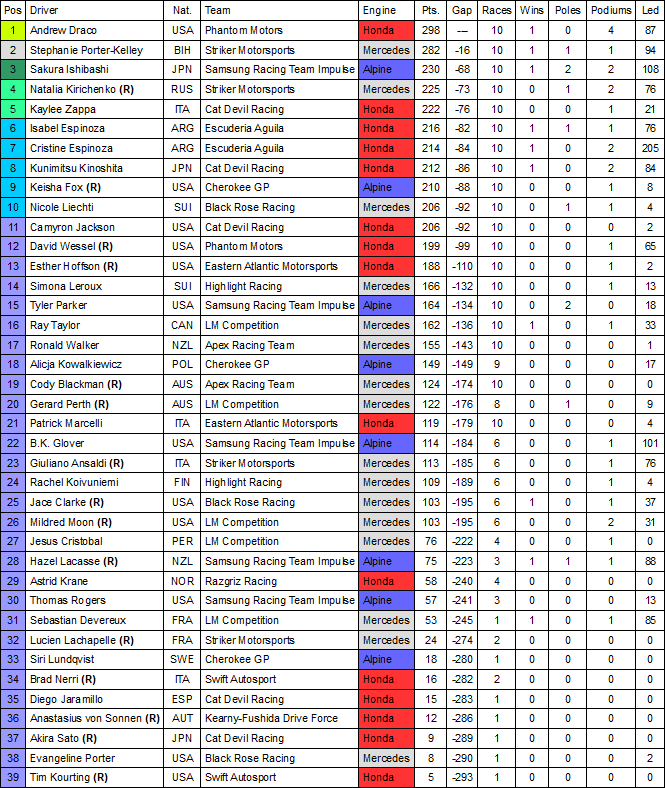 Toronto, Canada | After Saturday's qualifying, questions were in the air as to the expectations the team would have for the race. With the team finishing 11th and 12th, with Keisha Fox leading Siri Lundqvist to the line, the team see it as a success all around. For Fox, staying in front of the returning Lundqvist was job well done, gaining two spots from the start of the race to do so. For Lundqvist, her work was cut out for her as she gained seven positions to get to her 12th place finish ahead of Camyron Jackson, who she battled most of the last part of the race. "12th feels good after how yesterday went." Commented Lundqvist after the race. "I think I was faster than Keisha at the end, but it would have taken another round of pit stops to really put that to the test. Tires started to go away right at the end. All I can be is thankful to the team for giving me the opportunity to come back, to the sponsors for being so supportive this weekend. It felt nice getting into the fighting spirit. Can't wait for Detroit!"

Keisha Fox was similarly hopeful, stating "I think a top 10 was just out of reach today. The guys and girls up front were on a completely different level from the time we unloaded. Ray [Taylor] was fastest in each practice session, and he was who I was chasing for that last stint, and the gap was still too large despite me using full fuel at points. I really wasn't saving anything, but sometimes 11th is how it goes. Being able to hold off Siri was a nice feeling. But she's quick. I had lost track of her until I saw her in my mirror, and not gonna lie, I was anxious. But glad we finished where we did. Good rebound for the team, we needed this after losing Alicja in Lausitz. As a team we needed a calm, composed day and this was it."

KYOTO, JAPAN--Another large domino for Champ Car and it's 2021 silly season has fallen, with Cat Devil Racing confirming that Kaylee Zappa will not be returning with the team beyond the current season. Sources close to the situation are reporting that contract talks have broken down between the two, with Zappa asking for upwards of USD$1.25 million for her services, as well as preferred status within the team in regards to upgrades and improvements to the team's cars. The team has earned one win so far in 2020, with Kunimitsu Kino****a taking victory at the inaugural event in Valkenburg, as well as an additional podium at Motegi and a most laps led award at Phillip Island at the beginning of the season. Zappa, in comparison, only has one podium to her name, from Brno. The team has concluded that there are other drivers available that may be cheaper for equal capability on the market, and have ended their negotiations with the Italian driver, a bold move, but understandable given it has the likes of Diego Jaramillo, as well as CDR development talent Akira Sato on hand.

There will be four engine suppliers in Champ Car come next year. Chevrolet, who last competed in 2018, was a shocking absence to most when 2020's suppliers were announced, and General Motors have given an explanation why with the unveiling that they will be returning. "In the past, the formula was very specific. Run a twin turbo V6 engine. We all had the same defined areas. Horizon has changed that to allow us to sculpt our own engine for competition and we were behind the ball on it. Coming in a year later, we've had time to adjust to the new rules and make our powertrain right." Curiously, Chevrolet will be returning with a turbocharged V8 engine, the same powerplant used in the Corvette C8-R endurance racer, perhaps inspired by the potential Mercedes have shown with a naturally aspirated V8 engine.

2021 will see Chevrolet join Mercedes-Benz, Honda, and Alpine as engine suppliers among what could be an expanded full time grid of up to 28 entries outside of the Triple Crown events. 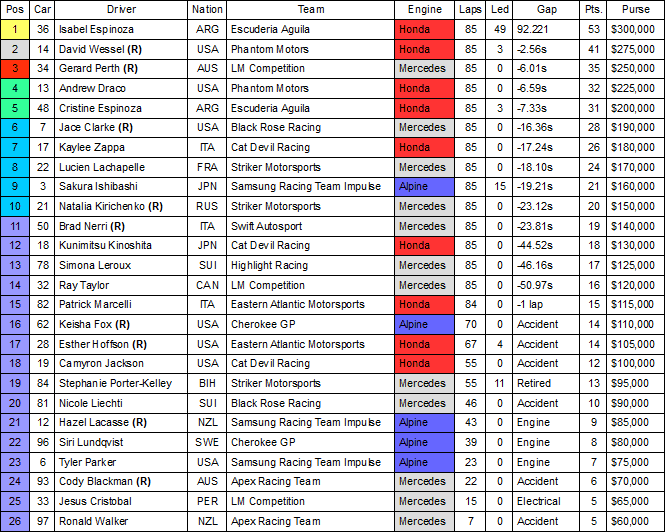 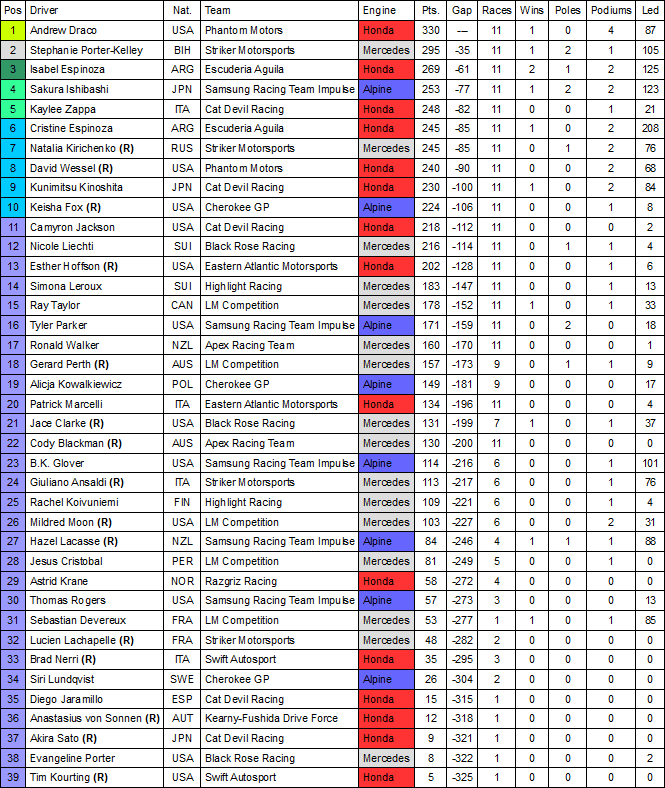 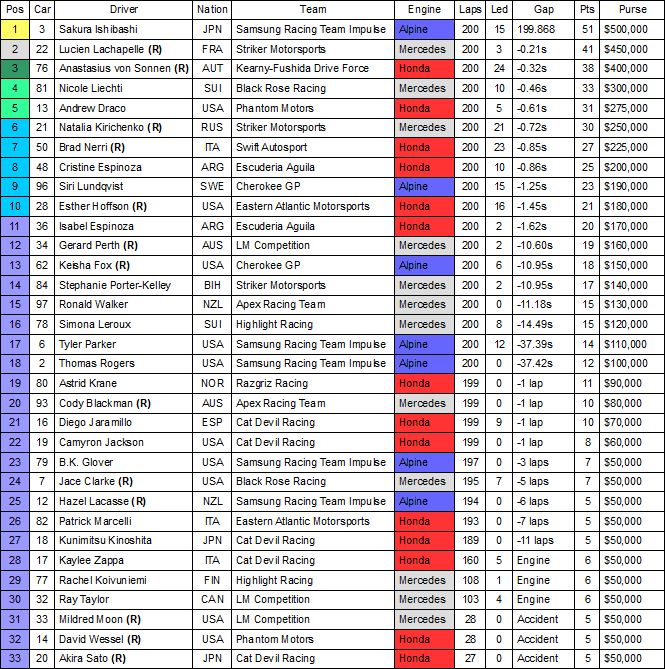 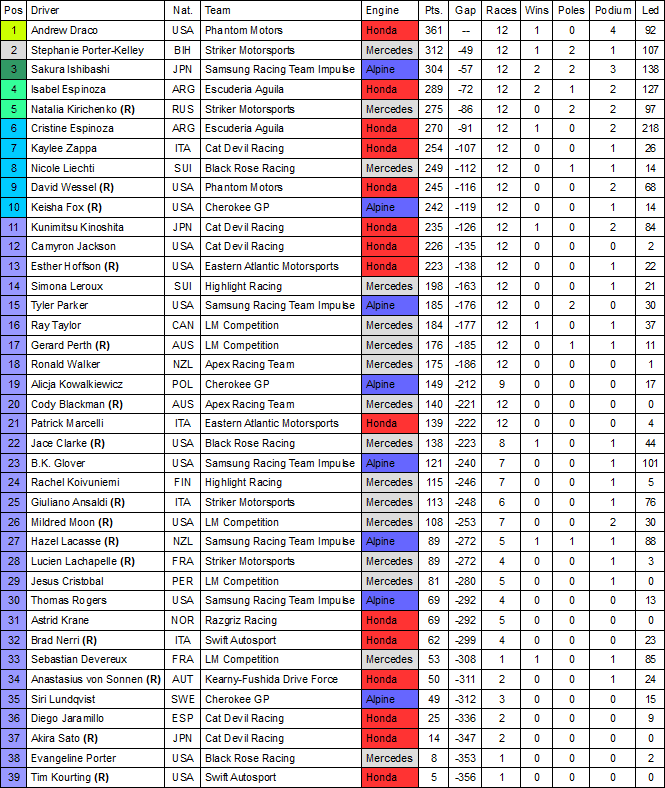 Sakura Ishibashi comes back to Champ Car victory lane for the second time in 2020, this time as a winner of a 500 mile race. The Pepsi 500 at Pocono Raceway featured a staggering amount of lead changes, 102 between 21 drivers, with Ishibashi keeping herself in contention the entire race to be able to make a pass on the last lap over rookie Anastasius von Sonnen to claim her second win of the season after winning in St. Petersburg. B.K. Glover made an assist on the last lap pass, holding von Sonnen in dirty air long enough for Ishibashi to make a pass out of turn 1. For Ishibashi, the win is a vindicating one, after developing what she called a phobia of the 500 mile races, something that developed back in 2016 in the now infamous Indianapolis 500 that claimed the life of Henna Venalainen. Speaking after collecting her Pepsi 500 trophy and USD$500,000 winner's purse, Ishibashi shared her thoughts; "This one was a long one to work for. I've been living in America for five years now, and I was terrified of these [500 mile] races until we had about 10 laps left in it. I lost my friend in my first ever race, and I've seen others lose their lives in these marquee races in that time frame. It's dangerous, but something clicked as we got close to the finish that made me want to push harder than I have here before. I now understand why the risk is worth it. I now understand why the Indianapolis 500 is the most sought after race in the world. I wouldn't trade my Le Mans win for anything in the world. But I think I now have a stronger need for an Indy 500 win than I did Le Mans."

Long Pond, Pennsylvania | A ninth place finish was what the doctor ordered for Siri Lundqvist, her best result since returning to the Champ Car World Series for the first time since the 2014 finale at Fontana. A 12th and a 22nd preceded her Pocono performance, in which she was one of 11 drivers sitting poised to make magic happen in the final 20 laps. While the magic ended up going to Sakura Ishibashi, Lucien Lachapelle, and Anastasius von Sonnen to launch them onto the podium, Lundqvist was all smiles climbing out of her Cherokee GP-Alpine in parc ferme. "The race went better than I was expecting it to go. First oval event in years, and it's one of the big ones where the full field shows up. I wasn't sure what to expect. A top ten finish makes me very happy."

The race was also the first where she had beat her teammate, Keisha Fox. Fox, who finished 13th, over ten seconds adrift of the race winner, was not quite as happy as her teammate, having been so close to winning the Indianapolis 500 in May. "I thought there was definitely potential we ended up leaving behind." Fox said after the race. "13th isn't bad considering how many finished, but we had a top 5 car, and we should have been up there. We'll try to recover more of it at Watkins Glen in a couple of weeks."

"Had a great car, stops were phenomenal and pace was there. Unfortunately as usual, Lady luck does not seem to like me this season as the rear tire went down and that was it for our day. I'm showing pace, I just now need to figure how to get rid of this bad luck"

Doing a bit of catchup as far as race on demand posts are concerned, so here we are!
Watkins Glen:

​
The 20th and final race of the 2020 AT&T Champ Car World Series season has been something incredible. We finally got through an entire season without missing a race, all 20 races are available on the CRC YouTube channel now. It's been a roller coaster ride from start to finish, and this community has made it a lot of fun to watch it unfold with. 2021 is going to be magical, and we've already begun to work on it. For those that participate, or have been watching and thinking about participating, the 2021 thread opens this week. But as the 2020 season officially closes, I now get to show the full award winners for the season.

Of course the season couldn't have happened without the amazing people in the CRC community that took part this season, and I hope to see you all return to our crazy, but fun fictional world next year. So I want to personally thank you all for a wonderful season! @nascarfan1400 @tbwhhs @Kingofweasles @Zooparker @Sakura @GTRacer22 @Eva @amaterasu @Eh Team @PinkKitty13 @BKGlover @RACECAR @LITTLEBLACKO @Formidable @YayoiGT2 @Suzumiya @swiftsmith