Traditional Ferrari tried the latest Formula 1 engine in a sportscar and the new Dino V6 engine designed for the 1958 season was no exception. Named in memory of its instigator Alfredo 'Dino' Ferrari, this highly advanced engine was designed for the most part by legendary engineer Vittorio Jano.

It first appeared in 1957 in 1.5 litre Formula 2 shape, but quickly grew in size to meet the higher demands of Formula 1 racing. To allow for more breathing space, the V6 had an unusual angle of 65 degrees and sported twin overhead camshafts. Less than a year after it had made its single seater debut in 1958, the Dino engine found its way into a sports racer.

With the new engine came a new naming policy as the traditional unitary displacement nomenclature was abandoned. The first two figures indicated the displacement and the third the number of cylinders. So when Peter Collins debuted the Ferrari 206 S in the 1958 Sussex Trophy, it was fairly obvious what was hidden under the aluminium bonnet. Externally there was little to distinguish the new racer from the contemporary Fantuzzi bodied and V12 engined 250 TRs, other than the three sets of Webers sticking through the bonnet instead of the more familiar six.

Technically there was little to distinguish the two and it was heavily rumoured that with larger engines, the Dinos would eventually replace the V12 sports racers. Still with the two litre engine Collins finished second and a week later Gino Munaron won the first heat at a local race in Monza. The rumours were further strengthened when Mike Hawthorn appeared with the three litre engined 296 S.

At the end of the season, Enzo Ferrari concluded that the Dino-engined machines would be too complex to be operated by privateers and not fast enough to replace the 250 TRs in the Works team. Both cars were stripped of their engines and the 3 litre car received a V12 engine and was sold as a 250 TR to Luigi Chinetti of the North American Racing Team (NART). The first car was retained, awaiting the installation of a new version of the Dino engine. Other than having six cylinders, the new Dino shared little with its namesakes.

The heads sported just one camshaft each and the V-angle was back to the conventional 60 degrees. It was designed with both a racing and production purpose in mind. Although having an identical displacement, the new engine was down almost thirty horsepower on the quad-cam 206 S and to prevent confusion, the new two-litre V6 was dubbed 196 S. A more civilized version was also tested, which still developed a hefty 175 bhp. The 196 S racing engine was installed and finished with the latest version of the Fantuzzi roadster coachwork debuted victoriously in the Coppa Sant'Ambroeus at Monza in May of 1959.

Later that season a second 196 S was completed and immediately sold to Chinetti for him to enter in North America. Chinetti entered in a variety of races for the Rodriguez brothers, including the 1960 Sebring 12 Hours and the Targa Florio, but with little success. Just like the Dino engined Formula 1 cars, the traditional sports racers started to loose against the more advanced mid-engined racers.

Two more front-engined cars were constructed, both initially fitted with a 2.4 litre four-cam version of the Dino V6. The latter also featured independent rear suspension through double wishbones, instead of the familiar live-axle. These were intended as back-ups for the heavier V12 engined cars on the twistier tracks. Phill Hill and Wolfgang von Trips came close to success in the 1960 Targa Florio, but could do no better than second behind the lighter and nimbler Porsche RS60 of Joachim Bonnier and Hans Herrmann.

Like in Formula 1, Ferrari had switched to the mid-engined layout for their Dino sports cars for 1961 and not without success. 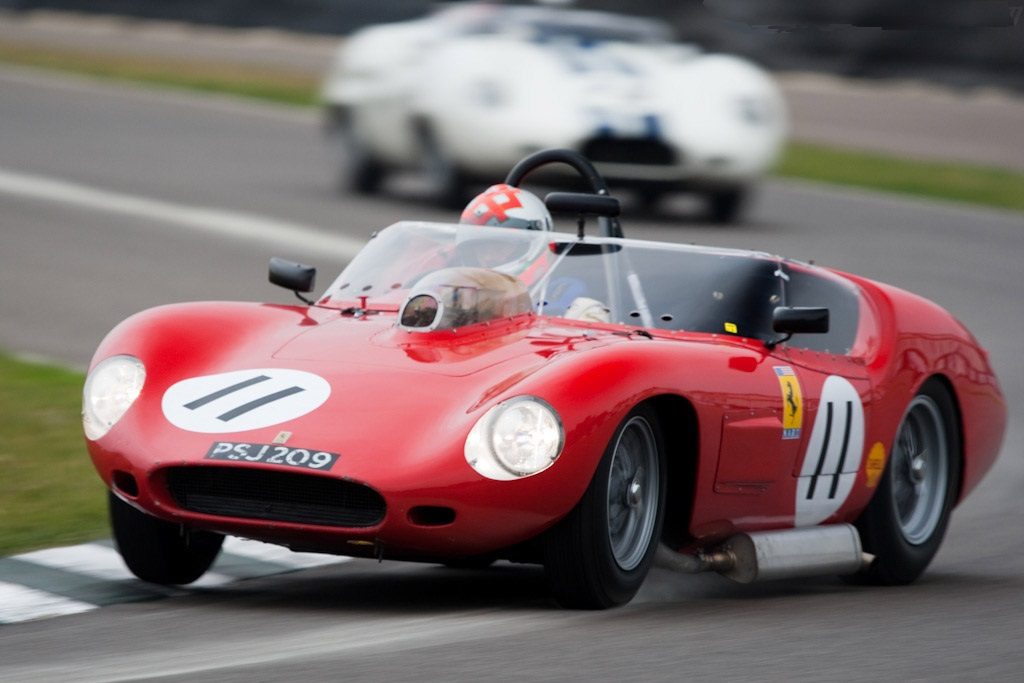 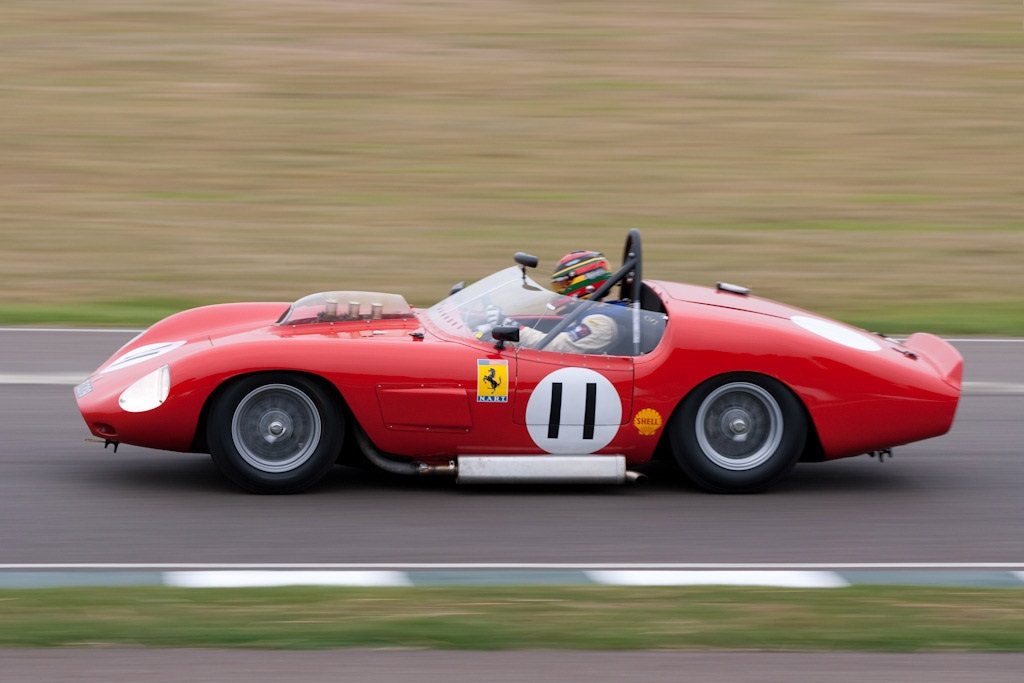 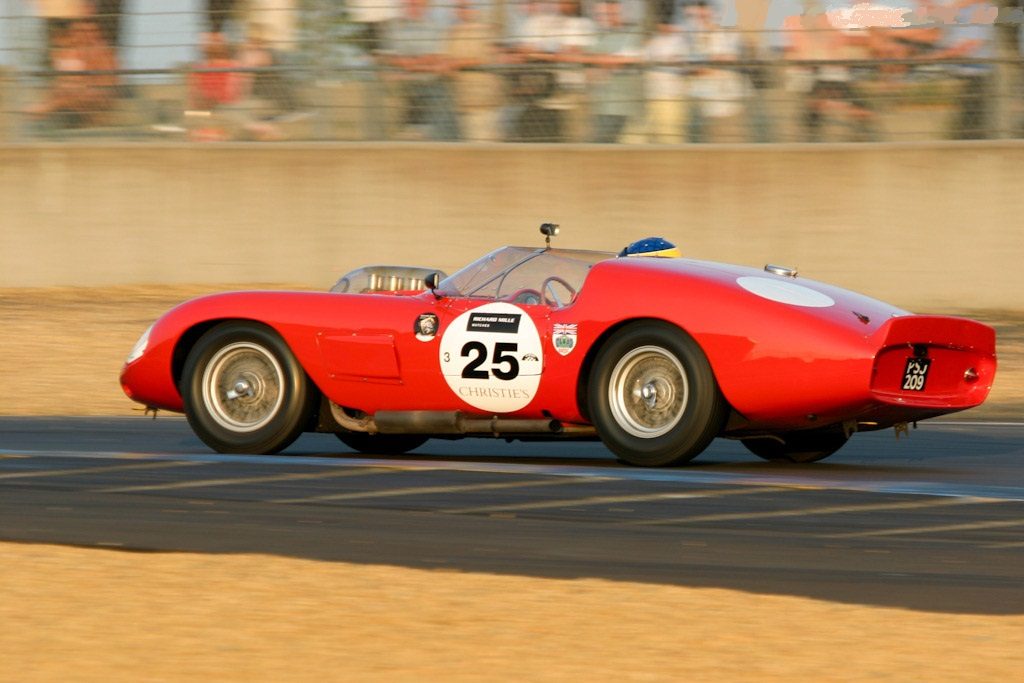 Ferrari is an automatic like IMAO. The side pipe is weird though.

Wasn't there a road car of this made for some old Italian movie or something? I seemed to remember seeing a pic of gold colored Fantuzzi soemwhere....Oooops wrong car....my bad. At least let me show the "wrong" car... 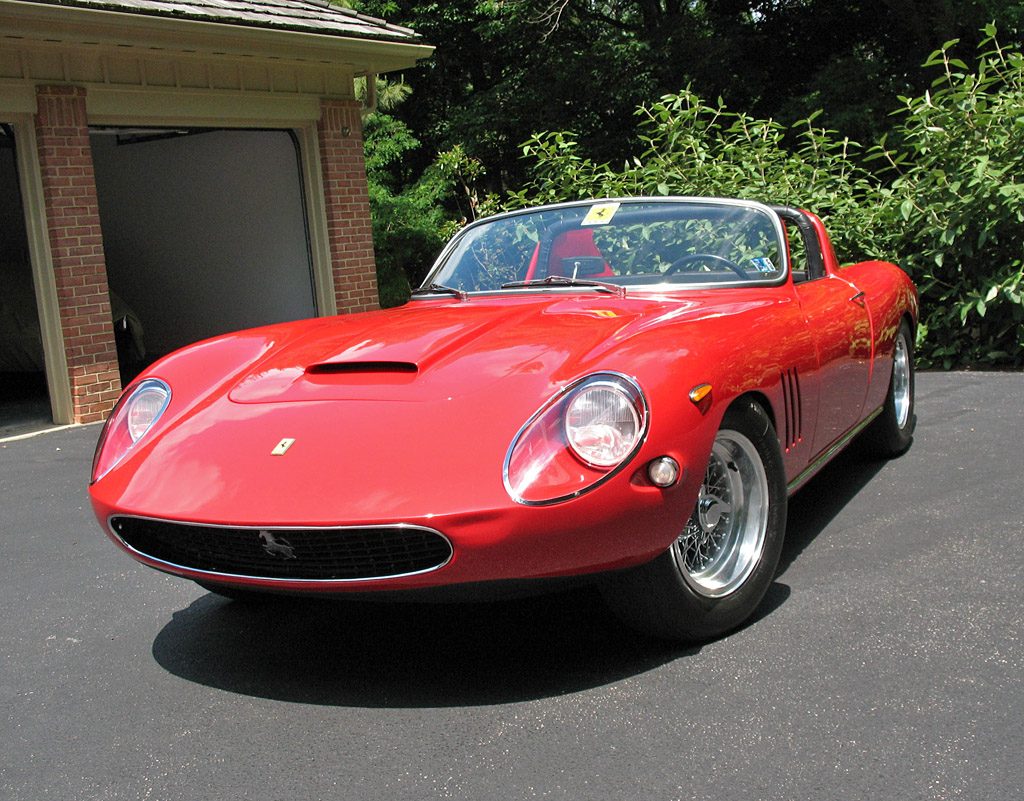 Interesting how short the wheelbase looks and how far the bodywork extends from it.

I'm amazed by the fact it had a 5 speed manual. Not many cars had anything more than 3 speeds. See: Jensen Interceptor, Corvette 60s era, the pick up I can't recall the name of... etc 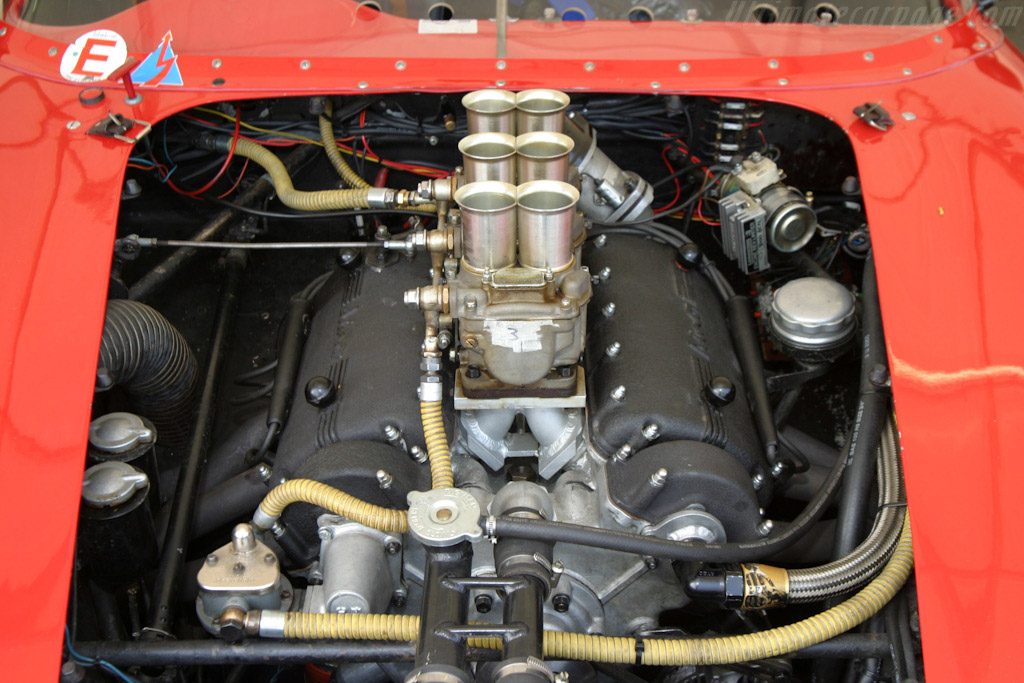 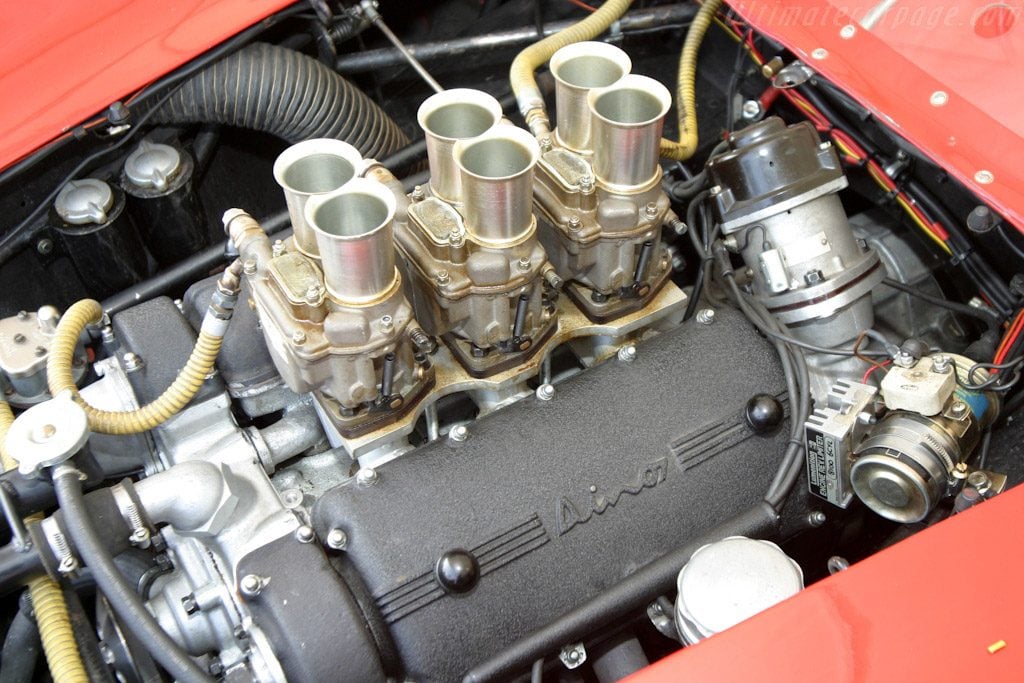 The engine bay gives a good look at the Dino engine.
Thanks for the photos.

Monatsende
Ferrari is an automatic like IMAO. The side pipe is weird though.

Sorry, but I missed this question.
Yes, the muffler on the side is historic not correct, like the roll bar behind the seat of the drive.
The muffler is needed to meet the track sound regulations nowadays
And the roll bar because of the safety rules.
Thanks for voting too.
Share:
Reddit Pinterest Tumblr WhatsApp Email Share Link