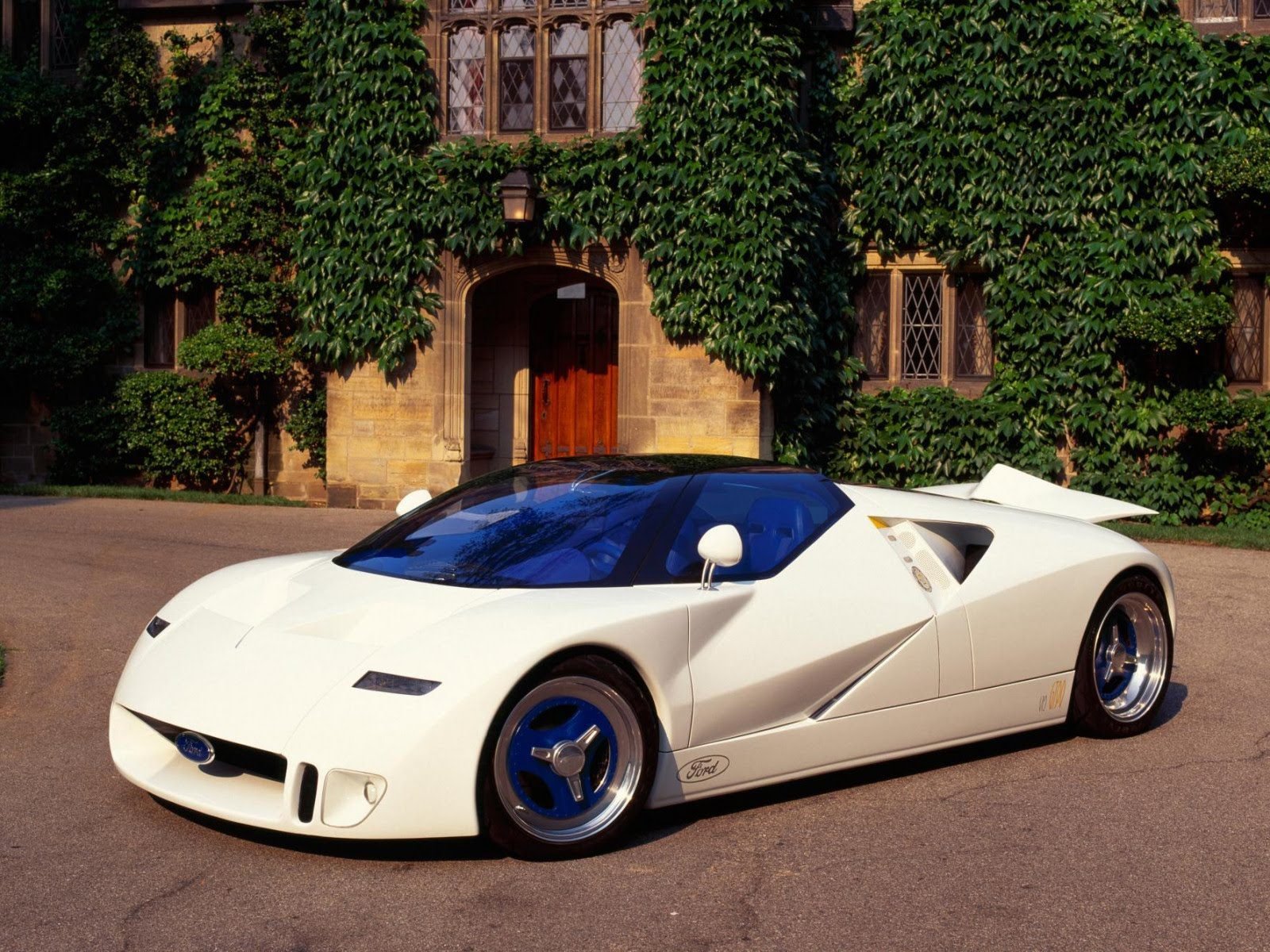 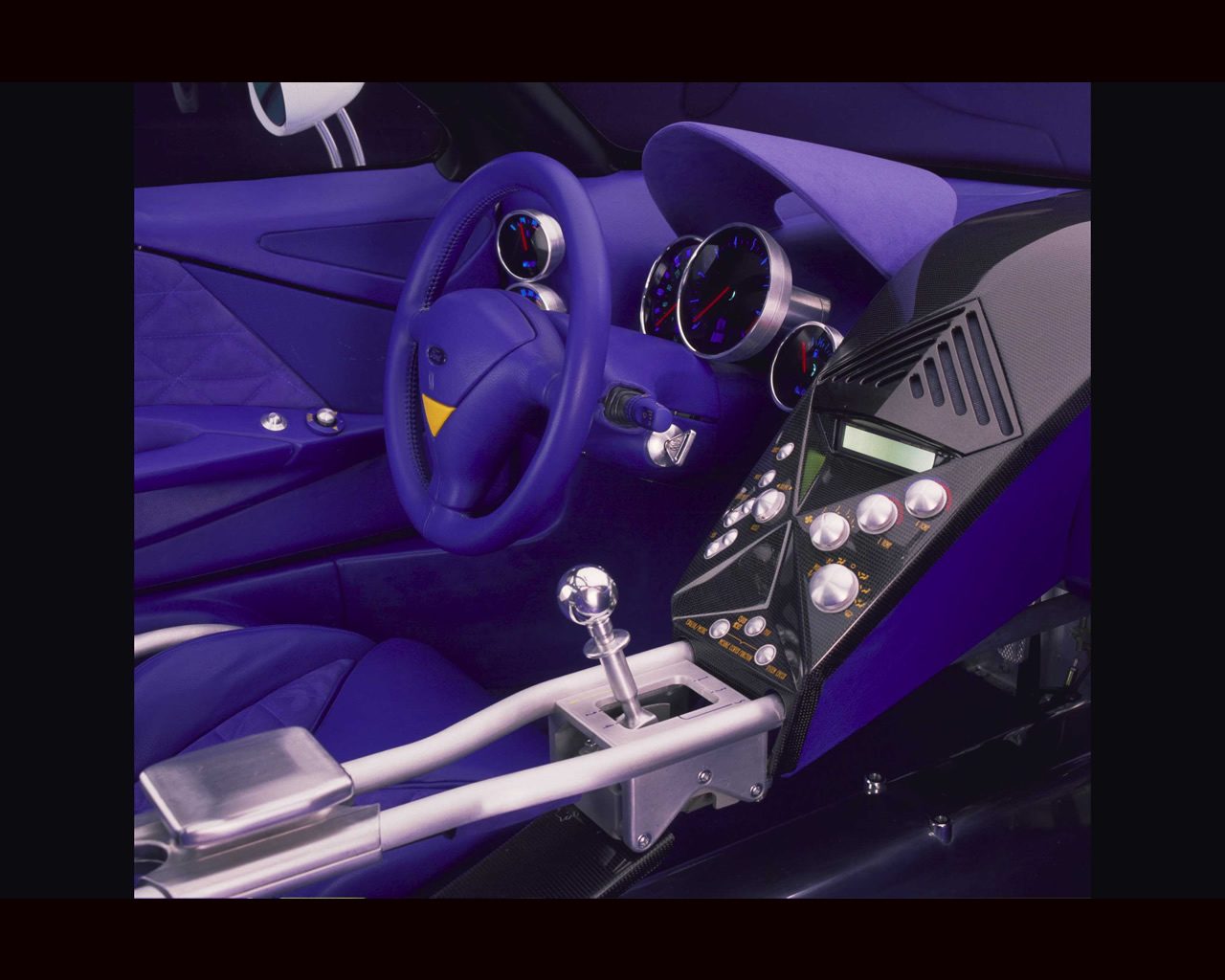 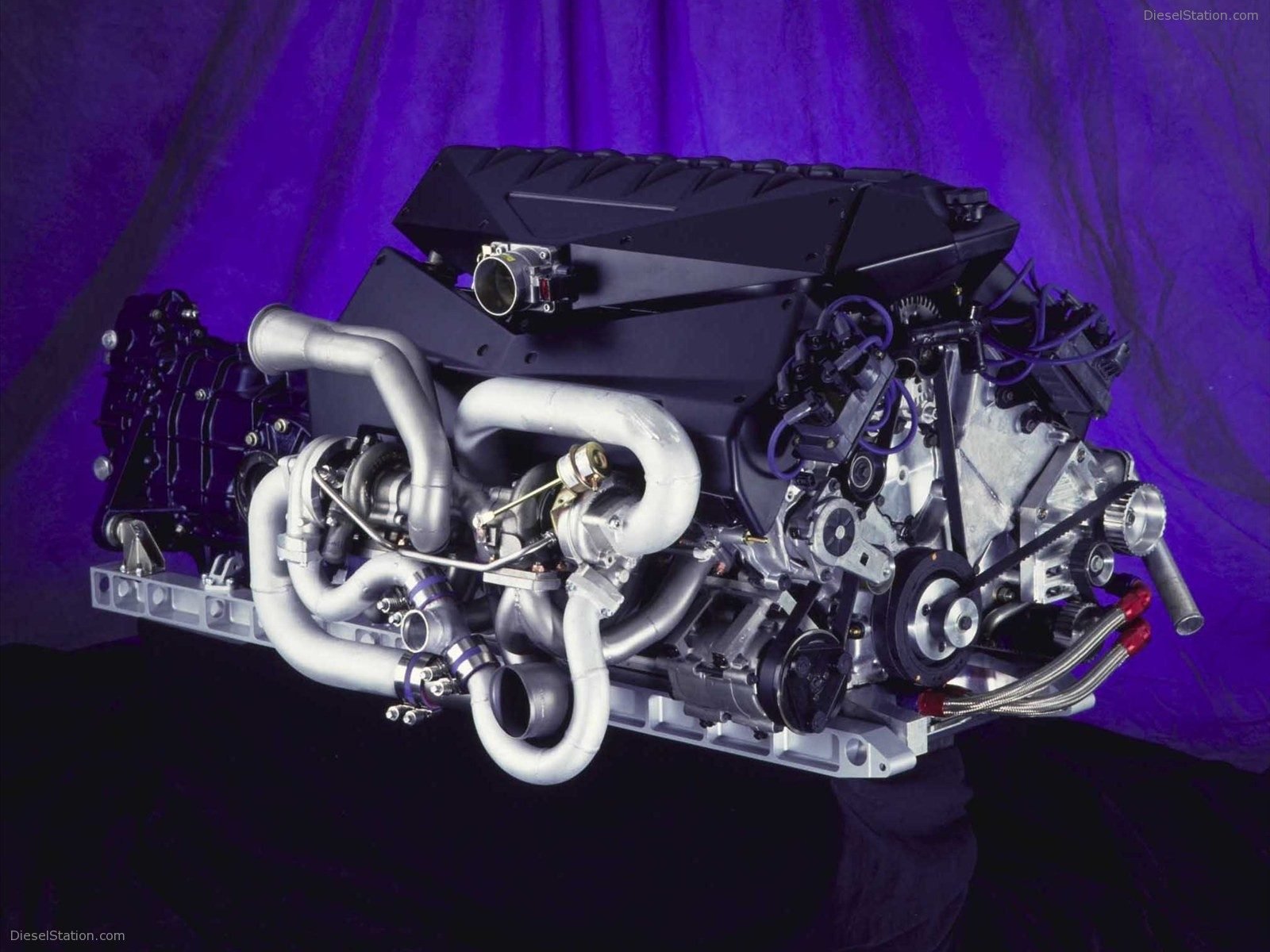 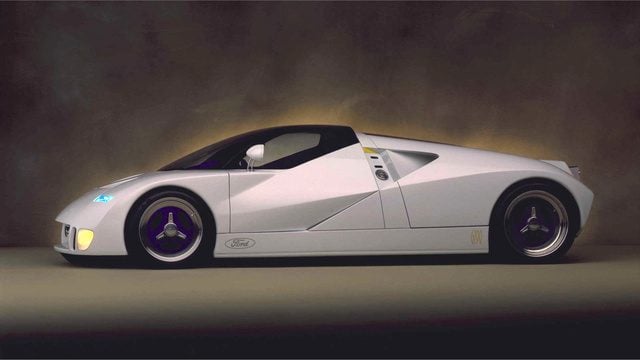 Wikipedia
The Ford GT90 is a concept car manufactured by the Ford Motor Company. It was unveiled in January 1995 at the Detroit Auto Show as "the world's mightiest supercar". Performance included a top speed 235 mph (378 km/h) completing a quarter mile at 140 mph (225 km/h) from a 720 hp (537 kW;730 PS) quad-turbocharged V12 engine DOHC, the exhaust of which was claimed to be hot enough to damage the body panels, requiring ceramic tiles similar to those on the Space Shuttle to keep the car from melting.

The mid-engined car is a spiritual successor to the Ford GT40, taking from it some styling cues, such as doors that cut into the roofline, but little else. All angles and glass, the Ford GT90 was the first Ford to display the company's "New Edge" design philosophy. The GT90 was built around a honeycomb-sectionaluminum monocoque and its body panels were moulded from carbon fiber.

The GT90 was built by a small team in just over six months and, as a result, borrowed many components from another high profile stablemate—the Jaguar XJ220. The all-round double wishbone suspension and the five-speed manual gearbox came from the Jaguar, while the engine was a 90-degree quad-turbo V-12.

The GT90's 48-valve V12 was a six-litre engine which, if Ford had ever produced it in volume, might have produced up to 720 hp (537 kW), thanks to four Garrett AiResearch T2 turbochargers. The engine was based on the 90-degree Ford Modular engine family. For this one-off showcar, the last two cylinders of 4.6-liter V8 engines were removed, and the engines were welded together. This yielded a 90-degree V12, with 90.2 mm bore and 77.3 mm stroke.

Jacques Nasser, then a Ford executive and eventually CEO, was very proud of the car, and kept a model of it on his desk, as seen in a documentary on the U.K. television network Channel 4 on the Firestone tire incidents.[citation needed]

This car is one of my favorites from Ford (even if it's a concept). In fact, this car was named one of the best concept cars by Jalopnik. This thing had a whopping top speed of 235 MPH (Or 378 KM/H for our European friends). Please "Like" this post if you want PD to bring this beast back from Gran Turismo 2. 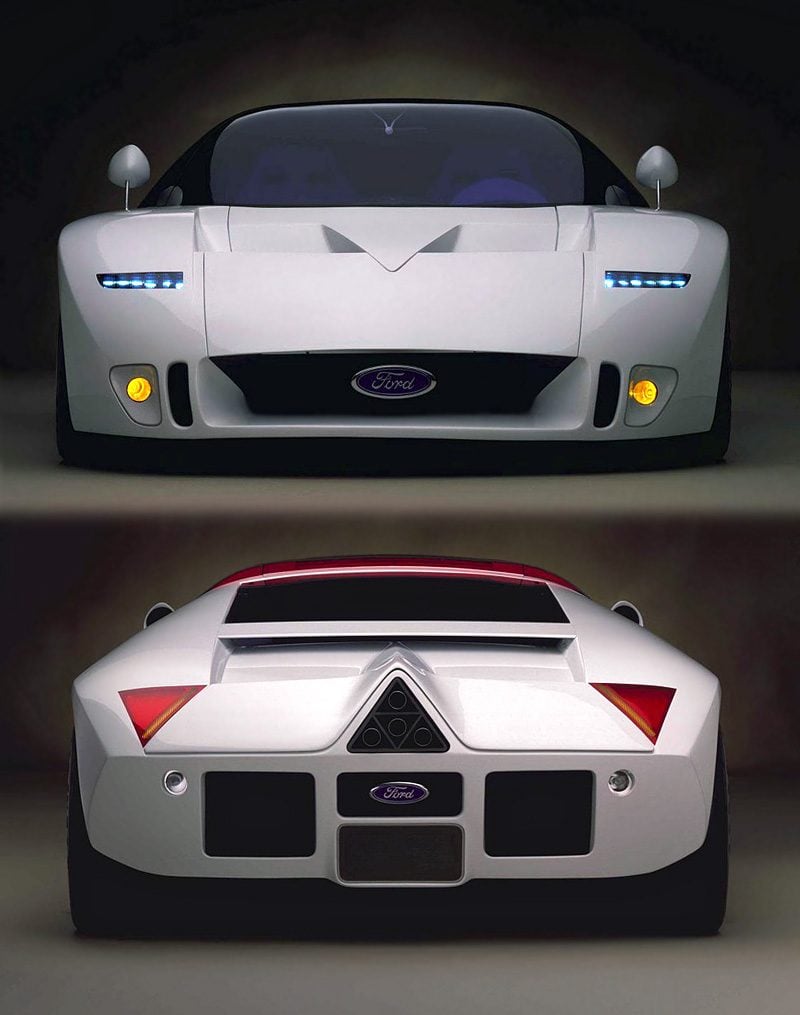 I still have never driven this car. 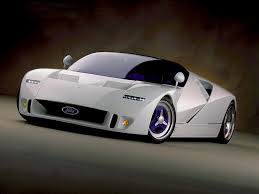 Yep I remember from the old NFS days.

Ford Racing 3 introduced me to this car... Loved it.
D

Apparently a guy is building one for himself since Ford has no balls to mass produce it.

I suggested this car in the GT6 car and track wishlist. This is a Top Gear clip of it here:

I bet that the Ford GT90 is the first to have a curved raising rear wing.

I miss this car. Gives me an excuse to fire up GT2 from time to time.

don't read this thanks

Unfortunately, I've never even owned or even played GT2.

I would like this, but it currently has 90 likes, and that's too prefect for me to mess up! Lol, I'll come back later.

Yeah, this needs to happen!

Vote for a great piece of American History!! 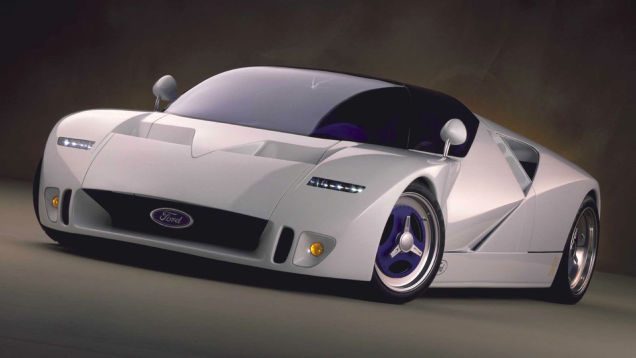 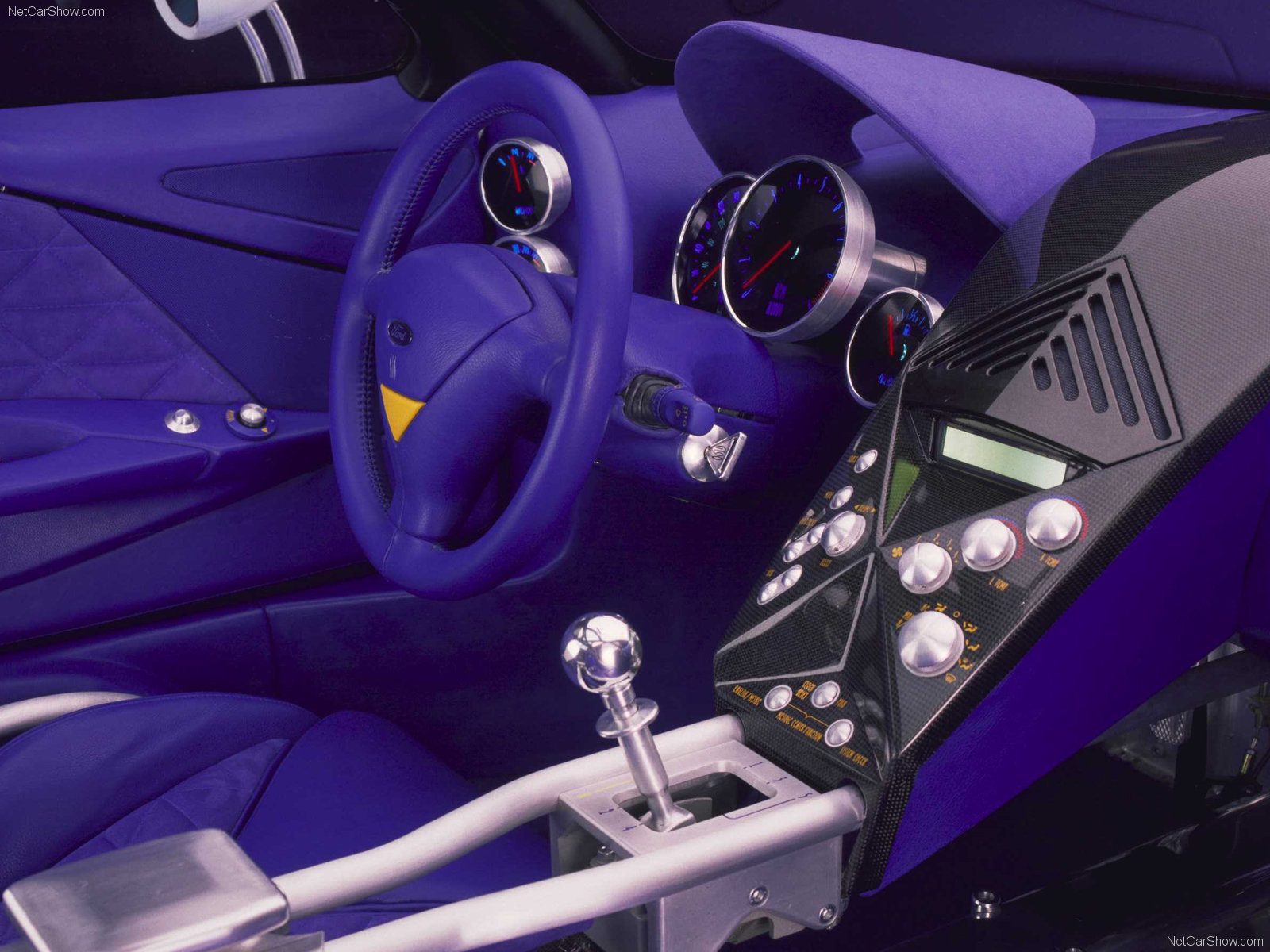 I really want this car in GT6. I never drove it in GT2 as result being an harder car to get but it looks good.

Photo of the GT90 in Gran Turismo 2 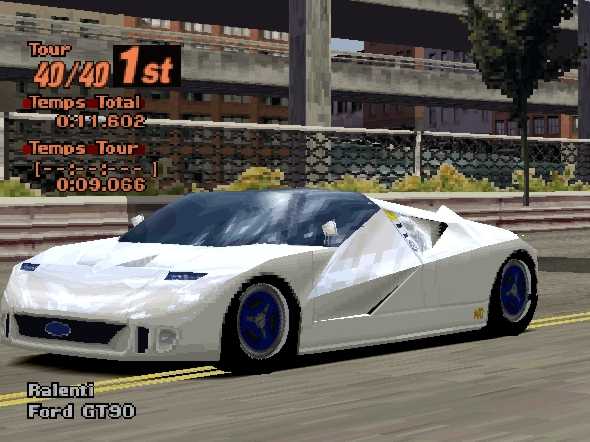 I'm going to bump this thread, because I think it deserves a heck of a lot more votes than this. This has still got to be THE most striking concept car ever made... And I sometimes can't believe it was made way back in 1995.
I can also see hints of the 2016 GT in its design.

Loved it in GT2... But it was a really unstable car to drive. It's nearly impossible to drive it flat-out on the High Speed Ring without having a catastrophic accident.

How did I not vote for this yet 👍 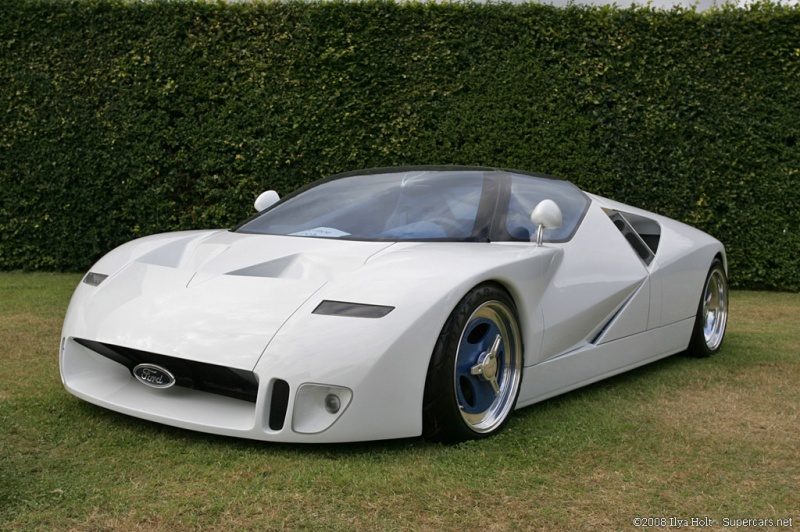 Launched at the 1995 North American International Auto Show (NAIAS) in Detroit, the Ford GT90 has gone into history as one of the most spectacular and influential concept cars. Ford spent just over six months and around $3 million to create the one-off machine. This was wholly justified as the GT90 served to introduce Ford's 'Edge' design philosophy to the world. Fortunately a considerable chunk of the resources was used to back up the revolutionary styling with a hugely impressive drivetrain.

As the name suggests, the GT90 was a modern interpretation of the all-conquering GT40 sports racer of the 1960s. The two machines share a similar drivetrain-layout and proportions but the GT90 is certainly not a retro design. The core of the fully functioning concept car is formed by an aluminium honeycomb monocoque. Although the majority of the car was custom built, some 'off the shelve' components were used to speed up development. Many of the existing parts used on the GT90 were lifted off the Jaguar XJ220. The biggest XJ220 sourced bits were the double wishbone suspension components on each corner.

Mounted amidships was a unique V12 engine, boosted by no fewer than four Garrett turbochargers. The 6-litre unit was built up of two of the quad-cam V8s found in the Lincoln Mk VIII road car. On one block the last two cylinders were cut off and on the other the first two. The two six cylinder blocks were vacuum-welded together to form a single engine. The quad-turbocharged V12 produced a mind-boggling 720 hp at a time when the most powerful Ferrari struggled to get past the 500 mark. The all-aluminium engine was mated to a very sturdy five-speed Ricardo gearbox that was also used on the XJ220.

The spectacular rolling chassis was covered in lightweight carbon fibre body panels. With large flat planes, angles and triangular shapes, the exterior was a major departure from the clean, flowing designs that had become the norm in the early 1990s. Ford called it the 'Edge' design philosophy, which inspired a whole generation of road cars like the Ka, Cougar and Focus. Some elements can still be found on Blue Oval's latest products. One of the GT90's most spectacular feature was the massive canopy style front window that arcs well into the roof. The tail of the car sported a wing that raised from the deck for additional stability at high speeds.

The GT90 was received with universal acclaim at its 1995 NAIAS launch. It was subsequently toured around the world, making appearances at the Frankfurt and Tokyo shows. Several journalists were also allowed to sample Ford's new supercar and found the GT90 was much more than just a styling statement. Ford's official figures suggest it could accelerate from 0-100 km/h in just over three seconds on to a theoretical top speed of 407 km/h. 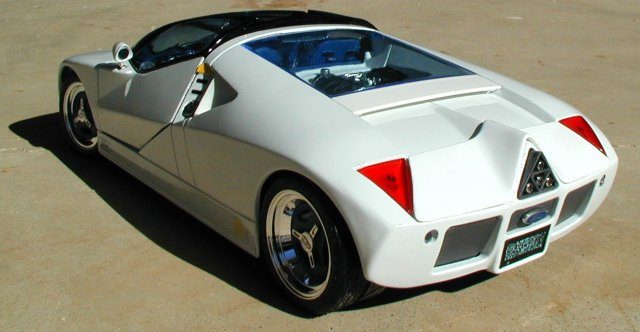 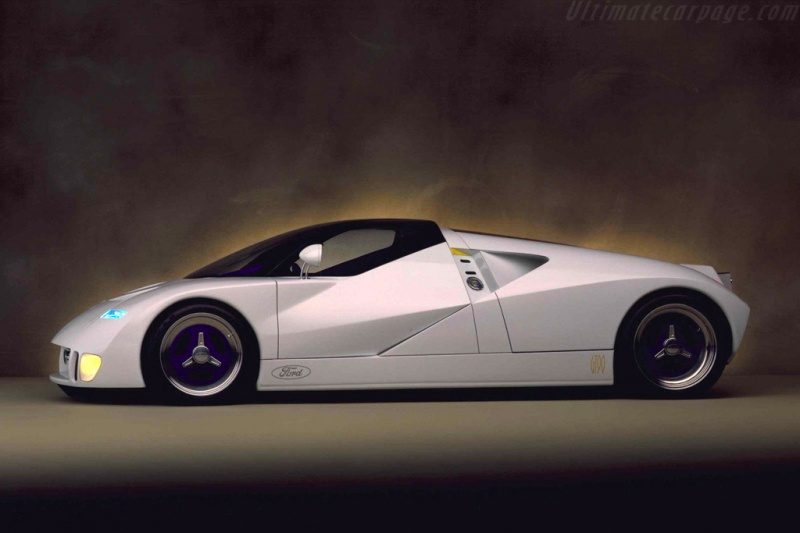 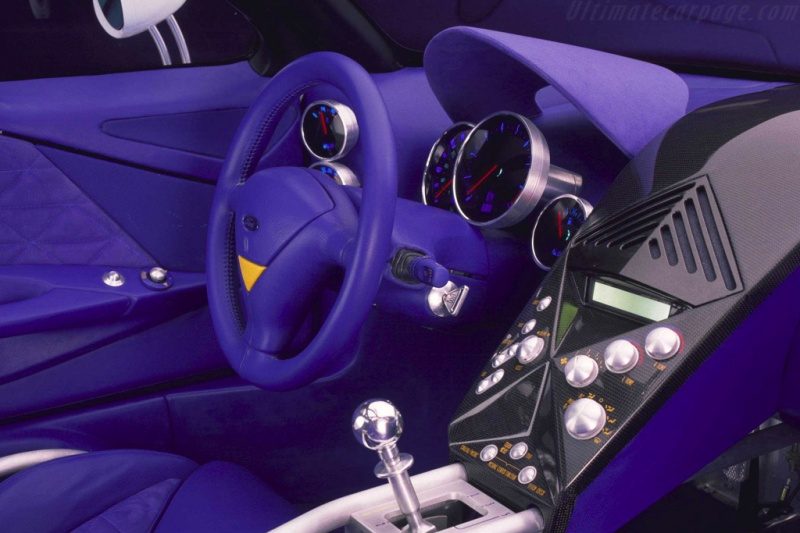 Be careful what you wish for.

Eh, I don't think that's anything to worry about. The problem with the GT90 was that it was a fully functional car that nonetheless wasn't really engineered to do they things it could have done (but not necessarily being incapable of doing them), but with PD's propensity to include concept cars that never had working drivetrains at all (or more recently, don't even exist) I don't think that is really an issue.

Tired Tyres
Be careful what you wish for

It'd be ok. PD could just make it as good as it could (and should) have been

Tired Tyres
Be careful what you wish for.

This is one of the reasons to find or keep the GT2 game. It should come back to GT for that interior.👍