Today it is race day 16h15 BST
lobby open on Willow Springs International Raceway: Big Willow with Pantera 1971
First race will be lots drift in sand and for the second on Sainte-Croix B II with Countach LP400 sound like lots 360° spins
that's today's challenge

I hope to see you on track

Last Sunday we run the Classic Cars second Round. At the start Tom_Ascar 2nd on grid jump fast and as he was on the inside manage to pass gu1tar3rich who get is position back after the last curve. Unfortunately 2 drivers had to abandon race. The race was all about pit strategy after a crash gu1tar3rich had to pit but Tom_Ascar avoid it and stay on with a broken suspension. After all incidents we had the race was pretty close, any way It was a good session. 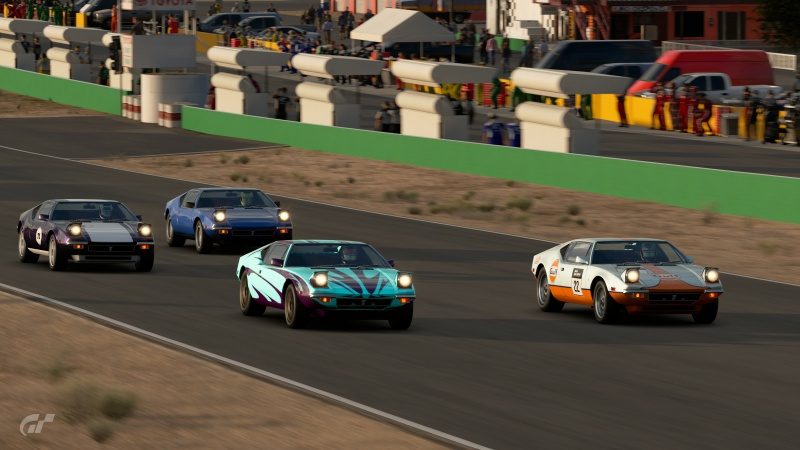 After the last curve gu1tar3rich get is position back 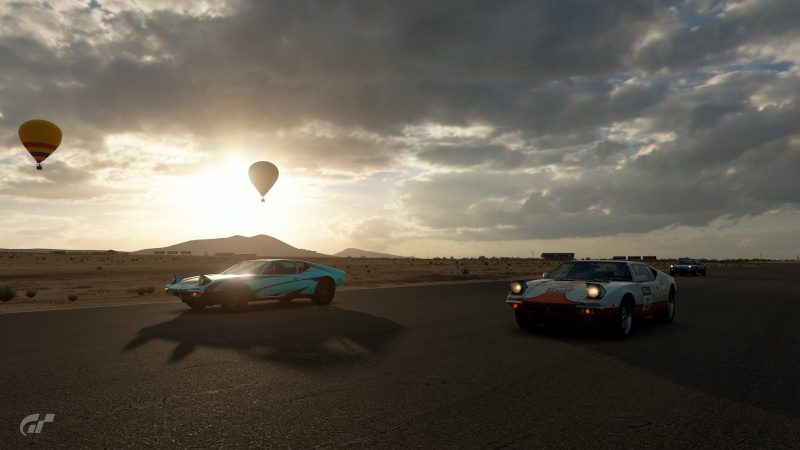 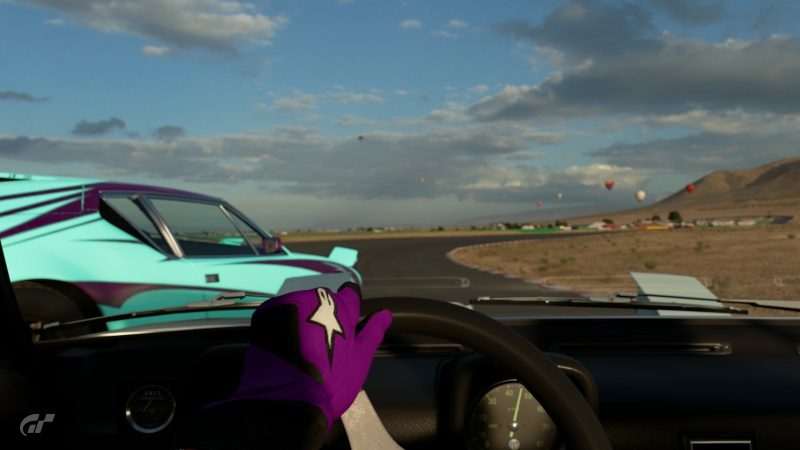 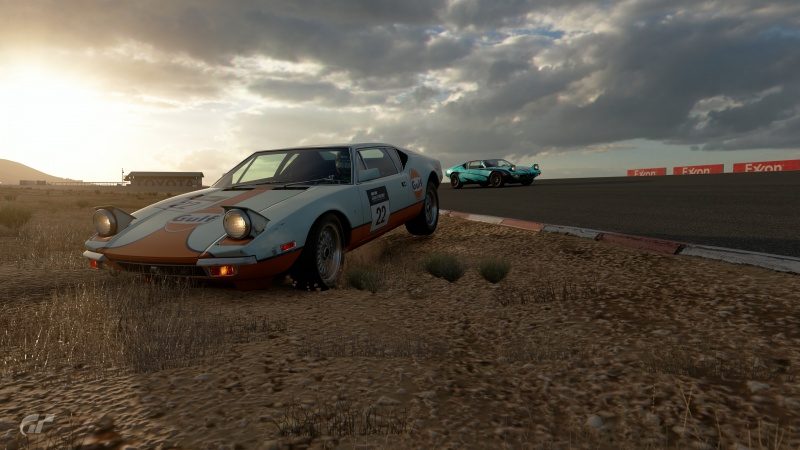 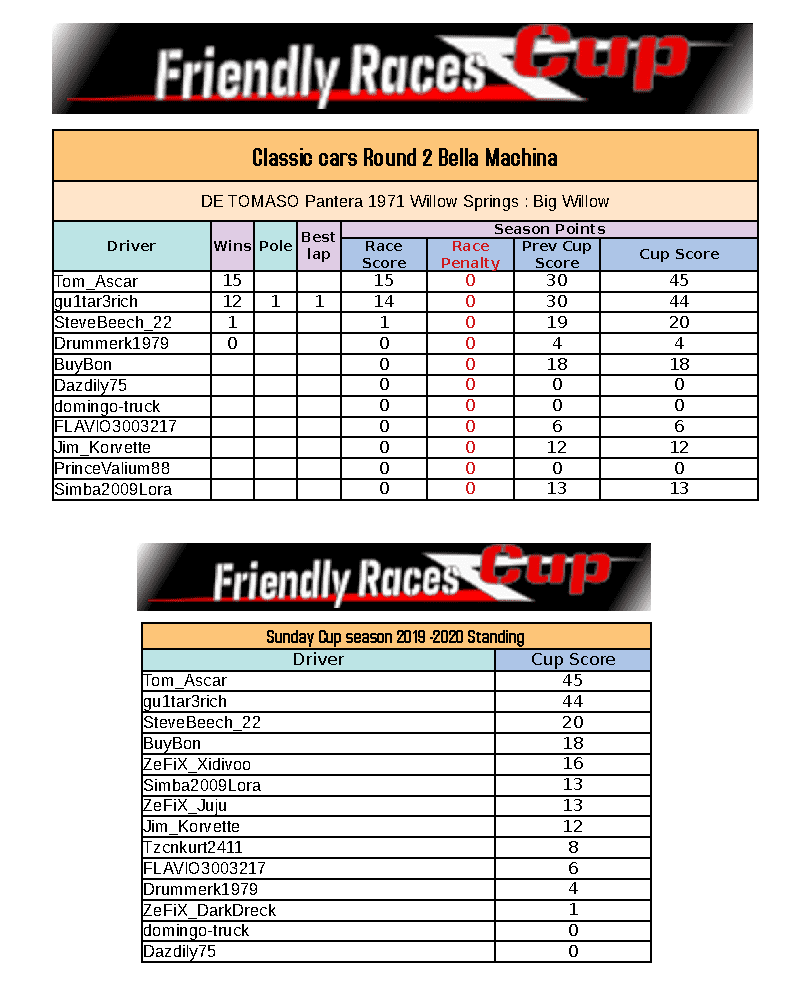 
Next Sunday Old Days Scuderia hope to see you on track

So sorry I had to bail! The best concept for a lobby I've come across since joining online racing! Love the Classic Car races! Congrats, Tom on a stellar racing idea! I will see you next race! 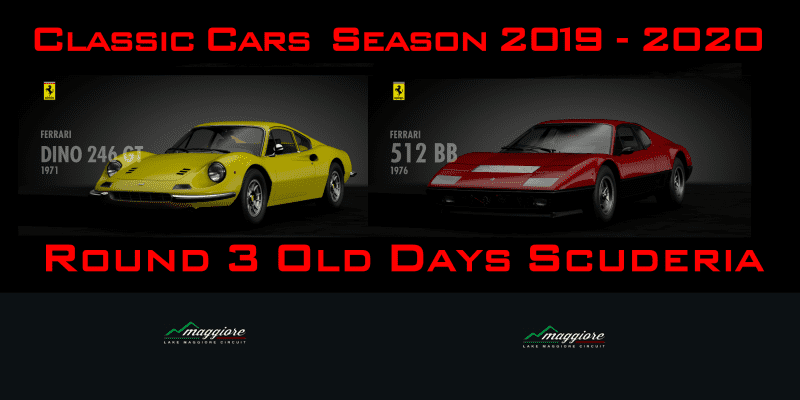 We did went trough 2 Rounds of Classic Cars and 1 for Le Mans Racing so next Sunday it will be our 4th gathering thank you all for following the Cup.
For that next round we will stay on the same track racing it both ways with 2 cars. I did change track and tyres quality for the second race 512 BB 1976 (N400) track is now Autodrome Lago Maggiore – West and tyres Sport Medium to Sport Hard Tyres. In fact after several test I'm sure everybody will enjoy it better and having the choice between to set of tyres will make strategy more fun I hope.

wont be home from work for lobby, I will see you on race day.....Ill be the car sliding around the track!!

Hi guys I must say last Sunday Cup was not crowded weird after the great Practice lobby I had on Thursday, anyway that’s how it goes. Hopefully all the guys in where decided to race no madder what.
For the first race Tom_Ascar start leading the pack and to confident lots grip on 2nd lap leaving and open room for gu1tar3rich who pass easily before hairpin. Then the next lap he also lost the car in the S and Tom_Ascar was able to get he’s place back in the last chicane. Poor Drummerk1979 broke the car in first lap and was forced to pit. Unfortunately gu1tar3rich had to abandon in middle of the race.

For the second race a new driver had joined the room and we where 3 drivers again for the start. 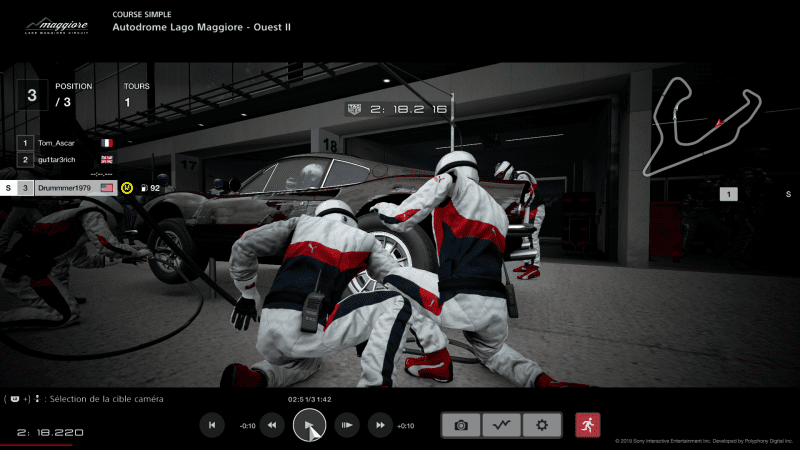 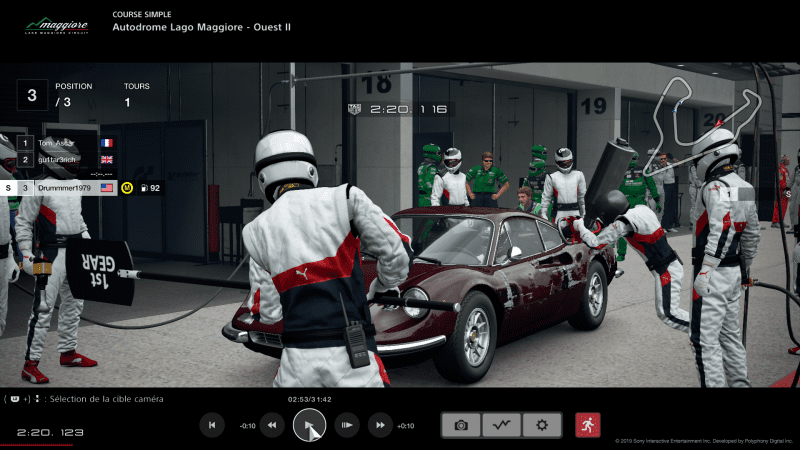 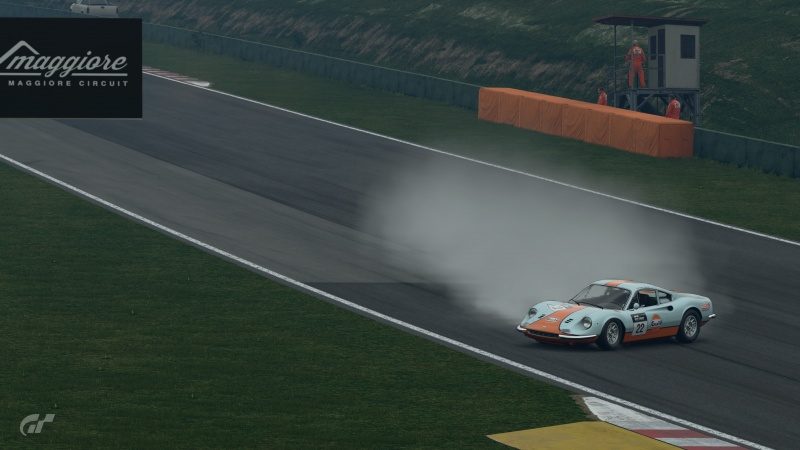 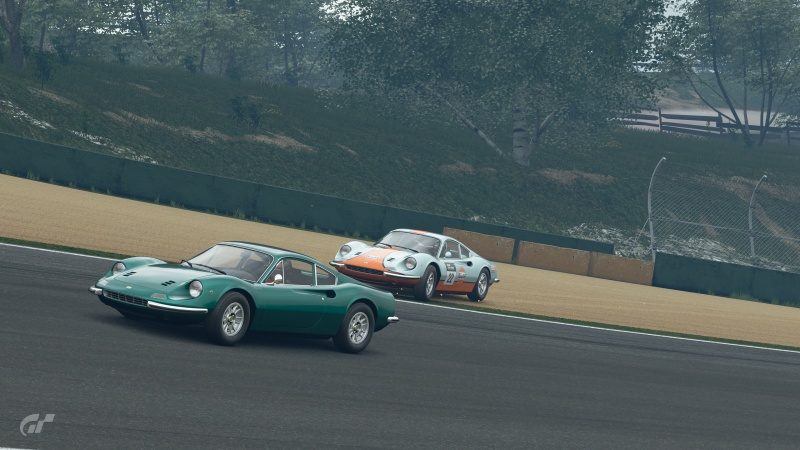 gu1tar3rich lost the car in the S 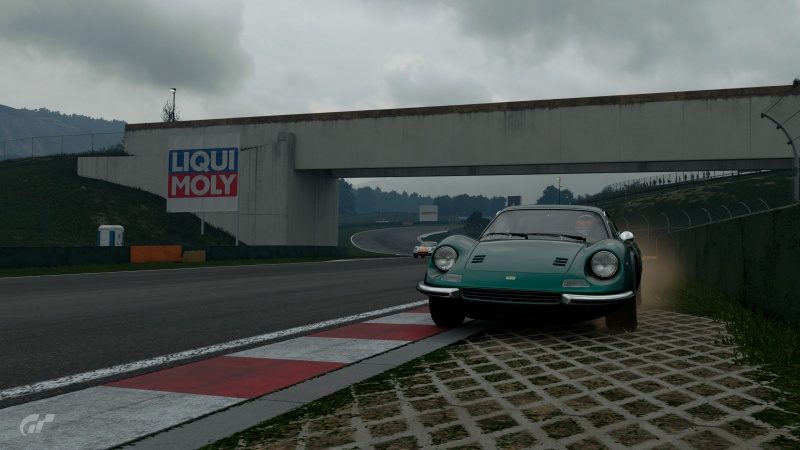 Tom_Ascar get he’s place back in the last chicane 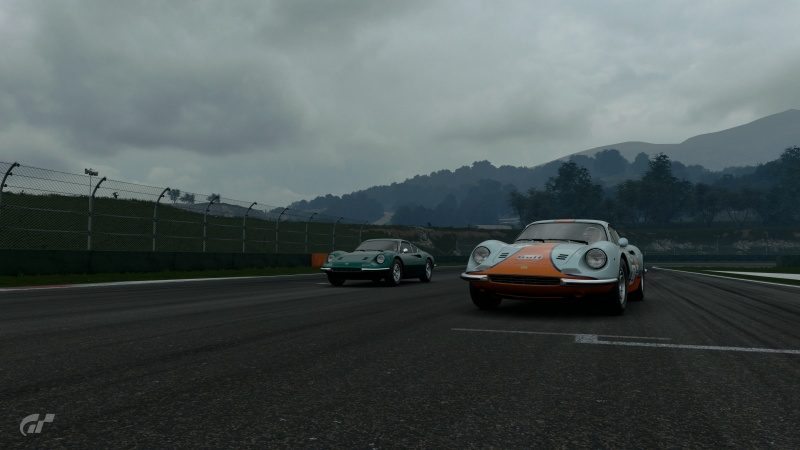 second race 3 drivers again burning it on the start 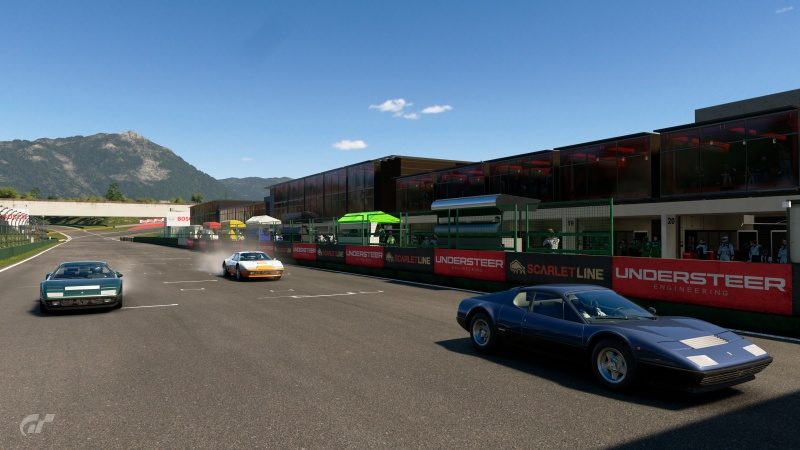 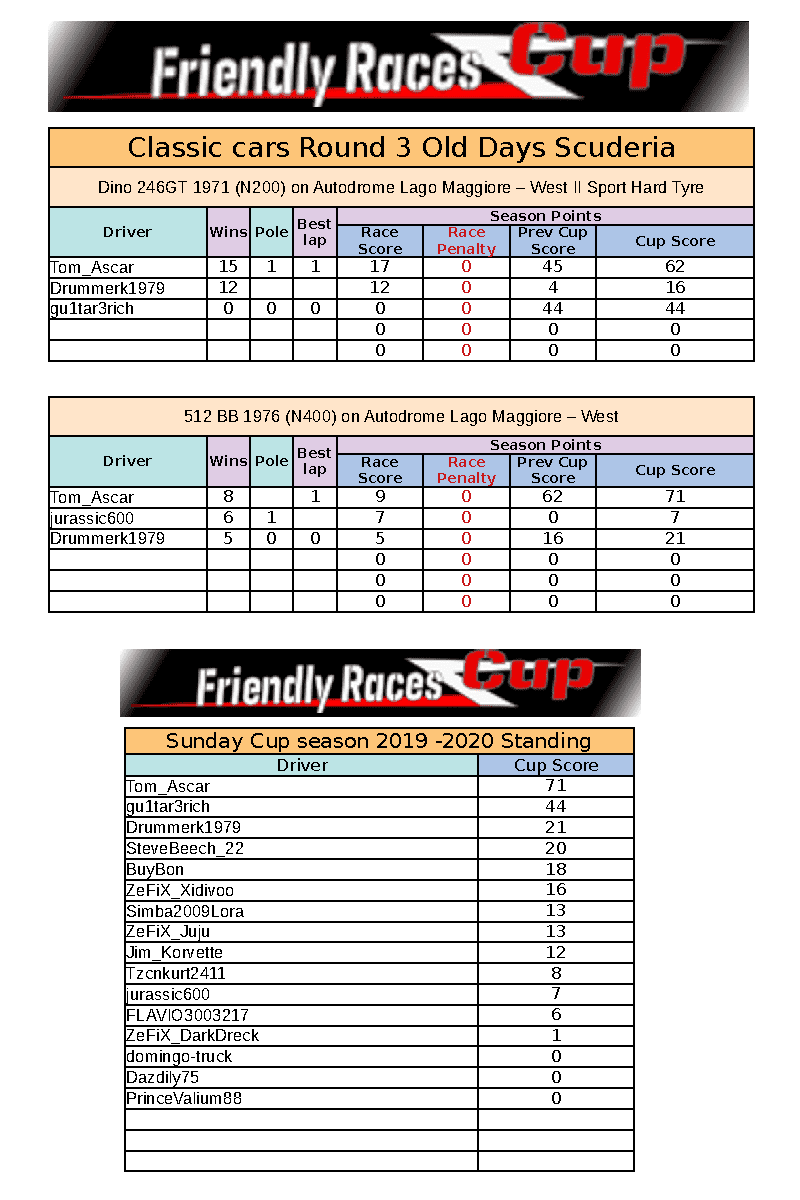 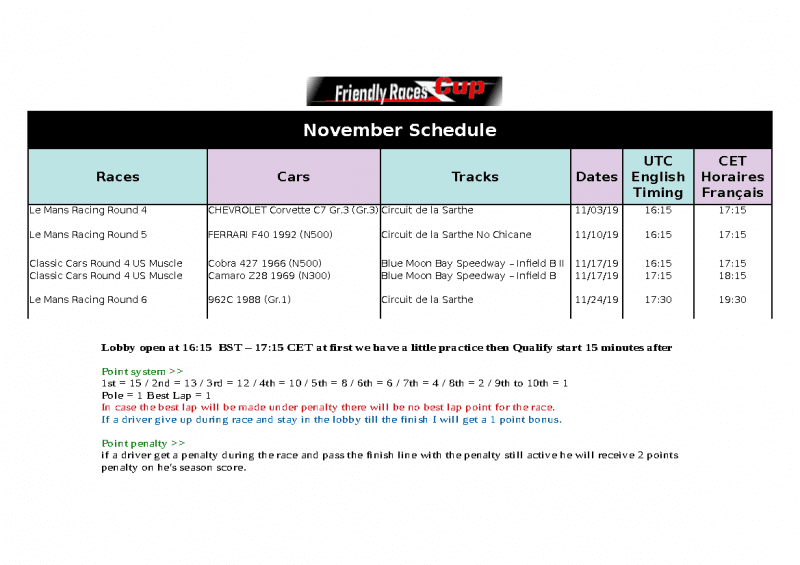 Npb we'll have all the time to race again. 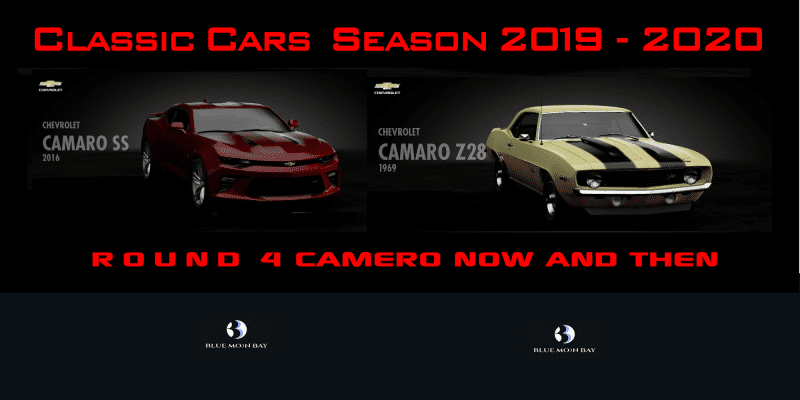 ​
As is has been brought to my attention Cobra is an expensive car so I decided to change the event for Camaro Now An Then.

After a long time with out Classic Cars racing we are back into that fun. This one is gonna be what we couldn’t have missed the most “US Muscle Car”. We will race the 2 cars on Blue Moon Bay Speedway both way.

As is has been brought to my attention Cobra is an expensive car so I decided to change the event for Camaro Now An Then. Check the new event here

Sunday Cup Classic Cars Round 4 Camaro Now and Then​

Will not be available today. Good luck and good racing to you all.

Sunday Cup Classic Cars Round 4 Camaro Now and Then reschedule 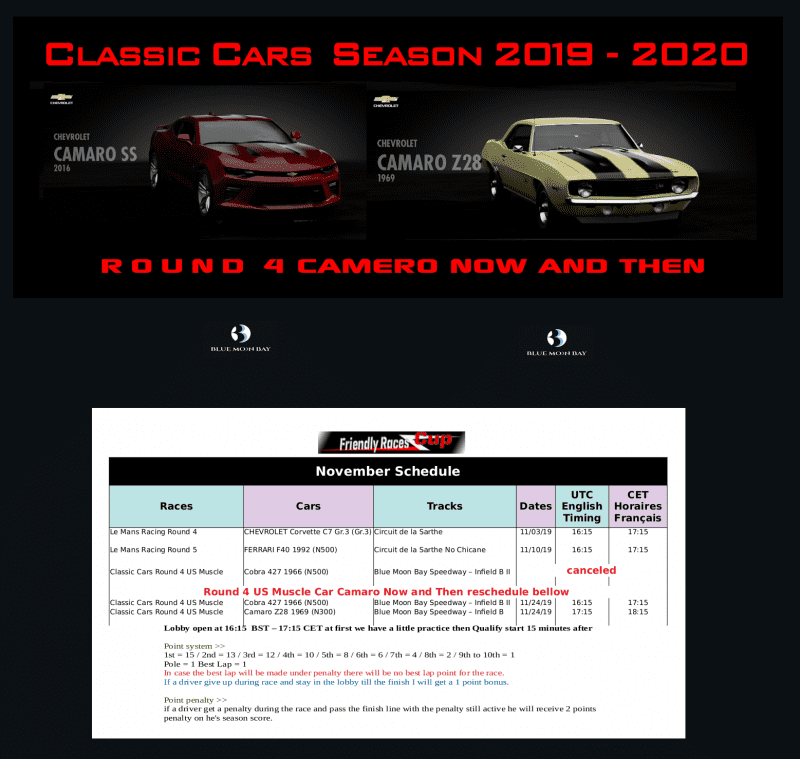 I’m not sure I could open Warm Up that Sunday.

Drummer79
Will not be available today. Good luck and good racing to you all.
Click to expand...

I haven’t done that kind of event for a long time and after the fun we had now I’m thinking starting a Muscle car series in January, with Now and Then combo and Tuned US classic muscle car.

That Sunday we welcome a new driver lucio85270 and I hope he’ll stay in the Sunday Cup and show the same spirit we share.

Unfortunately I have to report a race incident between lucio85270 and Drummerk1979 in the second race strong move on the inside that run off track Drummerk1979. As it could have been hard feelings from first race that put lucio85270 in a bad disposition I toke the time to review the first race in detail. There I could not find bad attitude from Drummerk1979 who could have started the situation, so he get the “Stays in no mater what Trophy” for that Sunday event.
Nice spirit mate 👍

Regulations :
After reviewing the replay I have to put a warning to lucio85270 for an inappropriate and to strong move on the inside with Drummerk1979. 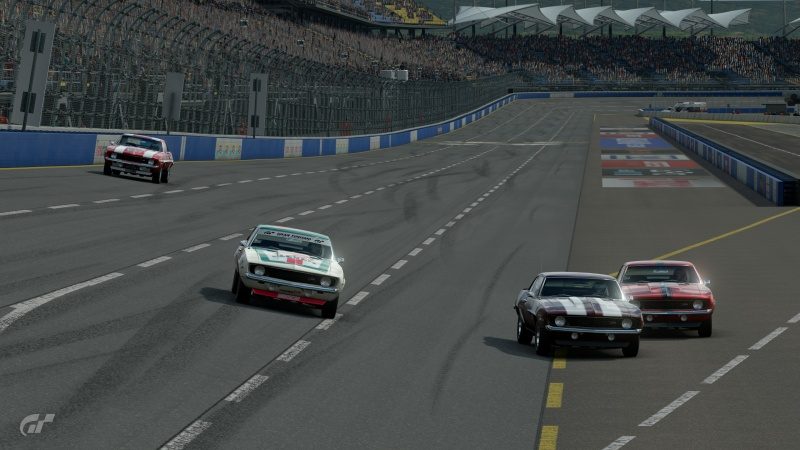 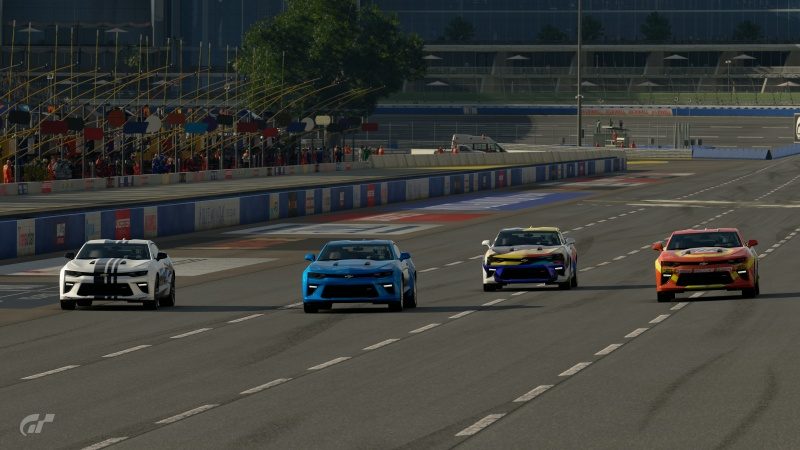 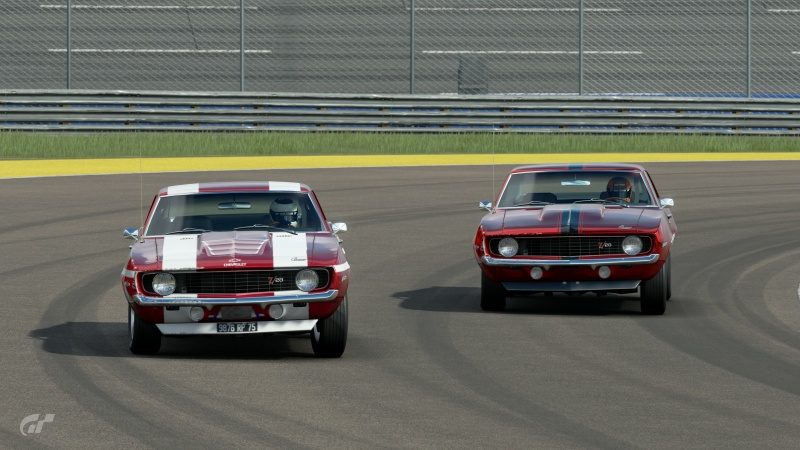 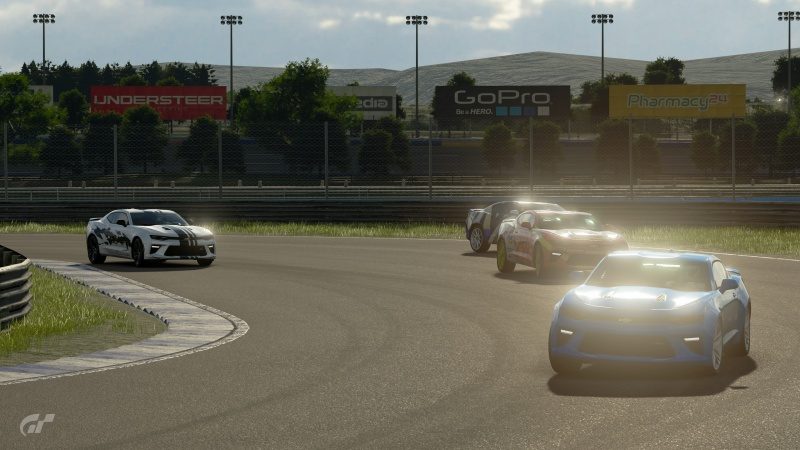 Sunday Cup Round 4 Camaro Now and Then highlights​ 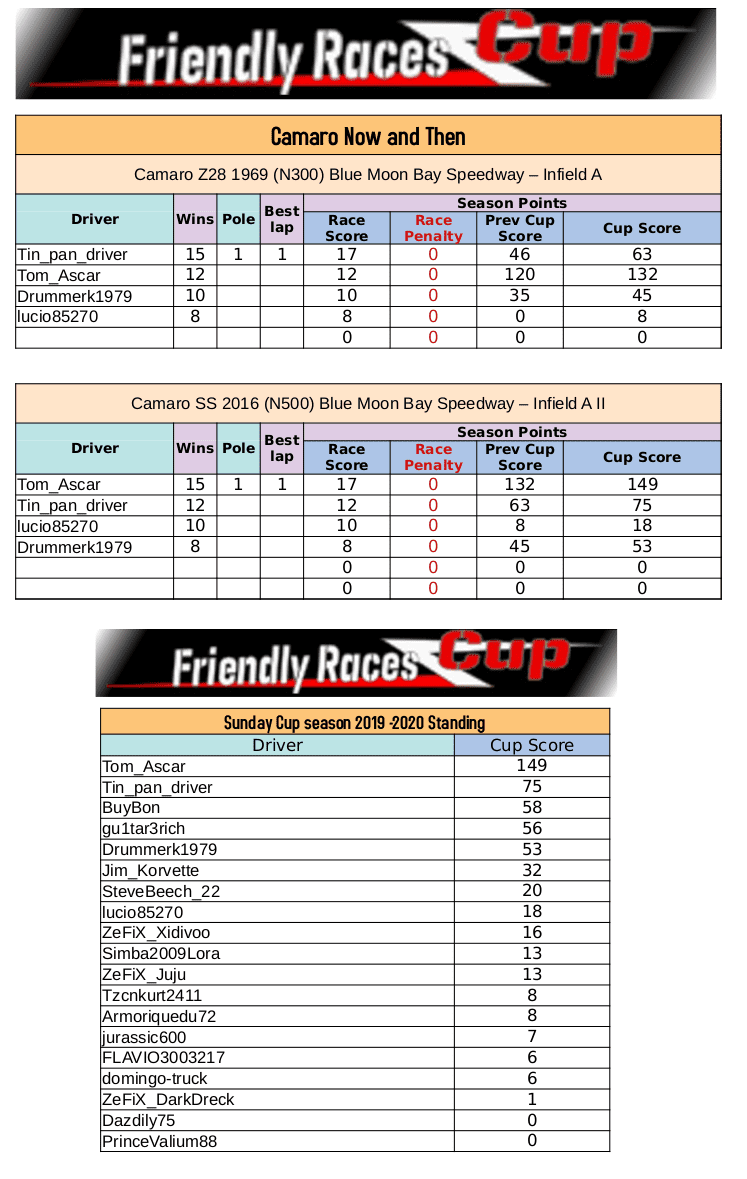 Next Sunday we are back in Le Mans Racing info here

See you on track next Race

I had fun, hopefully everyone comes back for the next set of races! Thanks again Tom for putting this together. 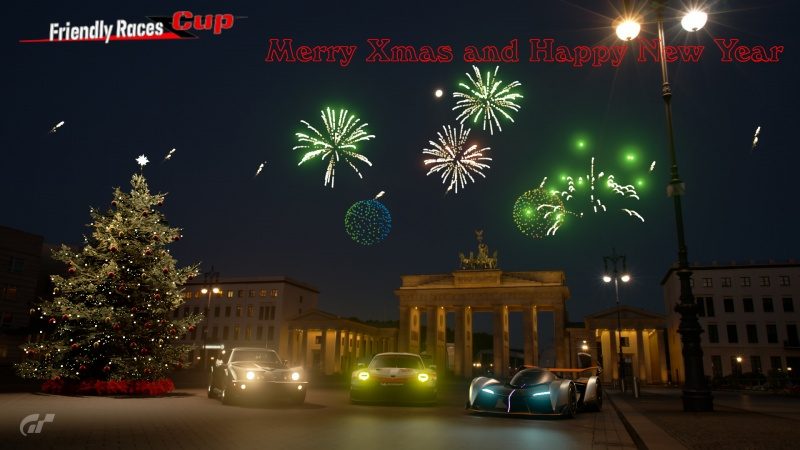 Hi guys unfortunately I have to put our weekly reunion on hold for a few weeks.
Don't worry it will restart on January, and maybe with a Saturday race that could be Muscle Car (I’ll post info soon).

Hi guys
For the middle season standing I decided to make an adjustment regarding on how many races everybody had participated. I did came up with a percent and add-on to the original season point for all drivers that attempted more than one race and not for those who raced 100% on the season. I think it will be fair for the next part of the season and will spice it a little. 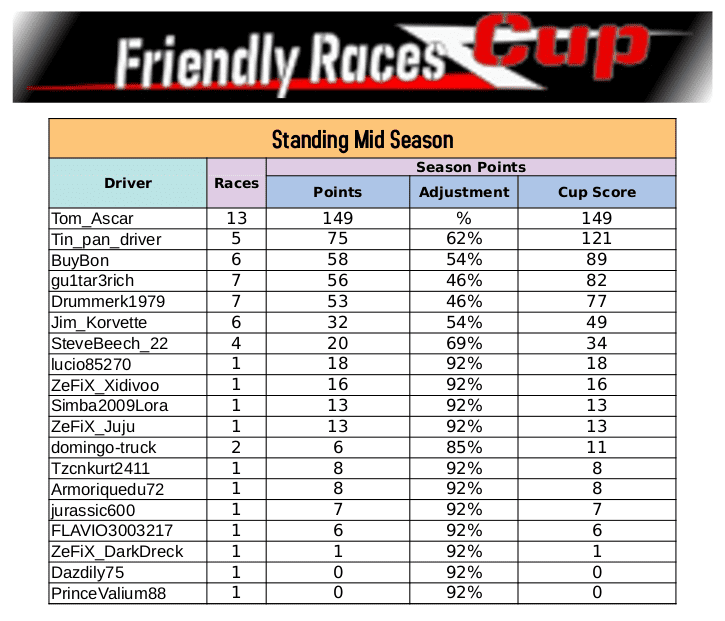 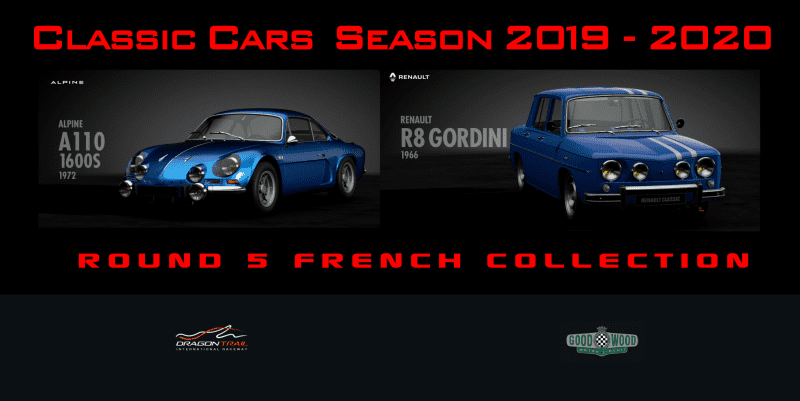 ​
Here we are Classic Car is back for it’s last Round. After that ultimate combo I will set a different one for our weekly reunion among Classic Automobiles and it shall be a Supra tribute on the Nürburgring Nordschleife and Fuji International. I’ll post all information soon.


I hope to see you next Sunday on track


I hope to see you on track