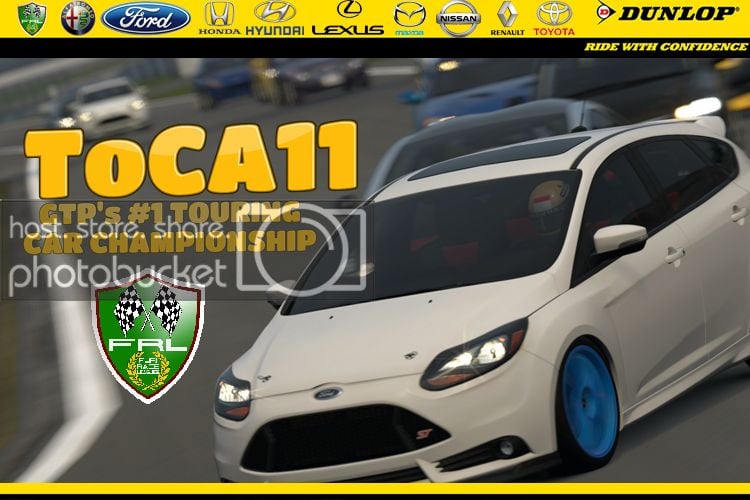 Dropped scores denoted by asterisk next to number.

~Races are held Saturdays nights, with room open from 7pm BST through to 9.30pm. In exceptional circumstances these times may change slightly.~

~To compete make sure you have "Furinkazen" on your friends list - lobby will be set to friends only!~

~Grip Reduction is set to Real~

~Damage is set to Light~

~Mics are forced off~

~In-game alteration of your cars settings through usage of the RA functions are not permitted.

~Draft is set to Real~

~Penalties are turned off.~

~Fuel Use and Tyre Wear is on at a Normal rate.~

~ToCA11 uses a pre-qualifying system in order to make sure the best drivers on the grid are present at each round.~

~The Top 12 in the championship points are locked in and guaranteed a place in the lobby for the 3 points scoring events, these drivers may not enter the lobby until after Pre-Qualifying unless given special permission by me to do so.~

~The rest of the entries have to be in the lobby for the Pre-Qualifying session from 7.25pm-7.45pm. The drivers with best 4 lap times will Qualify for the main races. Times will be recorded throughout the session, drivers may quit track and make set up changes to the car, doing so will not affect the registered lap time.~

~If anyone of the Top 12 is known not be present before race night, that opens up another Qualification slot. Also the 5th place qualifier is advised to be on hand if problems befall any of the main 16 - they may be permitted to start in case of a top 16 runner having to leave or not turning up.~

~All races will be run from a standing start with no pace lap.~

~Set-up changes between races are allowed.~

~This is touring cars so bumping, rubbing and small taps are par for the course. But excessive and deliberate moves across half the track to take someone out are disallowed. Remember still to be fair. ToCA10 Stewards will review incidents post race and take appropriate action.~

~Incidents will be punished by a License Points system. Much like an actual driving license, you will get points on your license for incidents. At 5 penalty points this will trigger an automatic 5 point penalty, at 10 points this will trigger an automatic and 10 point penalty and possible suspension based on a Stewards Review. Penalty Points will be made public so everyone knows where each other is at.

~Poor Off-track conduct in the lobby or in the forum may also result in License Points being received.

~ We will use the BTCC Points System, detailed in this image below:

~You are NOT allowed to swap cars during the course of the season UNLESS you are filling in for a Team. People who sign up as part of a registered two car team must stay on that team, unless they move to another team - in other words - they cannot change to Independent status. Prior to the Season Start please make sure you have decided your car / team, and passed the information on to me. However if it is for reason of changing team or moving from Independent to a Team for example, then this may be permitted~

~Rage-quitters who earn cheap poles subsequently will be penalised. If you wish to stop, pull over off the road at a safe place out the way. However if you DC you will NOT be penalised and forced to move over - it will count as a normal DNF. People who abuse this system may result in License Points being received.

~Mid race chat is not permitted - license points may be added to people who abuse this unless it is for a good reason.~​
Last edited: Apr 7, 2014

~ONLY PARTS THAT ARE MARKED ON THE TUNING SHEET ARE TO BE INSTALLED - ANYONE FOUND WITH ILLEGAL PARTS WILL BE DISQUALIFIED ON THE SPOT!~

~EACH MAKE IS RESTRICTED TO A MAXIMUM OF 4/5 CARS ON THE GRID, DEPENDING ON THE SPLIT OF TEAM / INDEPENDENTS~

~ToCA11 is 8 weeks. All 8 weeks are the main championship events, 3 races per night leading to 24 points scoring races.

Well, I'm pleased to announce that I'll be in for ToCA-11... But who will be driving alongside me?

Find out after the break!

You got 2 mins bud, or I want my money back!

On the posting podium

OUT OF TIME. You failed!

Should be easier to spec check now, since you can now see everyones power, weight, and pp.

Was going to say that but it is true.

Now we can prevent Roflwaffle's.

DrifterJoe
Should be easier to spec check now, since you can now see everyones power, weight, and pp.
Click to expand...

Anyway we are live. Test lobby will be up about 8pm, now to get to work on RPM's presentation for ToCA11!

My 2 Focus chassis are ready.
R

hsv010
Now we can prevent Roflwaffle's.
Click to expand...

3 license points to you.

Erm, @Furinkazen, that's very clearly Dunlop's old slogan, with the most recent being 125 Years of Tyres, so i'm afraid T11 has lost all credibility as a racing series.

hsv010
Erm, @Furinkazen, that's very clearly Dunlop's old slogan, with the most recent being 125 Years of Tyres, so i'm afraid T11 has lost all credibility as a racing series.

Still more credibility than you

. Just sayin' Ford's are all taken, I cannot publish entry yet until @Scaniabebe publishes his drivers!

Anyway we are live. Test lobby will be up about 8pm, now to get to work on RPM's presentation for ToCA11!
Click to expand...

Haven't checked it myself yet, but it's viewable in the member list.

Considering actually entering this time and not blaming anything on my poor choice of car, I promise.

sparkytooth
Considering actually entering this time and not blaming anything on my poor choice of car, I promise.
Click to expand...

Well, you actually own the game now so that is progress

Oh lawd you won the livery war this year.

sparkytooth
Considering actually entering this time and not blaming anything on my poor choice of car, I promise.
Click to expand...

Join meh in a Mazdy!

Oooh, Mazda's are going fast! Glad I booked mine up early....
R

That Mazda is gonna be brilliant. Its almost the same as my test car, just lighter and more powerful. Hope I get one.

Actually you had a Lexus booked. Changed now. Room open.

Just need to update Ford specs and then I'm ready!

Going for the Honda to start with. My programme could be part-time as usual but who knows!

I very clearly changed that in the previous thread.

I'll make up any sodding excuse to get rid of it.

hsv010
I very clearly changed that in the previous thread.

I'll make up any sodding excuse to get rid of it.
Click to expand...