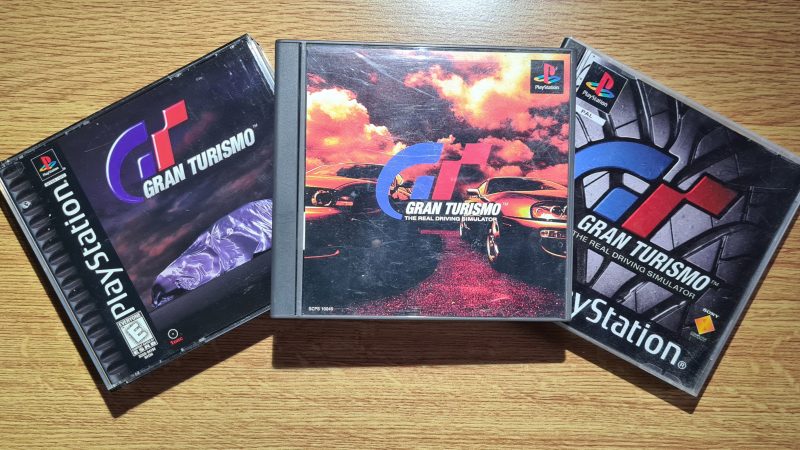 The very first game in the Gran Turismo series launched 24 years ago today, on December 23 1997, sparking a series that has gone on to sell over 85 million copies...

The series is very special to me, as I first played it when my family and I moved to the United States to live with my grandparents and two uncles back in 2006. My interest in cars went back well before the move when I collected Tomica toy cars. One of my uncles had a PlayStation 2. I tried one game first (I think it was Ridge Racer? I don't know, which makes sense considering the following) before I saw Gran Turismo 3 A-Spec. That game amazed me, even though I knew nothing of driving around a circuit, and races intimidated me. Eventually, I bought a copy of Gran Turismo 4, which led to the PlayStation 3 and Gran Turismo 5 Prologue for Christmas, and the rest is history.

I have very fond memories of my brother and I sitting next to each other in our room, grinding through the license tests of the first game. What a great franchise!

Lots of good memories playing Japanese version of GT, around mid-january 1998. I remember my first race: A green Prelude in High Speed Ring. Later, looking into FAQs to learn how to pass the license tests (instructions in japanese, of course...).

I can't believe I have been playing this game most of my adult life. I can remember when this game came out and me and brothers would race against each other and go take turns helping each other get through the license tests. This game introduced me to TVR and Skylines and the whole JDM scene. I can remember tune cars and using the graphic mode for setting the gears ( I missed that in the other games). Such a great series and I can't wait for GT7

The game that turned me into a car guy. So many great memories and many new cars I had never seen before!
T

This game turned a young petrol head into an even bigger petrol head by introducing me to some classic Japanese motors i had never heard of.

Great memories and by far the most influencial video game of my youth.

Gran Turismo 1 was the last game me and my two brothers all played together. My eldest brother was in college at the time. So, he didn't' play as much, but when he would come home, he do race and tune cars with us. He some how tuned an NSX to have no redline, probably remembering that wrong.

He better understood the settings and how it all worked then mean my other brother, who is also older than me. He even had his own garage of cars that he wouldn't let us touch.

It was me and my second older Brother who really dug into the game though. Helping each other through the license test, proving to learn the manual transmission and the many attempts in tryin to get the 7 geared purple Supra (think you won the car from the normal car race?). We would take turns doing stints on endurance races as well as helping each other out on tough races on our own files.

They don'y play games anymore, just me. My eldest Brother pretty much stoped after this time and my second eldest stoped around GT3. So I will always remember playing Gran Tursimo 1 together with my brothers as great childhood memory of a time long gone.

GT7 is shaping up to bring back some of that magic. Let's hope it's a great one.

I can remember trying to tune the Escudo Pikes peak car.

Tweaking a gearbox to try and win Grand Valley.

El Capitan was just awesome... Despite the horrible graphics.

Then... Discovering that by changing the oil, you could gain extra BHP! Woweee - Like no one knows about this trick?

A Tank car? Really? Totally impossible to drive at anything more than 50 MPH. Then you discover that some "dude" can drift the infernal thing at 5,000 drift points per metre. WTF!!!

An F1 car! A Gran Turismo F1 car that could enter just about any race and lap everything and win credits so you could tune up your Mitsubishi Evo.

An SRT Tomahawk... A car moving so quickly that even my screen rate could not keep up with it!

Happy Birthday Gran Turismo. Merry Christmas. Thank you for soooooo many happy memories. Looking forwards to whatever else you bring for us... We all know that it will be great fun!

Best regards and seasons greetings to all here.

Still the best GT intro. The cars revving and peeling out. The Primera and Sprinter RMs at night. The Accord and Supra spinning out. Seeing the SVX hop off the curb. So much joy doing the GT300 race at Grand Valley. A couple years of good fun, until GT2 debuted.

Personally the series didn't find itself until Gran Turismo 5, it's one of my all time favorite games.

Here is a video that advertised the 10th Anniversary of Gran Turismo.

I went to visit my friends one weekend back in 98, a tiny village in the countryside in between Glasgow & Edinburgh. Got to play Gran Turismo on the PS1 for the first time.
Grand valley it was & despite the warnings I did indeed end up in the kitty litter at turn 1. It was the replays that made my jaw drop, I just couldn't believe how fluid & realistic (for back then) they looked.

Got back home to Glasgow on the Sunday night & must have done a smashing job of selling it to my flat mate Stoo who had a PS1. When I awoke, early Monday afternoon (c'mon, I was overly refreshed that whole weekend) I could hear him playing GT1 from my bedroom. He'd got up early, went to the video rental store, remember them? We had it for 2 days and hardly slept. Took it back & re-rented it for another 2 sleepless days.

3rd time a charm, he came back with a purchased copy & so began 24 years of us trying to better each other. I've got the upper hand in Sport, he had it in 5 & 6.
Told him at the weekend it was coming up for it's 24th anniversary which made him feel very old... was also his 59th birthday party which didn't help either.

Considering USA version covers are typically less imaginative, Gran Turismo's is a true exception. There is something completely enigmatic about the US cover -- the mysterious covered car and an ethereal dark sky. Brilliant!

I've been there since the beginning. Only racing series that really clicked for me.

Coincidentally i scheduled GT1 intro to appear today! That must mean something.
Much better quality thanthe one in the article

Bought a Playstation and GT1 in January the following year. Me and my roommate played it every single day for a long time until we both moved elsewhere. I kept playing since it was my PS and game. Been playing ever since.

I remember that Gran Turismo was one of the two games I bought when I got the PS (ORIGINAL) for my stepson, forgot what the other game was because it never got played, my stepson really was not into gaming at the time and i got into it and it got into my blood. 24 years later im now waiting impatiently for 7 to release...
Happy Birthday GT

The first time I played GT was in a night club. Brilliant marketing, bunch of playstations set up to little tvs in the lounge area for a quick race before getting back to the dance floor. Not long after we bought the game and played it split screen after the clubs closed at night (no success with the ladies lol)

The matches always ended with a "you go first" into the last corner. Drunk dirty driving was the norm

I didn't really get into the single player car rpg part until GT3 A-Spec.

Congrats Polyphony Digital and Kaz and GT!!! I hope GT7 will have a difficulty slider for races (E.G. AI speed/Penalties On-Off/Realistic Handling On-Off and the such.

Glad to have met the main man