So my Steam copy of GTA V has been bricked ever since the Rockstar launcher went live (numerous attempts to salvage have not succeeded) so I was browsing the Xbox Live store (for my One S) and saw that GTA SA was available for $10. I thought...what the hell, it will probably be a big let down versus my nostalgia, but it's only $10.

I've long considered GTA SA to be my favorite entry in the series, but have not actually bothered to go back and play it since IV was released, let alone V. I was very curious to see how it would stack up. I'm playing the game on my 55" 4K TV.

Let me get this out of the way first. The graphics are hilariously simple vs contemporary games. I won't say they are bad, because they are from 2004 and that's not quite fair. For the time I think they were probably fine, if not remarkable. Once you get over it, you don't notice too much...the only problem is the non-smooth nature of the roads due to the chunky polygons, which definitely adversely impacts the game. Those freeway onramps are a real nightmare. More than the quality, you do get a sense that some areas of the map don't quite feel finished. The area west of Los Santos in particular has a kind of emptiness that feels like a result of running out of time rather than hardware limitations or artistic choice...I could be wrong. The other two things that haven't aged as well is the vehicle sounds and the on-foot controls, which are both not great. Free-aim is basically impossible, and the strange loopyness of the car engine audio is a bit jarring. Some of the gameplay feels gratuitous...like trying on clothes or buying food is a huge pain in the ass with no real immersive gain.

That takes me to things I was pleasantly surprised with. The first of which is the atmosphere, which is bordering on magnificent. The color pallet (though toned down vs the PS2 version I played when new) is just perfect for the narrative they are trying to tell. The environmental effects (fog in San Fierro, Sand in Las Venturas) are actually quite immersive/believable and further the atmosphere. There also always changing, which is an impressive feat for 2004! It feels like a living world in a way that I didn't expect.

The car handling is not actually as bad as I thought it might be. There is some kind of physical engine going on there, and suspension works...though not quite always the way you expect. Some cars have a tendency to bounce during acceleration on straight flat roads...I don't know why. The off road physics are actually not bad. I enjoyed driving the monster truck a lot. Bike physics are ok. Sports cars are the least realistic / least fun to me, and so I pretty much avoid them.

The story is great...probably still my favorite of all the GTAs. Just kind of pulpy enough to keep things entertaining, but with really interesting, funny, and decently deep characters and a plot that is compelling within the world Rockstar created. The voice acting is stellar...I mean Samuel L Jackson! David Cross! Peter Fonda! How did they get these guys back in 2004? The peripheral characters in SA are far and above any other GTA game, including V. I actually appreciate the dialogue and context a lot more now than I did when I was 15 years old, and I'd be curious to know how many of SA's initial customers were completely oblivious to the various cultural references throughout the script of the game. Another reason to replay! (Especially true with the post-berlin wall fall undertones that Mike Toreno is always blabbering about).

So we've all seen the maps that compares GTA V to GTA SA. 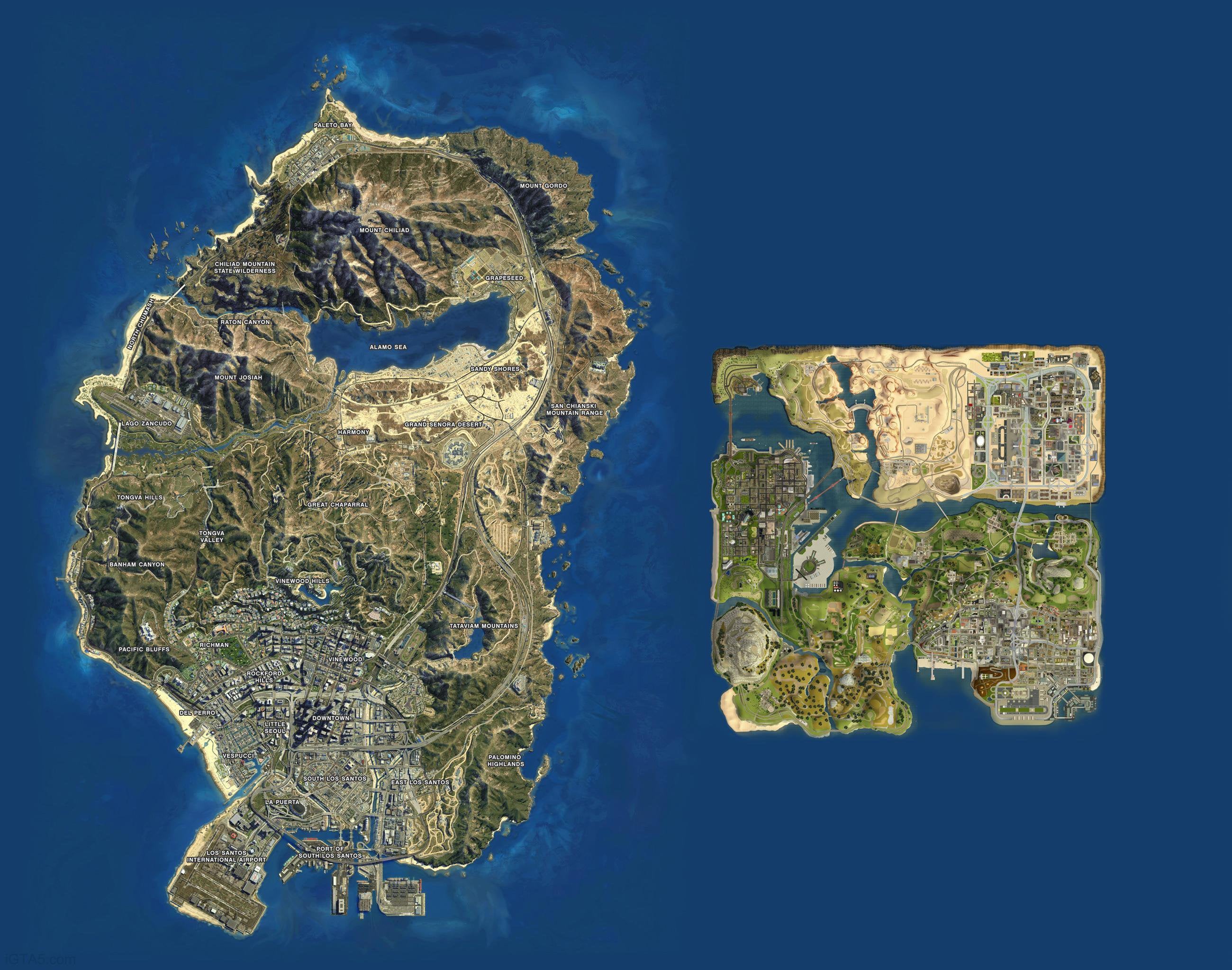 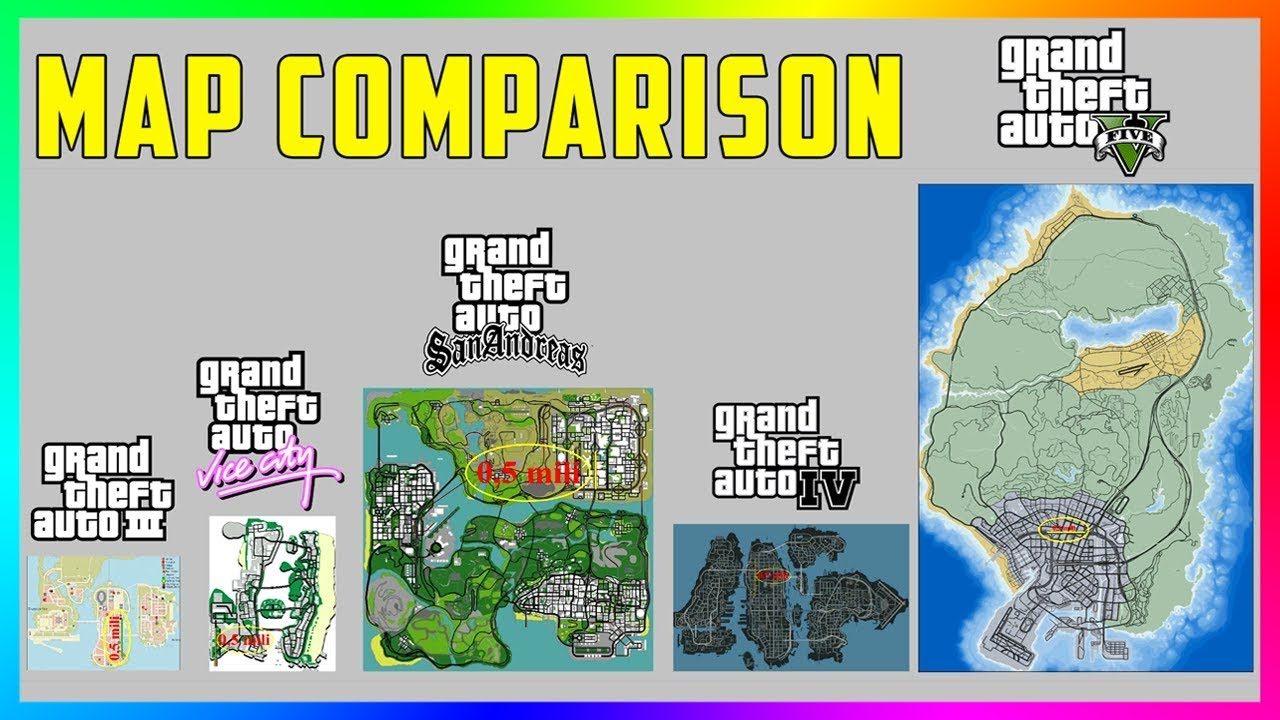 They're all different and I don't know the methodology of the comparison. I might have to do it myself. The point is that V is much, much bigger.

So it should feel small...even tiny right? The weird thing is that it doesn't. Maybe its that more of the geography is more accessible (there's a lot of map area in GTA V that is basically fly-over territory/pretty backdrop only) and maybe its that there is a permanent distance-obscuring fog, and maybe the cars are slower, and maybe there is a great variety of landscapes. (Part of me thinks that in GTA V you're typically viewing the map from the narrow corridor of the main highway that circles the island and have less reason to take secondary roads, vs SA where you pretty much have to) Whatever it is, GTA SA does not feel appreciably smaller than GTA V while playing. It somehow actually feels more grand, even from a 2020 perspective. If you look at urban Los Santos in the above map, the core of the city is not actually much bigger in V vs SA. Yes there is a lot more substantial "Vinewood Hills" area, and yes the port and the airport are far larger, but GTA SA's Los Santos still feels good. If you add in the other 2 cities that SA has, the total urban area is probably close to a wash. The GTA SA desert is a much more interesting place than the GTA V desert, with the rock formations, the dam, the settlements, the military base, etc. If you look at the map, the desert areas roughly the same size. All in all, Rockstar was clever about how they used their likely-hardware-limited available area with SA and even in 2020, it is a great map. The real penalty of age for the GTA SA map is the level of detail. Vegetation is sparse and simplistic, and the actual geometry of the ground is pretty....unrealistic. It doesn't really feel like nature when you are out in it, unfortunately, and there just isn't much immersion compared to V. If only they could remaster the game with updated visuals...

Other random things:
-I quite like how many properties are available to buy in SA, though I haven't yet acquired enough money to buy more than a couple.
-The GTA SA Sandking is a badass machine.
-K-Rose is the best country radio station in any GTA game
-Las Venturas is genuinely a fun place to visit
-San Fiero feels reminiscent of San Francisco...but they didn't quite capture SF. Its missing cultural context, a lot of soul, and the layout of the city is pretty far from the real thing. It feels wrong to me whereas LS and LV feel right. Map-wise, its the biggest letdown of the game - it feels kind of empty and dead. I hope they do a future game in SF and do it justice.
-There's a little too much gratuitous killing. It breaks the immersion for me when you get ordered to kill somebody for petty reasons and Carl unflinchingly agrees, especially as the story hinges around his framing for a murder.
-The gym and eating mechanics are actually kind of fun. It should be brought back in some capacity.
-I think its more fun to do a digital road trip in SA than it is in V, just for the diversity of things to see.

I've been having a blast playing GTA SA after several hundred hours in GTA V/Online. Its a 15+ year old game and it shows. But once you get into the game, it's really lovely. Again. I recommend a second go.
M

Interesting comments about the map. I know that technically it's much much bigger, but I always felt like the GTA V world seemed somehow smaller to me than San Andreas. There's a lot of stuff there, but there doesn't seem to be a reason for much of it and it just felt empty to me. I never got that feeling from SA, there's plenty of open areas with nothing particularly important but it all seemed to have some sort of value beyond vague scenery in the distance. Hard to explain. It was just more fun to go places and do stuff. In GTA V you go out there and just want to go back somewhere interesting. Once you found the airport and drove to the top of the mountain it all kind of only has value as potential racetracks.

And I know what you mean about San Fierro. I mean, it has hills and everything... but it just felt like a city. Somehow lacked the inanimate personality that Los Santos and Las Venturas somehow had. But maybe I'm just unfamiliar with some of the references to SF(and there certainly were some). It was fun to drive around though.

On foot movement/targeting has always been wonky yeah, I think GTA V is the first time it really started to almost work. The earlier games felt like a series that started as a top-down and got moved to 3d and they didn't have anybody that really knew how to do it but it was at the bottom of the priority list. Driving I've felt like has been steadily improving in each installment of the series, it was iffy but mostly workable... each time it got better to me even if there was always people who thought the old way was better. But walking and shooting seemed like they just didn't even care until GTA V.

I also feel like GTA V almost completely dropped the whole "whimsical" goofiness that always was a welcome - if steadily diminishing - undertone to the other games in the series which was a bit of a let-down, but that's a whole different subject. I'll just say I personally liked the mixture of super-seriousness and complete unabashed clownery to balance it out.

I haven't played GTA SA in a long time now and I possibly never will... but I'll always want to. I went back and finished IV(still need to do the expansions) finally but there's so many other things on the nostalgia/unfinished list.

Morgoth_666
And I know what you mean about San Fierro. I mean, it has hills and everything... but it just felt like a city. Somehow lacked the inanimate personality that Los Santos and Las Venturas somehow had. But maybe I'm just unfamiliar with some of the references to SF(and there certainly were some). It was fun to drive around though.
Click to expand...

San Francisco, in real life, has a very strong axis along market street - a long wide diagonal where the two different grids of the city meet. It's basically the spine of the city and a huge part of the urban feel. That it doesn't exist in San Fierro is very jarring for me as a weekday San Francisco resident, as you can basically align yourself on the east side of the city by your proximity/orientation to market street. (below highlighted) 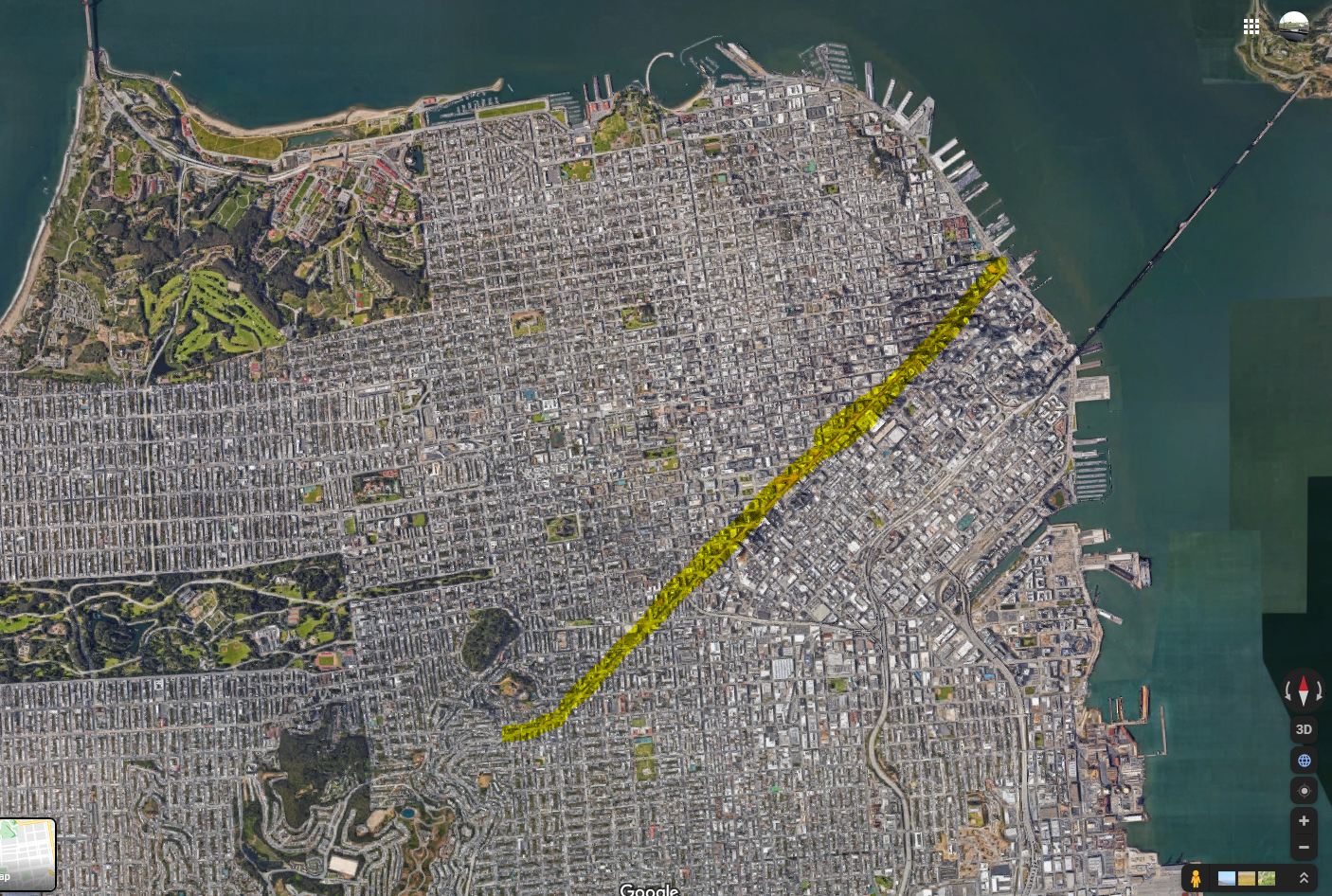 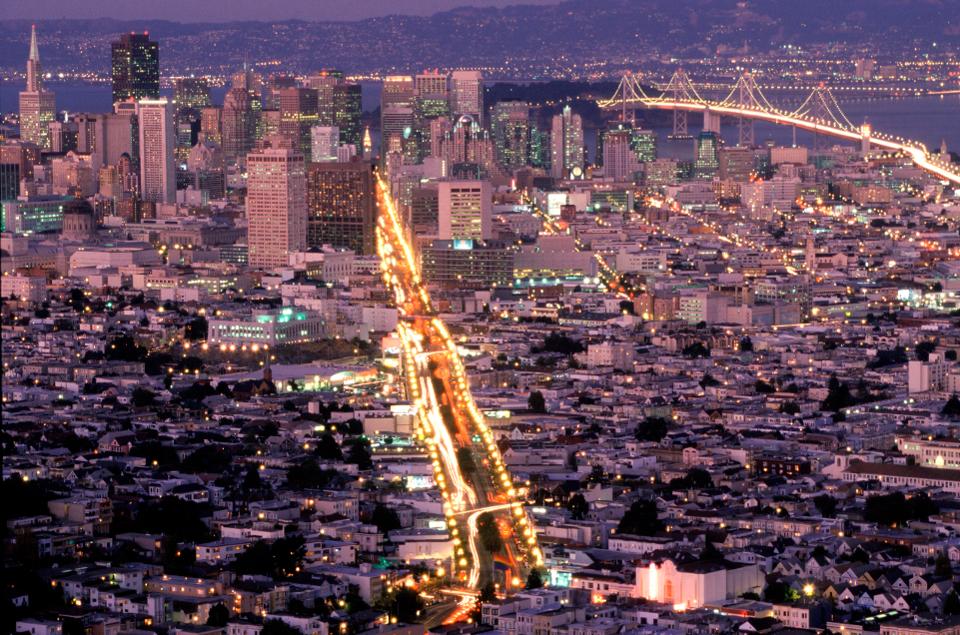 It also terminates at the Ferry building (which is pretty faithfully recreated in GTA SA) which you can see lit up in the image above. It would be like doing a facsimile of LA without Sunset Boulevard, Las Vegas without the strip, or New York without Broadway.

Other than that, the complete lack of anything resembling the Mission district (which would have been very interesting in the early 90s) and much in the way of SF based characters...it just felt like an afterthought.. I think Rockstar wanted to tell a story about LS and LV and SF was included mostly for extra scenery.

Favorite GTA in the series?