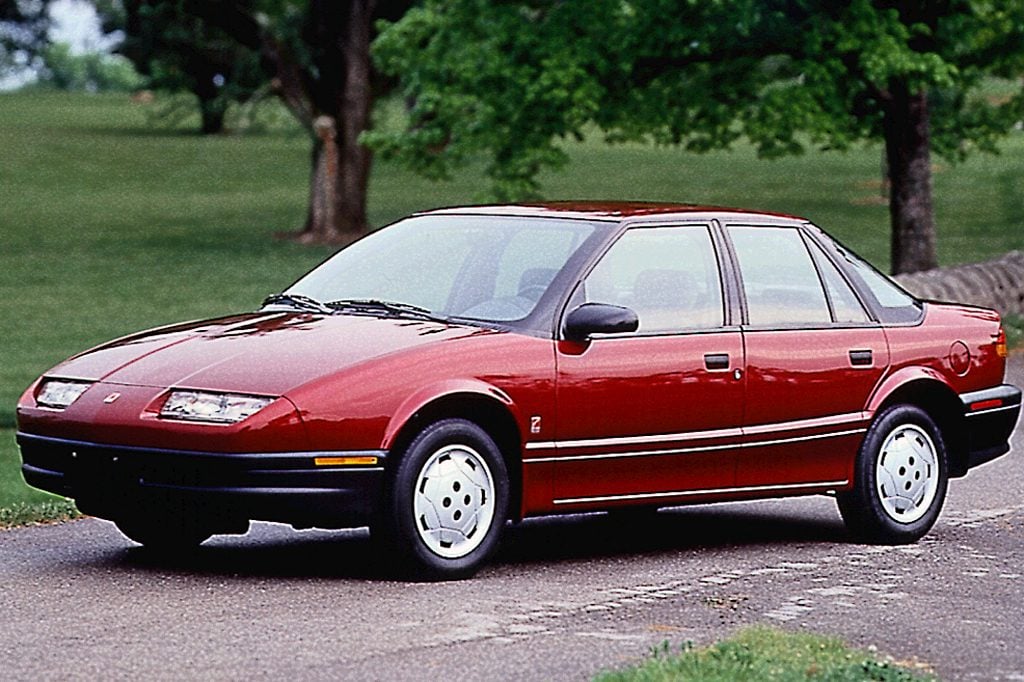 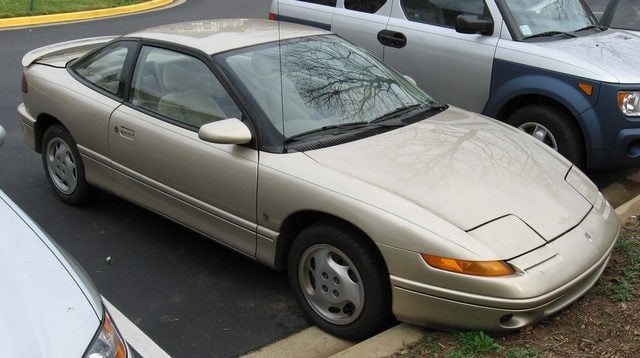 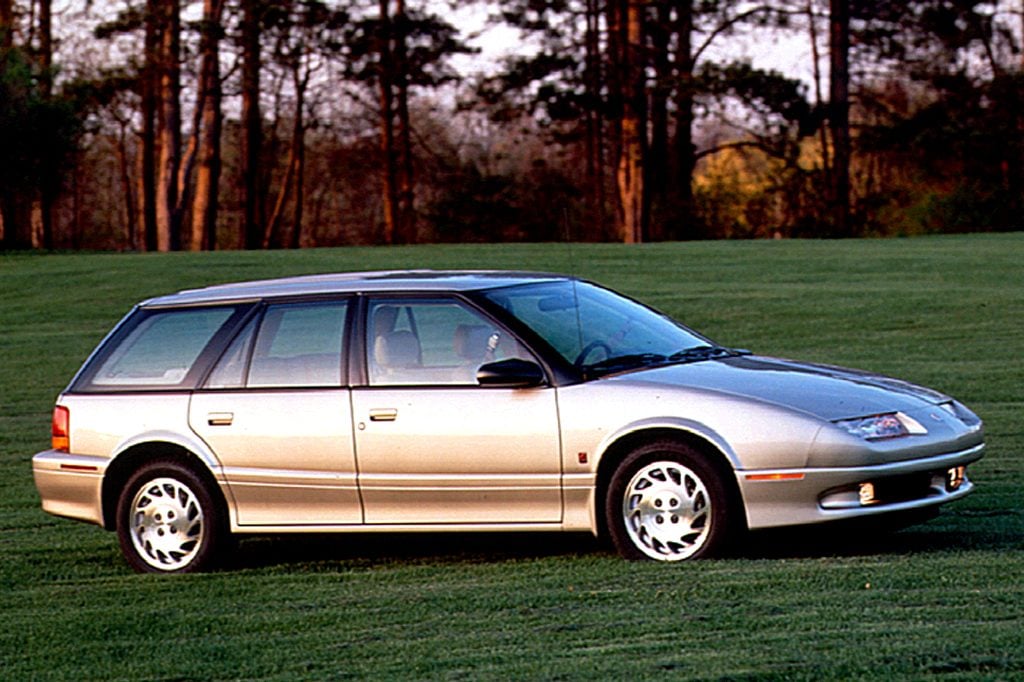 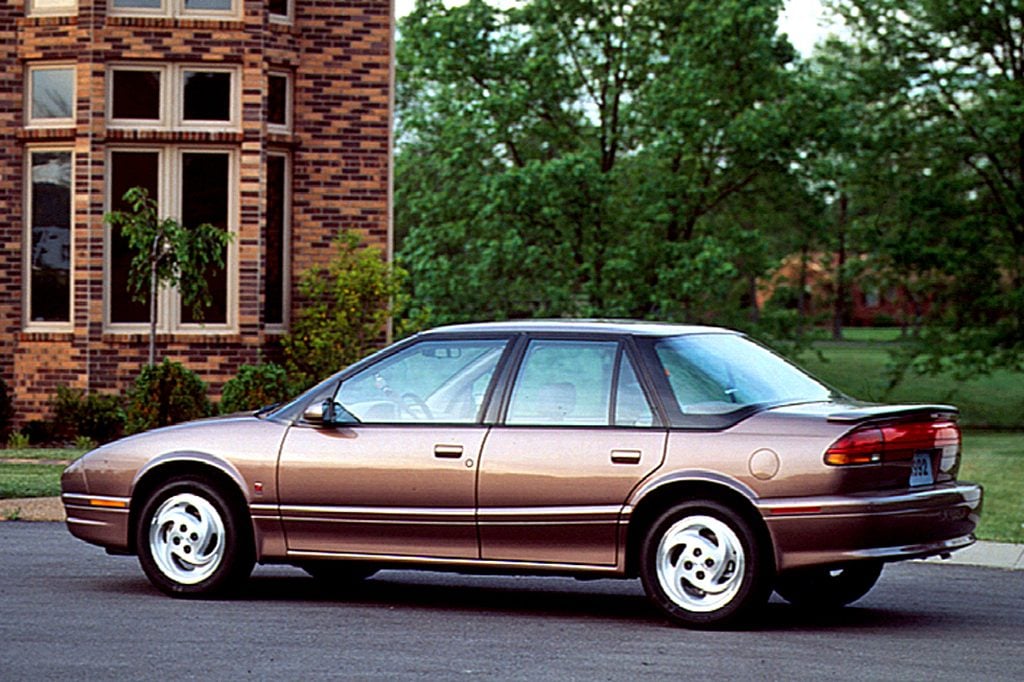 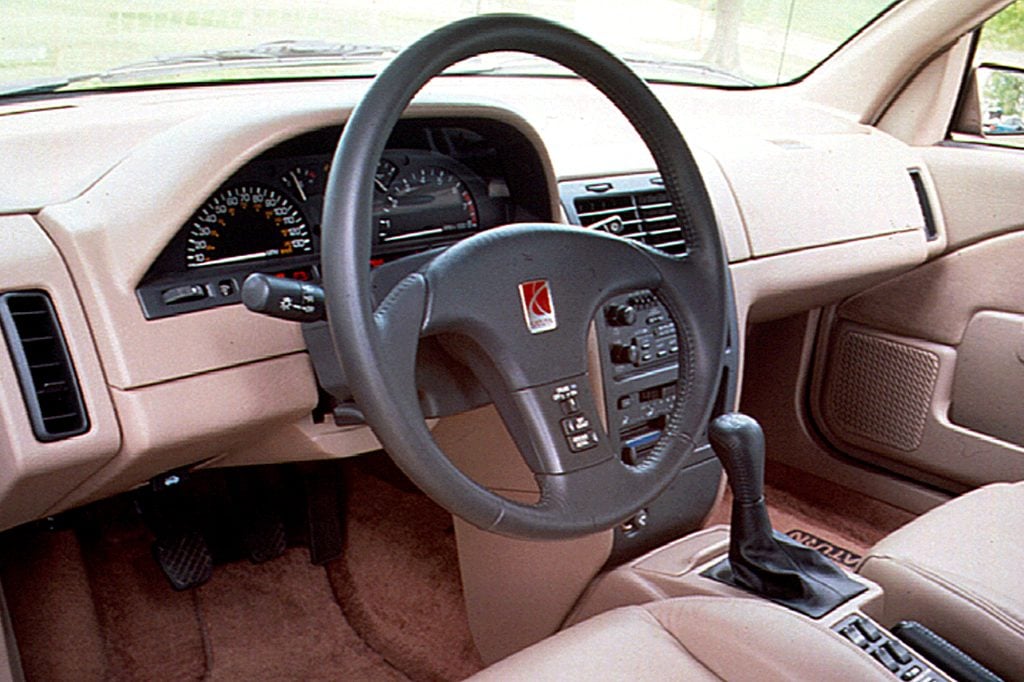 Not the greatest car, for sure. But it has an interesting '90s look to it, plus cheap wagons are fun, so that brings it up to a meh for me.

These cars would seem uncool in the eyes of many today. I never cared for Saturn until they started making decent-looking, actually interesting vehicles starting in the 21st Century. Best-ever Saturn to me in that time was the Saturn Sky, the Saturn brother of the beautiful Pontiac Solstice. As for this, though... highest I can go is "Meh." But my call will be Uncool since I'm not really convinced about any 1990s Saturn.

It's amazing how much investment, technology, and care actually went into making these cars. GM spent about six billion dollars to create Saturn, completely from scratch; the engines, chassis, design, interiors, and many other parts, as well as the Springhill, Tennessee factory, was completely unique to Saturn. These cars had build quality, fit-and-finish, and refinement that was better than any of its Japanese competitors, save the EG Civic. They were a far cry from the Cavalier or Sunbird. People who bought the original Saturn cars were very satisfied by them and took pride in owning a Saturn. Even being pricier than any other non-luxury compact car, and that Saturn was not known as a brand very much, the S-Series sold on average 200k-300k units per year, for the first generation. The main criticism of the first-gen S-Series was that the exterior styling was kind of dated (after all, the design did date back to 1985), and somewhat on the ugly side. I personally think the first-gen S-Series is a decently good looking car, mainly because how radical the styling was compared to its competitors, let alone other GM products. Though it does kind of look like a miniature version of a 1990-1997 Oldsmobile Cutlass Supreme from some angles.

Of course, where Saturn went downhill is when GM threw less money at the brand. Some GM execs believed that far too much money was going to the Saturn project than was necessary. So, when GM slashed Saturn funding, you saw a second-gen S-Series that was arguably worse than the first-gen, and quite dated by the early 2000s, as well as boring rebadges of other GM products such as the L-Series and Aura (Vectra), Vue (Captiva), Relay (Uplander), Sky (Opel GT), Astra (Opel Astra), and Outlook (Acadia). The Ion, the only non-rebadged Saturn other than the S-Series, shared nearly all of its parts with Chevrolet and Pontiac products of the time, and was known for having an atrocious interior design. Such an uninspiring array of cars is the reason why Saturn sales slumped. Why buy a Saturn when you could just go for an analogous Chevy or Pontiac that's likely cheaper, anyway? For the 1st-gen S-Series, there was nothing quite like it compared to other GM products, and that's what makes it so special. Hence the brand's slogan, "Saturn: A Different Kind of Car Company".
Last edited: Feb 4, 2021
N

somewhat interesting but not enough so meh

It almost looks interesting to me. Almost.

Cars like this really remind me of backwater crumbling towns and forgotten suburbs from my childhood. You'd see Saturns with several different colours of body panels from all the accidents they got in, if they were ever even fixed in the first place.

I was fortunate enough to be raised in the nicer parts of one of these forgotten backwater towns, but the rough parts were, well, rough.

Send this one to hell.

The older these get, the more interesting and uncommon they are especially in good shape. A perfect low miles example is a low cool. Otherwise it's just an ordinary uncool car in my eyes.
My opinion will probably change in the future years.
Last edited: Feb 5, 2021

Balances out to a Meh.

GM should gets points for tackling the popularity of Japanese cars head on. They should then have them removed for GM'ing it up and removing everything that made the brand special in their later models.

I like the boldness of the styling but at the same time it looks a bit amateur in its execution. I think I'll give it a low cool.

I mean, they tried to do something new, but it doesn't mean it's that cool of a car.
Meh, but I appreciate the styling in a way.

The generation that had the Pointiac 6000/Oldsmobile Aurora front end,were okay. The SC was fine. As a race car too.

Attractively styled big family car from the days when those still existed.

Roger the Horse
Attractively styled big family car from the days when those still existed.
Click to expand...

The S-series was far from big. In terms of length, it was at the low end in terms of compact cars of the 1990s.

GranTurNismo
The S-series was far from big. In terms of length, it was at the low end in terms of compact cars of the 1990s.
Click to expand...

Looking up the dimensions it's slightly smaller (by a few millimetres) than a Ford Sierra. Nothing small about it.

Roger the Horse
Looking up the dimensions it's slightly smaller (by a few millimetres) than a Ford Sierra. Nothing small about it.
Click to expand...

I guess if you’re from UK where every other car on the road in the 1990s was a Corsa or Fiesta or Metro, the Saturn would look big. In the US it was smaller than most cars on the roads.
Last edited: Feb 19, 2021

GranTurNismo
These cars had build quality, fit-and-finish, and refinement that was better than any of its Japanese competitors, save the EG Civic.
Click to expand...

Let's not go overboard. It was worlds better than the Cavalier and the garbage pre-Mazda Escorts, but the quality of the end result certainly wasn't consummate with the 8 years and 4-5 billion dollars they spent developing it; and in fact is one of the main reasons GM nearly went bankrupt almost immediately after it debuted.

They weren't even the best compact car you could get from GM, since they would happily sell you rebadged Corollas at your local Chevy dealer for the entire life of both generations of the S-Series (since the NUMMI venture was what gave GM the idea for Saturn in the first place).


Roger the Horse
Looking up the dimensions it's slightly smaller (by a few millimetres) than a Ford Sierra.
Click to expand...

Tornado
Let's not go overboard. It was worlds better than the Cavalier and the garbage pre-Mazda Escorts, but the quality of the end result certainly wasn't consummate with the 8 years and 5 billion dollars they spent developing it; and in fact is one of the main reasons GM nearly went bankrupt almost immediately after it debuted.
Click to expand...

Though it does say something that out of all early 1990s compact cars on still on the road, the S-Series seems to be the most common one, at least in my experience. They may not be "common" so to speak, but even Japanese compacts like the Corollas and Civics and Sentras of this age are starting to go extinct, while the Saturns are still holding their own. Cavaliers? Shadows? Escorts? Geo Prizms? Forget about it.

In the last month and a half I saw four first-gen S-Series' in my town, three of which I photographed. For a car that's pushing 30 years old, that does say something about its reliability. 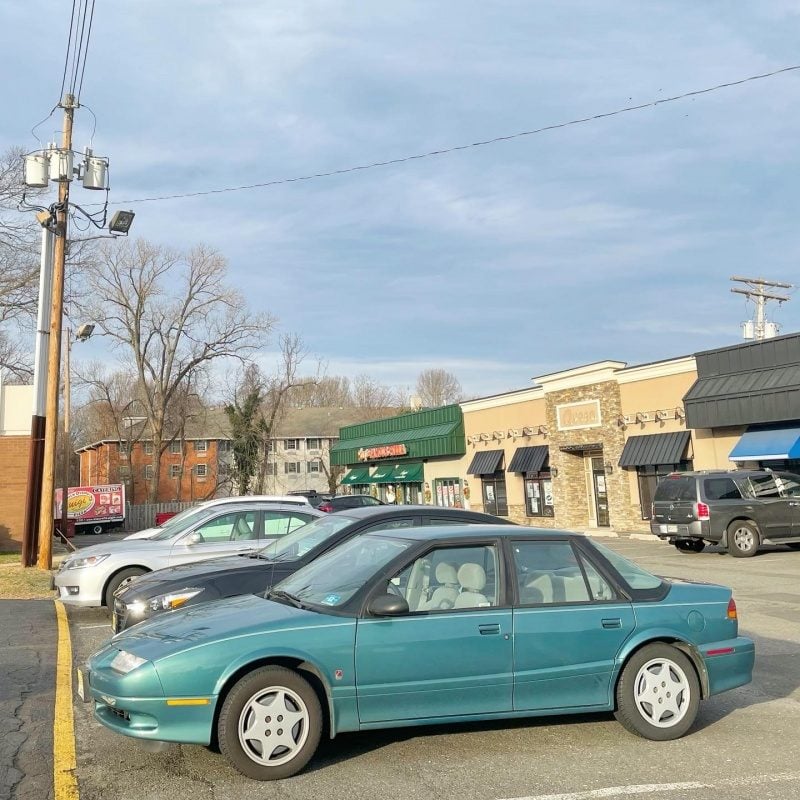 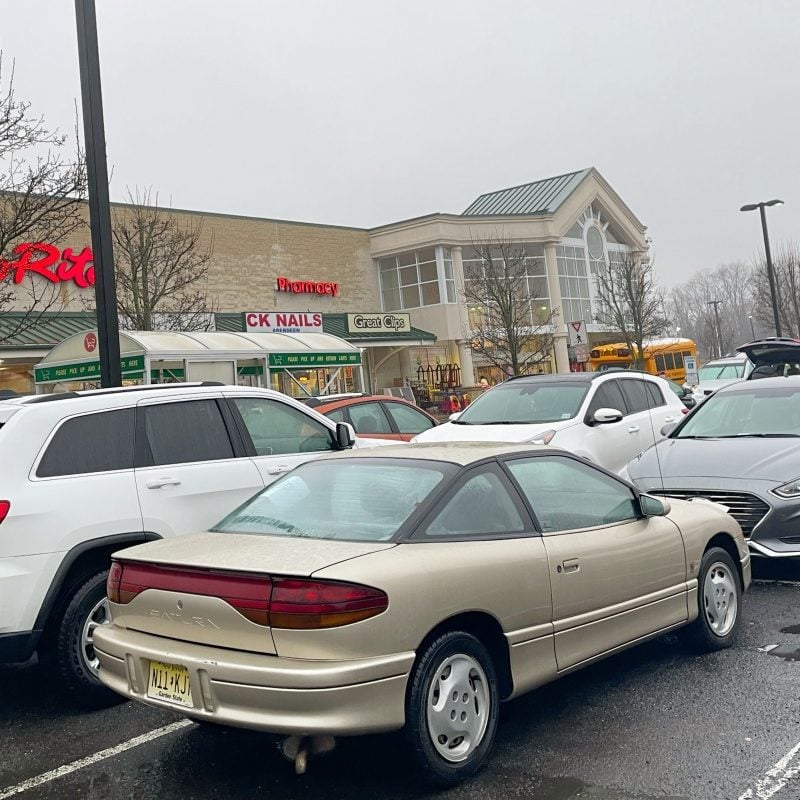 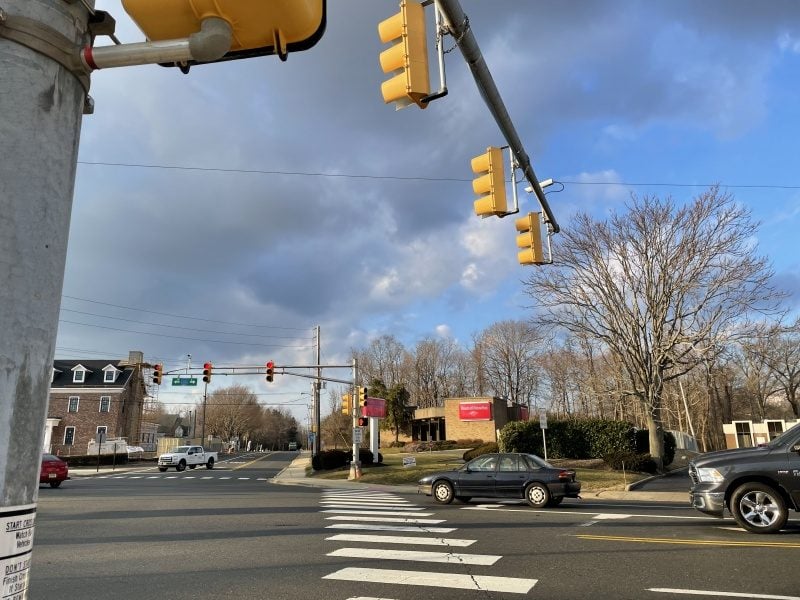 That's because they use timing chains and they don't visibly rust. Mazdas of that era started rusting while they were still on dealer lots and Cavaliers and Chryslers of that era were falling apart before they loaded them at the factory.
Last edited: Feb 19, 2021

Come to think of it, I don't think I've ever seen a rusty Saturn before. Heh.

GranTurNismo
Come to think of it, I don't think I've ever seen a rusty Saturn before. Heh.
Click to expand...