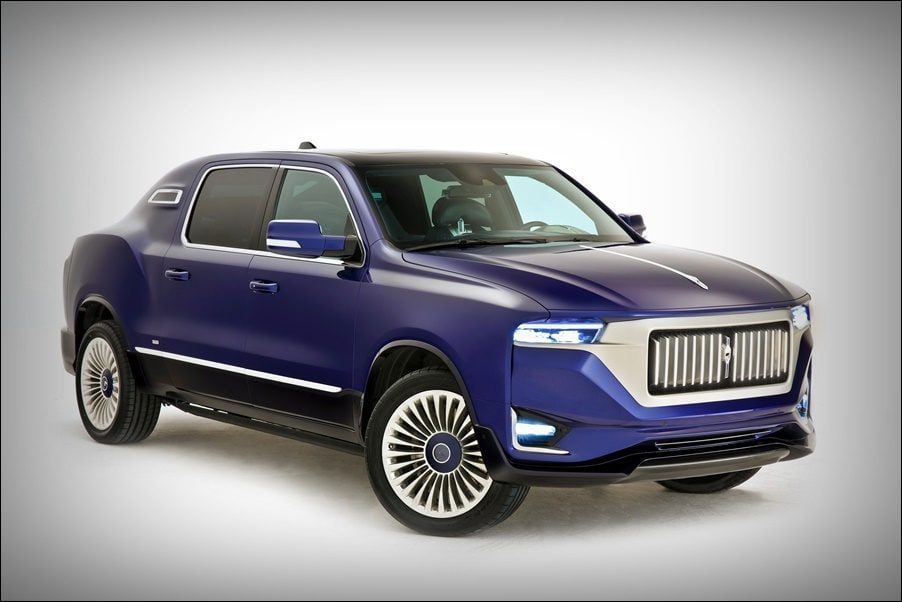 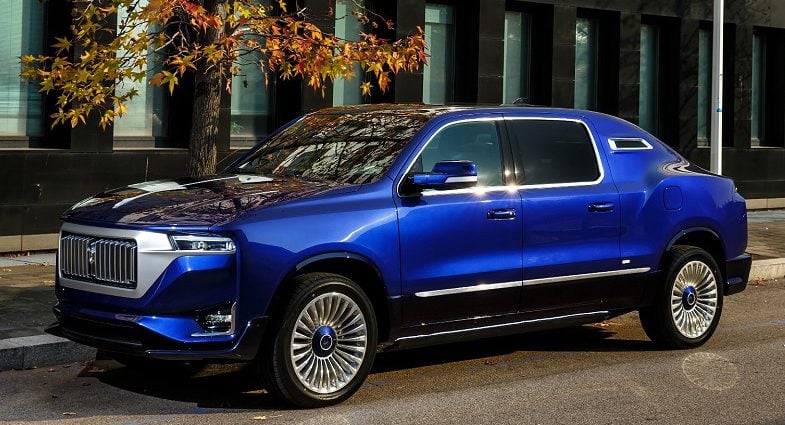 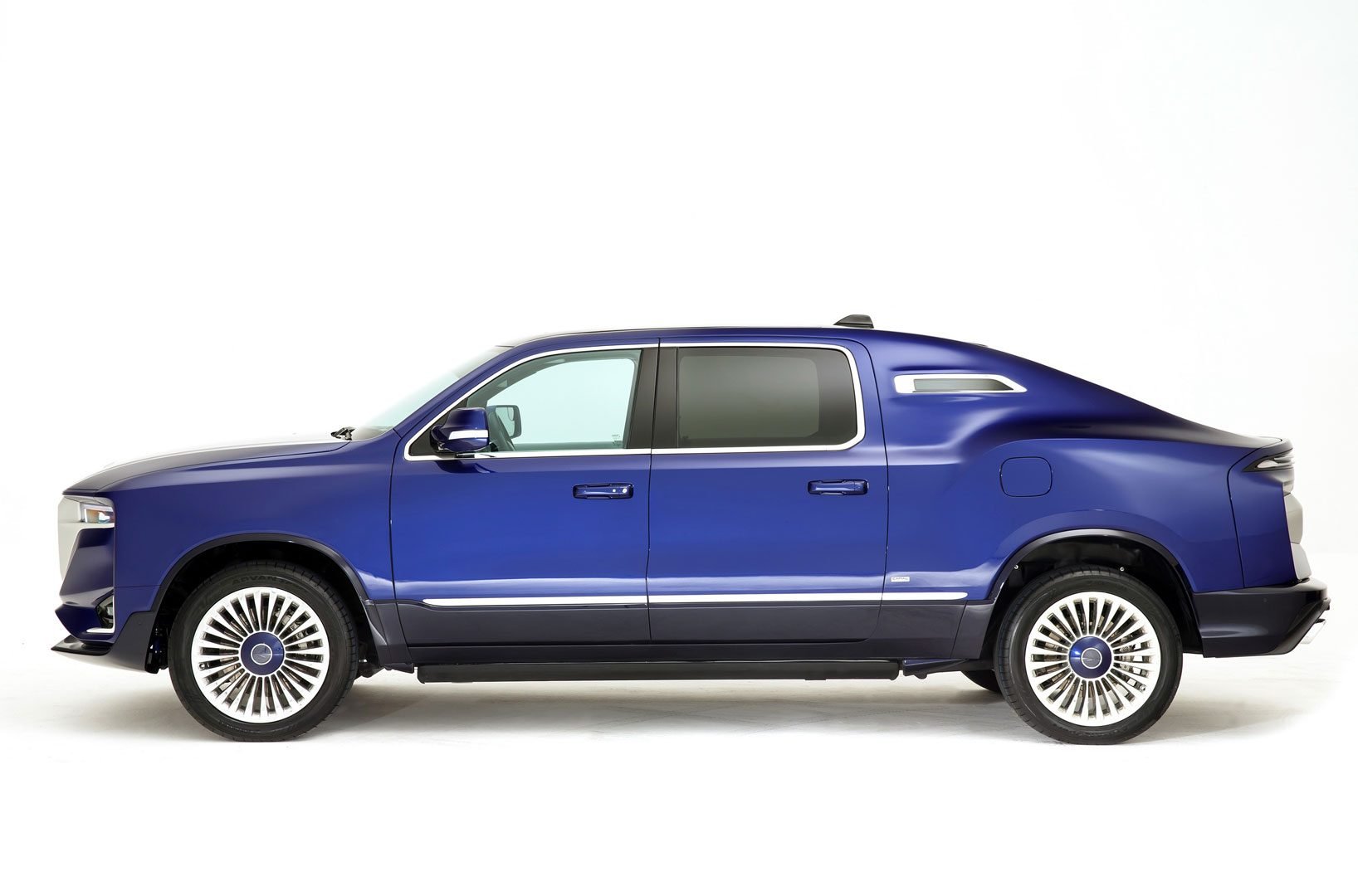 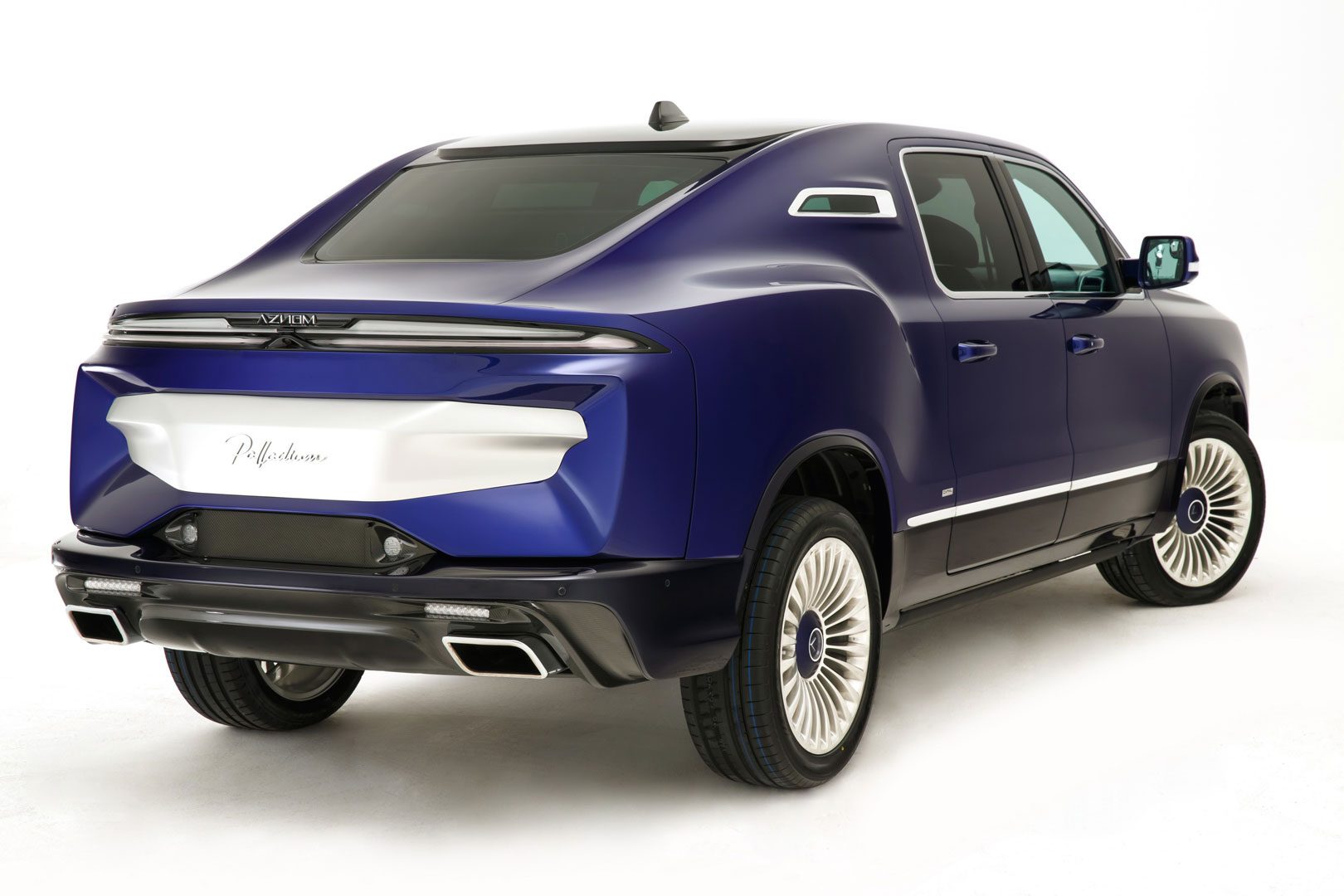 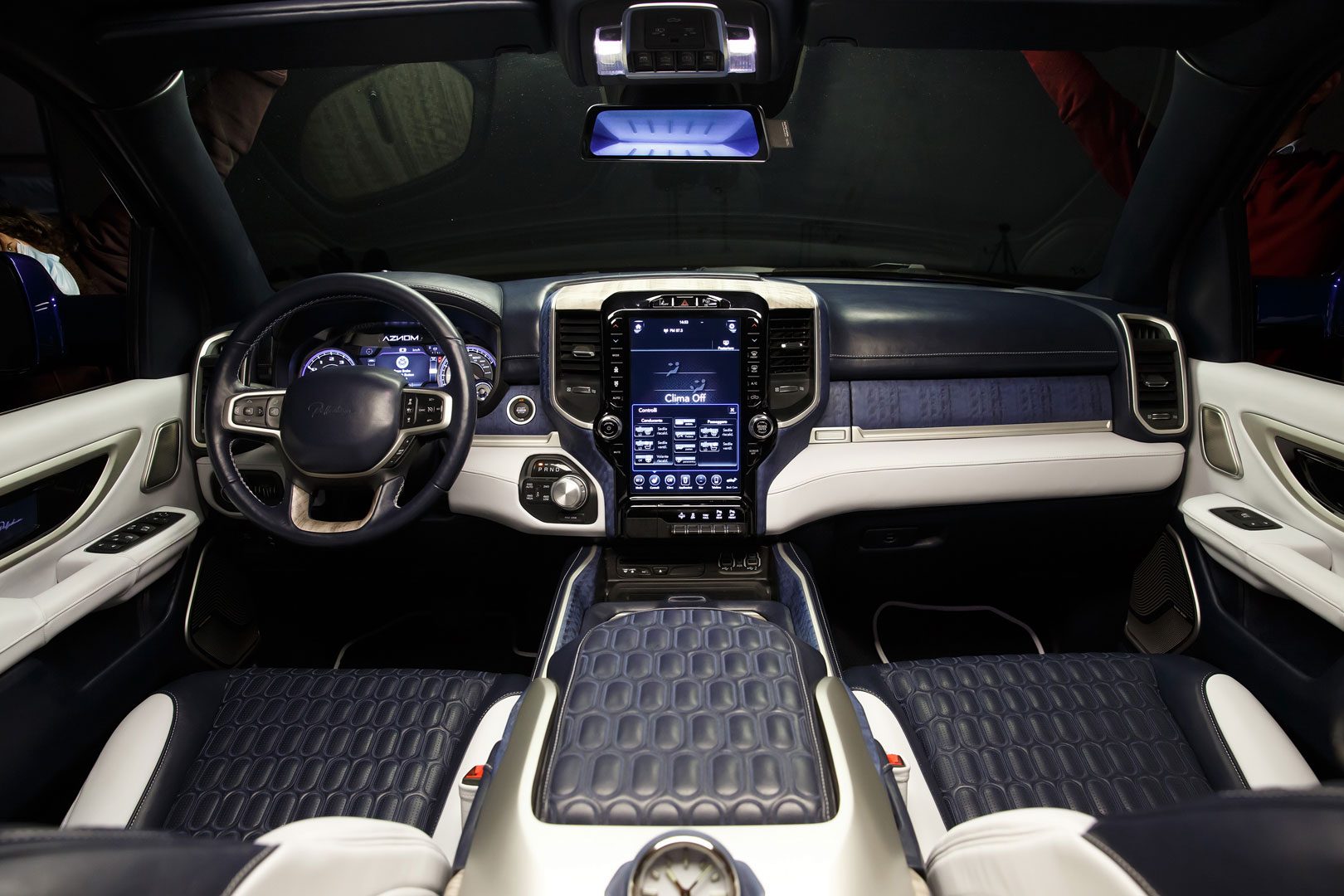 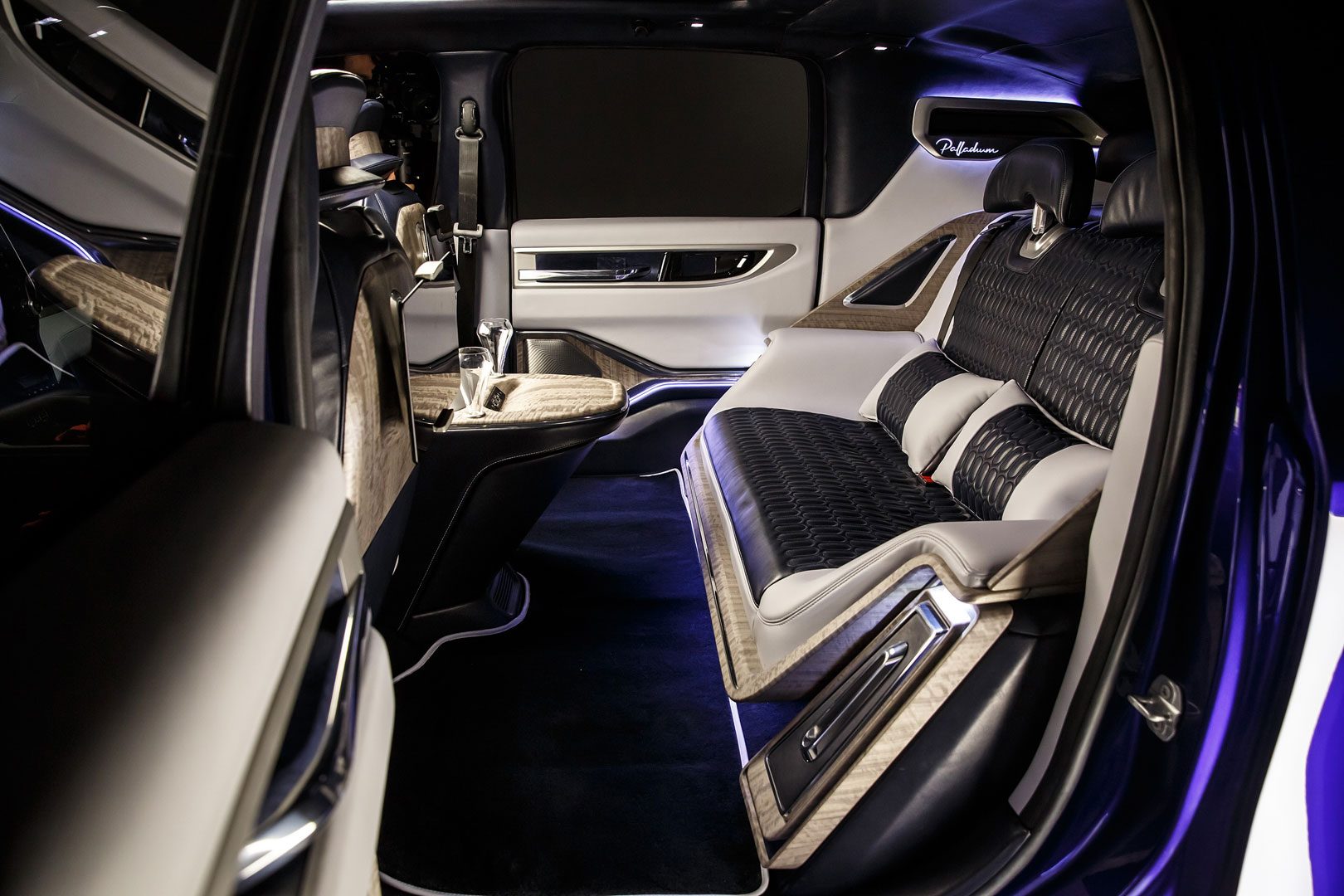 Much much better than the Atulux, which is the only car I've ever seen go to hell since the wall began again in 2019. At least this one makes an attempt to differentiate itself visually from its RAM origins. In profile it is still super easy to tell this thing began as a pickup truck, but at least there's actual styling here, whether or not you think it's good styling. Every bone in my body says this thing is uncool but I can't help but enjoy it for some reason. Maybe "Crazy luxury thing based on a truck" just does somethin' to me, see the Mohs in my avatar. I rated this a cool, quite the step up from the Atulux which may have been my least favorite car polled until I nominated the EcoSport.
Last edited: May 6, 2021

Something styled like this that runs green has the potential to sell massively to hipster *****. That would be cool, I think.

This looks like Toys'R'Us decided to put a 5.7L V8 in a child's sit'n'ride. Everything about it is just... just wrong. Ewww. No.

Super uncool, and this is from the guy who thought a riced-out Rio was meh. Does nothing for me.

No, I'm not feeling this one. Many of the body lines and styling cues are just off. Even the Rolls-Royce Cullinan is structured better than this. I am not an SUV hater; I just don't see any real appeal in this one. It isn't generic, and even if for the sake of being different, even a Toyota Prius has more appeal than this. So tab me for Uncool.

I know it's a Dodge Ram in an Italian pimp suit, but this looks super Russian. It's also weird that I can't find a picture of the engine anywhere since I'm curious what a bi-turbo Dodge Ram engine looks like. Seems like it would've been cheaper just to buy a crate Hellcat and stick it under the hood.

DIDN'T WE LEARN ANYTHING FROM THE LINCOLN BLACKWOOD? Seriously Uncool.

It is better than the Atulux, though still fairly ugly and tacky. The rear is especially bad and the front just looks like a Rolls Royce knockoff. It is certainly unique however, and being based on a Ram is a plus, so I give it a meh.

I can see the designers though process here. "What would a Bentley look like if it was based on a Dodge Ram and not a VW Phaeton....."

A huge improvement over the Atulux. Still absolutely ghastly though. SU, clearly.

CLowndes888
DIDN'T WE LEARN ANYTHING FROM THE LINCOLN BLACKWOOD? Seriously Uncool.
Click to expand...

I don't see the connection.

Both this and the Atulux are the same horrendous thing.
I prefer a Rolls-Royce or a Bentley. And I don't like any of those (exept the Bentley Mulliner Bacalar and only some Continentals).
You know what I'm going to vote.
K

What an abomination is that. 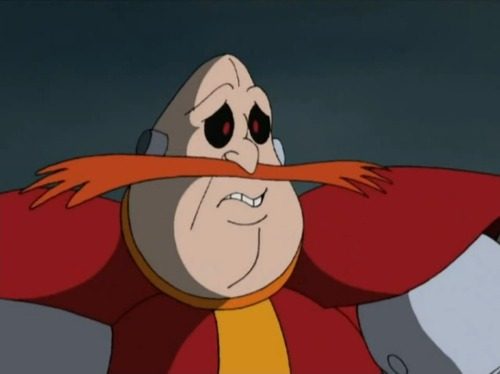 I normally hate it when people say "that looks like a car out of GTA", but... it really does look like someone designing "legally distinct" versions of cars for a video game just mashed up every big luxury vehicle they could find in a Google Images search.

SU, I don't feel I need to explain further.

It's as if some sort of AI just hashed together a response to "ocean liner but with motor vehicle parts" but then it also found an image of a codpiece.
Last edited: May 6, 2021

GranTurNismo
I don't see the connection.
Click to expand...

A "Luxury" truck without the capabilities of a truck.
Last edited: May 7, 2021

I keep reading it as "Amazon"

That thing is absolutely hideous !!
How and who is signing off designs like this, are they blind or something ??
If I ever saw anyone driving one of these I would point and laugh at them uncontrollably.

I need to find the person who decided a Rolls-Royce bodykit for a Ram was a good idea and have a few choice words with him.

Dear god. This thing makes the Atulux look like a Miura.

Everyone is comparing this Aznom Palladium to the Aznom Atulux; and just now, I saw the Cool Wall post on the Aznom Atulux. The Atalux looks more like a cross of a RAM and a 1st Gen Honda Ridgeline. This Palladium is like a RAM that thinks it's a Rolls-Royce. Both designs are atrocities and disgraces to RAM Trucks. If you ask me, though, I almost feel like doing "Uncool" to the Atalux (a very old Cool Wall post) and maybe changing my vote of the Palladium from "Uncool" to "Seriously Uncool." I voted "Uncool" previously to this Aznom Palladium.