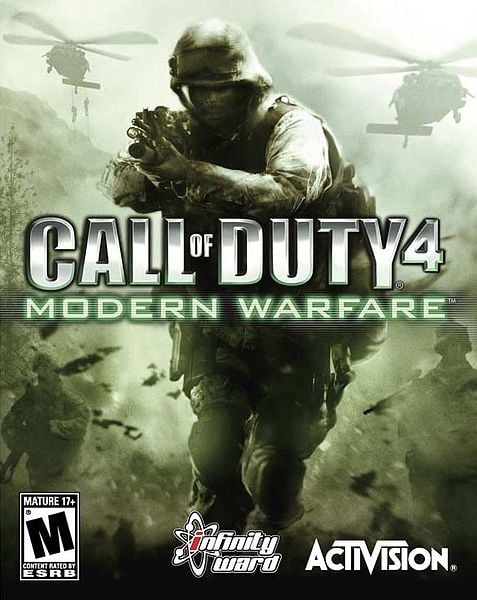 
Call of Duty 4 is the first game that brought the franchise out of World War II and into the modern era. Set in 2011, the game's story mode takes place in various locations such as the United Kingdom, the Middle East, Azerbaijan, Russia and Ukraine. Players take on the perspectives of military soldiers from the British SAS and United States Marine Corps to fight conflicts in the Middle East and in Russia.

A remastered version of Modern Warfare was released in 2016.

Arguably one of the most important titles of modern gaming, for better....or worse.

A fantastic shooter with a fun single player to boot. The best game in the MW era in my opinion.

This game taught me to check those corners.

This was the game that got me into online gaming and I gained a lot of friends from it too. It's a shame they ruined it with the remaster, but the original gets an A rating from me.

Like going to your old high school, you find that some things never change. Such was my experience playing MWR last year.

It's a fun game for the time, but I myself think the original Black Ops was the best COD.

I remember many years ago having this game on my old Xbox 360, before it fell victim to the Red Ring of Death (ironically with MW2 in the console). It was one of the first FPS games I ever played.

I don't remember much I did in this game, but now it seems like it was a revolutionary game for its time. Previously, all COD games plus other series had their games set in WWII or a similar era. Being set in the present day was nice change of pace for all FPS games, while it lasted. A fun (although short) single player campaign, and a great multiplayer with great maps, which set the standard for COD multiplayer for years to come.

Only drawbacks: Short campaign, and because it's a COD game, the multiplayer will still have your usual campers and no-scopers. This game also felt a little short on content (from what I can remember personally, at least).

Because of that, my final score is a B.

COD4 facts about me.

1. I finished the game in a very crappy laptop doing just 8-12fps.
2. I introduced it in our office and we played LAN instead of work.
3. This is the reason I got into online multiplayer. And Black Ops 2 for getting out.

6th Gen consoles didn't really handle FPS' well because they didn't have the graphical and computing grunt to do them justice. With the 7th Gen era they finally had the power and COD4 was one of the first to take the genre to a whole other level. I hadn't really played a fully functional FPS till this game and it was a very satisfying experience. Aside from the technicals it also had a good story, characters and voice acting to make you really invested in the story.

One of the games that kicked off my interest in FPS games. A.

It's funny, my original 60 GB PS3 bit the bullet with COD 4 in the system.