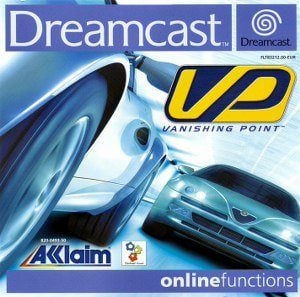 
Vanishing Point, not to be confused with the 1971 film or its 1997 remake, is a racing game that forgoes the traditional grid-start, first one to the finish wins sort of race. In essence, every race is a time attack where you begin with a rolling start and a time to beat. You have the clock and a large amount of traffic to contend against, a handful of them driving aggressively (your competitors). This racing game has the distinction of using several vehicles not typically seen in a racing game several of which are made by Ford. One of the two vehicles available from the start is a 1997 Ford Explorer, with a 1994 Ford Ranger being unlocked early in the game. Other unlockables include a 1994 Ford Taurus, a 1992 Lincoln Town Car, a 1997 Ford Windstar and 1996 Mercury Sable Wagon, amidst the more conventional racing game vehicles such as the 1967 Shelby Cobra, the 1996 Dodge Viper GTS, 1998 TVR Cerbera, and 1993 Toyota Supra to name a few. A "Stunt" mode was also available where there were a series of challenges in which you had to complete in a certain amount of time, much like license tests.

Gonna tell everyone straight up: This is NOT a good game.

Every car drives like a Lincoln Town Car with bad shocks, from the Dodge Viper GTS to the actual Lincoln Town Car in the game. In the beginning, the only two cars you're allowed to drive are either the Ford Explorer or the Ford Mustang convertible, which after you beat either of their first championships will net you a BMW 328i or a Ford Ranger. There are other "competitors" with you on the track, but since your only enemy is the big time they give you at the beginning of the race that you need to complete the 2 or 3 laps under in order to win, they're just highly aggressive traffic cars that will lose control and screw you over if they get in the way. Particularly nasty wrecks, if they make you spin fast enough will make your car flip out and tumble all over the place in a fairly unrealistic manner. This can happen with any happenstance awkward landings that you can't really control too.

On the stunt mode, you're given a time limit to reach a goal area or pop a certain number of balloons in a time limit, in a specially designed stunt driving arena. Slight awkward glances with the geometry of the road can send your car into the wall or into the instant-fail zones in an instant. One particularly frustrating one is the corkscrew jump, where you're supposed to drive down the ramp, hang a 180 at a distance you think is suitable to make the jump, and then go off the ramp, most likely getting your car to tumble in a way that either:

With all of that said, I find the wonky physics and odd vehicle selection somewhat interesting and fun to try and overcome. Sort of like a self-imposed challenge, and I have beaten the whole game. (I have the save to prove it too.) It's a guilty pleasure for me, and that's what saves it from being an F.

Otherwise, I'd totally give this an F.

I always forget about this game, but I remember it being the only game to feature a Mercury Sable station wagon.

I enjoyed it on PlayStation, despite it being pretty rubbish. Back in 2001, seeing ordinary cars in games was a massive novelty.

I didn't buy it again for DC, but I wish I had now.