WASHINGTON (AP)  An unusual nasty mix of a hurricane and a winter storm that forecasters are now calling "Frankenstorm" is likely to blast most of the East Coast next week, focusing the worst of its weather mayhem around New York City and New Jersey.

Government forecasters on Thursday upped the odds of a major weather mess, now saying there's a 90 percent chance that the East will get steady gale-force winds, heavy rain, flooding and maybe snow starting Sunday and stretching past Halloween on Wednesday.

Meteorologists say it is likely to cause $1 billion in damage.

The storm is a combination of Hurricane Sandy, now in the Caribbean, an early winter storm in the West, and a blast of arctic air from the North. They're predicted to collide and park over the country's most populous coastal corridor and reach as far inland as Ohio.

The hurricane part of the storm is likely to come ashore somewhere in New Jersey on Tuesday morning, said National Oceanic and Atmospheric Administration forecaster Jim Cisco. But this is a storm that will affect a far wider area, so people all along the East have to be wary, Cisco said.

Coastal areas from Florida to Maine will feel some effects, mostly from the hurricane part, he said, and the other parts of the storm will reach inland from North Carolina northward.

Once the hurricane part of the storm hits, "it will get broader. It won't be as intense, but its effects will be spread over a very large area," the National Hurricane Center's chief hurricane specialist, James Franklin, said Thursday.

One of the more messy aspects of the expected storm is that it just won't leave. The worst of it should peak early Tuesday, but it will stretch into midweek, forecasters say. Weather may start clearing in the mid-Atlantic the day after Halloween and Nov. 2 in the Northeast, Cisco said.

With every hour, meteorologists are getting more confident that this storm is going to be bad and they're able to focus their forecasts more.


The New York area could see around 5 inches of rain during the storm, while there could be snow southwest of where it comes inland, Cisco said. That could mean snow in eastern Ohio, southwestern Pennsylvania, western Virginia, and the Shenandoah Mountains, he said.

Both private and federal meteorologists are calling this a storm that will likely go down in the history books.

"We don't have many modern precedents for what the models are suggesting," Cisco said.

It is likely to hit during a full moon when tides are near their highest, increasing coastal flooding potential, NOAA forecasts warn. And with some trees still leafy and the potential for snow, power outages could last to Election Day, some meteorologists fear.

Some have compared it to the so-called Perfect Storm that struck off the coast of New England in 1991, but Cisco said that one didn't hit as populated an area and is not comparable to what the East Coast may be facing. Nor is it like last year's Halloween storm, which was merely an early snowstorm in the Northeast.

"The Perfect Storm only did $200 million of damage and I'm thinking a billion," said Jeff Masters, meteorology director of the private service Weather Underground. "Yeah, it will be worse."

But this is several days in advance, when weather forecasts are usually far less accurate. The National Hurricane Center only predicts five days in advance, and each long-range forecast moves Sandy's track closer to the coast early next week. The latest has the storm just off central New Jersey's shore at 8 a.m. on Tuesday.

As forecasts became more focused Thursday, the chance of the storm bypassing much of the coast and coming ashore in Maine faded, Cisco said.

The hurricane center's Franklin called it "a big mess for an awful lot of people in the early part of next week."

Here is the current projected path:

This could be a nightmare for anyone in the NYC area. I hope to keep the latest tracking map here.
Last edited: Oct 30, 2012

Going to be nasty! 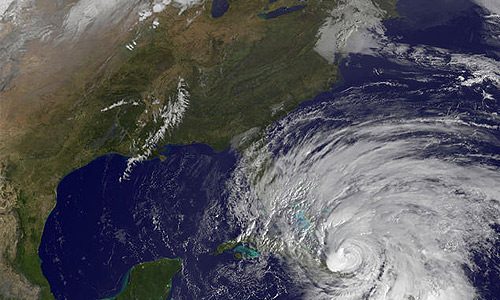 Snow? This is not gonna be fun.

Hopefully this doesn't damage those of you on the East Coast too severely.

That's just one of my names.

Snow and cold weather... just what I need. I rarely wear a shirt indoors, even in the Winter.

Hmm, I guess I don't need to update it because the link automatically updates with each advisory. Track though is improving (from my standpoint) as its going further south than previously expected but its still 3-4 days from the event.

Didn't it just hit Cuba? So wouldn't it be blasting over Florida by now?

Dennisch
Didn't it just hit Cuba? So wouldn't it be blasting over Florida by now?
Click to expand...

No, because Cuba extends to the southeast of Florida. It hit the Eastern portion of Cuba and went right over the Bahamas. This storm won't make direct landfall until it hits somewhere between North Carolina's Cape Hattaras and New York's Montauk Point.

i hope it wont hit Florida my package is there

Did you and your package get separated, Starchaser? That's not good news, either.

Thanks for the heads-up, Blitz . . .yes, this is going to be a nasty one, too. NYC is already sand-bagging and preparing for bad flooding. The worst we are going to get here in Toronto is some snow. Early, though - but not enough to worry us. Not a hurricane yet, but obviously going to get there. Whether it does become the 'Perfect Storm' remains to be seen - but predicting the weather is much like foretelling reality. Chaos breed chaos till order is nothing but everything mish-mashed.
We'll prepare for the worst but hope for the best, as usual.

And then there is the 'political' side of this storm. National emergencies take precedence over campaigns.

It's still a wintery storm then?

Signal52
It's still a wintery storm then?
Click to expand...

Its two parts. In the Appalachians the storm will be a snowstorm (also in the Ohio River Valley). Closer to the coast it will be hurricane conditions.

We're going to have fun here in PGH. We'll either get loads of rain or a few inches of snow, along with the potential for tropical storm force winds, not that they're likely. Philly and D.C are going to get hit really hard, as in NJ. Good luck, Blitz.

Maryland is right in the middle of the projected path

First the derecho in June and now this?

I wonder if this means George Clooney and Marky Mark get to drive a boat up a giant wall of water this time as well?

I'm not exactly thrilled the path is aimed right at Michigan either, looks like we will get clipped after it makes landfall.

I'm in Philadelphia, and we're all praying for snow

I'm in New York...its supposed to combine with an arctic front...

It looks like i will be hit directly. I live in South Central Pennsylvania and it dosen't look good lol

I'm in central Pennsylvania and we're gonna get a direct hit as well.

I live 15 minutes east of DC, and we're gonna get some of it

LancerEvo7
I'm in central Pennsylvania and we're gonna get a direct hit as well.
Click to expand...

Yeah looks like Philly will be nailed, but anything after that is unknown.

I to am in central PA. I'm really hoping we don't lose power here. But if we do, then I'll probably get out of school for a day or two. So I guess that's a plus.

ilikewaffles11
I to am in central PA. I'm really hoping we don't lose power here. But if we do, then I'll probably get out of school for a day or two. So I guess that's a plus.
Click to expand...

Yeah but if the power goes out *knock on wood* and we dont have school... What will we do all day?!?!

Sled ride. We have plenty of hills.

Well, I've been through about ten of these in my lifetime, so here goes:

You're going to get a lot of rain and windy conditions; stay indoors and don't be a fool, if the hurricane/tropical storm is in your path. Take in anything that might fly around on a windy day, or tie it down. If you live in a flood-prone area, be prepared for post-storm runoff, which is what occurred with Irene, Isaac, and Floyd.

Get a 2-3 days of shelf-stable foods, extra batteries, and keep your flashlights and lanterns ready. A flashlight doesn't help much if you have it in the garage at 3am with no power available...keep one by your bed and one by the front door. A cheap little battery-powered AM/FM radio helps you stay informed when the power is out.

If you have an old un-powered telephone, plug it into the jack when you get a chance; pick one up for $10 at the store. Many people with landline service forget that their cordless phones are worthless in a blackout. Even if you don't have landline service, it's still good for a 911 emergency, so as long as the lines stay up.

Bottled water is nice to have as a precaution, if your area has a boil-water order after the storm. You could also use your pitchers, pots, et cetera and fill them with tap water in the meanwhile. Or just clean our your tub very carefully, and fill it up.

On the other hand, the media makes a hurricane/tropical storm seem like a table saw blade is going to destroy everything in a 500-mile-wide path; it's not as destructive at all once it makes continuous landfall. The folks by the ocean get the full force of it all, but being 100 miles inland (or more), not as bad.

Will you have to board up your windows? If the winds are continuously over 75mph, I would say so. Otherwise, unless you're always getting hit with debris, probably not. Meteorologists measure storm "strength" usually by a lot of factors, but news media tends to rate the hurricane/tropical storm by the peak or highest winds measured; your mileage may vary, so to speak. The people out in the ocean or flying over a hurricane might measure 100+ mph winds, but it's less than that on dry land. Still, driving or being a hoon isn't recommended.

The other thing that tropical activity causes are these "feeder bands" when whip storm after storm upon you for at least a day or two. You think you're clear, but an hour later, it's stormy again. On the outer edges, they're annoyances, but nothing remotely catastrophic; those in the eye of the storm just get continuous storms.

We usually start to do that in the winter up here anyways^^^just because we've been known to randomly get 4 feet of snow at any given moment.

I'm living 4 miles from the shore in central New Jersey.
This is going to be interesting. I'm going to get hit head on.

gamerdog6482
I'm living 4 miles from the shore in central New Jersey.
This is going to be interesting. I'm going to get hit head on.
Click to expand...

Yeah my uncle lives outside of Newark. I was there when the last one hit a few years ago. Was pretty nasty.

I'm the farthest away, near Buffalo in NY. I don't think we will get it all that bad, if we get anything, I fear it will be a lot of snow from the arctic front that's merging with it right over us.
Share:
Reddit Pinterest Tumblr WhatsApp Email Share Link