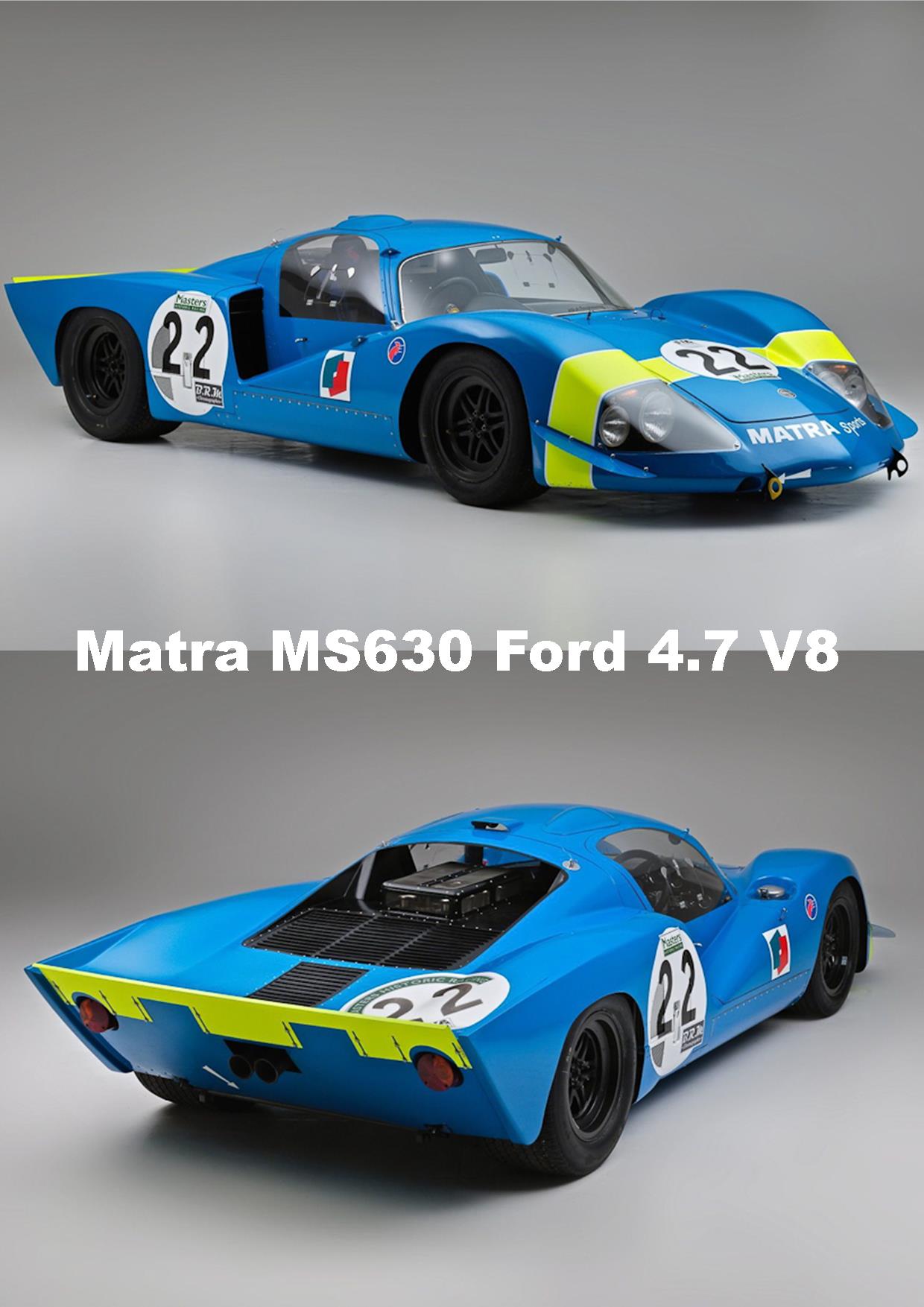 The Matra MS630 was a mid-engine sports car with a tubular spaceframe powered initially by an F1 derived BRM V8 of 2.0 litres capacity and later by the Matra 3.0 V12.

The French President had commented publicly that it was a shame that French engines were not being used in motorsport and a grant was offered for the construction of a 3 litre engine suitable for F1. This was accepted by Matra who commenced development of a 3 litre V12. When the rules for Sports Cars were changed for the 1968 season limiting them to 3 litres capacity or 5 litres if 50 examples had been made, the door was opened for running endurance tuned F1 motors in sports cars.

The MS630 was fitted with the new Matra V12 and entered in the 1968 le Mans 24 hour race where in the hands of Henri Pescarolo and Johnny Servoz-Gavin it ran as high as second place before retiring after 283 laps following a fire in the pits.

In late 1967 the V12 engine programme was behind schedule so the MS630 was tested fitted with the aluminium alloy Ford 4.7 litre V8 from a Ford GT40 producing 385bhp. The Ford powered car was used extensively by Johnny Servoz-Gavin in minor sports car races in 1968 such as the Coupes USA on 28th April, Magny Cours 1st May, Dijon 5th May, GP de Paris Montlhery 12th May and Magny Cours 14th July - he was first in all these events!

Four MS630 chassis were built of which one was destroyed in an accident, one was kept by Matra and two are in collections. These photos are of a fifth car which was built in 2007 to the original specifications and with the approval of Matra - I am suggesting that this car be used as a model to create a copy of Servoz-Gavins car - the reason being that like many racing cars the original does not exist in its 1968 form - I believe that Servoz-Gavin drove chassis M630-02 and in 1969 this was rebuilt into a V12 MS650.

With 385bhp pushing only 820kg it was a very rapid car. On the original website it states that the car was nearly second in the 1968 Le mans race, however that car was powered by the Matra 3.0 V12 and not the Ford 4.7 V8)

I have suggested this car because it would be a great rival in the game for the other 1960's Le Mans Prototypes. (Note - please also support the V12 powered Matra's which have already been suggested - MS650, 660 and 670 as these are probably the best sounding cars on the planet!) 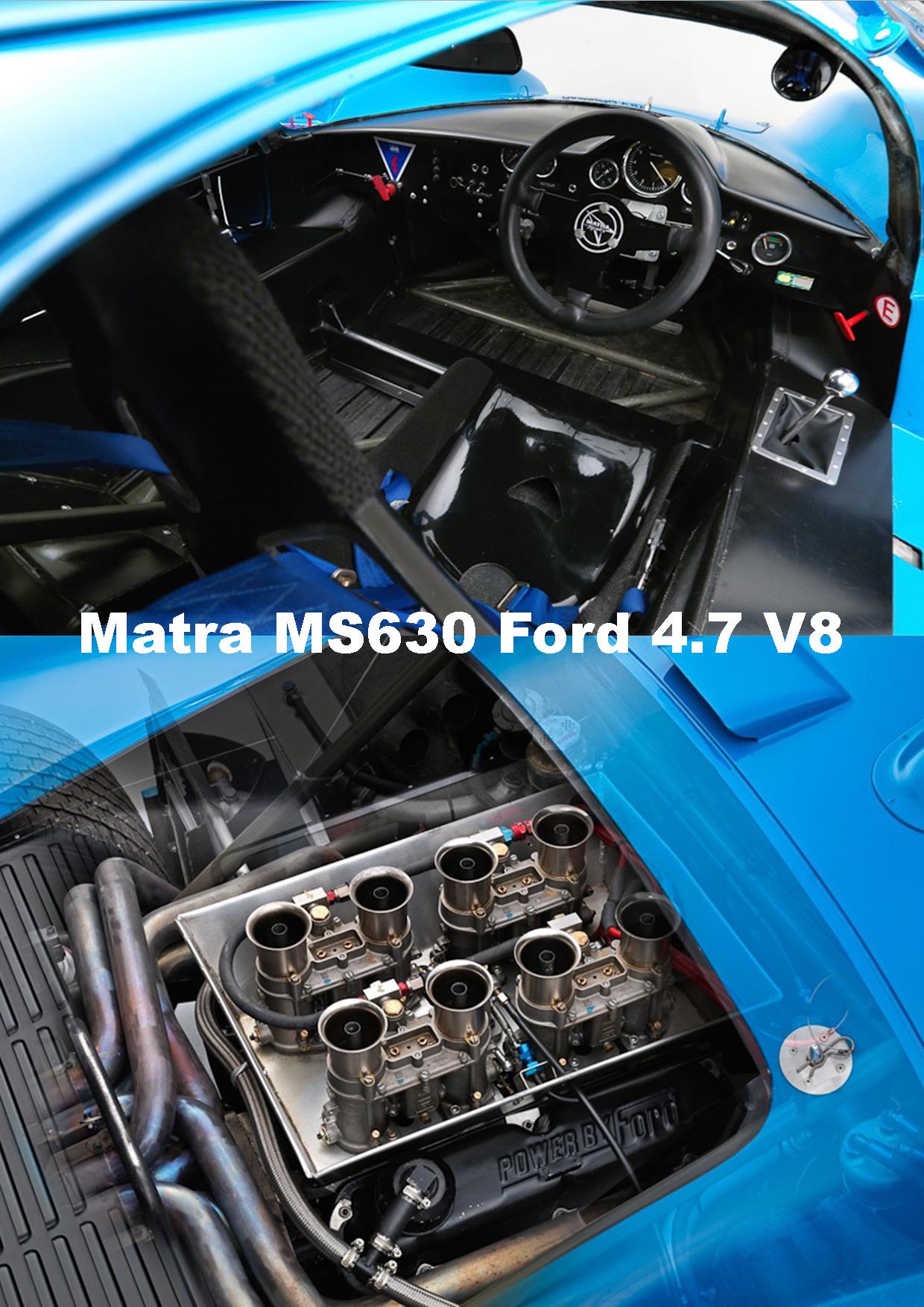 ............Interesting history. Not sure whether the year is correct or not, but its interesting story alone should ensure its place in GT car list!

If you're suggesting this particular car, it's build year is 2007.

Oops, the car (photos in the OP) is indeed built in 2007 like GTPorsche says.

But I assume that the OP liked this photos more than the original which was built in 1967.

Yes, this car would be a good addition to the GT series.

StarLight
Oops, the car (photos in the OP) is indeed built in 2007 like GTPorsche says.

But I assume that the OP liked this photos more than the original which was built in 1967.

Yes, this car would be a good addition to the GT series.

Yes - I was aware that the car in the photos was built in 2007, however I have done more research and found that the original Ford powered car no longer exists as the chassis was used in 1969 to create a V12 MS650 Spider. The original Ford V8 powered car was built in 1967 and used extensively in 1968 by Johnny Servoz-Gavin to win a series of minor sports car races which did not have a Le Mans style 3 litre limit including the Coupes USA, Magny Cours, Dijon and the GP de Paris Monthery. The replica car in the OP could be used to create Johnny Servoz-Gavins original 1967-1968 car.

Below - the only picture I have been able to find of the original Ford powered car (the V12 cars had an extended tail section). 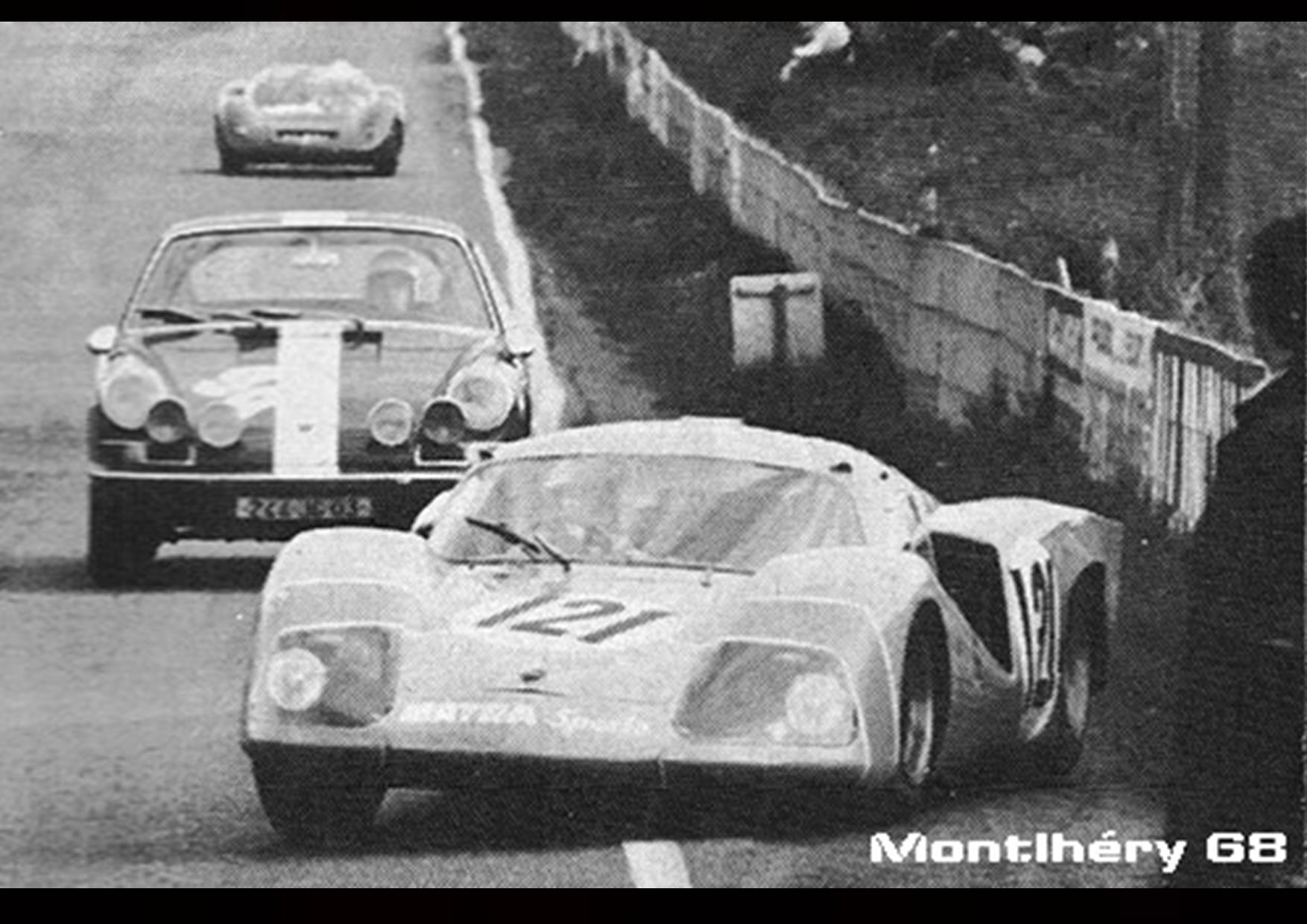