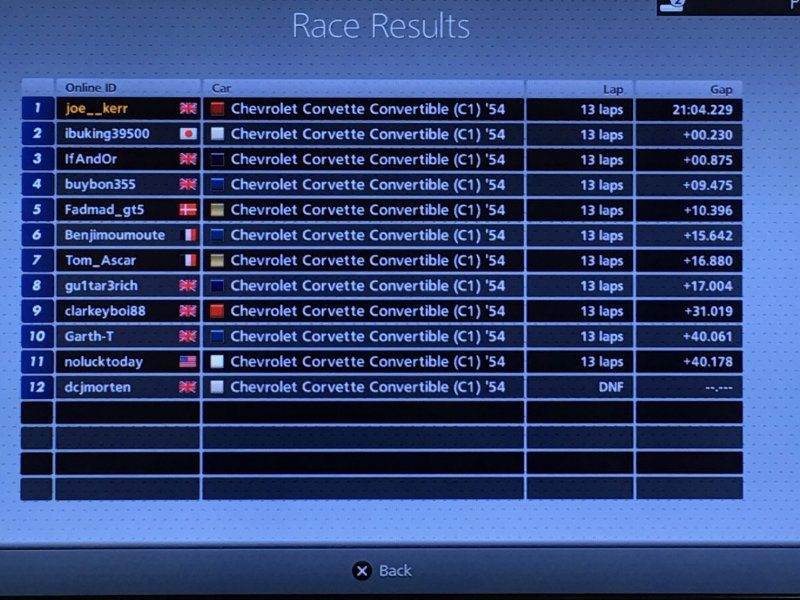 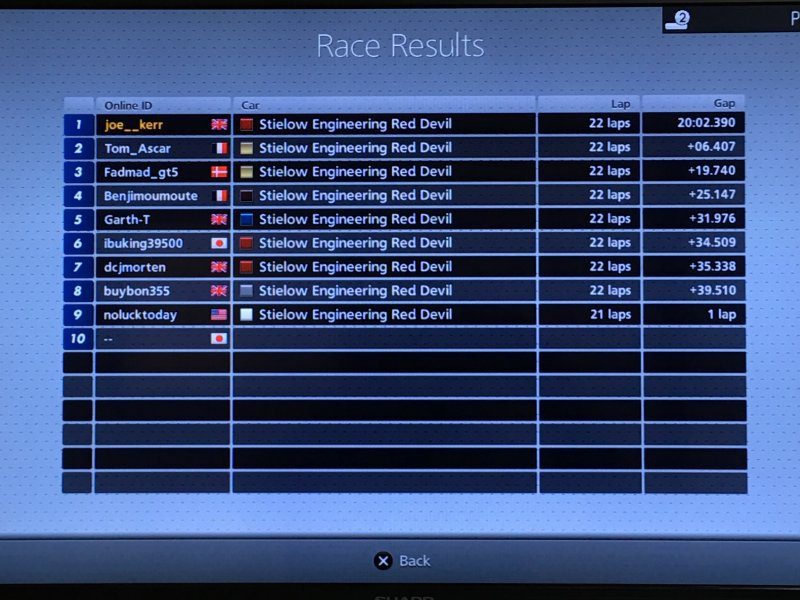 Phew, R1, from the lights to the flag, I was a busy busy! I couldn't even so much as blink with Ibu-san so close behind. Does he not realise how old I am! Someone needs to tell him. The GT series has a number of talented drivers and Ibu san looks like one to keep an eye on for the future. And Paul! A magical drive to keep 'er lit all the way to the line finishing only 0.8 behind in 3rd. Where did that pace come from Mr? And, as usual, great tyre management. My engineers are checking my C1 just now as I'm pretty sure I wrung its neck...

Most of the places I gained in R2 were just through others running wide and all I had to do was keep my line. Often when one car ran wide, two or three followed, so the gaps were there, I didn't need to work for them. So, again, my win was more by luck than design. Great fun though. Unlucky to richy for the spin, and I think someone else spun too(?). I won't blether on about the races - you were all there - however, I did decide to make two videos this time, the second one to highlight my easy passage through the pack. Very kind of you lads to run wide for me

Good to have Clarkey and Benji join us too. (Clarkey, I'll pm you.) Suts, I know you think the Red Devil is an unnecessary evil, but you'd have loved it.

Well, that's us all done with the US Classics Series and it's now over to the naughty cars to see what we can do with them.
I promised a long time ago that the Madness Series would end, and I apologize that it's taken me this long to get to it. See, here's the deal: I have a passion to race. I like to race in large groups, which requires people... which means the weather has to be awful outside because then you'd all be at home having not decided to go to the pub. So, one more series to go guys, your series, running your car/track combos, then I'll turn you over to your wives and mistresses.
I'll potter along at the back because it would be ridiculous to think that winning a race in Power Through the Noughties" is on the cards for me. Time for others to enjoy the podium places for a change, I've had my fun. (BTW, using the power limiter is not an exact science and we may be way out at some tracks and on the money at others, but either way, I'm looking forward to some great battles throughout.)

A special thanks to all for staying up so late to participate, and to Ibu-san for getting up so early! Congrats to Colin on his 2nd place in the 'ship and fad in 3rd! Team TJ wins the team event with the Bandits in second and Ecosse in third. Have a wee half for me Tooma, my great team-mate! And then have another

As usual, apologies if you're not featured in the videos, I'm trying to follow the action.

reefer
Suts, I know you think the Red Devil is an unnecessary evil, but you'd have loved it.
Click to expand...

I'm really sorry I couldn't atttend. It wasn't just because of the Red Devil. It is a car I've found I actually have to tune to drive whereas it's a handful stock.

I was at a charity ball which I had to go to via work.

Looks like you had a great turnout and a fantastic finish to the US stock series.

Thank you Joe for your hard work at running the "Madness" events. It's a brilliant mixture of good hard racing, sportsmanship and funny banter. It makes me still want to play GT6...although I don't have any other games or a PS4 yet!!

See you Joe and all in the Noughties.

Those great videos you make always inflight my Monday at work

Now I know I didn't attend many of the races (ok hardly any) but I enjoyed the ones I was involved in. So thanks go to Joe for running the show. I know it takes a lot of time & effort creating/organising the thread and not least sorting out the car & track combos. So -

It was, of course, good having the occasional race with you guys. And hopefully I'll make an appearance here and there in the naughties!

reefer
Where did that pace come from Mr?
Click to expand...

I might have been a bit closer to you two front runners throughout but early on I was having trouble with my race manager, she kept interrupting me! That's why in the end I unfortunately missed the Devil race.


reefer
...it would be ridiculous to think that winning a race in Power Through the Noughties is on the cards for me
Click to expand...

You're not fooling anyone there.

Sutsagrd
I was at a charity ball
Click to expand...