Songs you're tired of hearingMusic

Whether it be a good song or a bad song, I am sure we all undoubtedly have had a few that we hear too often in various places and wish we didn't have to hear them as much as we do. Well, this is the thread to post about them!

Surprised nobody has made a thread like this already. 🤔

Whiskey Glasses by Morgan Wallen.
This song has been out for about 3 years now and while some songs from back then don't get heard much anymore, theirs something about this one that radio stations just absolutely love about it, and I never really understood it. Despite the song being a few years old, you would think it just became a hit with how often they played it. Ever since it came out, it's been played to death on the radio, and prior to him saying that racial slur, I think I heard it every hour, sometimes more than once. While I hate all that drama with him saying that racial slur is even a thing, I will admit, I was actually glad they took his music off the radio since it meant I wouldn't have to hear this a million times a day anymore. However, his music is starting to creep back up onto the radio again and while I don't hear this as much as I used to, they're still playing it rather frequently anyways.

Now I don't dislike Morgan Wallen, I don't dislike this song, and I couldn't care much less what he does outside of his music, but I have gotten so tired of hearing this song so dang much and I really wish radio stations would just give it a rest already. In my opinion, the song may not be terrible, but it's not very remarkable either and it certainly isn't his best, yet it's one of the most overplayed.

This! The young dudes play this at least once a day, every day of the work week. Geez. 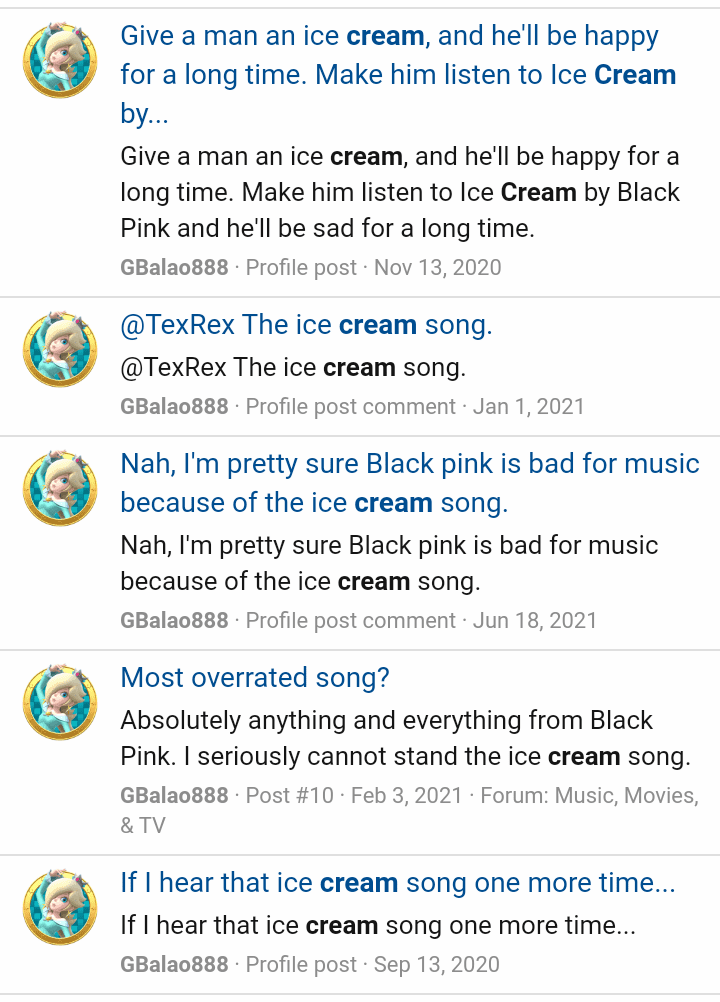 Just can't stop talking about how horrible that song is.

Maybe we need a thread for songs you're tired of hearing about.

Just the Way by Parmalee and Blanco Brown
Used to like this song a lot and while I don't dislike it now, it's a lot like the aforementioned "Whiskey Glasses" and arguably even worse. Despite it being over a year old now, I still cannot go for a ride with my family without hearing it at least once and I swear every country station plays it like every other hour. I get it's a good song, but my local radio stations have overplayed it to the point I don't really enjoy listening to it anymore and much like "Whiskey Glasses", they really need to give this one a rest as well.
Last edited: Aug 23, 2021

Oasis - Don't Look Back In Anger.

I don't even use Tik Tok or Instagram, but my family does and I hear this song a lot, most notably in cat-related videos. I really am not a fan of hearing vocals pitched this high and I certainly don't fancy hearing them constantly. Why they use this one so much, I don't even know, but I really wish they'd pick something else already.

Mostly hear this from the Applebees commericial but now I'm hearing it blasted from squated trucks...

V
Which Song(s) Makes You Nostalgic