Belarus vs Eurovision has become a bit of a problem in the past few days.

https://en.wikipedia.org/wiki/Belarus_in_the_Eurovision_Song_Contest_2021
Belarus had a decent list of songs which were up for selection for their entry to the 2021 Contest, which must have been publicly available due to the number of "rankings" I had seen of them over the past few months. Everything began to unravel quietly when their selected artist for 2020 - VAL - was barred for competing this year in September of last year for showing support for the opposition leaders in last year's election in Belarus, "won" by Lukashenko (again).

Subsequently, Belarus has had a lot of Protests who all claim that Lukashenko's 80% winning margin was completely made up, and want the President since Belarus' Independence in 1991 deposed. It doesn't help that the leaders of the opposition party were all arrested or forced into exile.


How does that tie into Eurovision? Well, a few days ago, Belarus' Internally Selected song was announced, as the band Galasy ZMesta were chosen with their song "Ya nauchu tebya (I'll Teach You)". This low-effort folk song was pretty dreary and nothing special, but that was until everyone who understood Russian began to translate the lyrics.

Code:
Basically, this entire song was a veiled message from Lukashenko laughing at the Protestors efforts at deposing him. The band were then shown through a back catalogue to be Homophobic, Transphobic and a load of other issues which went completely against Eurovision's values of inclusion and acceptance of all cultures and peoples. The contest isn't unofficially nicknamed the "Gay Olympics" for nothing - just watching one contest can confirm that title to you.

As you can guess, this song was met by with an outcry of hate from fans from all over Europe and Belorussians too, especially the people the song was laughing at. The song quickly racked up a significant Dislike ratio on the official Eurovision Youtube channel and a mass of calls from fans and media calling for the song to be investigated and banned for breaking what is basically rule #1 of the show: No Political Messages in songs.

The Ukrainian Eurovision twitter page quickly reacted to the song with the Tweet shown below, and Sweden have since removed the Belorussian judges from the panel to decide the winners of Melodifestivalen this weekend - their massive Internal Selection contest.

The EBU announced this afternoon that the new song was ineligible, giving the following statement. 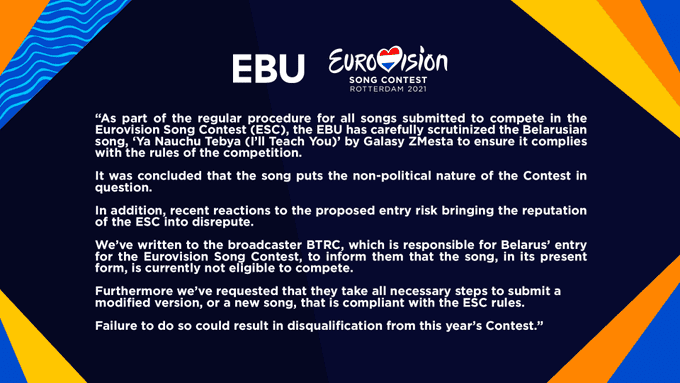 This of course has been met with cautious happiness from everyone. Happiness that the horrible song is not going to appear at the show, but it does worry quite a few people that this whole thing might be playing into Lukashenko's hands. Of course, when you're trying to be an evil Dictator, the best thing to do to control the population is to say "The rest of the world hates us and you, listen to me and I'll keep you safe". The fears now are the withdrawal of Belarus from the contest, and then to stop the broadcast the show at all, thus allowing further censorship of outside influences. The alternative of letting the song stay, but rot into last place in the Semi-Finals was an attractive proposition for some people to publicly send a message to the Government. Basically, the people of Europe vs Lukashenko's ideals.

Instead, it's now the EBU vs Belarus. The EBU have blinked first (following their example of an anti-Putin song by Georgia for the 2009 contest held in Moscow), and it's going to be a nervy few days while Eurovision fans and the Belorussian people wait for a response.

Does geopolitics consist of choosing between the disastrous and the unpalatable?