The World Cup of TV Cars

Another legend we can't leave out, m'lady... 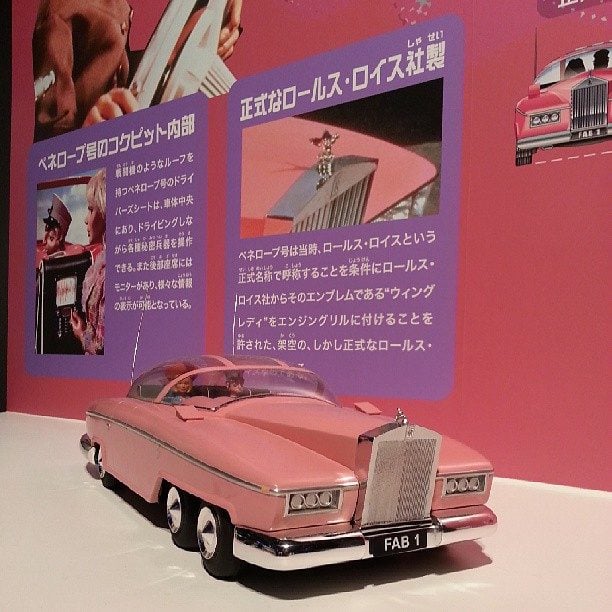 Oh yes, a big part of my childhood!

I don't believe Shirley Jones had a bus licence to drive it. 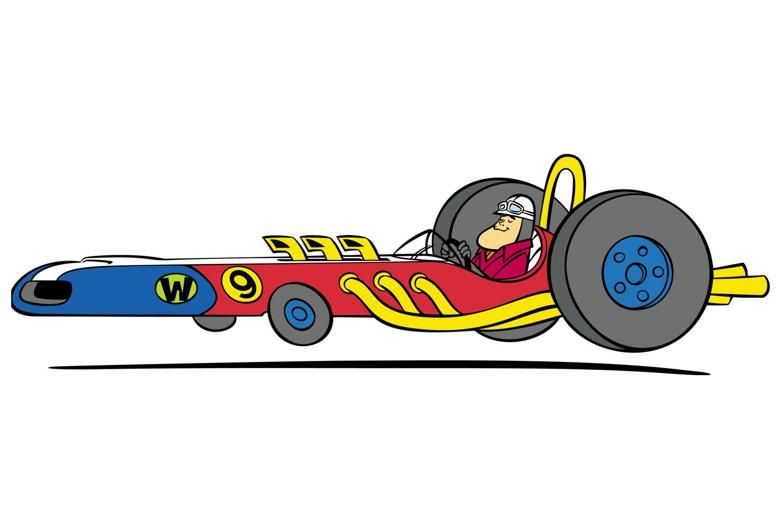 VulcanSpirit
Another legend we can't leave out, m'lady...

I was wondering how long that was going to take. Nearly had to nominate it myself... 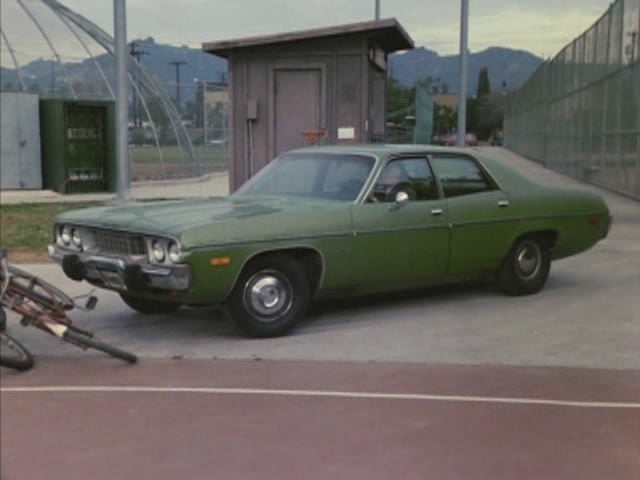 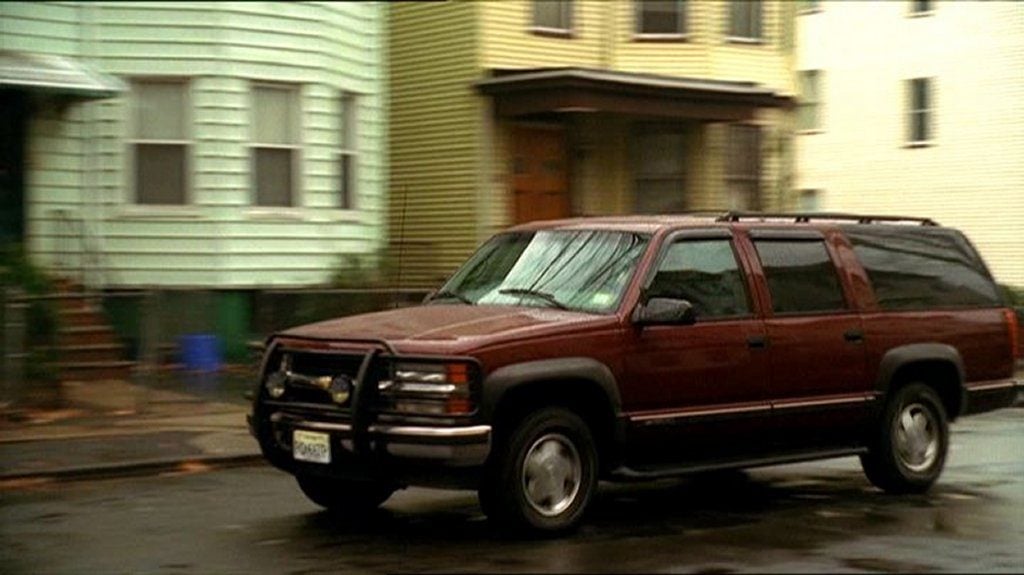 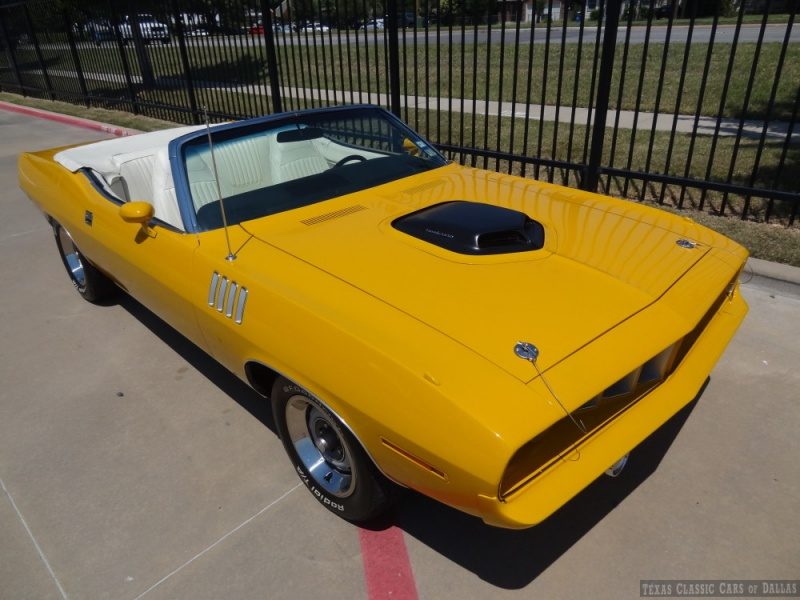 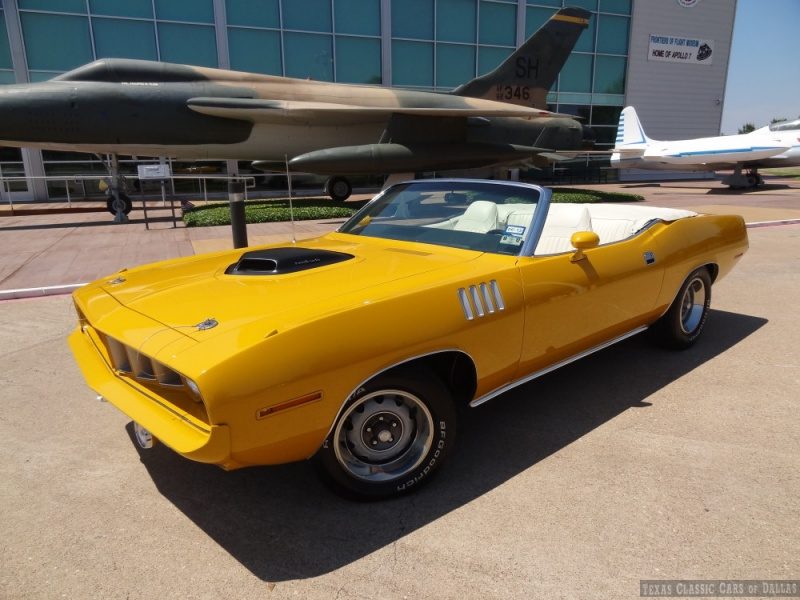 Two more from The Dukes of Hazzard 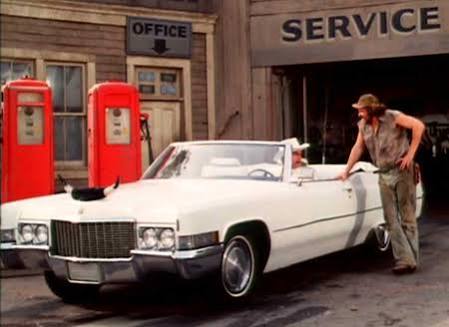 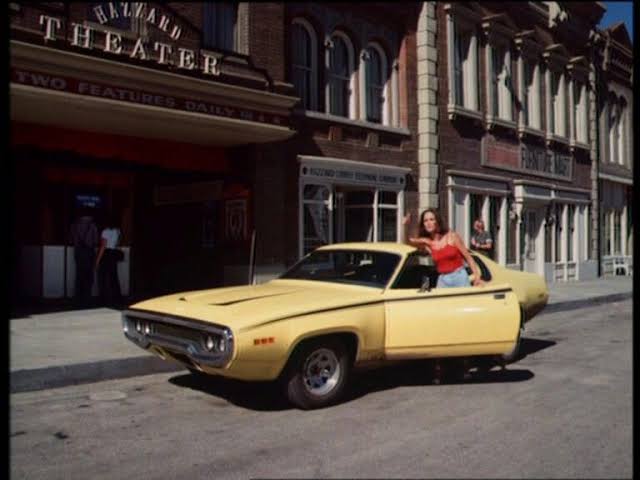 1954 Dodge Town Panel, Chico and the Man, NBC, 1974-1978, three stars on IMCDB.org. It may not have ever moved, but it was important to the story and a major element to a hugely successful show. 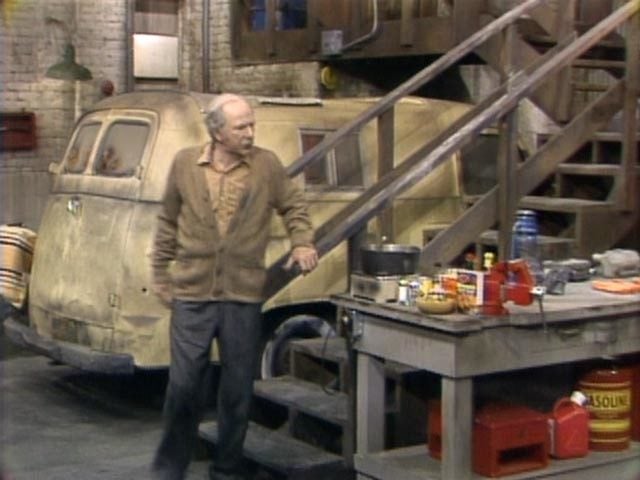 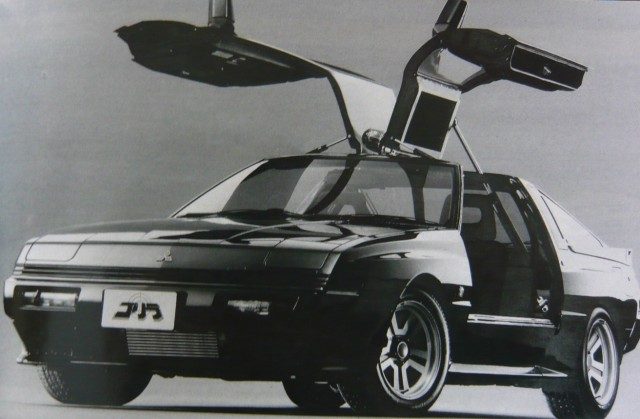 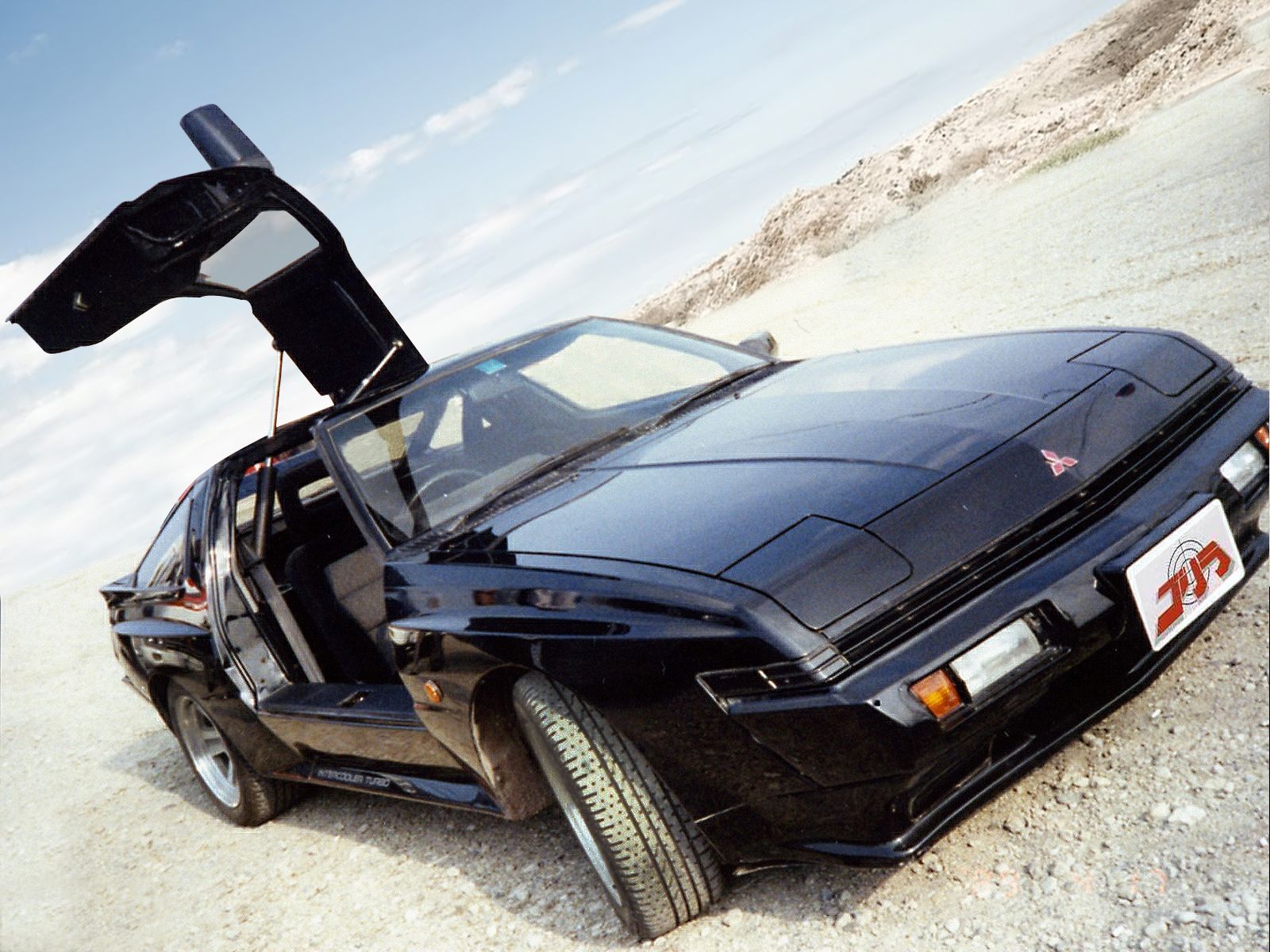 Drop the headlights, drop the doors...

After a week of nominations, we've come up with a 65-car "short" list of the greatest ever TV cars. Now it's time to vote.

You can pick up to ten cars from the list above to create what GTPlanet thinks are the 32 greatest ever TV cars - we're essentially going to cut the list by half. That'll then create a seeded list for a tournament we'll conduct on our social media: The World Cup of TV Cars.

Not every car nominated made the list. It turns out that there are a lot of very significant vehicles in TV shows, and we had to draw the line slightly higher as a result. Nonetheless, we've probably got close to a definitive list of the greatest TV cars, with quite a lot of animated entries at that, and whatever eventually wins will likely be very worthy of the title.

You've got a week to get your votes in... so get on with it!

At the moment, the top seeds - which will be kept apart in the eight groups - are:

34 cars have 0-2 votes, and they're on the chopping block - which includes Penelope Pitstop's Compact Pussycat, the VW van from Lost, and the original Reasonably Priced Car. That'll make my life interesting when it comes to deciding which one survives to go to the finals...

I've just run a practice draw on the current leaderboard to see how the seedings and randomiser works. This was the result: 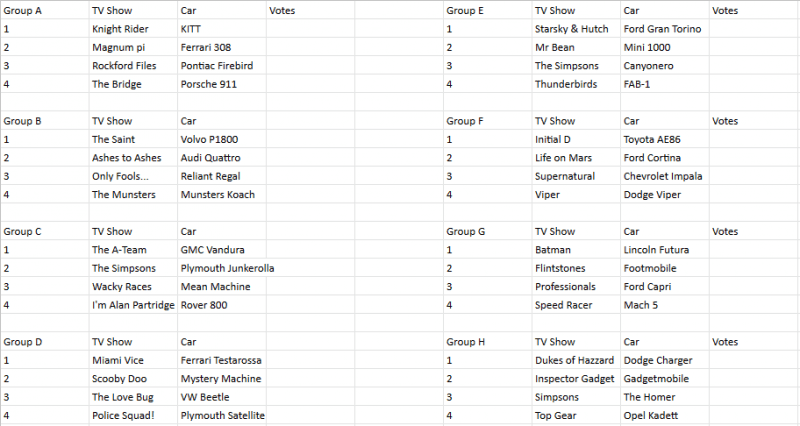 Those are some mad, mad groups.

I'm really surprised with Group G having the Mach 5 down the order. Sure, young/younger voters than me, may only have the movie for reference. Still, it should but up the top. But, the voting doesn't lie...

05XR8
I'm really surprised with Group G having the Mach 5 down the order. Sure, young/younger voters than me, may only have the movie for reference. Still, it should but up the top. But, the voting doesn't lie...
Click to expand...

That's just the draw (and a practice draw) for the groups before they go to the public voting. The Mach 5 was a fourth seed at the time I did the trial run, so slots into position four of whatever group it's drawn into.

As the voting still has another four days to run, there'll be changes. It looks like the Mach 5 would be a third seed right now, and I'm not doing the real draw until Monday. I'll also set the schedule for the knockout stages on Monday too - so it'll establish who the winners will face at each subsequent stage - before I do the draw.

Yes it's too late but with times being as they are this should have been added: 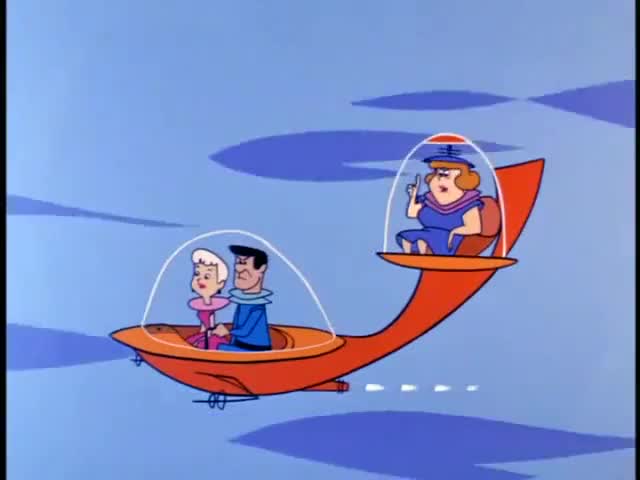 opelgt1969
Yes it's too late but with times being as they are this should have been added:

It was on the longlist, but didn't make the shortlist.

Famine
It was on the longlist, but didn't make the shortlist.
Click to expand...

This is the one on the long list it isn't the mother-in-law car: 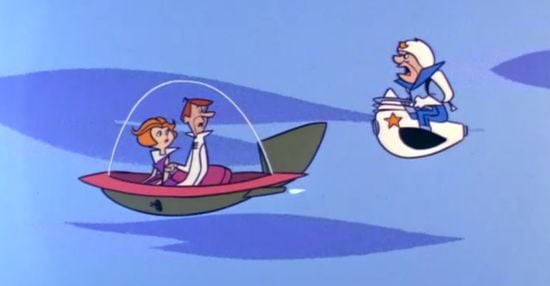 opelgt1969
This is the one on the long list it isn't the mother-in-law car:

There's about an hour until the polls close, so here's what will happen with the playoff structure.

First, I'll have to do a random draw between some cars that are tied on votes. That'll decide some of the seeding, and some cars that will not qualify for the finals.

Then I'll draw the first seed cars. Each will go into a separate group (Group A-H). I'll repeat the process with the second seeds, then third seeds, then the final seeds.

After Twitter has voted on each group, the winners and runners-up in each group will go into the playoffs, which will have the following format:

And, obviously, the final will be SF1 winner vs SF2 winner. I might do a third-place match too

This draw ensures that no car can face one it already faced in the group stages again until the final, while also mixing the draw between the two halves.

Each poll will last for 24 hr, and there will be 23 of them... which should see us through the coronavirus quarantine!


I'll do the random group draws here when the poll closes.

Crikey there was some odd late voting

I need to make two random draws. One will be either the Mr. Bean Mini or the Flintstones Footmobile to go into the top seedings. The other is between five cars for two spots in the third seed group.

I'm simply going to do three rounds of random number draws - with 1 being "in" and 0 being "out", until all the "in" spots are filled with no ties...

Edit: Tie-break one goes to the Mr. Bean Mini, which is now a top seed.

Edit: Tie-break two sees the Munster Coach in the third seed group, and the Professionals Ford Capri out. One more spot to pick.

Edit edit: And The Homer wins into the third seed group. So the seeds (one car from each seed will go to each group) are as follows:


I am so happy that the Rover 800 didn't make it. Also FAB-1 in the bottom seed group might be dangerous.

Okay, let's get drawing. First seeds up first and the first car up is...
Dukes of Hazzard - Dodge Charger; Group E

Next up is:
Knight Rider - Pontiac Firebird; Group C

Third out of the hat is:
The A-Team - GMC Vandura; Group A

Three left, and next out is...
Starsky & Hutch - Ford Gran Torino; Group F

Onto the second seeds. The first on the list is:
The Flintstones - Footmobile; Group B

Two animated cars together in Group B... Second up is:
The Saint - Volvo P1800; Group C

Tough draw against KITT for the Saint... In third we have:
Scooby Doo - Chevrolet Chevy Van; Group E

Hah, the only two Ferraris here, drawn in the same group! Next out is:
The Love Bug - Volkswagen Beetle; Group A

BA Baracus vs. Herbie. Mad. Three to go, and the next car is:
Ashes to Ashes - Audi Quattro; Group G

There's a lot of animated cars - and a lot of Simpsons cars - in the third tier. First out of the hat is:
Inspector Gadget - Gadgetmobile; Group C

Next is:
The Simpsons - Plymouth Junkerolla; Group G

That's the first of three Simpsons cars in the third bracket... and next out is:
The Simpsons - Canyonero; Group F

Fifth car in the third seeds is...
Top Gear - Opel Kadett A "Oliver"; Group B

That leaves three, and the next out is:
Only Fools and Horses - Reliant Regal Supervan; Group H

Well, Mr. Bean's Mini is, appropriately, facing down a Reliant Regal Supervan! Just two left, and they are:
The Simpsons - The Homer; Group A
The Munsters – Ford Model T “Munster Koach”; Group E

Okay, well, that just leaves us with the fourth-tier cars. Eight more to go, starting with:
Life on Mars - Ford Cortina; Group H

Next out is:
Thunderbirds - Rolls-Royce "FAB 1"; Group B

That makes Group B pretty tough to call, with the most famous marionette car of all time mixed with two animations and a Top Gear car... Third on the list is:
The Professionals - Ford Capri; Group C

Five more left, and the next is:
Supernatural - Chevrolet Impala; Group G

That one has flown under the radar a bit. Group G is looking tasty, with a Batmobile, "the Quattro", Homer's own car, and Sam and Dean's ride... Anyway, next up is:
Rockford Files - Pontiac Firebird; Group A

Not sure either of those stand a chance in their groups. And the last two out are:
Top Gear - Kia Cee'd; Group D
Viper - Dodge Viper; Group F


Those are some mad, mad-looking groups. You can see the full draw below:

So, how's the social distancing working out?

TexRex
So, how's the social distancing working out?
Click to expand...

I haven't voluntarily left the house since November, so it's been pretty standard for me. The only impact it's had is that there's two more people in my house and getting in the way.

What's the Greatest Ever TV Car? Have Your Say in Our World Cup of TV Cars!
2 3 4

The World of Pokemon in cars

Should race cars be allowed to be nominated for the Cool Wall once again? (POLL)