I get huuuuge wheel spin from the Formula Gt in particular...if I'm smooth I'm slow out of the corner with no drama but then if I speed up just a teeny tiny bit the wheels spin up. I'm aware my throttle control needs a bit of work (quite a lot actually

) but what's the secret?

What the question is; what's the key to going fast out of corners with no rev limiter action and wheel spin? I short shift...bogs down. I go smoother...slow down. I speed up a bit... wheel spin. I've tried being smooth and fast but it's such a fine line I can't do it, practice doesn't seem to be going well either

I found that I was getting on the gas too hard and too soon on the exits and had similar problems to you. Putting the power down gradually was key to me, always increasing RPM but never spinning wheels. Once I gain enough traction to put the power down I imagine a line in my head. If I go full throttle the line goes straight up. If I'm on and off the throttle the line is a jagged mess. I want a nice upward curve

My explanation is somewhat unorthadox and I will admit you might not want to adopt my imaginary line idea but you get the general principle.

Hope you can gain something from reading this.

You are correct when you say throttle control is key. 👍

That. Basically, you would want to gradually raise throttle slowly as you exit out of a corner. This is must when TCS is off and cars that technically doesn't have one, esp. the FGT. And my method of knowing when to raise throttle is the same as Steg's, but around after the apex when I start to raise throttle.
Last edited: Jul 25, 2011

Sometimes its my LSD. But thats just me.

samie57
Sometimes its my LSD. But thats just me.
Click to expand...

LSD can help with wheelspin sometimes, but not by a long shot.

The FGT is very sensitive, and I'm not good with it at all.
But in general, cars that need sensitive throttle control, yes ease on the throttle after hitting the apex... And generally just never get on full throttle until you've straightened out the wheels completely.

Also, with some cars...some cars are VERY forgiving about you plowing through a corner after braking too late & swinging round. But there are some cars where you simply cannot do this if you want to get through a turn fast without drama! It's absolutely imperative that you slow sufficiently before turning in, in order to be able to throttle out in a smooth & efficient way early enough.
It may seem counter-intuitive, but you may find you can get out of a corner faster when you've slowed much slower going in!
Thus the expression, "Slow in, fast out"

Turn Traction Control on. Put it on 8 or something.

PM Me and ask

Ferrari_1996
Turn Traction Control on. Put it on 8 or something.
Click to expand...

Traction control set to 1 would suffice as long as you don't mash the gas as soon as you can.

I set my gas to the R2 button which is easier to accelerate gradually because R2 is more like a Motorcycle throttle.

TCS on 1 is a good idea if you can but as above throttle control and taking the correct line in/out is most important here. Dont accelerate hard until after the apex of the corner, if your car has completed the turn when you accelerate your too late on the gas, if it is on max turn required when you do your too early. Somewhere in between.
Tough to explain.

I'll try the throttle control thing it just feels so much slower...but then it's smoother so it would do I guess. As for traction control, without sounding like an over inflated ego I'd prefer to fine tune my throttle control.👍

Cheers for the help and response guys, much appreciated.

FGT aside, there are only a few cars in the game at 600pp or less and a few corners in the game, that the LSD cannot control wheelspin for. From what I've seen, most people set their LSD's way too high. With racing softs in particular, you get lots of grip, so LSD settings of around 8/15/5 will suffice for most cars, to get both rear wheels working, and neither one spinning faster than the other on corner exit. Set the ACCEL value too high, and you get outside wheelspin on some corners and lose the back end. Set it too low and you get inside wheelspin, no loss of control, but a loss of potential acceleration. The sweet spot on most RWD cars is between 11 and 18 ACCEL.

In race cars, with much bigger tires it can be even lower. GT500 cars for example work quite well with 6/10/5 or something close to that.

Something else that also works with wheelspin is some positive toe out in the rear. Helps to stabilize the car under hard accel and make it go in a straight line.

Of course having the right tune and the proper suspension settings helps too. A car that is set up to be loose in the rear because the rear is too soft for it's weight distribution for example, will result in a higher tendency to lose the back end under braking and acceleration.
D

elitedriver123
LSD can help with wheelspin sometimes, but not by a long shot.
Click to expand...

If you put the FGT's LSD down to 5,5,10 I guarantee that it will irradicate 90% of you're loss of traction.

I think everything comes down to this: 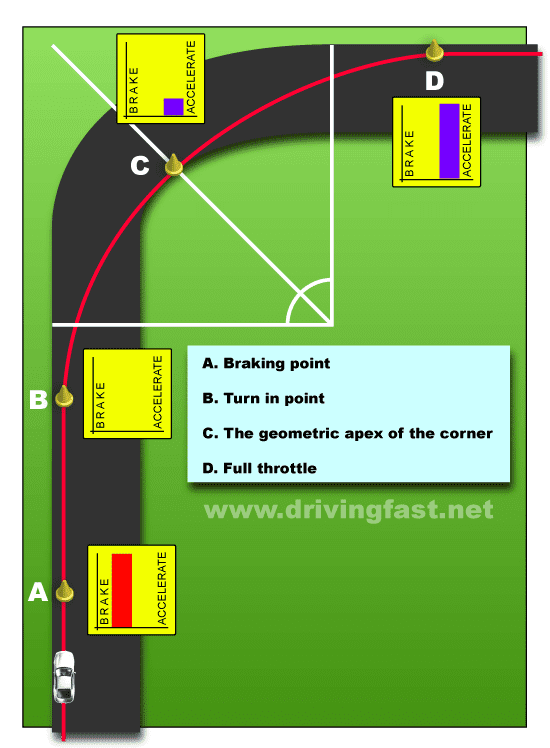 Get used to it and traction won't be a problem either.

I do think that practice and experience is the biggest thing but also make sure that you have the correct tires on, such as racing soft tires for maximum grip.

Since I got a wheel and pedals, corner exits are so much easier and more natural.

With a DS3 you need to use the controls that you're most used to (the X button still gives a lot of control, you'd be surprised) and just practice.

Try the Mclaren MP4-12c at trial mountain. You will begin to learn throttle control because in this car, it's almost absolutely necessary to be at 90% throttle for all of the bumps, yet it still accelerates like crazy. Getting used to this car on a bumpy track with a DS3 is how I mastered throttle control.

It just takes practice. Be patient and it will come naturally to you. It's the sort of thing you can't ask, it's something your brain has to figure out for itself. All we can do is give you pointers which you are probably aware of anyway.

With the FGT you just need to put in as little steering lock as possible, make sure you use the whole road, take a wide line but make sure you hit the apex and slowly straighten the car out as you are applying power. Steering control is almost as important. Brake control on the entry helps too, but now i'm rambling

No rambling just pure sense my man 👍 I've got to try that actually and see how I get on.

Ok so coming out of a corner has to be fine tuned smoothly and fast...I will train at that. How do you guys start from a stationary position?...Again smooth is too slow compared to the AI but too much and I get wheel spin and hit the rev limiter.
M

Mr. S
I think everything comes down to this:

Get used to it and traction won't be a problem either.

That line is for 'normal' cars.
If you drive a car that has a rediculous braking/accelerating curve it's better to brake later, steer sharper and the accelerate in a straighter line.
Something like this: (excuse my crappy paint skills) 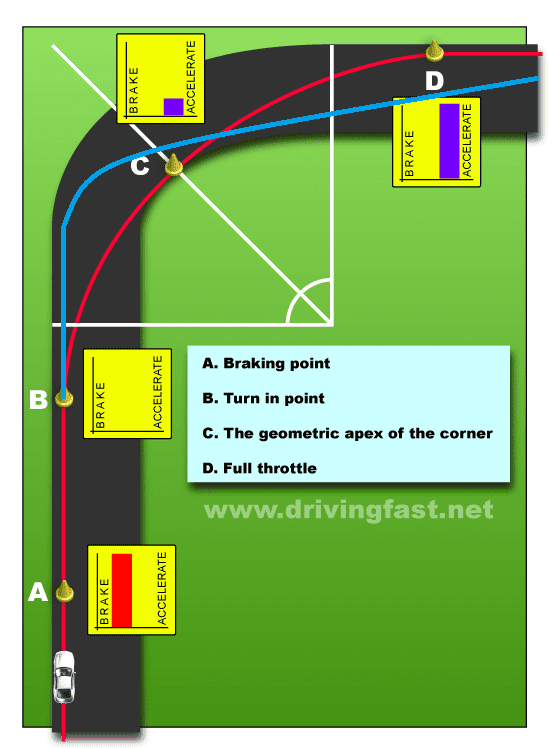 So if driving the FGT that line would be better.
If conditions get worse, like in rain, use the line for normal road cars again.

I love the above diagram! awesome!
M

berty1979
I love the above diagram! awesome!
Click to expand...

You'll absolutely loooove this then

This is exactly what I meant to say but they have better pictures of it.
http://www.drivingfast.net/techniques/racing-line.htm

Merquise
That line is for 'normal' cars.
If you drive a car that has a rediculous braking/accelerating curve it's better to brake later, steer sharper and the accelerate in a straighter line.
Something like this: (excuse my crappy paint skills)

So if driving the FGT that line would be better.
If conditions get worse, like in rain, use the line for normal road cars again.
Click to expand...

Can't produce such a stunning picture, but the braking phase should be full brakes until the moment of turn in followed by a gradual reduction in braking until the apex... aka trail braking.

This allows the intial brake point to be much later and also help to reduce understeer on turn in by moving more of the weight on to the front wheels.

The late apex is my standard corner for most cars and most corners on racing softs back to my karting days and on GT5.

Someone asked about starts. In a 4wd car you just floor it and go, and it often means a second or two advantage by the first corner, especially in higher powered cars. Won a lot of races online just by being first into the corner and avoiding the chaos behind me and will sometimes pick a 4wd car just for the start.

In RWD cars, it depends on the car and HP. During practice/qualifying stop the car on a flat part of the track and practice first a second gear start. If you can start in second or even third in some cars and not bog down the engine, that's the way to go.

Under 500 hp most cars are 1st gear starters. I set up the transmissions on most cars for a very tall first gear, that is, the slider to the left, usually all the way. This will allow for more easier traction, more time in first gear and overall better starts. I feather the throttle more or less depending on the hp and try to keep wheelspin to a minimum, although I think most cars start faster with some wheelspin.

In a lot of FWD cars, a second gear start is a must, but again, you have to practice it at some point because every car is different. A Mini at 450 pp will not be the same as a Focus at 520pp. Again, a taller set of gear helps with the start and feathering the throttle.

You'll absolutely loooove this then

This is exactly what I meant to say but they have better pictures of it.
http://www.drivingfast.net/techniques/racing-line.htm
Click to expand...

You were right, i did love it, im a driving geek

Guys you've helped me take an average 1.5 to 2 seconds off of my formula GT laptimes 👍 thanks.

FFB Sensitivity Setting what do you actually feel from the wheel