Which gaming headset to get?

It has reached the time of year where my better half has started asking what I would like for Christmas, and I have decided to get a headset for the PS3 so that she doesn't have to hear what is going on in the game I am playing.

I am looking to spend up to around 100.

Assuming the cable is long enough, wired/wireless doesn't bother me too much, as the convenience of wireless is offset by the need to keep the battery juiced up.

I'm not exactly an audiophile, so the premise of good quality over great quality is a little lost on me, I just want to hear the game sounds as well as clear voice chat in and out.

So far from a brief look around, the official Sony one (89.99) looks like it would suit me fine.

Does anyone have any opinions on alternatives that get better bang for the buck, or is that one pretty good as it is?

I've just ordered the Sony Pulse headset, which seems to be the next model up from the one you linked to. I don't have them yet so can't comment on how good they are, but they seem to be a good headset, although people are complaining they break too easily. I take good care of my stuff though, so I'll see how they do.

I have a Steelseries Siberia headset for my PC, and they sell a PS3 version. The sound is reasonable, and they're so comfortable it's ridiculous.

I've got 2 head sets, both turtle beach. 1 is the XP500, these may be a bit out of the price range as these are high quality. The other is PX21, these would be more suitable. Both are cross-platform-able to PS3/Xbox360/PC. Well rounded headsets that I personally can't fault.

Thanks for the input guys. 👍

All sound like good options, but I think I am still swayed towards the Sony one, unless anyone out there has had any problems with them?

I've got one of the official Sony headsets and have had zero problems with it. They're comfortable, have good battery life (I get upwards of 6 hours from a charge) and the sounds quality is quite good.

I read that you are able to have it plugged in and charging while in use. Is the placement of the charging socket any good for this to be practical?

On the Pulse, the charging socket is on the base of one of the cups where the cable would be if they weren't wireless, so as long as your usb cable is long enough, there shouldn't be an issue.

That's what I was hoping, but from the pics of the cheaper one, the USB socket seems to be mounted so that the cable would sit horizontally when on the head.

Barra333
That's what I was hoping, but from the pics of the cheaper one, the USB socket seems to be mounted so that the cable would sit horizontally when on the head.

See the 2nd and 5th pictures here
Click to expand...

Here's where it is on the Pulse. 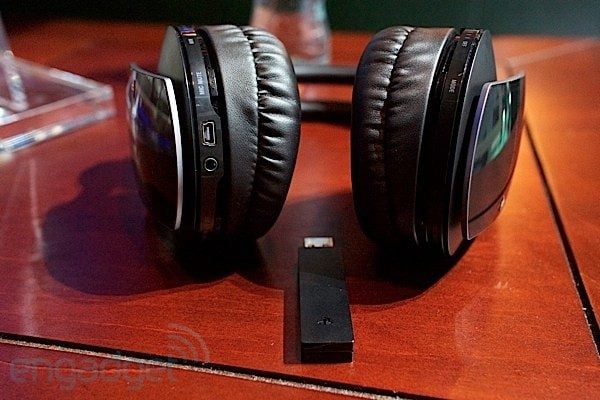 The other socket is an audio in so you can use them on things that don't do wireless.

That makes sense. It looks like the ergonomics of the one I'm looking at dont allow that sort of placement.
I will wait and see what Korza (or anyone with that exact model) says.

How are you finding the Pulse headset?

Barra333
How are you finding the Pulse headset?
Click to expand...

I've not had a chance to use it yet, other than putting it on my head to see if it was comfy (which it was.)

Barra333
That makes sense. It looks like the ergonomics of the one I'm looking at dont allow that sort of placement.
I will wait and see what Korza (or anyone with that exact model) says.
Click to expand...

You can use them while they're charging. I find that the socket placement isn't much of an issue but I tend to sit near my PS3 so I can easily run a USB cable to it if need be (its the same if I'm using them on my desktop/laptop).

One thing though, don't lose the USB stick used to transmit the audio; they're encrypted which means you can't buy a replacement one.

I'm thinking of getting some of these too, find the standard clip on, a little uncomfortable after a time.
Will be able to use them on my computer, which is a plus.

Has anyone had any problems with these?

Gidday, I recently purchased myself the Turtle Beach PLa headset engineered for the ps3. I payed $40 for a set. The only down side with the PLa i have found is the wired cord tends to become tangled quite often (no biggy).Otherwise, honestly i have never had any issues with this headset . They have a good balance of low bass and sharp treble, simple to operate and quite comfortable. I recommend these as a low budget ps3 headset.
Last edited: Oct 29, 2013

Just to let you know (for anyone who cares), I was given (read: asked for) the Sony headset for my birthday. Played quite a bit yesterday and Wednesday and am quite impressed. Very immersive in GT6. Have yet to give the mic a run though.
Thanks for the input 👍
My girlfriend considers it a gift for both of us - I get a headset and she gets the benefit of not hearing the PS3.

Barra333
My girlfriend considers it a gift for both of us - I get a headset and she gets the benefit of not hearing the PS3.
Click to expand...

daan
Ah, yes, I can see how that's not as handy.

Here's where it is on the Pulse.

The other socket is an audio in so you can use them on things that don't do wireless.
Click to expand...

I have a pair of those. Two things:

1. You will want to be *VERY* careful when putting them on and taking them off. I am a careful person with my 'technology', and both sides of my headset cracked where the silver circular part attaches the actual earphone devices. I have had mine for less than a year at this point still, and already replaced them with some Corsairs because:

2. They do not respond any longer to USB charging, nor can they be used in a wired fashion. The USB port on the headset has shorted out.

I got my official Sony headset for my birthday, too, and I love mine. Chat is very high quality too. I think you'll enjoy it.

This thread got me to break out my Pulses again tonight. USB is working again. Thought the battery had gone kaput, but thankfully not.

Did you try it with headset on.