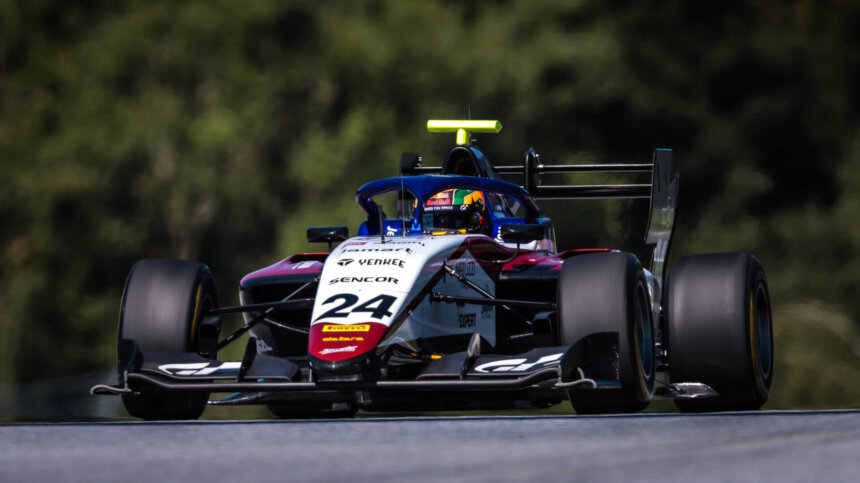 Spielberg has not proven a happy hunting ground for 2018 GT Sport world champion, and 2020 Toyota Racing Series champion Igor Fraga. For the second time in a week, the Brazilian has come away from Austria’s Red Bull Ring without a point to show for his efforts, thanks to technical issues with his Charouz.

The FIA Formula 3 championship was again supporting the F1 double-header in Austria — with this week’s event dubbed the “Styrian GP”, after the region of Austria in which it’s located. Fraga would have good reason to be optimistic, with an eighth-fastest time in practice and an eighth-fastest race lap in the second race the previous weekend not reflected in the results.

However, it wasn’t to be. Another issue in qualifying caused Fraga to park his car just five minutes from the end of the session, bringing out a red flag. With no opportunity to improve his time, that left Fraga in 24th for Race 1. A lack of wet running meant a race of little joy, and though he was able to improve to 23rd by the time the red flag came out, he had been 26th at the end of the previous lap and that counted as his finishing position.

It was the dry Sunday morning that saw Fraga’s best performance yet. Starting in 26th, the Brazilian managed to make up 12 places in the 24-lap sprint race to come home in 14th — ahead of both Charouz team-mates David Schumacher and Roman Stanek. It wasn’t enough to get on the scoresheet for the first time this season, but nonetheless a positive result from a difficult weekend.

“It’s really unfortunate because just like last weekend we had technical trouble in Qualifying and again I couldn’t get the laps in to be able to start towards the front. We have the pace, we could have been there but it is kind of frustrating.

“Yesterday was kind of a snowball for me, it was the result of the two weekends and the problems we had. Because of the issues last weekend I did not get the running in the wet that I should and then in Saturday’s race with so much rain and spray I missed having the practice is those conditions.

“Race 2 was much better, the car had a good balance and I enjoyed the race. I could make up quite a lot of places just like I did last week. Those races are OK but really we should be starting for a lot further forward. We should next weekend.”

F3 returns for a third successive weekend this coming Friday, with the action moving to the Hungaroring near Budapest, Hungary. Qualifying starts at 0645 UTC Saturday July 18, with Race 1 at 1520 UTC the same day, and the sprint race at 0725 UTC the following day.

Motorsports 67 Aug 2 by Andrew Evans
The 2018 GT Sport world champion Igor Fraga has had another weekend to forget in FIA Formula 3, after his car broke down during the sprint race at Silverstone. Perhaps…

Motorsports 67 Jul 19 by Andrew Evans
A third-lap incident in the FIA Formula 3 race at the Hungaroring robbed GT Sport world champion Igor Fraga of his first chance to score points this season. After two…