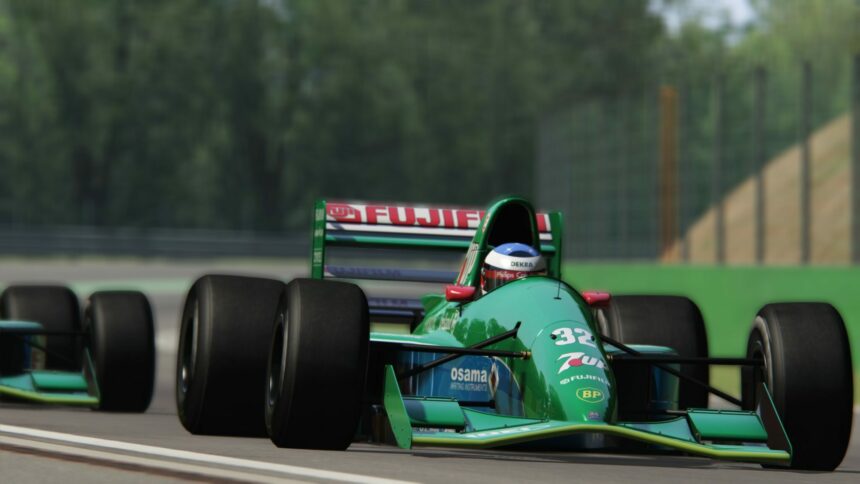 Michael Schumacher. That name will forever be synonymous with Formula One. That name could be the definition of success. He is a man that redefined the record books. A man filled with unrelenting desire and determination. He’s a man that became a hero to me and a legend to the world of motorsport.

To mark the 50th birthday of “the Michael” (as Mika Hakkinen once called him), I wanted to do something to mark his half-century on this world. I came up with several video ideas, but, in the end, I settled on going back to where his Formula One journey began – the 7up Jordan at Spa.

Before I get onto that though, I want to run through some of his numbers and what makes him special to me. 91 wins, 68 pole positions, 77 fastest laps, 155 podium finishes and seven world titles. He redefined success in Formula One. Before him, nobody had been able to match Fangio’s five titles, let alone surpass the great Argentine.

But what was it about him that made him such an idol to me? It’s no secret that Schumacher wasn’t exactly popular in the UK during his most successful period. His rough on-track treatment of both Damon Hill and David Coulthard was reason enough for him to be disliked. His move on Jacques Villeneuve in the 1997 European GP also brought widespread condemnation. But for me, watching him drive those epic laps, stints and races was like nothing I’d seen before.

His attention to detail and work ethic were keys to dragging Benetton and Ferrari up with him. His ability to make seemingly crazy strategies work, put in the most amazing laps under the most intense pressure and deliver extraordinary performances was second to none. He didn’t just beat his rivals on the track, he beat them in their heads.

It’s easy to look at 2001, 2002 and 2004 as easy years for Schumacher, but that would miss the years where he won races and nearly won championships in slower machinery. He dragged a Jordan, Ferraris, and Benettons to places they had no business being at times. His victories in 1996 and 1997 will go down as some of his finest. He more than earned his historic success as the years went on.

Despite his controversial moments, his qualities were and still are something to look up to. Despite his success, his passion still burned as bright as the sun. After so many years of dominance, you’d think it would be hard to keep up such a level of enthusiasm and desire, but not for Schumacher.

Even at the age of 37, he went toe-to-toe with Fernando Alonso. Alonso, at the time, was the youngest world champion in F1 history. But the elder statesman of Schumacher took him down to the wire. Without his engine failure at the Japanese Grand Prix, we might well be talking about an eight-time champion.

Despite three years away and being 41, his return in 2010 was something of a fairytale. While he appeared to be a little more mellow, you could still see that burning passion that defined his first run in the sport. For a 41-year-old to run a future world champion (Nico Rosberg) so closely, was utterly remarkable.

Then came the crowning glory – his pole lap at the 2012 Monaco Grand Prix. When P1 popped up on the TV graphic, there was euphoria. For a moment, it seemed like the whole motorsport world was united in a truly special moment.

Is it any surprise that Schumacher helped to lay the foundations of the current Mercedes dominance? Not to me. We’re talking about a man that was more than a driver. Mercedes knew exactly what it was doing in 2010. Perhaps he was never meant to reap the rewards, but his knowledge has proven priceless for them, Lewis Hamilton and Nico Rosberg.

I know it’s taken me a while to get here, but I did mention something about taking his 7up Jordan around Spa. Despite various ideas, it seemed like the most appropriate. Schumacher had a love affair with Spa. He made his F1 debut there, took his first win and secured his seventh world title in the Ardennes. In total, he won in Belgium six times.

This is one of the many things I love about sim racing. You can find things like the Jordan 191 in a game and experience just a little piece of what your heroes did. Just for a while, I can pretend that I am Michael Schumacher at the start of his incredible Formula One journey. I get to fling, slide, and heel and toe in a car that has Michael Schumacher’s name on it.

While the mod in Assetto Corsa is a little on the fast side, it still offers a real challenge. Any car that goes this fast with an H-pattern gearbox will demand all your attention. Despite the downforce, you still have to be patient and precise. One wrong shift and you can blow the engine or lock the rears and spin. Slightly too much pressure on the throttle and that slide will become a spin or a crash – quite the culture shock after so long in a 2016 hybrid LMP1 car!

The Jordan 191 is 28 years old. It’s remarkable to think that this is where it started for Schumacher in F1. The eras that his career spanned, the regulations that he adapted to. It takes remarkable and extraordinary talent to adapt and be as successful as he was.

Assetto Corsa Competizione 59 Jan 22 by Andrew Evans
This year’s GT World Challenge will see one of the strangest real-world/esports crossovers to date, as pro racing drivers could win points towards their championship challenge from sim racing. The…