I bought another car. I really wasn't expecting to, in fact I thought that I'd been just about priced out of the Type R market. I was thinking that it was a riskier purchase the higher the price went, and that ultimately it would cost enough that I'd just be too worried about it to pull the trigger. Instead, it went for less money than I expected and I have another car now.

It's a '98, with just less than 50k mi, and a very clean history. No accidents, a repaint on the door for a scratch (door is original), and a front bumper replacement. The owner had installed a bunch of aftermarket stereo bits, which is why the auction stopped early I think. I wasn't planning on even participating until the owner explained that he had all of the stock stuff ready to go and that no holes had been drills or wires cut. As a result, the first weekend I owned the car I took out all of the seats, tons of side paneling and the center console to remove the aftermarket bits. Amplifiers, wiring, speakers, and head unit all came out, and stock parts were returned to their proper spots. 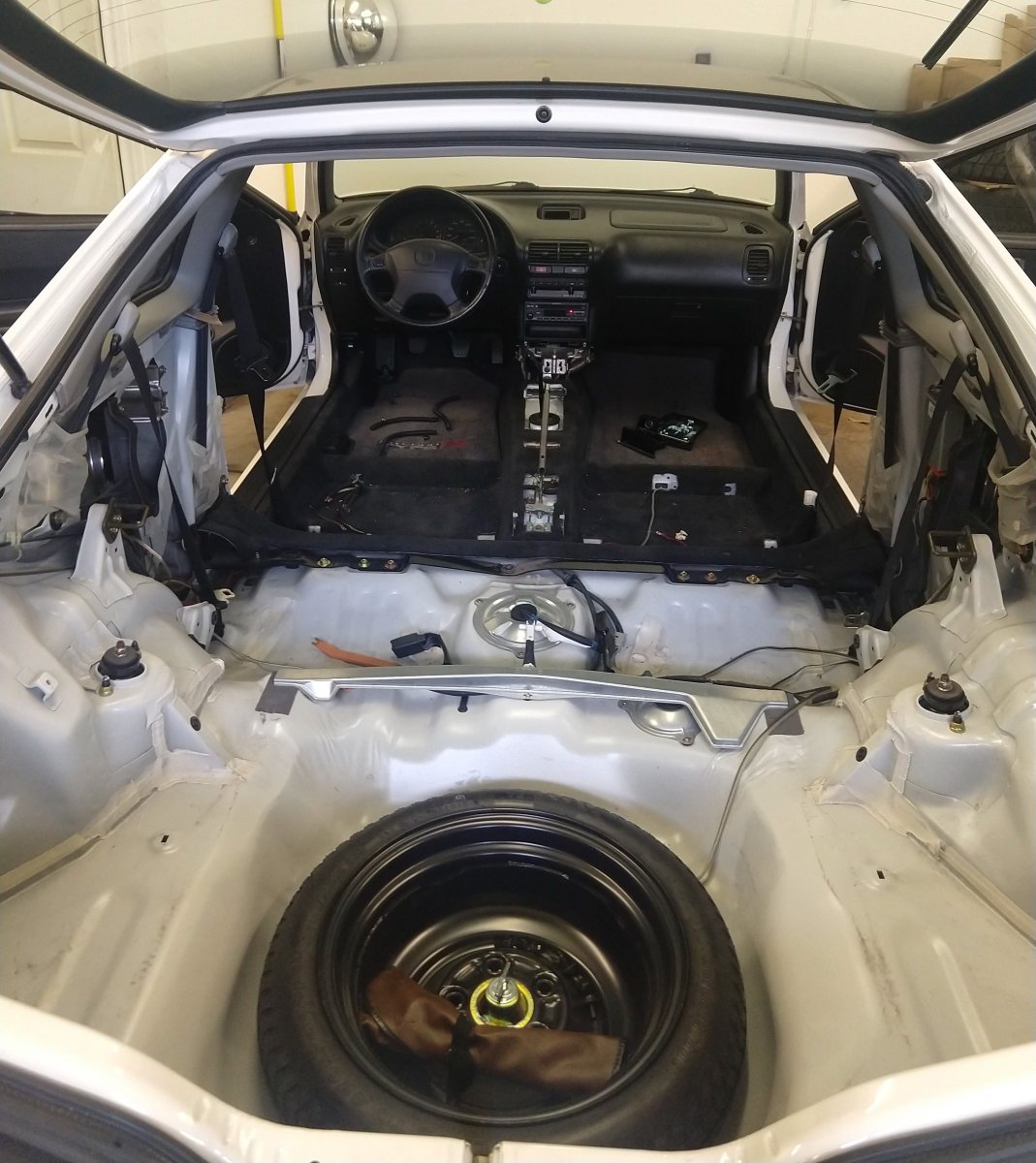 With all of that sorted out, it was time to get it to the right mechanic over at Acura to get a thorough inspection and get the stereo code. The car seems like it's in excellent mechanical shape. I had the dealer replace a leaky oil pan gasket and do some fluids, alignment, and some kind of fuel injector cleaning. Once I got the stereo code, I discovered that one of the door speakers isn't working, a replacement speaker is en-route.

Anyway, that's about as clean as can be really. Here's the photos: 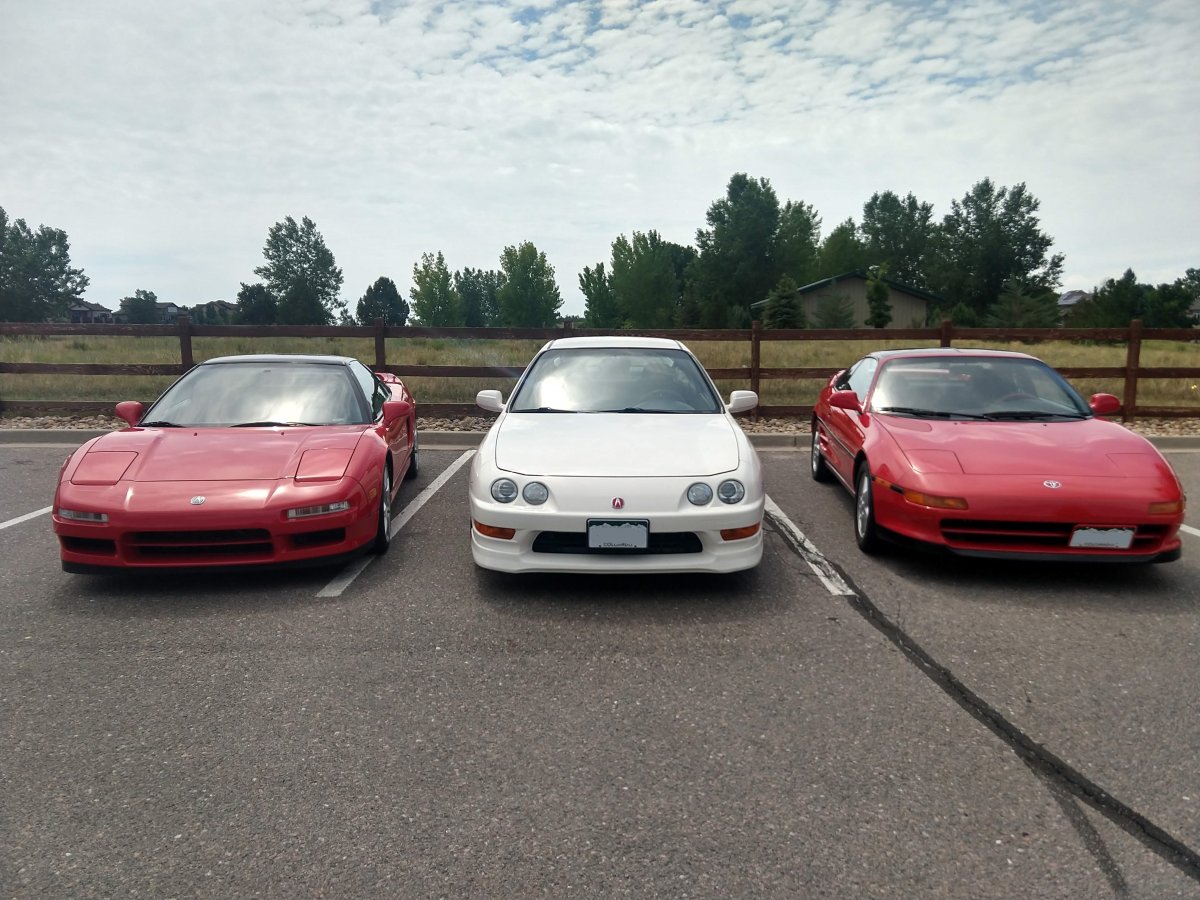 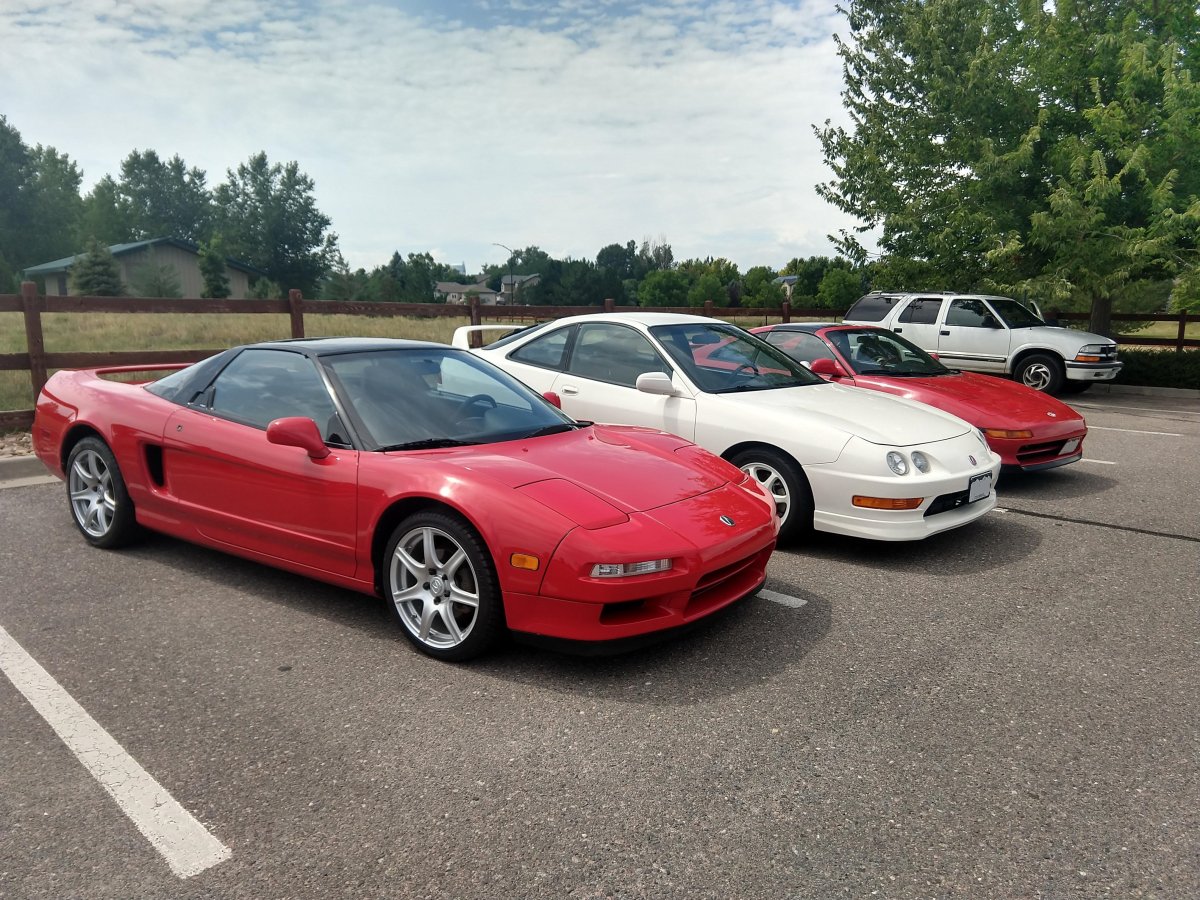 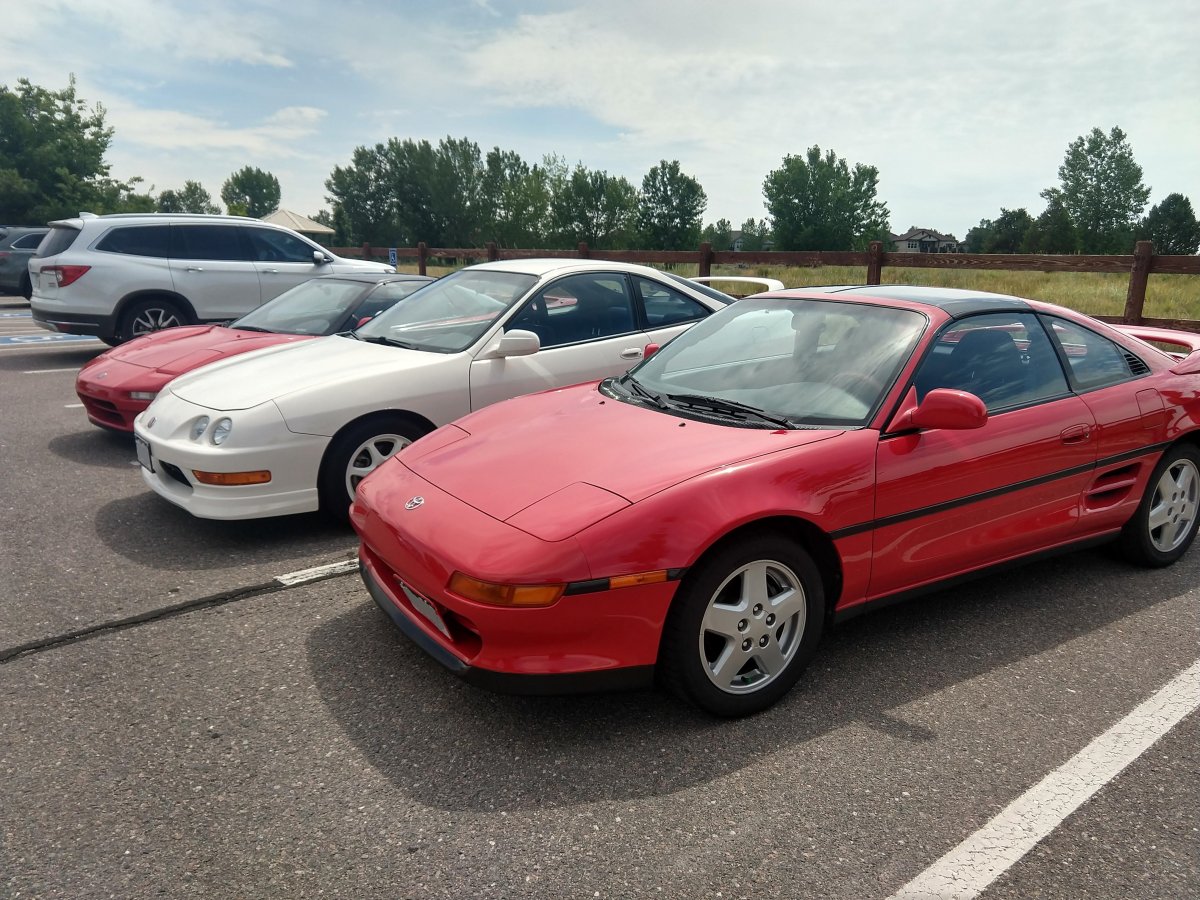 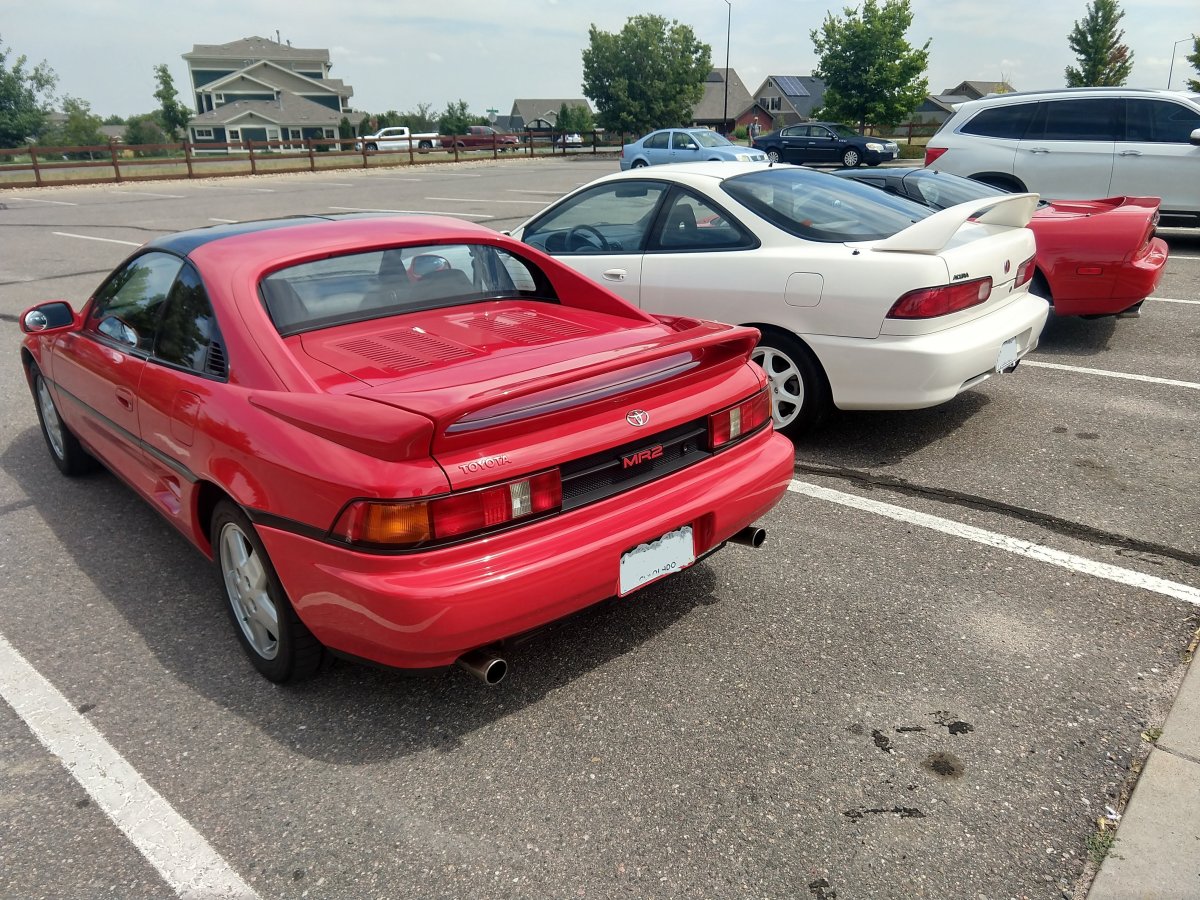 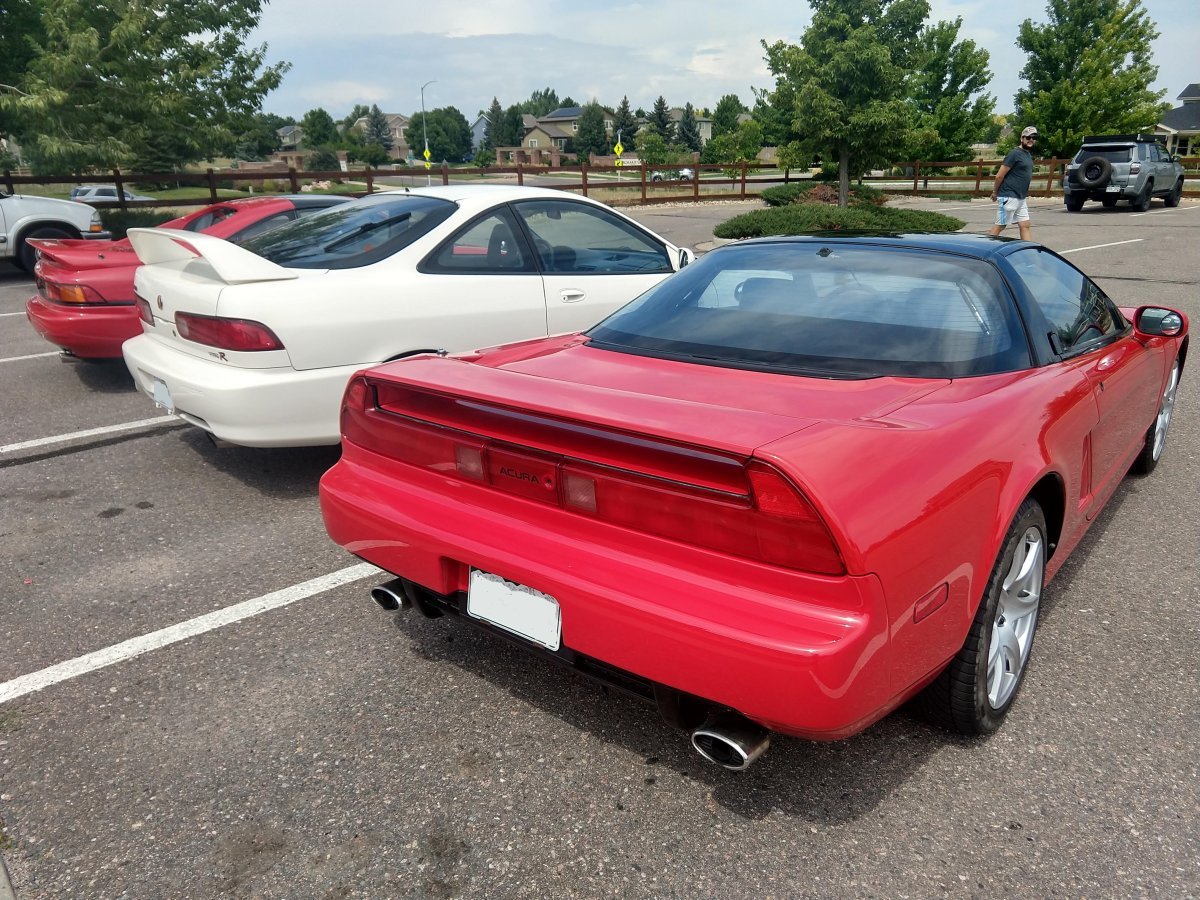 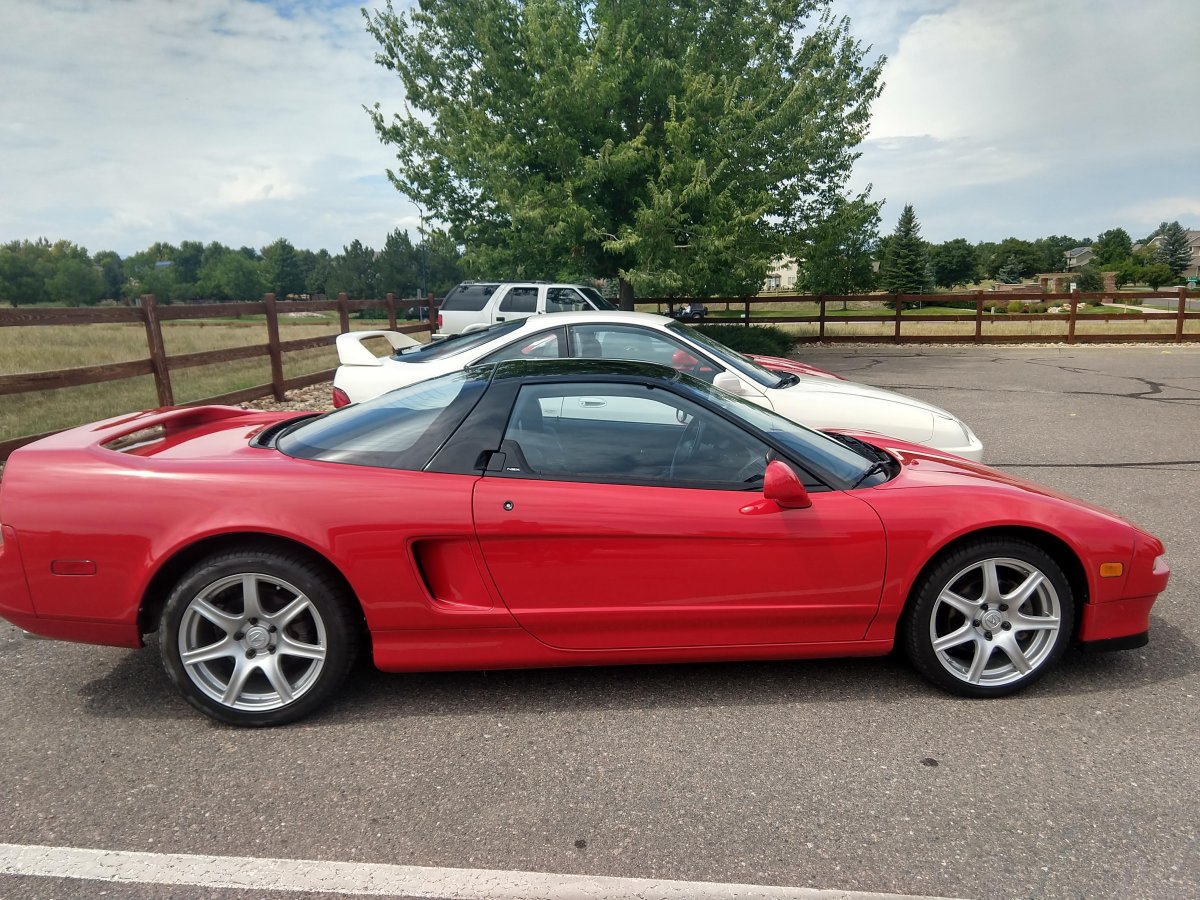 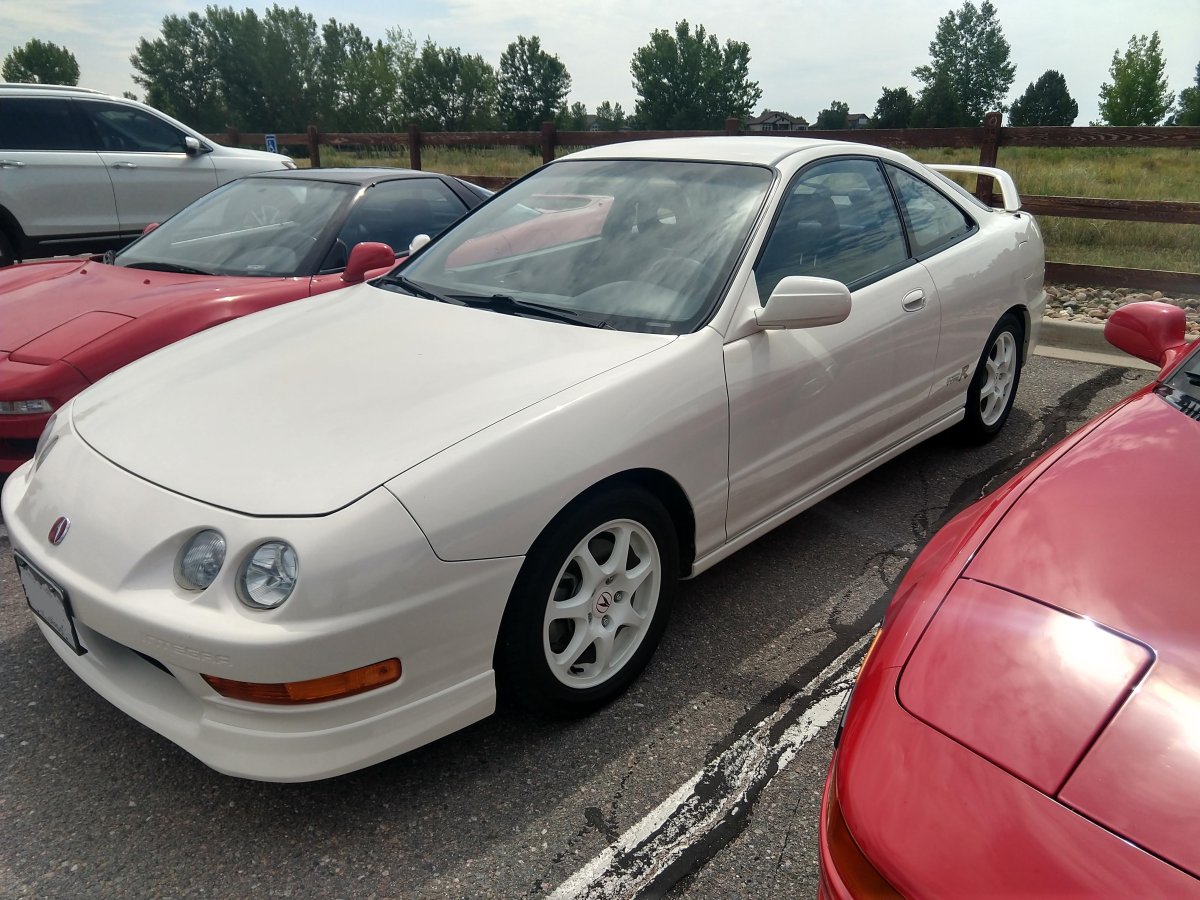 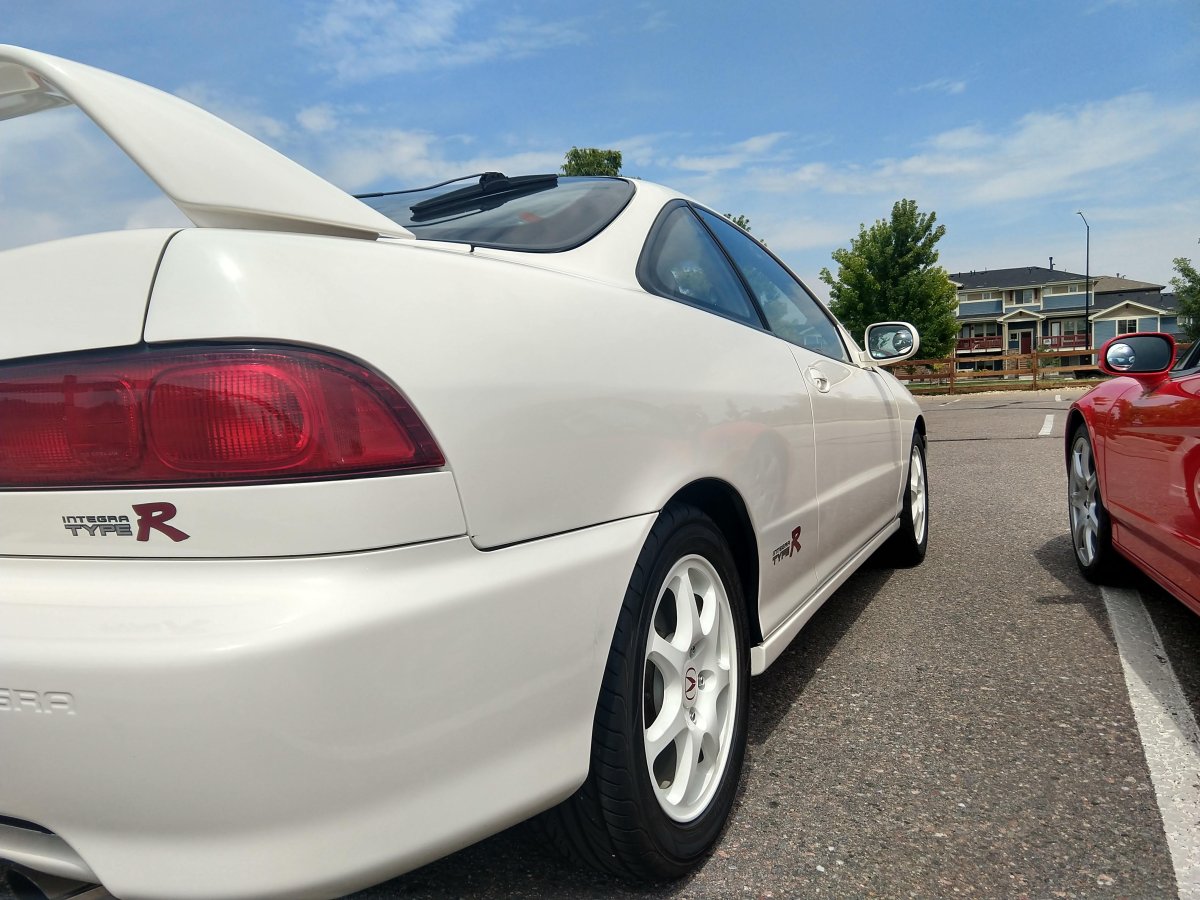 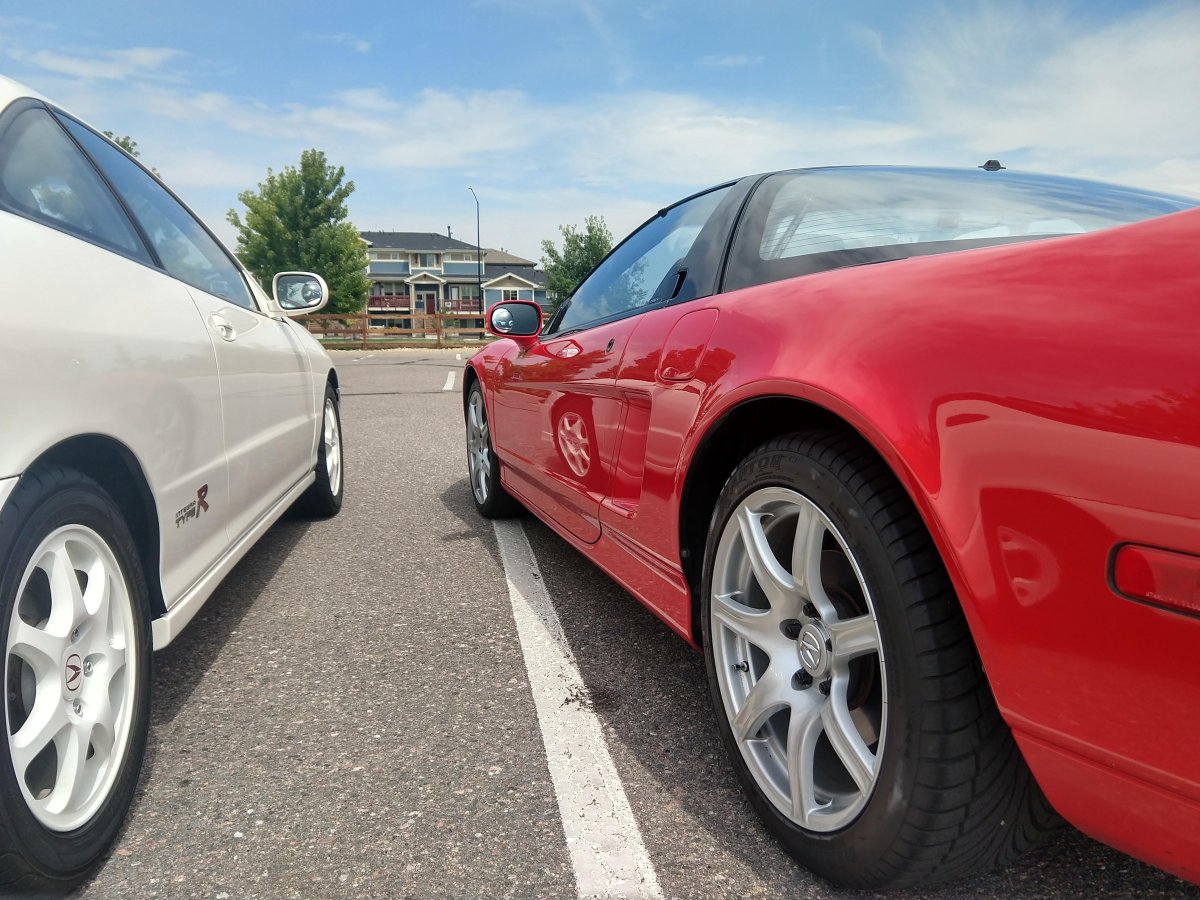 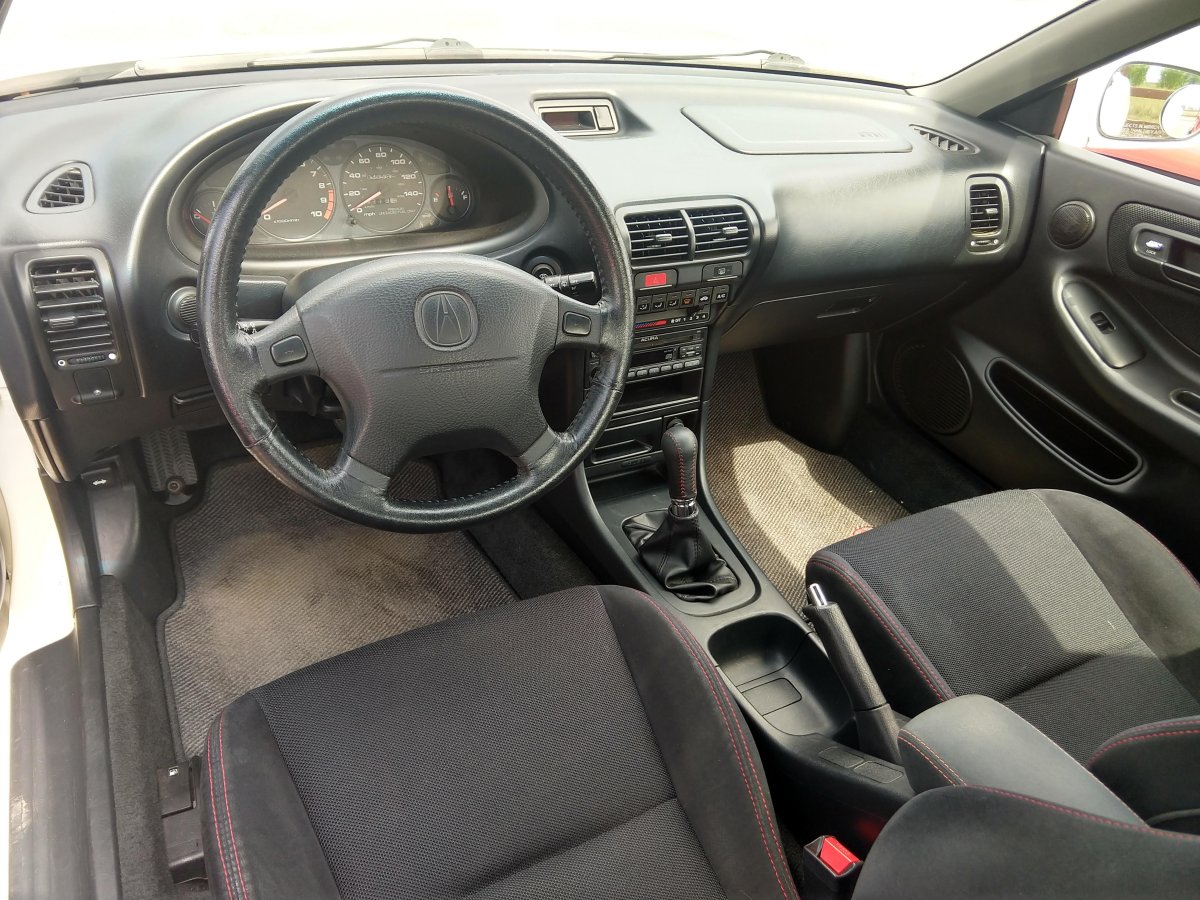 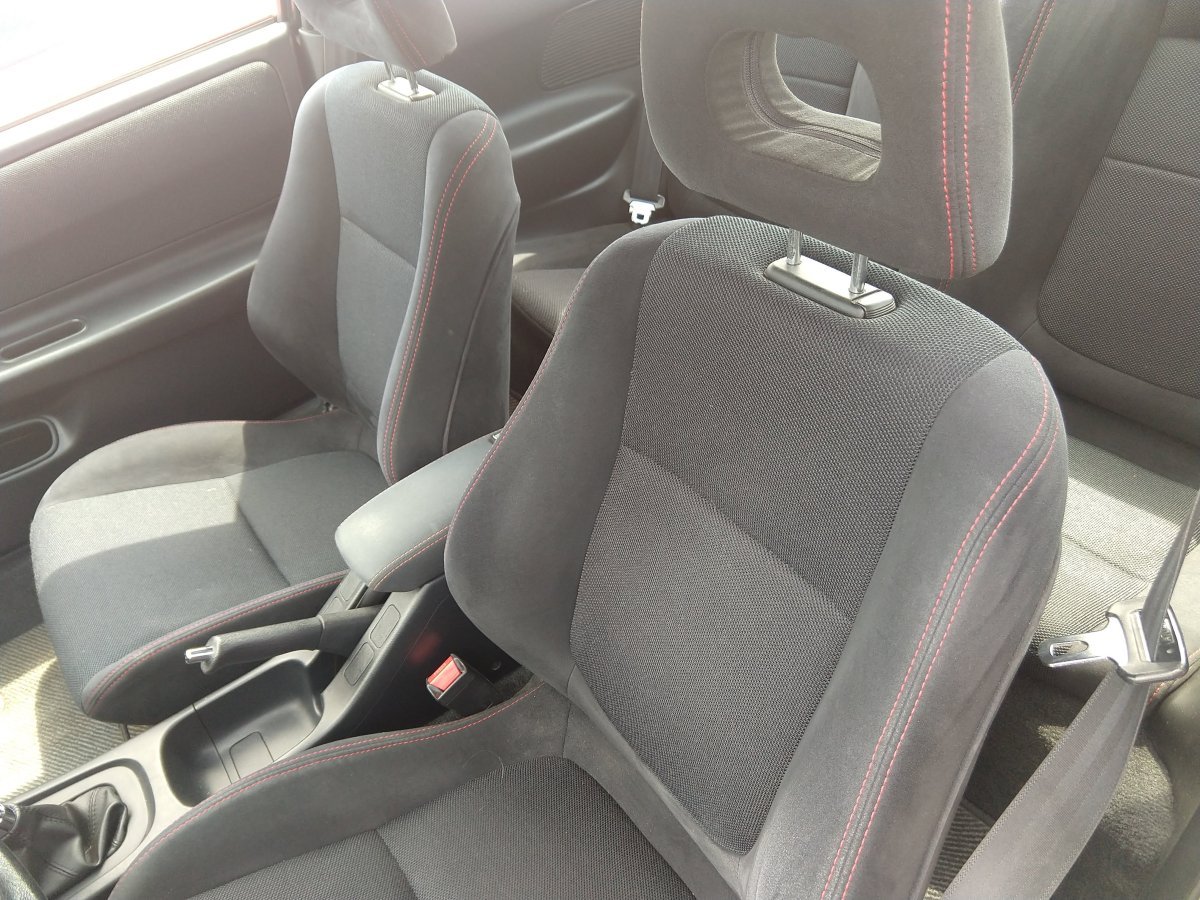 I love the way the car drives. The steering is very 90's honda, which I'm a big fan of. Handling is superb, astonishing really if you can keep in mind that it's a front wheel drive car, which is not that easy to keep in mind. The transmission feels great. The engine just absolutely screams when you really get into the revs, which is wonderful. And it's quick without being too quick, which I'm a huge fan of. Overall, the car is just amazing. If I had one complaint, it's that heel-toe is tricky because the brake grabs fast.

Of the three cars pictured, honestly I do have trouble picking a favorite. It's probably the NSX, because that 6 cylinder noise and the mid-engine balance is so great. But I can make a case for any of these cars being the best. Some of you will be wondering how the MR2 can top the others, but the MR2 is just so completely accessible on the street. And the steering might be the best in the MR2.

Yeah that subwoofer enclosure they had in it was pretty atrocious. Looked like he installed it in an afternoon with crap he got on a Wal-Mart run. I suspect the seller probably could have gotten more interest simply by yanking it out and hiding the wiring in the pictures.
Last edited: Aug 21, 2022

Tornado
Yeah that subwoofer enclosure they had in it was pretty atrocious. Looked like he installed it in an afternoon with crap he got on a Wal-Mart run. I suspect the seller probably could have gotten more interest simply by yanking it out and hiding the wiring in the pictures.
Click to expand...

I actually asked him to keep that.

Major congrats, Dan! Happy to see your patience paid off & landed you what you wanted. She should compliment your little stable with the MR2 & NSX really well.

Any plans for her, or just keep her OEM as possible?

I promise I'm just admiring, but I do love how this gif is also simultaneously super creepy.

Congrats on the purchase Danoff! Hope you enjoy every second of it.

McLaren
Major congrats, Dan! Happy to see your patience paid off & landed you what you wanted. She should compliment your little stable with the MR2 & NSX really well.

Any plans for her, or just keep her OEM as possible?
Click to expand...

Just as stock as possible. Needs new tires, replace the driver's door speaker with a working speaker, change out the power steering and brake fluid. It's basically done.

There is some spidering in the paint in one spot on the rear bumper. I could have that looked at. I don't see any dings that need PDR. Mostly the plan is to just enjoy it, try not to get it stolen or wrecked, and keep the gasoline from going bad.

Between the three cars these things are only getting like 100 miles per year.
Last edited: Aug 21, 2022

Nice quiver of JDM classics you have there 👍🏼

That's epic. You definitely got a peach.

Danoff
There is some spidering in the paint in one spot on the rear bumper.
Click to expand...

I just realized I got a photo of said spidering. It's the second to last exterior photo showing the type R badge below the rear lights. You can see the spidering as a tiny light-blue-grey spot about half way up the rear bumper right next to the wheel well.

Awesome nice to see you got one. If you ever need to offload the MR2...lemme know.

I see you with those rims on the two tone model NSX. ❤️

Former Dc2 r owner. How much do these fetch now?

My god, look at the driver's seat. It's flawless.

mef
Former Dc2 r owner. How much do these fetch now?

They're up around 60-90k for something in great condition.

The ITR scratches a 90s honda itch for me in a way that the NSX somehow does not.

Outstanding fleet you have there! Congrats on the Type-R.

We had 3 Integra GS-R's. We bought each new years ago. Fantastic cars. Everything about them is near perfect. Your Type R was the pinnacle of the series.

Acura lost their way when they discontinued that car. Look at the Integra now. A Civic for big money. Blech.
Last edited: Sep 26, 2022

LEGENDARY, truly unique of its kind, and even more, word cannot explain.

Sincerly congrats on your purchase and keep it for ALWAYS my friend!
Last edited: Sep 28, 2022

Thanks! In case you hadn't seen it, this is the thread for the NSX:

Here's the ride as purchased (1993 Red/Black NSX Manual): I took apart the interior to do a little restoration Here it is with new shoes (these are the stock rims from a 2002+ NSX which I think look better than stock for the '93) Basically, the interior is back together the way it...

Don't feel too jealous, I put the vast majority of my driving miles on a minivan.

Hope everything is great @Danoff. Amazing addition with the ITR. Thanks for sharing