Era of the "Bit Wars"

Does anyone here know of the famous/infamous "Bit Wars"? If so, then please tell us here all about your experience(s)! After all, this era was supposed to be the most legendary era in the history of gaming, both competitive AND non-competitive!

Are you talking about the game Infamous?

Oops, I should've clarified. What I meant is that there was a LOT of friction between the game companies Nintendo, Sega, Sony, and Microsoft. Plus during the era there were some bright AND dark times. That's what I meant by famous/infamous, not the literal game title.

I still find it confusing. Sorry.

Your too young to remember the "bit era". It took place mainly in the 80's-90's and was probably the time period where most of the advancements in the graphics dept. took place. 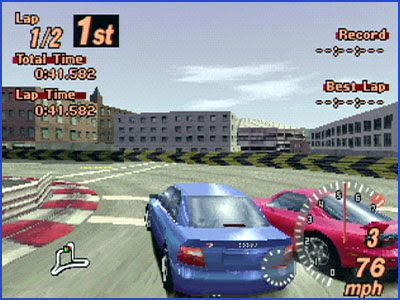 In a little over 10 years, not to mention the advancements in the size of memory as well as developing.

Dang, you sure know your gaming history! By the way, what did you think of the intense rivalry Nintendo and Sega had back then?

Anyone have a Magnavox as a kid? (Raises hand)... my first home console predated 8-bit. It was awesome. Black and White awesome. Sadly... burned in a fire.

The bit wars were awesome. Every four or five years or so, we'd upgrade consoles. We went through a hell of a lot of them... (as kids, us cousins lived close to each other... and often spent the weekend at the house of whoever had the newest system)... the Magnavox, three or four Ataris, the Colecovision (one of the best of its time), the Commodore 64, a bunch of early Apples (for Lode Runner, Quetzlcoatl, DigDug and other cool stuff), the Nintendo Famicom and the NES (we even had cartridge swappers for both systems, so we could bring games over to each others' houses)... the Sega Genesis, the Super NES... fun times... fun times...

SEGA was great... but they didn't have the marketing clout of Nintendo. Shame. The SEGA systems always had better ergonomics, great games (their fighters and platformers were superior, IMHO... only the Mario series was overwhelmingly better than Sega's offerings) and good design.

It's just Nintendo had great marketing clout, both with gamers and developers... something, I think, that Sony later learned from with the Playstation... build a lot of them, offer a ton of games, and the sales will come.

Unfortunately, the only reminders I have of the bit wars era is the Sega Genesis (with CD accessory) and the Dreamcast.

Other than that, I agree that the "bit wars" was the best era hands down.

After all, it pushed a LOT of competition out of the companies. But I feel that when they created the PS2 then I could tell, "Nintendo AND Sega are doomed!"

Because that was a popular system Sony felt pretty good being on top. After all, they had the ONLY system that could play dvd's and music! To be honest though, I didn't see the big deal about that. I mean, so what? So the ps2 could play DVD's!

Big deal, because at the time I STILL thought that the Gamecube was the coolest system! After all, it could play games from ALL of the gameboy consoles! You agree with me right?👍👍

This thread's going to become a zombie thread isn't it? Oh well, I don't blame you. After all, there never was a lot to say of the bit wars era. After all, I was only able to recount it because I was trying to see if the thought of the bit wars truly died from all gamer's thoughts. After all, I felt that the Bit Wars was an important part of any gamer's history, as it tells of how the systems we have now came to be.
G

i remember the n64 coming out when no other console manufactuer brought out a 64 bit console.

I remember it well. I owned a Megadrive, and many of my pals had a Super-Nintento. While the SNES could do all sorts of clever stuff with graphics, the Megadrive had a faster CPU, and such could throw things around the screen better. That's why Sonic the Hedgehog could never have been done one the SNES. I used to read in Nintendo mags how Mario had "over 90 levels, while Sonic only had a handful". I wanted to write in and tell them that I thought Mario was as dull and annoying as hell. I still do.

Nintendo thought they could win by making the N64, sadly the "bit war had ended with the Playstation and nin never regained that console dominance...... 1024-bits could not have been enough for a cartridge based system... Jaguar was not really 64-bit and had so many processors it was a mess. So it ended with the N64. There was no bit war in the 80's and there was nothing legendary about it, more embarrassing.