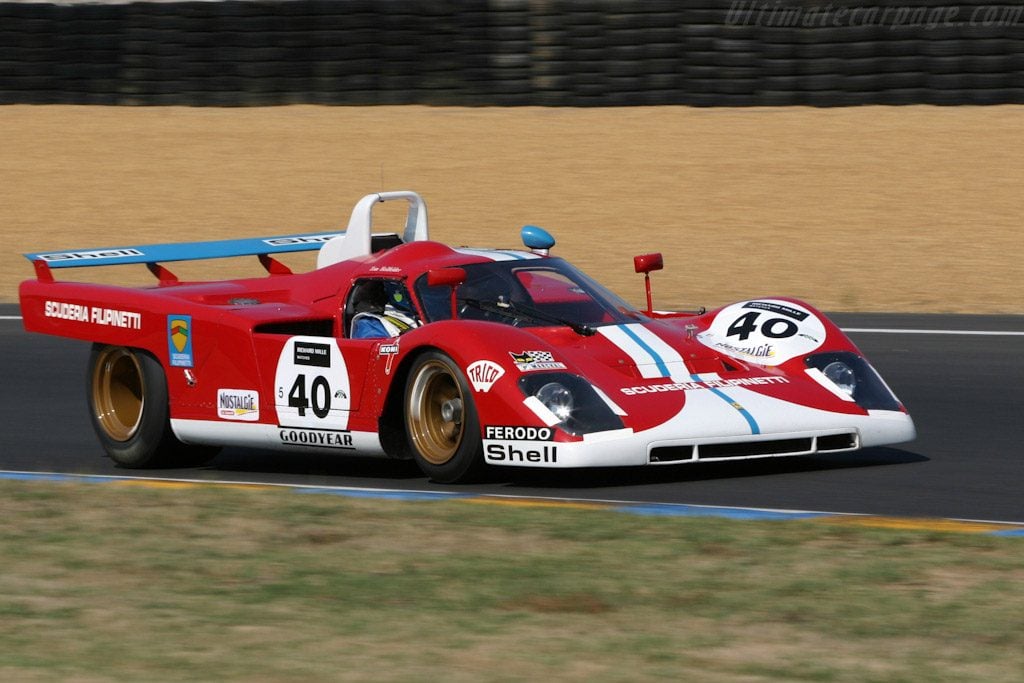 In an attempt to produce the most competitive sportscar possible, Ferrari jumped back and forth between the two classes set after the 1968 rule changes by the sport's governing body. Prototypes were restricted by a three-litre displacement limit and a new class of limited production GT cars with a maximum displacement of five litres was created. To be homologated for the GT-class at least 50 examples needed to be constructed, but from 1969 that number was reduced to 25. With the three litre Formula 1 V12 engine available, Ferrari's choice to produce a prototype racer was fully understandable.

The new 312 P was ready for the 1969 season opener at Daytona, where it scored the pole position and finished first in its class. Although the 312 P proved quick straight out of the box, it was abandoned after Porsche debuted the 917 at Le Mans in June of that year. Quick in practice, the 917 proved horribly underdeveloped with fatal consequences on the first lap of the race. The 917's pace did however convince Ferrari to build a new GT racer of their own.

Unlike Porsche, whose initial 917 engine displaced around 4.5 litres, Ferrari decided to exploit the rules to the maximum and started work on a brand new 5 litre engine midway through 1969. With four valves per cylinder, quad cams and a Lucas Fuel Injection system, the new Type 261 engine followed the design of the team's Formula 1 engines closely. For reliability reasons, the engine was not as highly tuned as the F1 units, but with 550 bhp available, it was no slouch. Modifications were carried through on the engine and at the end of its career it produced well over 600 bhp.

The chassis was made up of an aluminium spaceframe front section and a rear subframe to support the engine and the rear suspension. It was essentially a development of the 312 P chassis, with modifications made to carry the larger engine and to qualify for the GT-class. GT requirements included the addition of a spare wheel and a different windscreen. The fiberglass body's round shape was reminiscent of the 312 it replaced. At its debut, the package weighed 880 kg, which was substantially more than its more powerful, air-cooled rival from Stuttgart.

Poor weather dogged the new 512 S' testing all through the winter, with the team rarely finding a dry piece of track. Testing was more important than ever, as the half year development gap with Porsche had to be covered before the Daytona 24 Hours season opener in January 1970. When Mario Andretti drove the first bit of dry track at the Daytona test week, he clocked a time less than one second adrift from the Porsches. The speed was clearly there, only one problem remained; homologation. On the morning of the deadline, Ferrari presented 17 completed examples and parts for the remaining 8 cars.


Five hours after the homologation inspection, five cars were on their way to Daytona. In head-to-head qualifying, the 512 S and the 917 were disturbed by unfavourable weather. Andretti benefited from the situation and placed his 512 S on the pole position in its debut race, just like the 312 P had done in the previous year. All five Ferraris that were entered suffered from problems throughout the race and only the Andretti car managed to finish, in a reasonable fifth. A suspension failure had thrown it back from a seemingly secure second place. Carefully driven around the track, it was overtaken by one of the 917s in the second-last lap.

Ferrari probably learned more about the 512 in those 24 Hours at Daytona than they did in the previous two months of testing. The Ferrari almost made up in handling what it lacked in the power and weight department. Improving aerodynamics and fuel consumption were also on designer Forghieri's to-do list. An open spyder version shaved off around 25 kg, but it was not preferred by all drivers, especially in rainy conditions. Small lips were added on each side of the nose to increase downforce. Improved Fuel Injection brought the V12 engine up to Porsche power and fuel efficiency.

Four revised 512s faced four 917s for the next championship race at Sebring. Three of the four Ferraris featured spyder bodywork, with the Daytona finishing car still in its initial configuration. Showing his talents once more, Andretti qualified his 512 S on pole, followed by the seven remaining 'GT-cars'. From the start Andretti lead the field, only to be overtaken by three of the Porsches during a pit stop. This proved to be a short-lived as all three Porsches were overtaken after suffering various problems of their own, leaving the four Ferraris to lead the race. After a few more lead changes Andretti managed to overtake one of the 917s and the leading Porsche 908, to record the 512's maiden victory.

The championship now moved to Europe for five more races before the season's pinnacle, the 24 Hours of Le Mans. Forghieri was keen on developing the car further, but was limited due to homologation restrictions. Reliability was incredible in those five races, with just one retirement from 17 starts. Unfortunately none of the finishes resulted in wins, but there were podium finishes none-the-less including a 2-3-4 finish behind a single 917 at the Monza 1000 km. The 512's handling was underlined by a third place finish at the Targa Florio, a track that favoured the nimble 3 litre prototypes.

Le Mans was the most important race of the season for Porsche. A Le Mans win would complete an arduous 20 year racing effort. More than on any other track, the car's top speed at Le Mans is crucial. Both Ferrari and Porsche produced special longtail versions which created less downforce, but in turn gave less drag for higher top speeds. Ferrari fielded four longtail works racers, but Porsche's leading JWA (Gulf) team was reluctant to switch to the longtail variant because of testing accidents. Again the Ferrari's were substantially heavier than both the regular 917 and the long tail versions.

Qualifying showed that the 512 S' 100 additional kilos were no real handicap as Vacarella recorded a lap time of just 0.3s behind pole sitter Elford in his longtail 917. Finishing had been Ferrari's strong point throughout the European season, but that quite abruptly ended at Le Mans. Vacarella's car lasted just 30 minutes. When rain began to slick the track shortly after, two of the remaining works cars fell victim of a multiple car mishap. Jackie Ickx took the lead in the remaining works 512 S, but around 2:00 am he hit a puddle and crashed out, killing a marshal in the process. Porsche finally won their Le Mans. The 1970 Le Mans was the only running of the race where works Ferraris and Porsches battled for victory; the end, and beginning of two eras.

Now with the stress of Le Mans behind them, the Forghieri led development team started to work on a slimmed down and more powerful version of the 512 S. Dubbed 512 M (for Modificato or Modified), the revised car now produced 620 bhp and weighed in at only 815 kg, compared to the 512 S Spyder's 856 kg. A 'sharper' wedge-shaped nose was fitted and a large airbox was mounted on top of the engine to force air into the intake-trumpets. Further modifications included new rear bodywork and the spyder option was no longer available. The 'M-package' was far from cheap, but about 15 of the 25 512s were updated.

The 512 M prototype made its debut at the final race of the 1970 championship in Austria. Throughout qualification the Ickx/Giunti driven car suffered from fuel-feed problems, but still matched most of the 917s. With full tanks, and alleviated fuel-feed problems, Ickx beat the 917's pole time in the opening laps of the race. He continued to break the lap record and eventually beat his own Formula 1 lap record set two months earlier. For the first time that season, the Porsches were outpaced and by quite a margin. Unfortunately, alternator problems ended the race for Ickx and Giunti, but they had clearly proven that the development gap was finally closed.

Ickx and Giunti took the 512 M down to Kyalami for a non-championship 1000 km race. The only other works car was the Porsche 917K, driven by the newly crowned world champion Siffert and runner up Ahrens. The dominance of the 512 M was incredible; easily taking the pole from the best car Porsche had to offer. A one-minute penalty issued because of a false start did not discourage the team and after 1000 km Ickx and Giunti crossed the finish line, two laps ahead of the Porsche.

Things looked very bright in the 1971 season for the Maranello based team. Ferrari had some very different plans for that year and decided to focus on a 3-litre prototype program again. Most of the world championship rounds favoured the smaller prototypes and Ferrari feared the increased competition from Matra and Alfa Romeo. The works team concentrated on the new 312 P (B) prototype and left the 512 Ms to be run by customer teams. None of these could match the preparation and development of the Porsche works backed team and, although it was a superior machine, the 512 M was never a true force in 1971.

When the 5-litre class was abandoned for 1972, the career of both the 512 and 917 was effectively over. The two cars are forever connected and in conversations one is rarely mentioned without the other. Ferrari proved its choice to focus on the 312 PB to be right one, by winning the 1972 and 1973 world championships.
https://www.ultimatecarpage.com/car/151/Ferrari-512-F.html​
SPECIFICATIONS 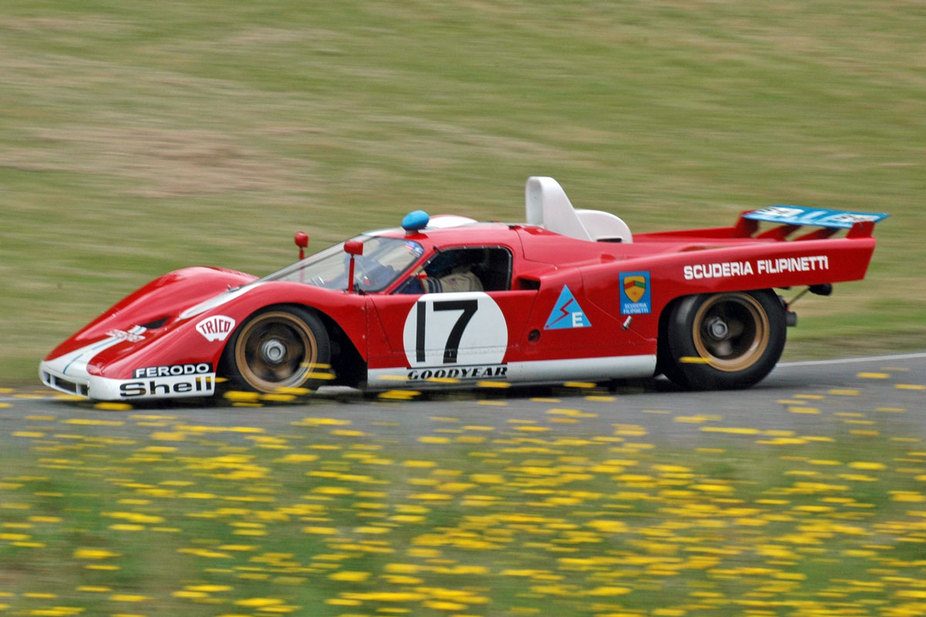 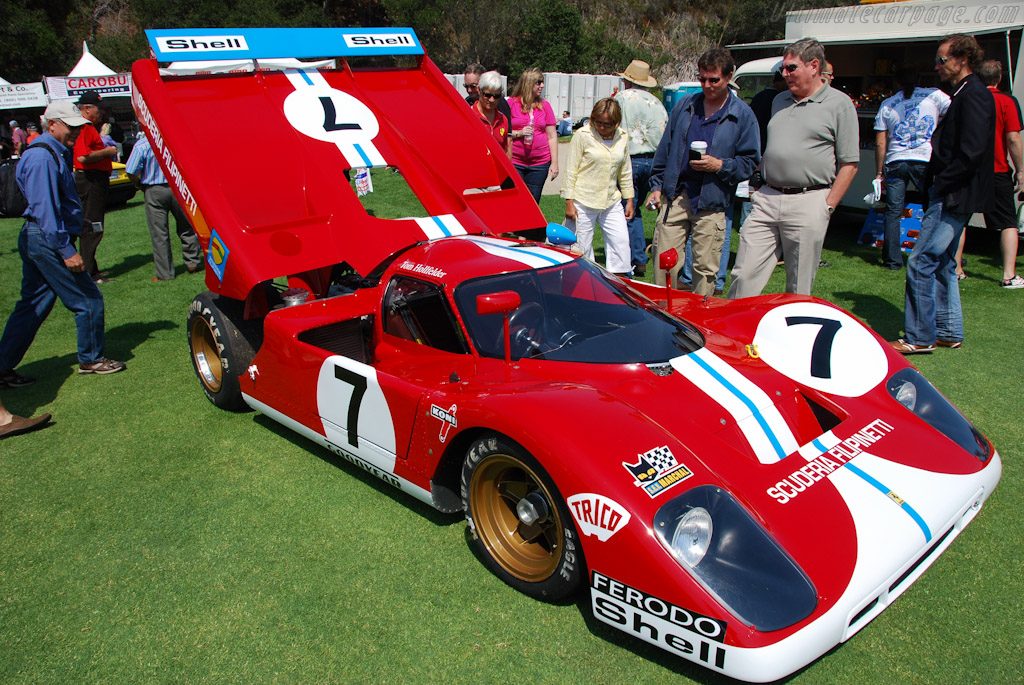 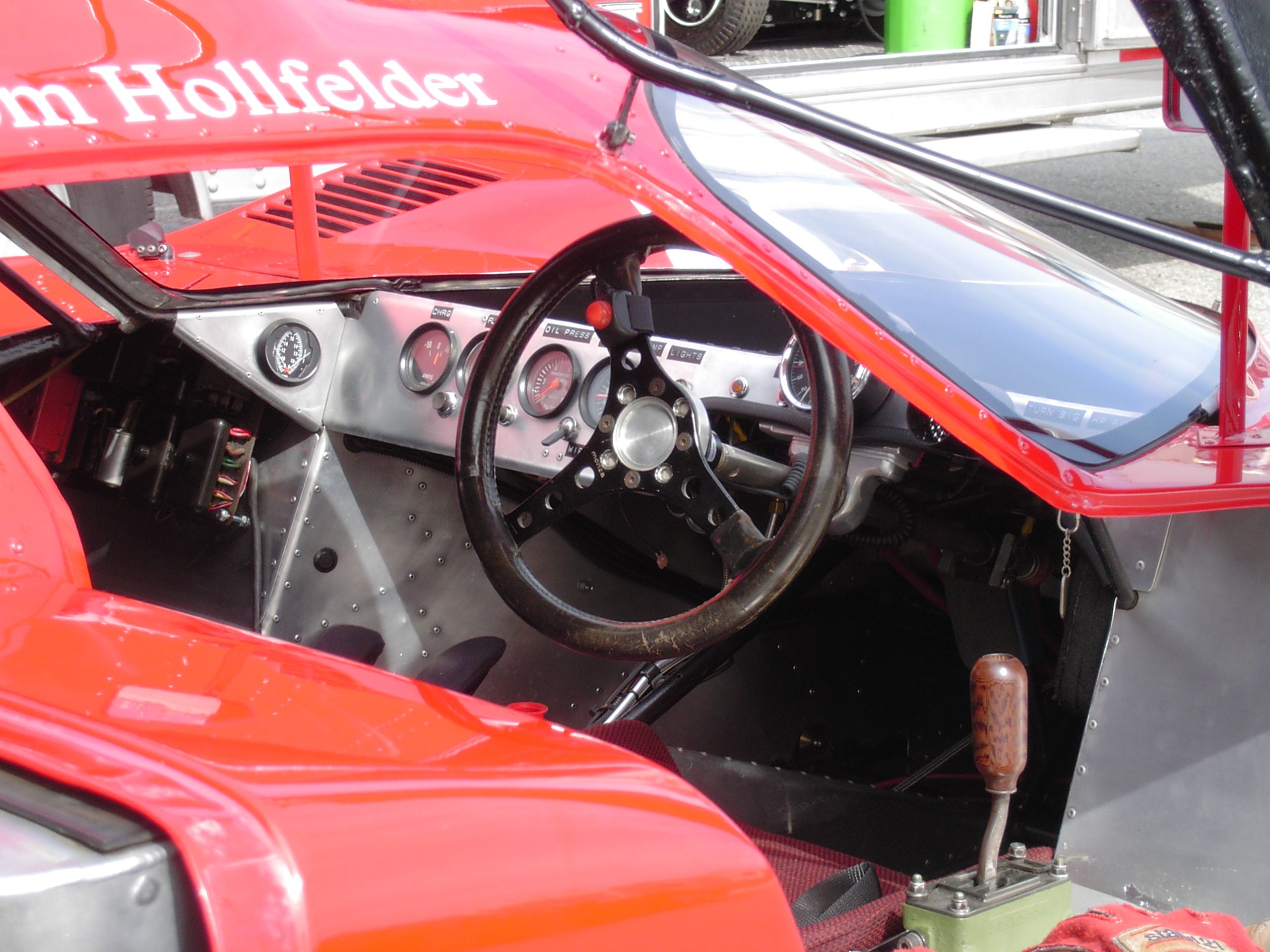