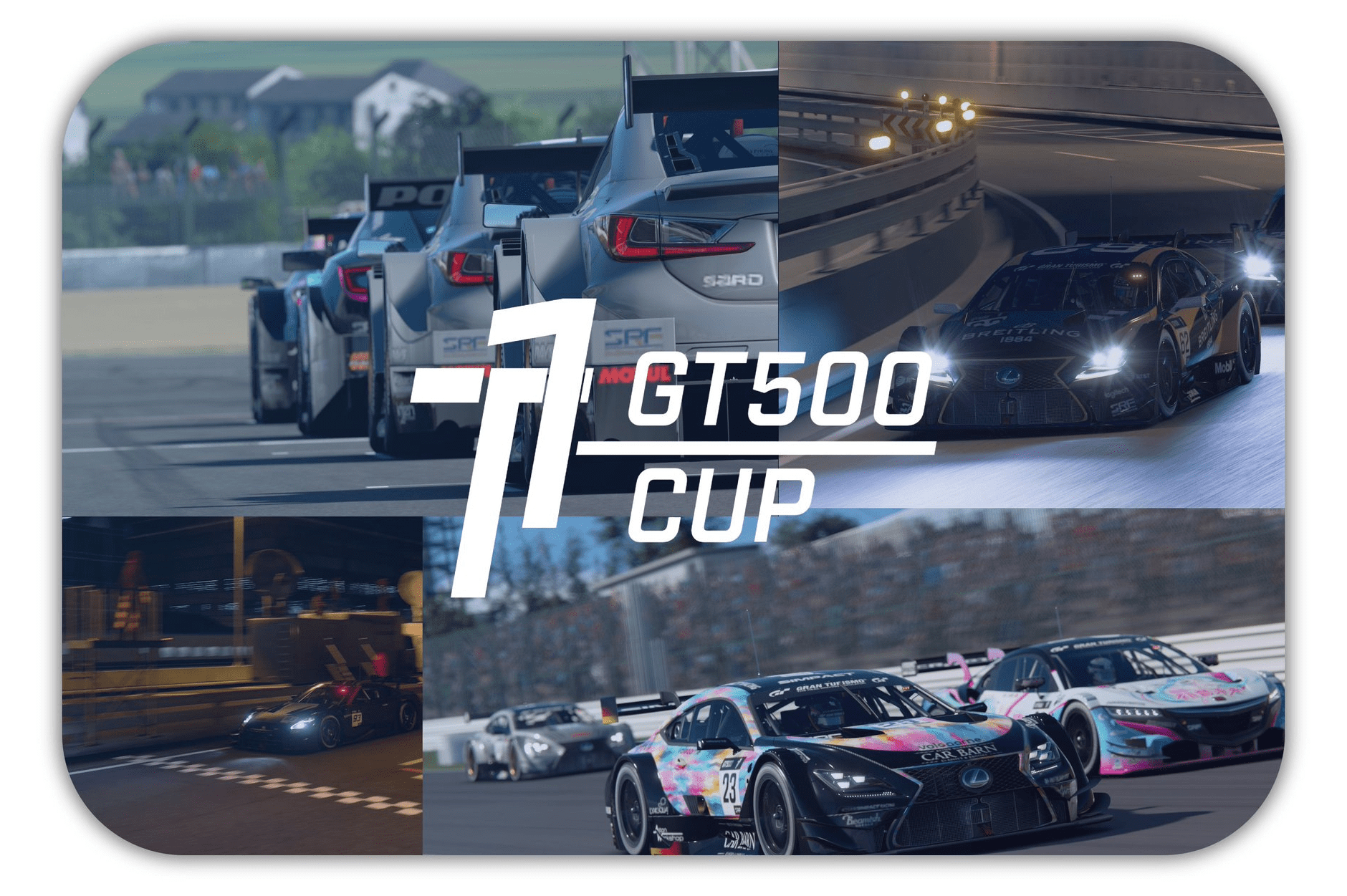 ​
This season has concluded. GT500 will return in 2021.​
The Turn One GT500 Cup is an 8-race weekly series using the Gr.2 GT500 cars in Gran Turismo Sport (PS4), competing in races across different circuits in game. The series has two championships: the Drivers Championship, where drivers compete to score the highest amount of points in the season and the Teams Championship, where drivers pair up in teams, and the pair that scores the most points wins the championship. A maximum of 7 teams of 2 drivers can enter.​
Drivers Championship:

Drivers
Team
A driver can register as a reserve, to substitute a driver if he/she misses a race. To register as a reserve:
Points that a reserve scores are credited to him/her in the Drivers championship, and for the team he/she is driving for in the Teams championship.
Teams:
Team Simpact Racing Nissan
Team Simpact Racing Honda
Turn One
Golden Bear Motorsport
Paradox Autoworks
Virtual Life Xperience

Drivers in a team can use different cars.

Maximum power: 650hp
Minimum weight: 907kg/2000lbs
Drivers must include the following elements in their liveries:
Download the required decals here. 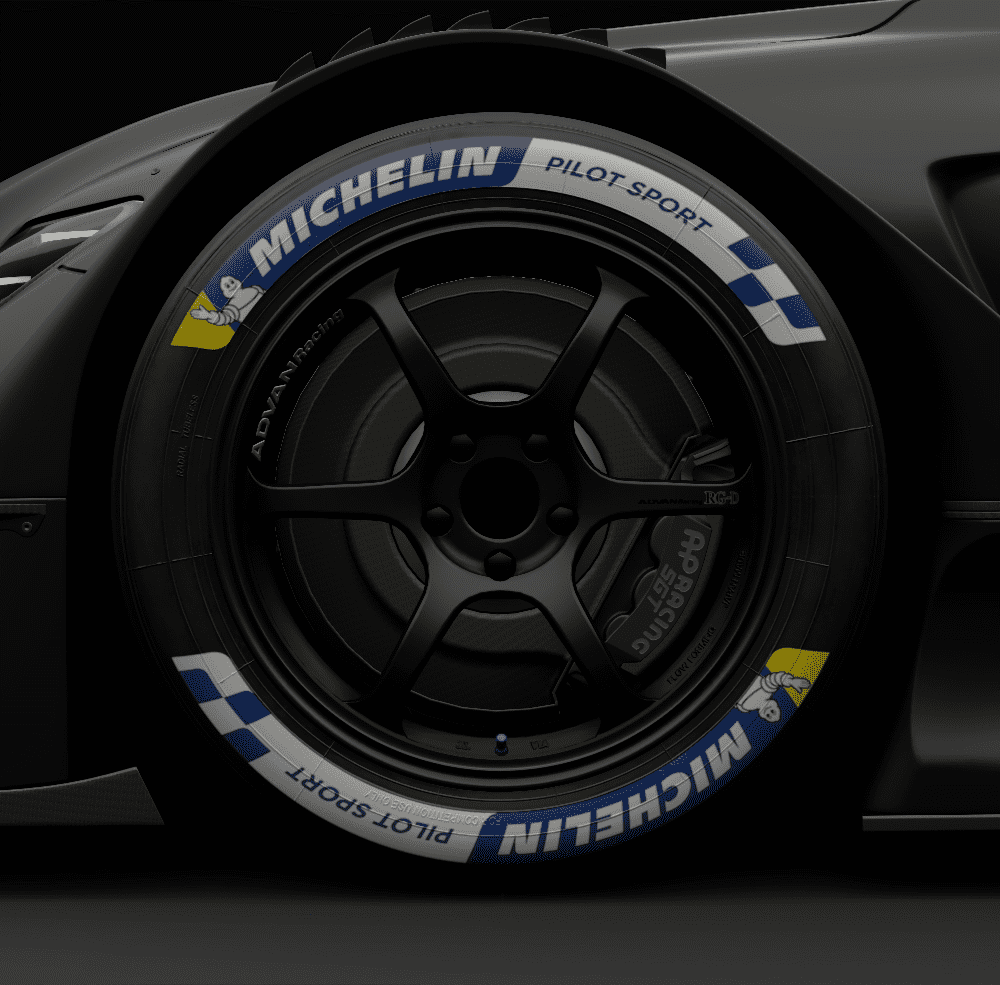 (You can also watch this video as a guide for making liveries)
Make sure that your main sponsor hasn't been taken by another team, the following sponsors have been taken by teams:

Races are held on Sundays.

You can use this time zone conversion tool to see when the races are held in your time zone.

WHAT IS THE STUCK CHECK? The stuck check is a simulated start before the Formation Lap. This procedure is implemented to make sure that nobody has problems getting off the line.
Shown below are the tracks, laps, weather, and in-game daytime setting.

Alongside the SRF rulebook, the GT500 series also uses their license tier system. The system works by earning/losing points on your license, determining your driver tier. All new drivers in the SRF start in the Amateur tier, with 35 points to start. Drivers earn points by finishing in higher positions and by racing cleanly, and lose points with unsportsmanlike behavior or incidents.

The series uses a system sometimes known as “first, second, third offense, etc.”, which means that penalties will be greater if a rule is broken several times. Example: Driver 1 missed one race without notifying the admins, and was given a warning. Later in the season he missed a race again without notifying the admins, and on this occasion was given a drive-through penalty.

Drivers will face post-race penalties awarded by the Stewards in case of them causing an incident. Incidents that occur during Qualifying or the race can be reported to the Stewards, via a message presenting the report like shown in the example below:

Description: Driver X left the track to overtake me and forced me off the track. He then went for a divebomb on Drivers Y and Z, crashing into both of them.

This format is used to simplify the process of finding the incident on replay.

The penalty awarded and how many penalty points are awarded is decided by the Stewards, depending on the severity of the incident and the amount of drivers affected.

Note: To serve a drive through penalty, the driver must go into the pits at the end of the first lap, without changing tires, refueling, or repairing the car.

This list does not cover all offenses that can be penalized. It is up to the Stewards whether an incident is penalized or not.
Points are given to the following finishing positions.

The top 5 finishing drivers are given extra weight ballast for the next 2 races. The ballast is given as follows.

1st: 5% extra
2nd: 4% extra
3rd: 3% extra
4th: 2% extra
5th: 1% extra
If a major incident occurs on track during the race, the Full Course Caution will be used. This procedure consists of the entire field lining up behind the race leader and driving at a reduced speed until the Race Director signals for the green flag.

Each circuit is assigned a Restart Zone, which is an area of the track in which a race can be restarted, with the leader deciding when to accelerate.

If a driver is involved in an incident and believes an FCC is necessary, he/she must type “VD” (which stands for vehicle damage) in the in-game chat. If multiple drivers send this message and/or show to have significant car damage, and/or the race director deems it necessary to call for an FCC, he will do so by typing “FCC” (standing for Full Course Caution) in the in-game chat. The race leader must then slow down to a maximum speed of 80mph/128kmh and allow the field to form up behind him/her. When the Race Director calls for the FCC to end, all drivers will continue driving in a line until they reach the circuit's Restart Zone, where the leader will choose when to accelerate. Overtaking is not allowed until the timing line is crossed.

The pitlane remains open for fuel, tire and/or repair pitstops during an FCC period.

If a driver drops down the order during an FCC period, be it for a spin, crash or another reason, they cannot return to their own position.

Drivers must maintain a minimum distance of one and a half (1.5) car lengths between each other.
Each circuit is assigned a Restart Zone, which is an area of the track in which a race can be restarted, with the leader deciding when to accelerate.

The in-game grid start option will be used, with the drivers driving in a single file for one lap, in the same way as in a Full Course Caution, following the leader. Once that lap is concluded, the green flag waves and the race begins. Each circuit is assigned a Restart Zone, and the leader can choose to speed up at any moment inside this Zone. Overtaking is not allowed until the timing line is crossed.

The maximum speed allowed in the Formation Lap is 80mph/128kmh.

If a driver drops down the order during an FL period, be it for a spin, crash or another reason, they cannot return to their own position.

Drivers must maintain a minimum distance of one and a half (1.5) car lengths between each other.
If a server disconnect occurs, drivers and staff will attempt to restart the race in the running order before the disconnect to complete the remaining laps. The red flag restart begins with one lap under Formation Lap conditions. After that lap, the remaining laps are raced. 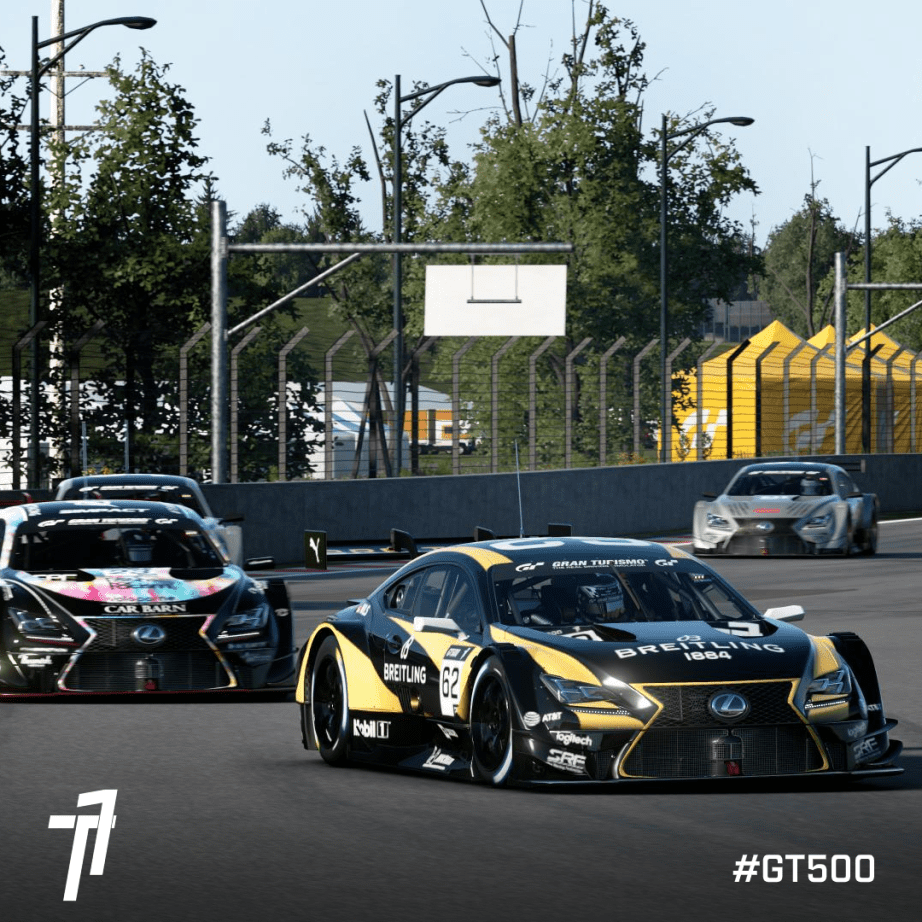 We've seen some fantastic livery designs from the teams of Season 1, who's ready to see what they have in store for us in Season 2?

At the race weekend in Autopolis (October 11th), drivers and teams will be able to create special liveries for that particular race! Livery week is an opportunity for drivers to create new designs and showcase them to others.

The results from Round 1! 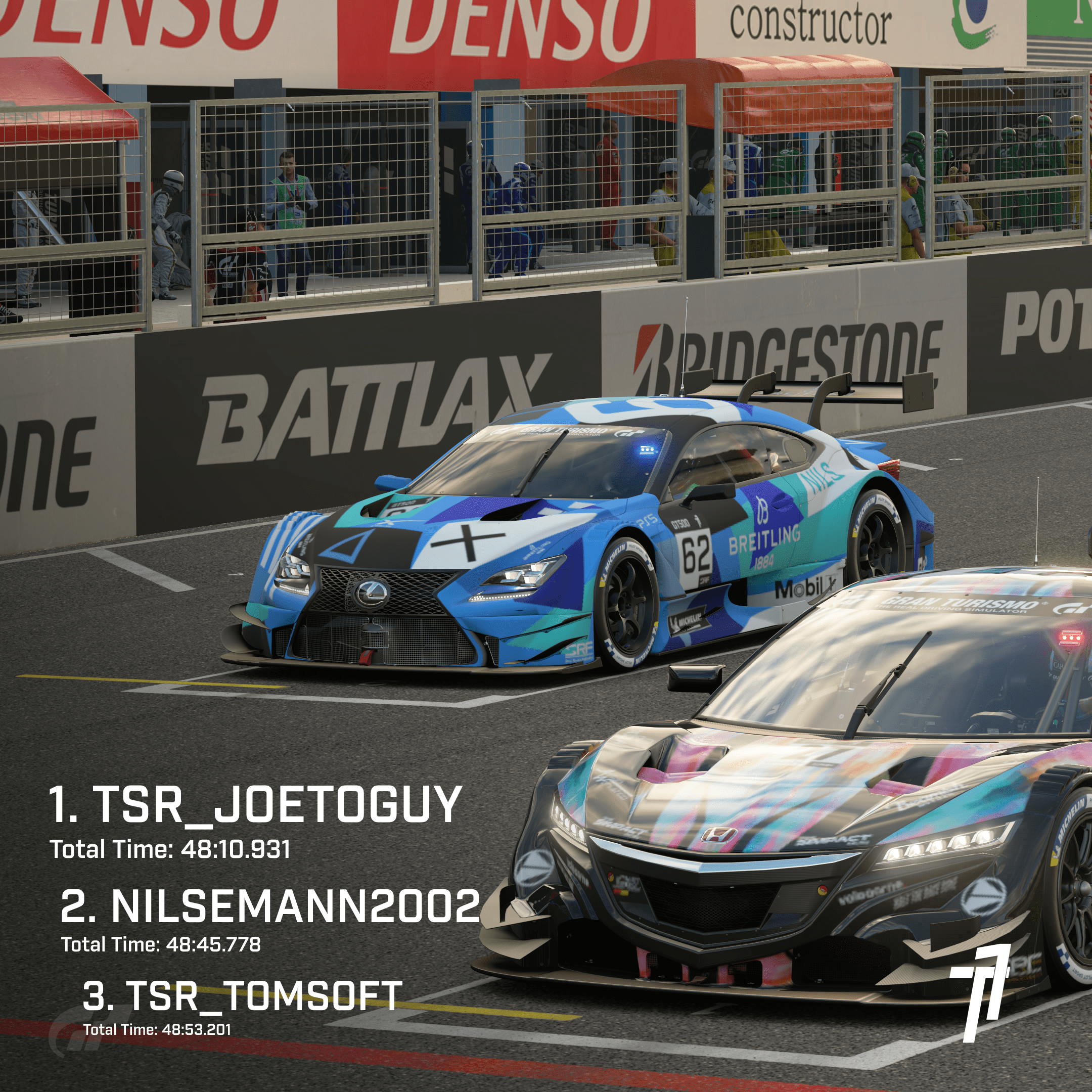 Some images from Round 1: 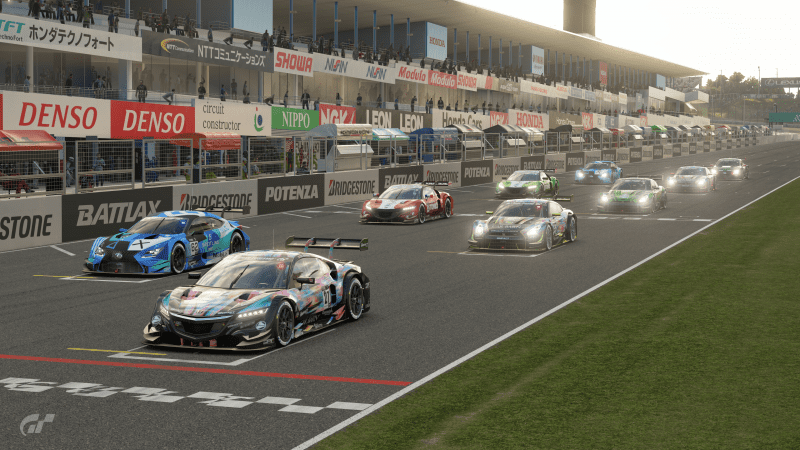 The grid right before the start of the formation lap. 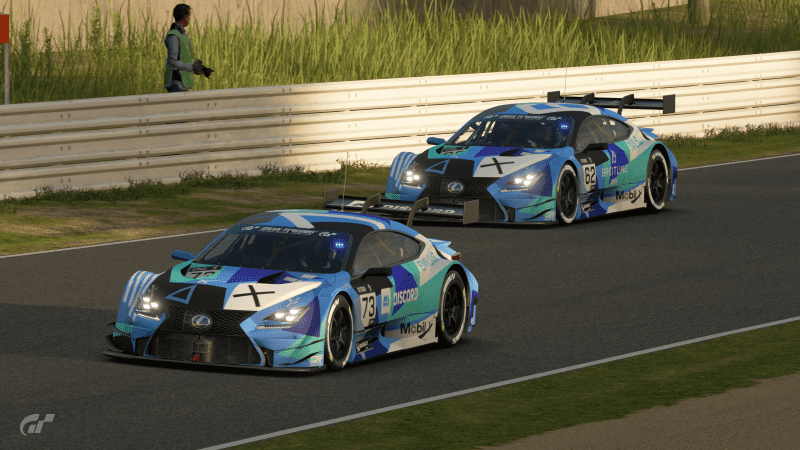 Turn One teammates Emilius73 and Nilsemann2002 on the entry to the hairpin at Suzuka. 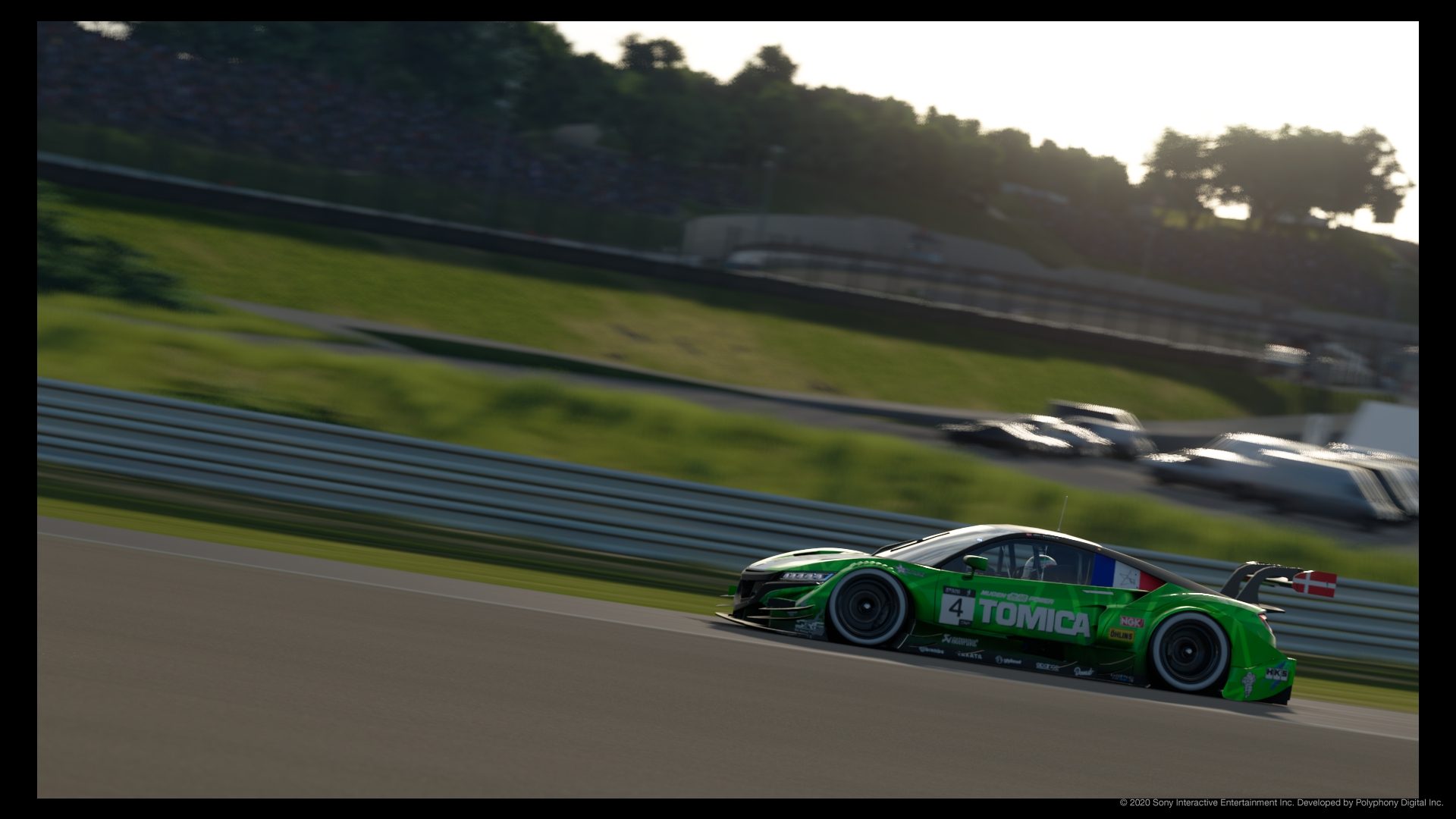 Paradox Autoworks driver de-luck4 in the first corner of the circuit. 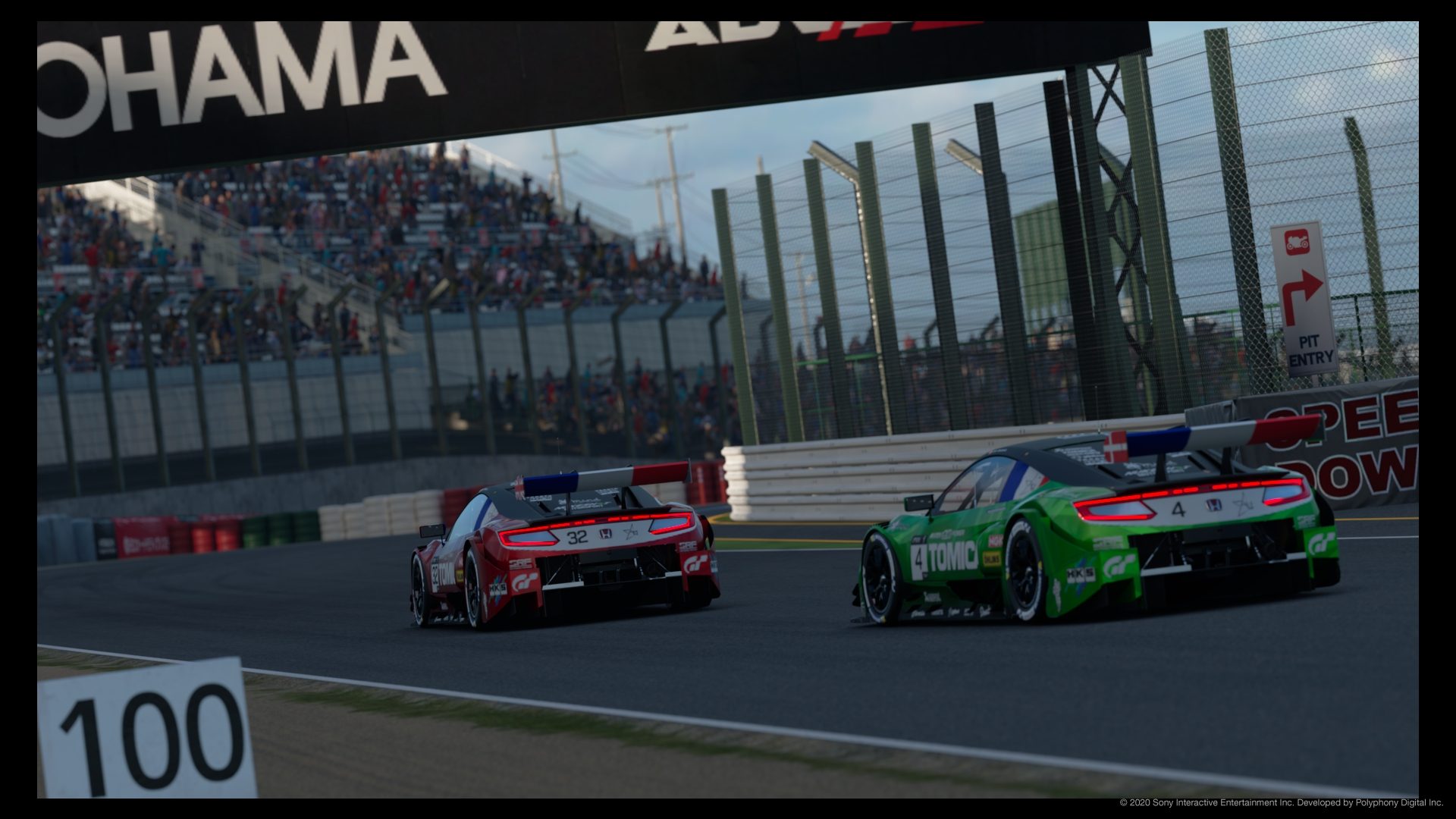 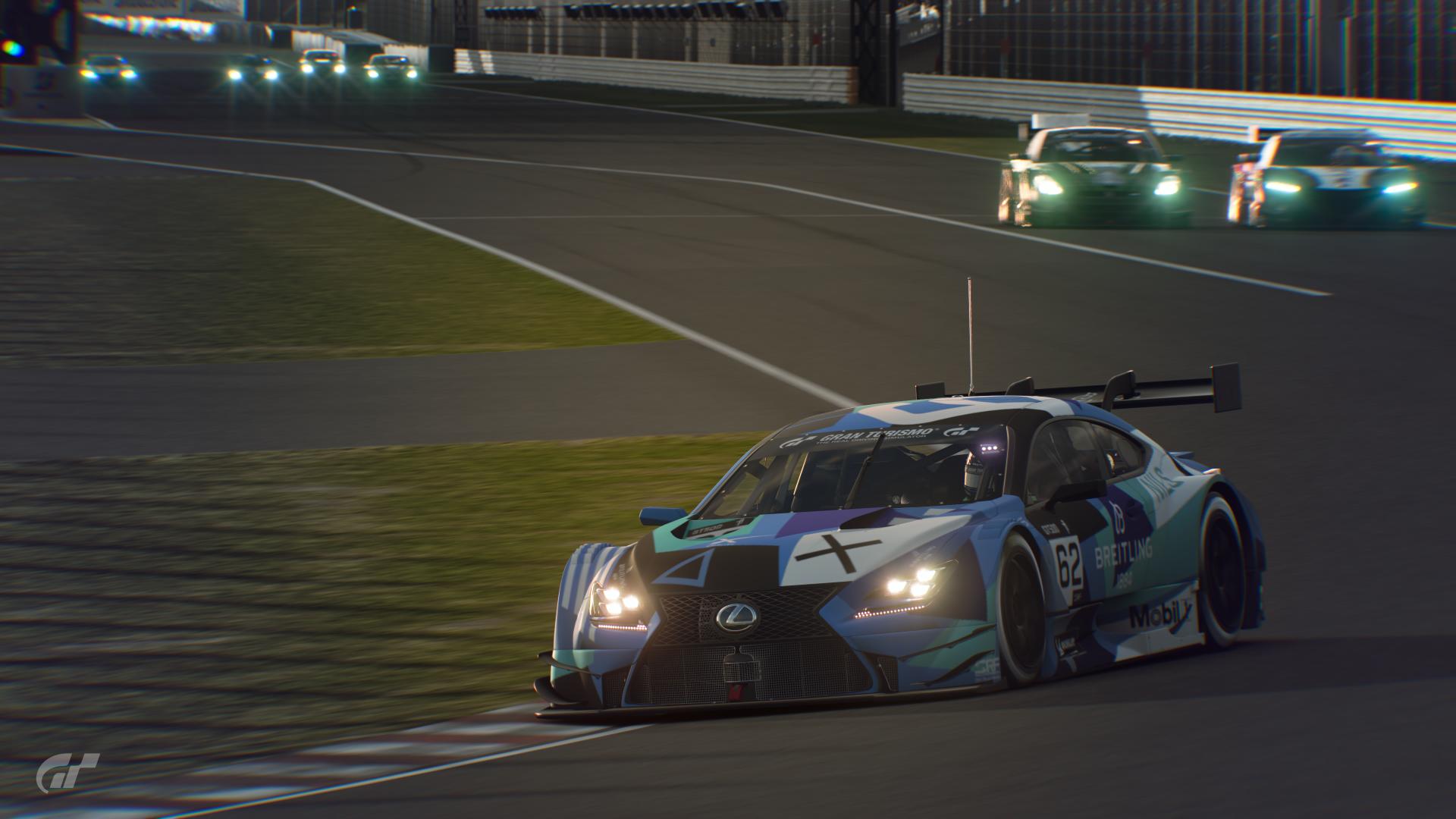 Updated results from Round 4: 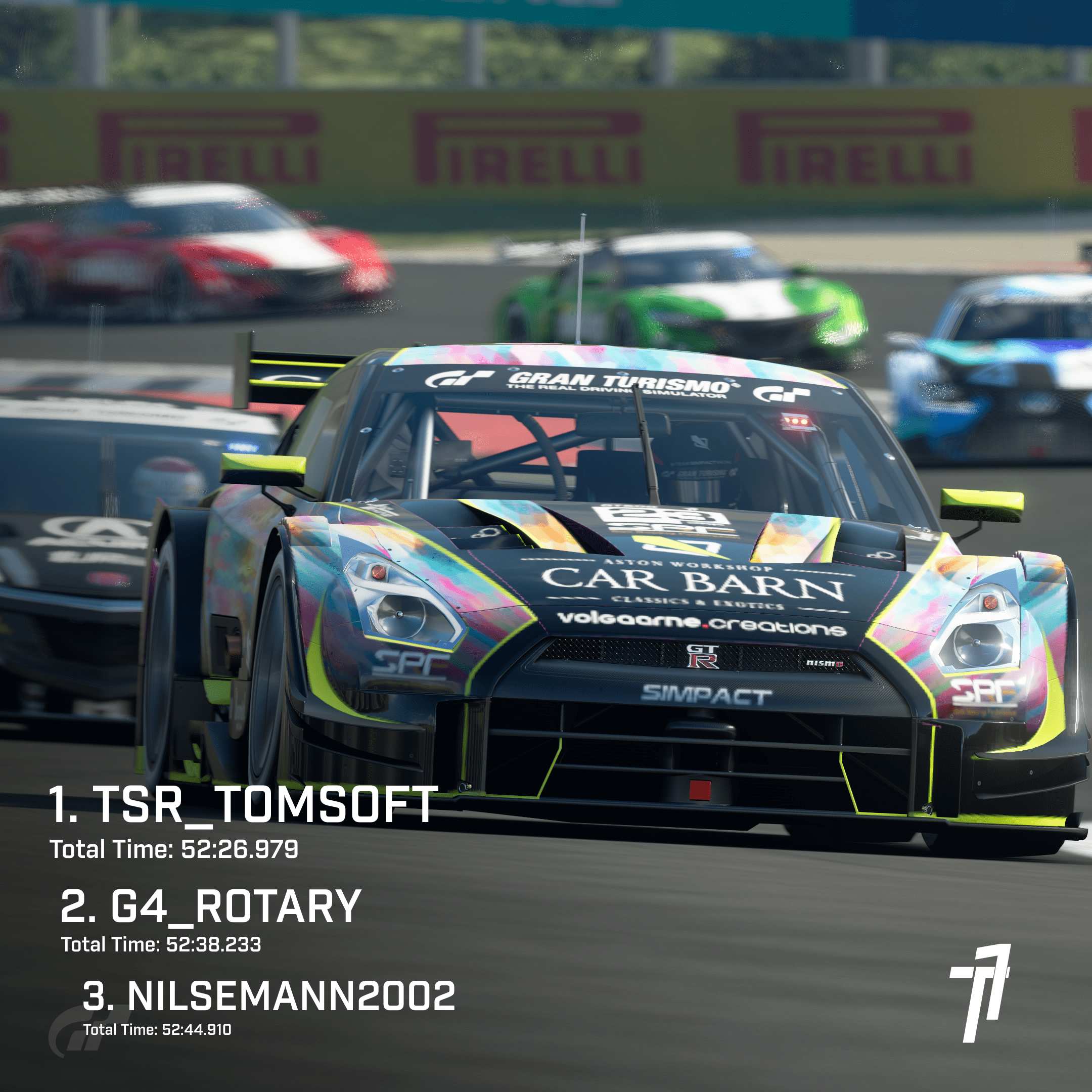