In Gran Turismo 4, the Full Custom transmission doesn't give you an estimated top speed when adjusting the gear ratios. Therefore, using an external calculator becomes essential.

However, it's not possible to find a car's tire size within the game. But, using this here formula, you can.

It's a little overkill to use that many decimals, you just really need 3 significant figures in this case since (a) you're not interested in knowing exactly to the picometre what your top speed will be and (b) you can't really read the speed nor the RPM to higher precision than about three significant figures anyways. 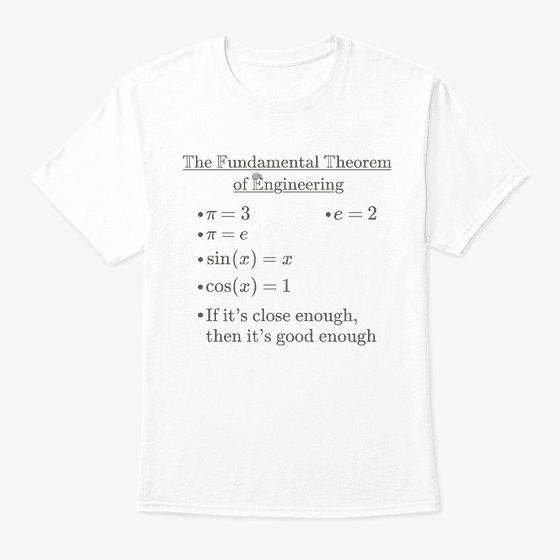 Also I think the formula would benefit from being written as a multiplication instead of a string of divisions:

Code:
In my opinion it's easier to read it that way.


Code:
You should also write what the dimension (radius or diameter?) and unit (meters or inches?) of the wheel size is.

Another approach could be to get rid of the x entirely (it's basically a "magic number", hard to work out where it comes from) and instead write the formula as a set of equations. This way it's easier to figure out where everything comes from and check that the formula is correct. Here's an example with four equations for calculating the wheel radius: 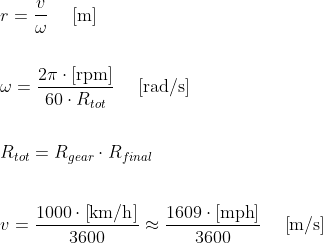 The first equation gives the basic relationship between the radius of the wheel, the angular velocity of the wheel and the speed of the wheel.

The second equation provides a way to calculate the angular velocity of the wheel based on the engine rpm and the total gear ratio.

The third equation states that the total gear ratio is equal to the gear ratio multiplied by the final drive ratio.

The fourth equation converts the wheel speed from km/h or mph to m/s.
Last edited: Jul 17, 2021

A few years ago I cobbled together something related to this matter...

Tire sizes, although not stated, are diameters in inches (with decimal fractions).

In real real life, dynamic changes in tire size would need to be considered as the tire's real effective diameter changes with the rotational speed. I do not attempt that at all. (Not to mention slippage). (Of course, in our case, the closer our modeling matches Gran Turismo, rather than real life, the better).

RPM has units, as does "mph". And the other two parameters are unit-less ratios. (Expressed according to Gran Turismo conventions).