Since I'm unable to keep a vehicle for more than two years, it was about that time I got something new. However, unlike the last few times I've considered a new vehicle, I really wasn't planning on this one. A few people know that I'm moving from Utah to Michigan in a couple of months. The initial plan was to get a shipping container for our stuff, have my wife and son fly to Michigan while I sold my wife's vehicle, and then drive the Volvo across the country. That was looking good, but then fuel prices went from adequate to outrageous and it doubled the price of the shipping container. I wasn't going to spend nearly $5,000 to ship stuff that isn't even worth $5,000 across the country. I didn't want to sell the stuff though because I do like some of the furniture and whatnot we do have.

So a new plan was in order and after doing a bunch of math, it actually made some amount of sense to rent a U-Haul trailer and just drive across the country. It's not exactly something I wanted to do with a 3-year-old, but whatever, I'd rather spend $2,000 on fuel and a trailer rental vs. $7,000 on a shipping container and airline tickets. Unfortunately, this is like the worst possible time to buy a vehicle, everything is either vastly overpriced or just doesn't exist. Case-in-point, I originally wanted a 4Runner TRD Off-Road, but there were like two in northern Utah that didn't have an obscene amount of miles on them. One sold before I could look at it and the other choked me it smelled so bad of cigarette smoke.

A 4Runner wasn't my first option though, I really wanted a Chevy Colorado ZR2 or a Ford Ranger, however, both of those weren't big enough on the inside. I also looked at a couple of full-sized pick-ups but I couldn't justify spending nearly $50k on a used vehicle with over 60,000 miles on it and fairly devoid of options. There were also very few certified preowned vehicles floating around too and I ideally wanted that.

After going to a couple of dealers, I landed at one about an hour away on a whim because when I searched AutoTrader then had a 4Runner with a sunroof. The only knocks against it were that it was red and was an SR5, but I figured I could probably live with that if the deal was good. Fortunately, the deal was good. They gave me a hefty sum for my trade-in plus worked with me on the numbers a bit leaving the 4Runner ultimately like $39k and some change, about $5k less than other dealers. Best of all it was certified too plus just had new brakes and suspension bushings installed. The dealer also cut me a really good deal on the extended warranty. I don't think I really needed it, but it's now under warranty until 2030 or 150k miles. Guess I'm keeping this one for a bit.

Anyway, long story short, it's a 2020 SR5 Premium in Barcelona Red with the black TRD Pro wheels. It's pretty much loaded for the trim with a sunroof, heated seats, adaptive cruise control, fake leather seats, and NAV. It also has an aftermarket trans cooler installed too, which I liked since I'll be towing.

I hate the tires that are on it and I'll be getting something a bit more off-road focuses here pretty soon. The glare from the sun is also pretty bad off the hood, but a guy I work with does decal work on the side so he's getting that sorted for me. I'm sure I'll do a couple more things to it as well. It does need rock sliders since my wife has a difficult time getting in and out of it and once I can find a TRD Pro grill available, that'll be going on as well, they're just sold out everywhere for the 2020+ models right now. Probably next summer, I'll get a rooftop tent for family camping trips since Michigan will be good for that. Also, since I can't leave well enough alone, it'll likely get a lift at some point so I can stuff 33's under it. 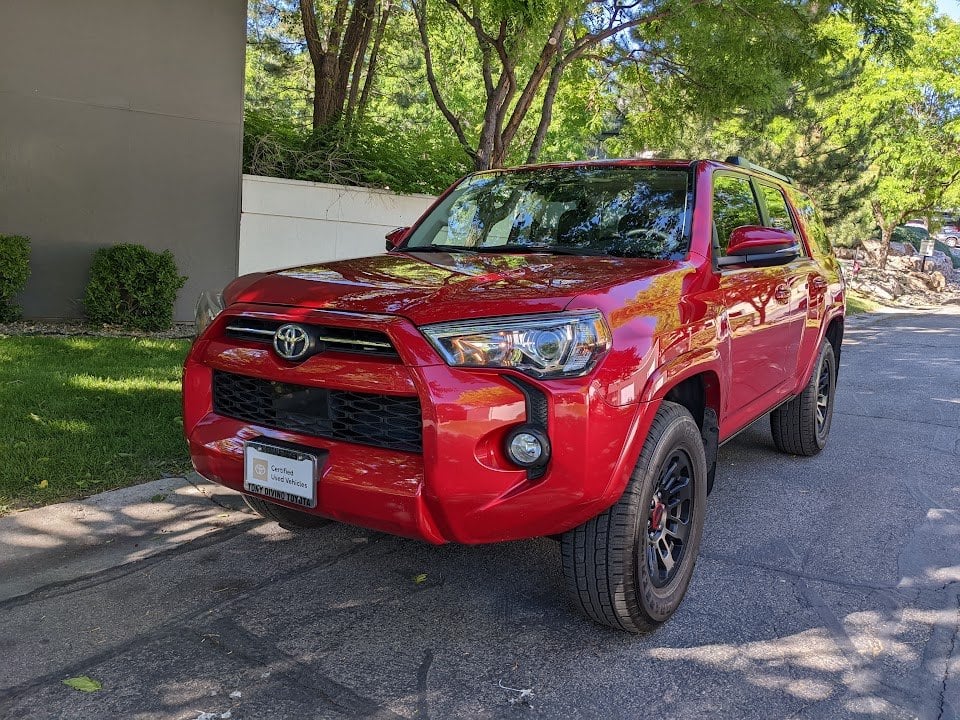 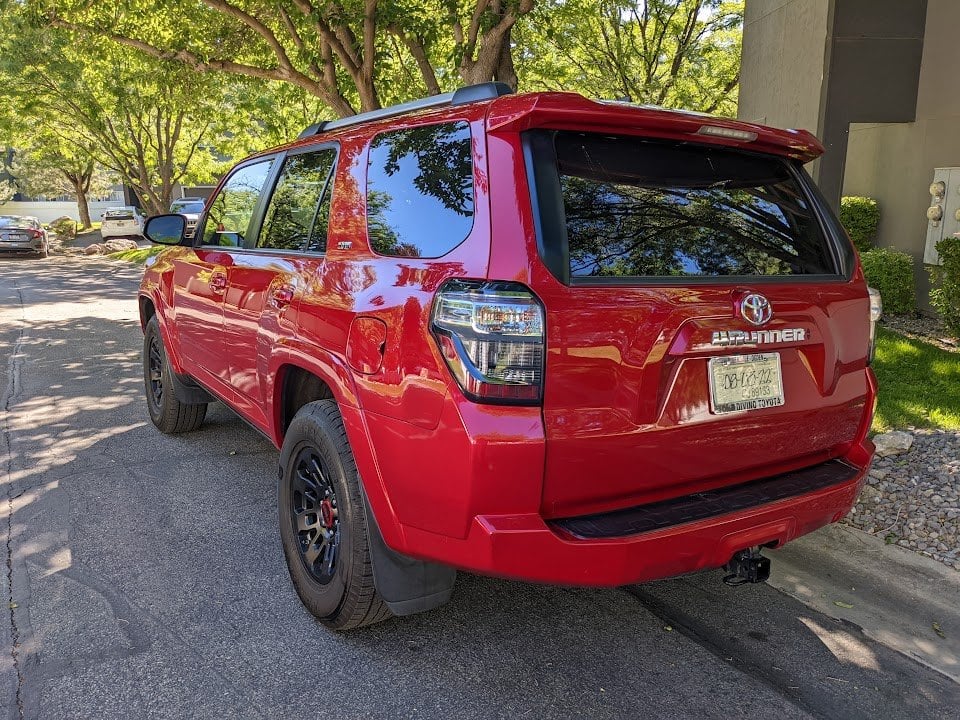 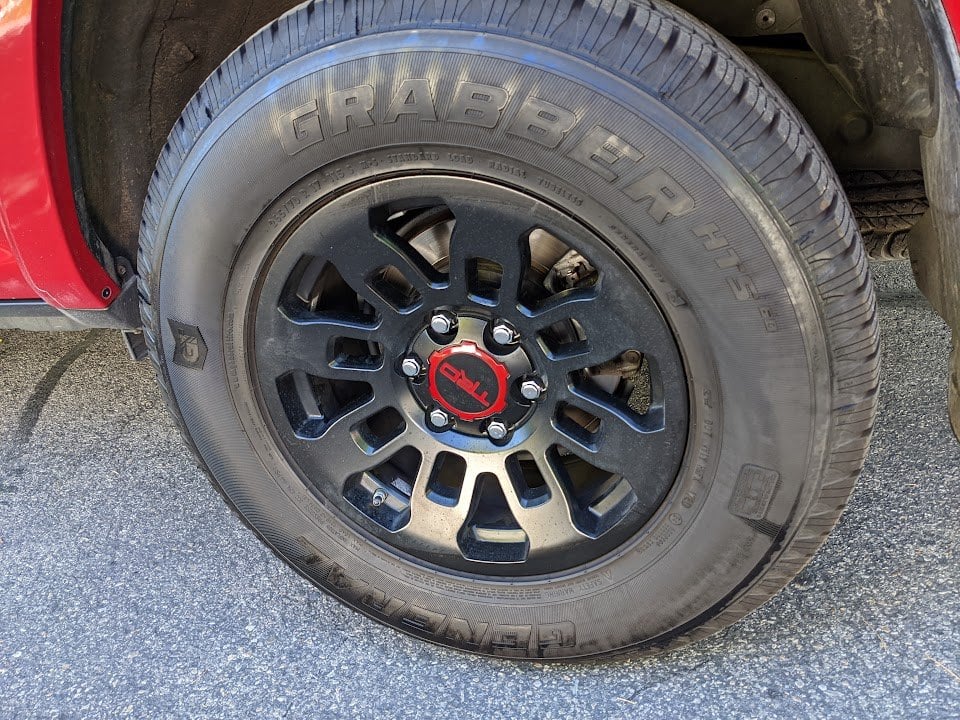 Love the Barcelona Red on it! The warranty will at least save you any costly troubles in the future, not that it should give you any. Any plans for the headlights? If I recall correctly the stock beams weren't exactly the best. The TRD grill would go great with the red, a little more black to break up the color.

MedigoFlame
Love the Barcelona Red on it! The warranty will at least save you any costly troubles in the future, not that it should give you any. Any plans for the headlights? If I recall correctly the stock beams weren't exactly the best. The TRD grill would go great with the red, a little more black to break up the color.
Click to expand...

The headlights are pretty terrible, although most halogens through projectors are for some reason. I know most people upgrade them to LEDs, but I'm hesitant to do that in projectors not built for it. I need to do some more digging to see what brand of LEDs work the best and what the cut off on them looks like before I figure out what to do.

Unfortunately, the lights built for LEDs are really expensive and seem hit or miss in terms of quality. The Morimoto ones are $1,500 and require a bunch of wiring that I can't be bothered to figure out. I'm not sure how easy it is to open up the headlights though, I know you can bake them and pry them apart but some lights just don't like that. I assume I could retrofit Lexus projectors.

I suppose worse case I get the set up for behind the grill driving lights. There are some brands that claim to be D.O.T approved too, so if I go that route I'll need to scout around. I'm sure reputable companies like Hella have options. 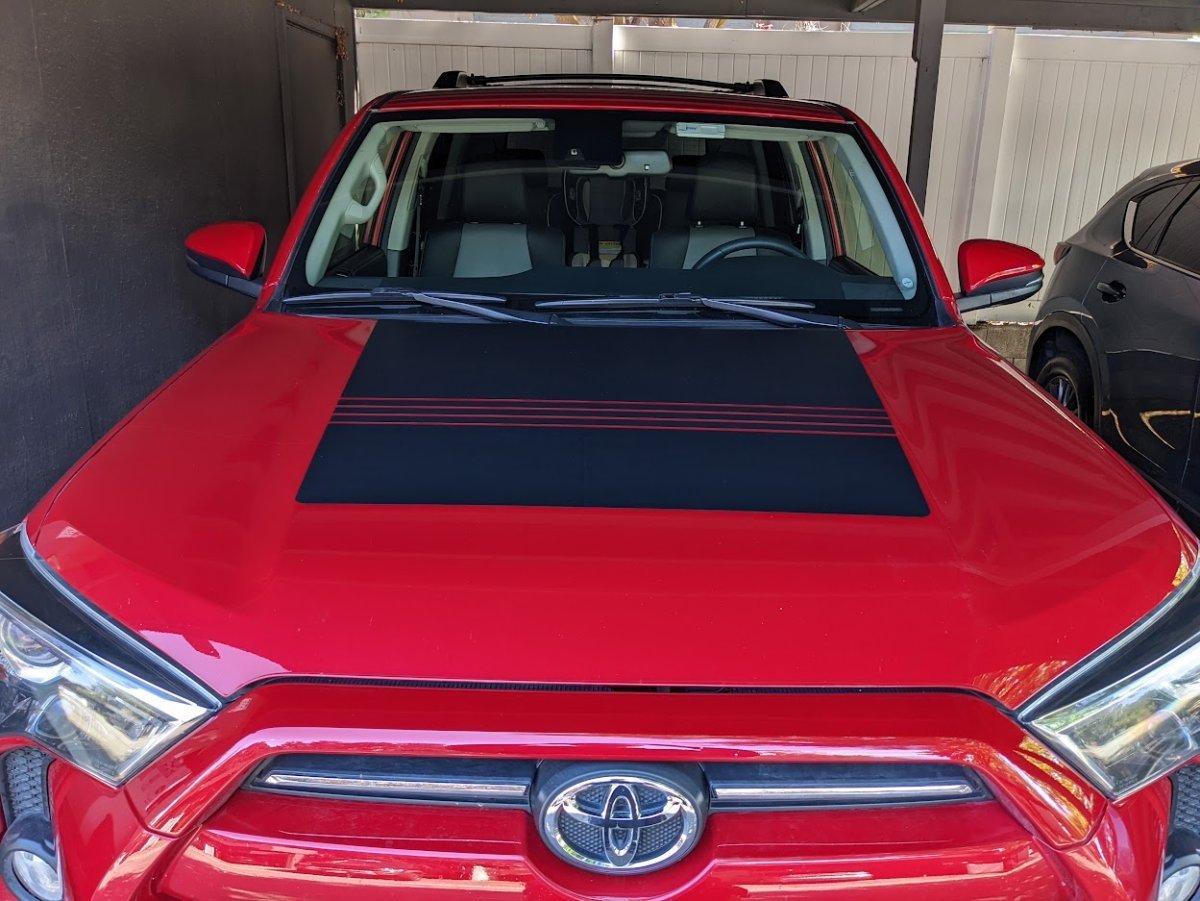 The glare off the hood is pretty ridiculous and I'd forgotten how bad it is with Toyota trucks. A guy I work with runs a small decal business on the side and made this up for me and put it on in the parking garage. It's so much better driving now since there isn't a super bright spot on the hood, plus I like the way it looks.

Once it's no longer a million degrees out, I'm going to get the LED fog lights swapped over and put on the TRD Pro grill.

Also, when I get some time, I'm going to put on a set of KO2's since I hate the tires that came on it.

Got my bug shield, TRD Pro grill, Raptor lights, and yellow LED fog lights all put on today. I think it looks much better and I'm glad I went with 3 Raptor lights instead of the 4 everyone else seems to go with. 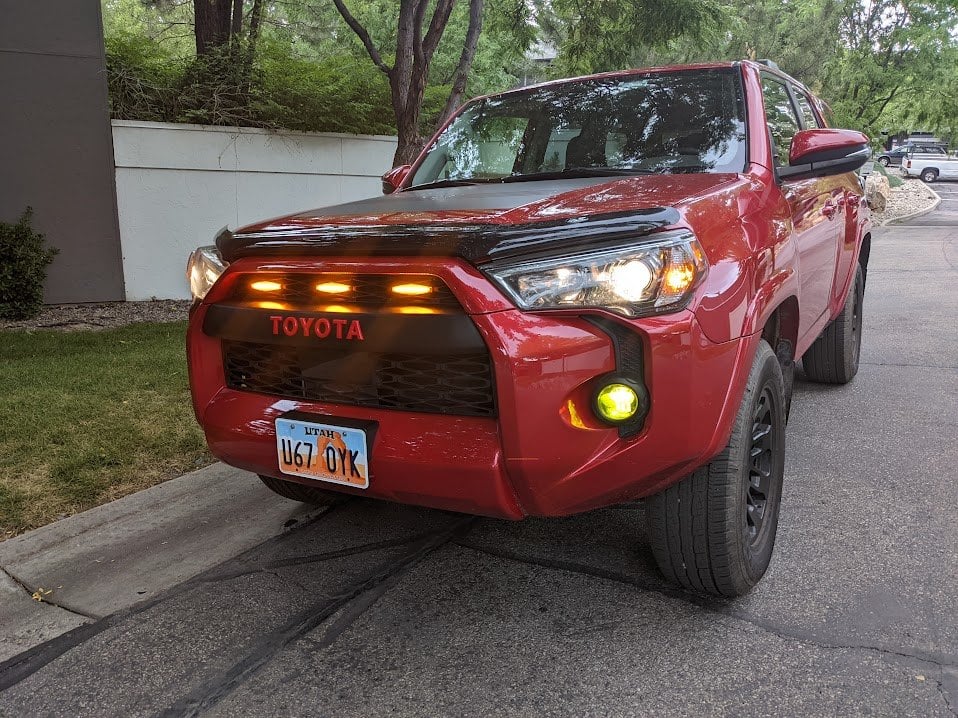 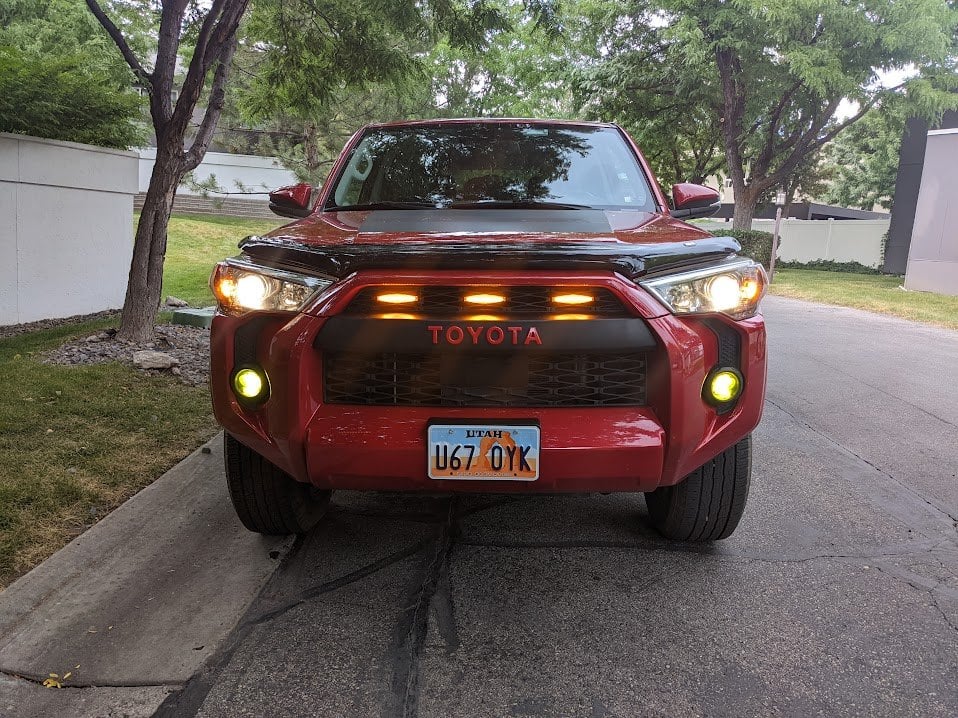 I wasn't expecting to buy tires so soon, but my rear tires were shredded on the freeway with no hope of repair. So after limping to Discount Tire I now have a set of BFG KO2's, which look really good with the white lettering facing out. 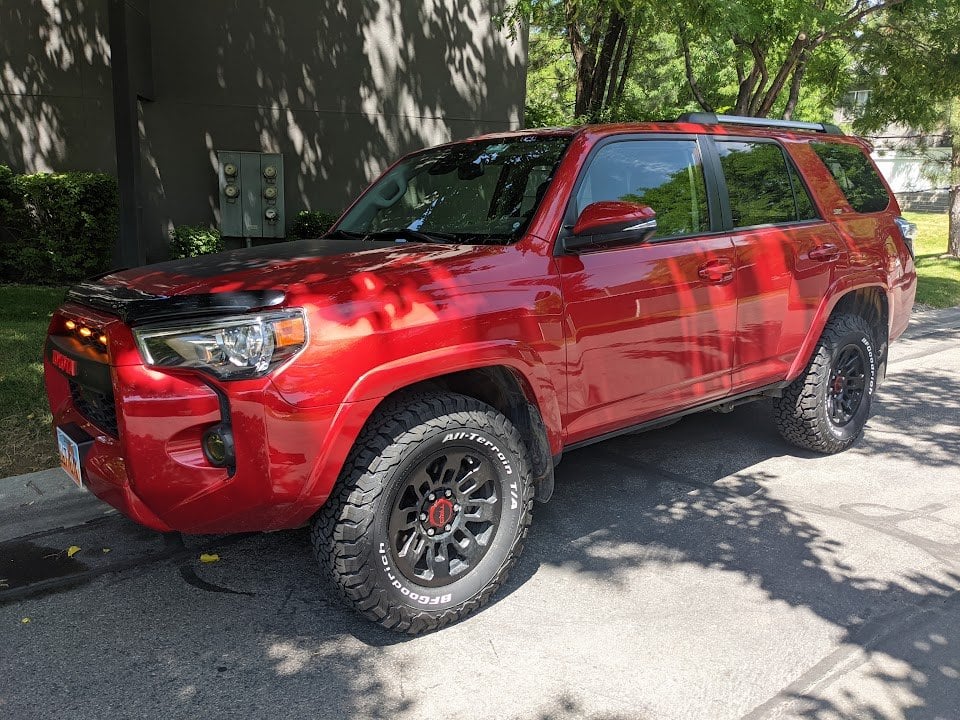 Welcome to the Winter-Water Wonderland 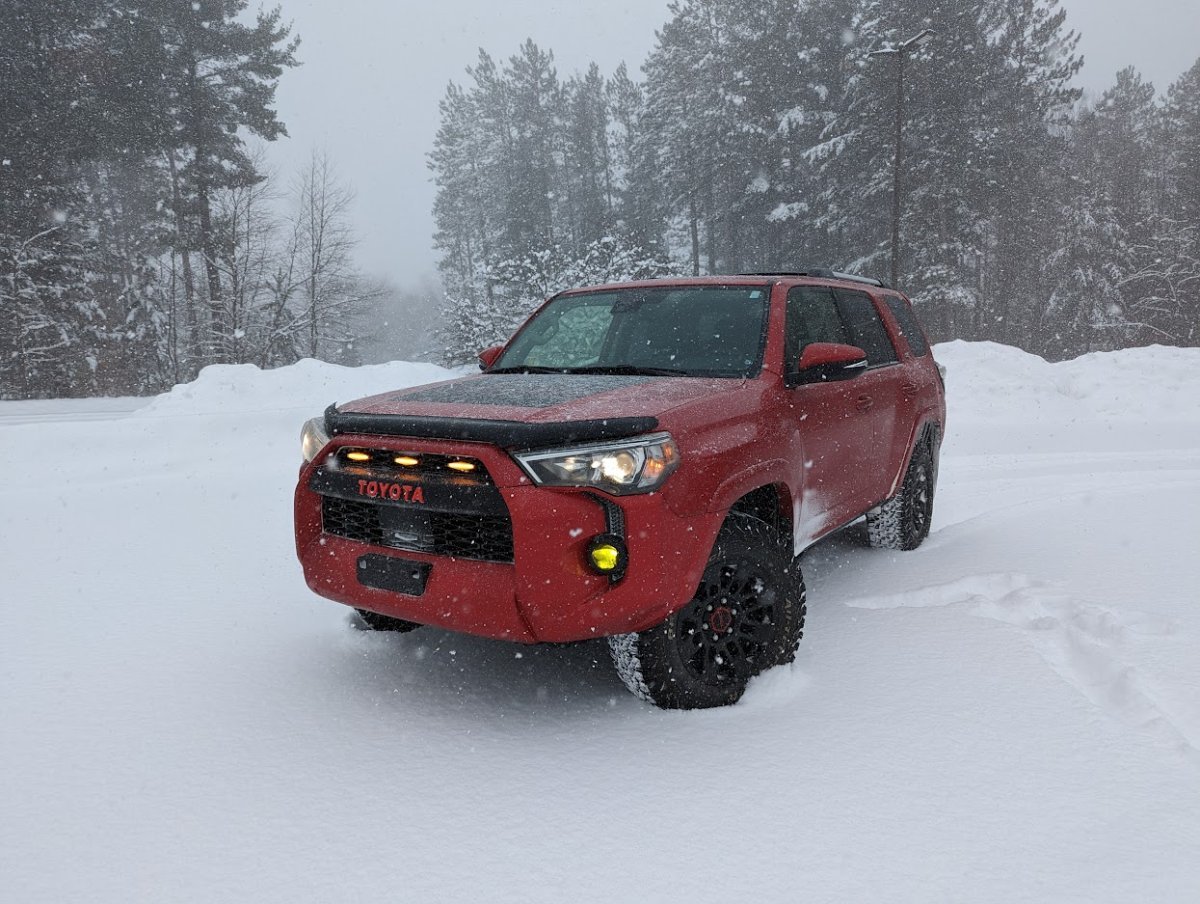 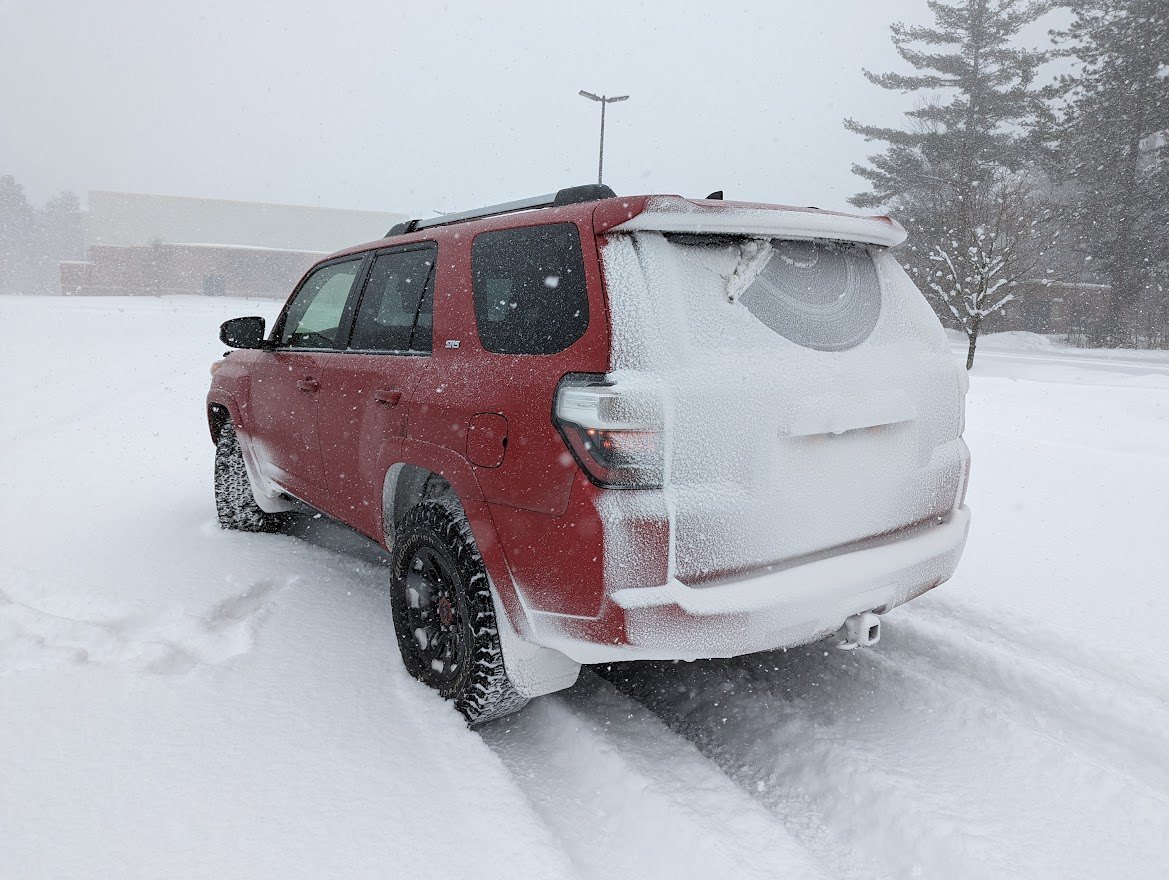 Northern Michigan is squarely in the crosshairs of "Elliot" a bomb cyclone that is dropping upwards of 30" of snow between today and tomorrow. While moving and needing to pull a trailr was one of the reasons for getting the 4Runner, this is really why I have it. As much as I loved my Volvo, Northern Michigan winters are something else and there's no way my car would've made it, even with winter tires. You need ground clearance here and the 4Runner offers enough to get through some pretty gnarly drifts. As of right now, we have about 12" of snow, but the drifts are upwards of 36" in some areas. Thankfully, the snow is pretty light and powdery so I can just trudge through whatever, but having driven into town today, I had zero issues. The BFG KO2's are a godsend in the snow and the 4Runner has a great 4WD system that just keeps on trucking. Town is about 20 minutes away and only the main road had been ploughed. Still with a decent amount of snow and drifts, I just trumbled along passing cars and trucks that were scattered in the ditch.

I did learn rather late though that I need something to keep the snow from building up on the rear window. The "spolier" that's on the back is supposed to help with this but as you can see, it doesn't.

Nice to see a 4Runner on the front page of GTP, I love Barcelona Red.

The prices of these have got insane. You will never see a brand new one sitting in the lot around here, used ones will sell for over their msrp.

The 5th gen is timeless, I will drive mine until the wheels fall off or until they stop selling gas.
Last edited: Jan 15, 2023