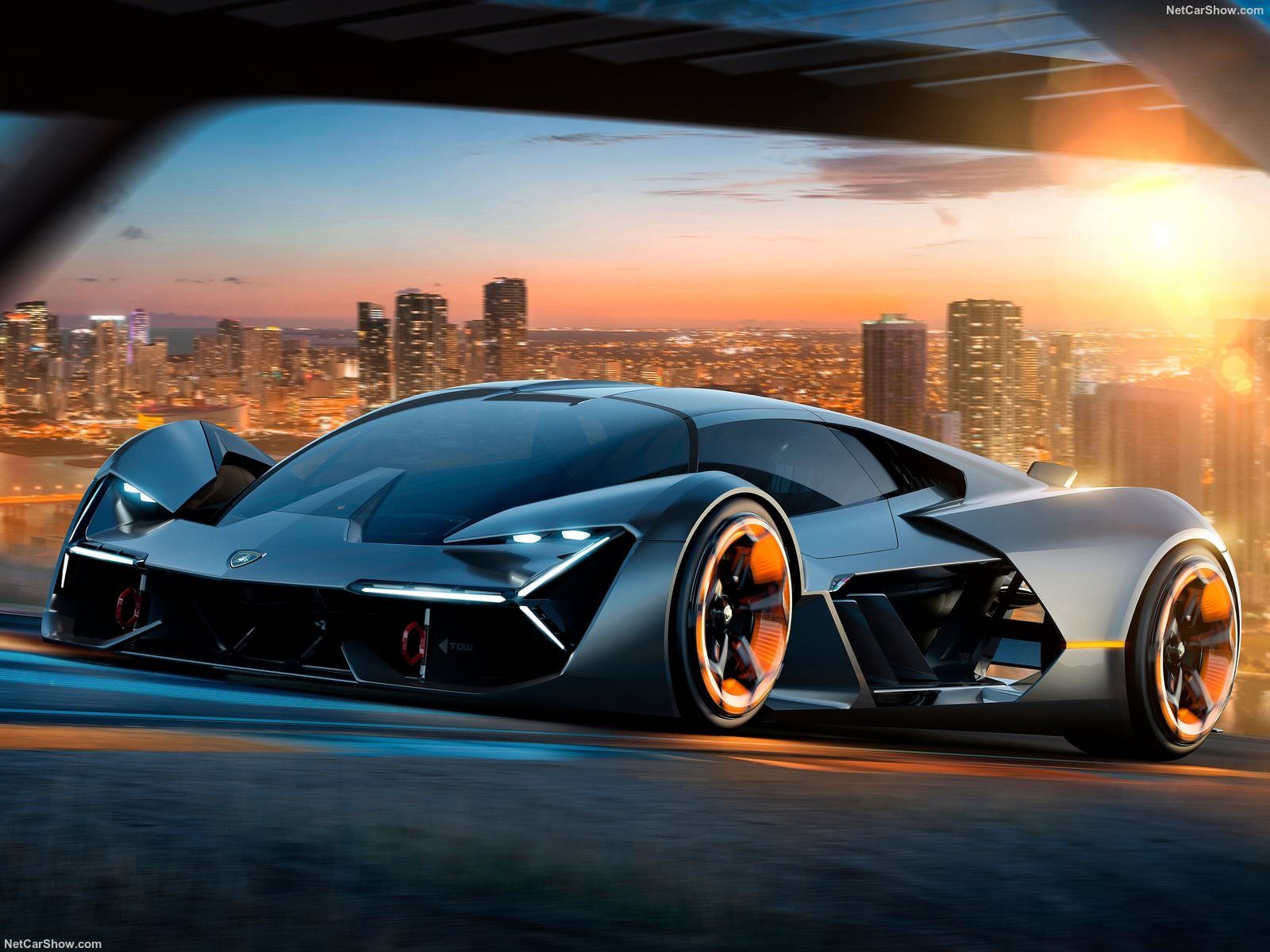 OTHER
• Electric motor
The Terzo Millennio uses high-capacity supercapacitors in lieu of batteries, due to their more rapid storage and discharge of energy. These supercapacitors have been made to simultaneously capture and release energy to give the car an increase in high performance, without having the depend on chemical reactions. Each wheel, the rims of which glow orange, contains an electric motor, so that the amount of torque can be controlled individually, making the car's stability as good as a modern Formula One car. Because there is a motor on every rim, the car would be all-wheel drive if it were a running model.

• Autonomous capabilities
The Terzo Millennio is reported to have an autonomous system, but only for racetrack driving. This system would make the car run a full lap without any mistakes, then teach the driver how to run the lap on their own, using a ghost car, which is based on video game series such as Forza and Gran Turismo.

• Design and body
The car still inherits the modern Lamborghini design, with the Y-shaped headlights and taillights, and the triangular front trunk and rear engine bay. Carbon fiber composite is used entirely for the body panels, containing nano-tubes that can repair itself if the factory-fitted sensors detect any small cracks and dents in the panels. The body of the car is monitored by a health system. 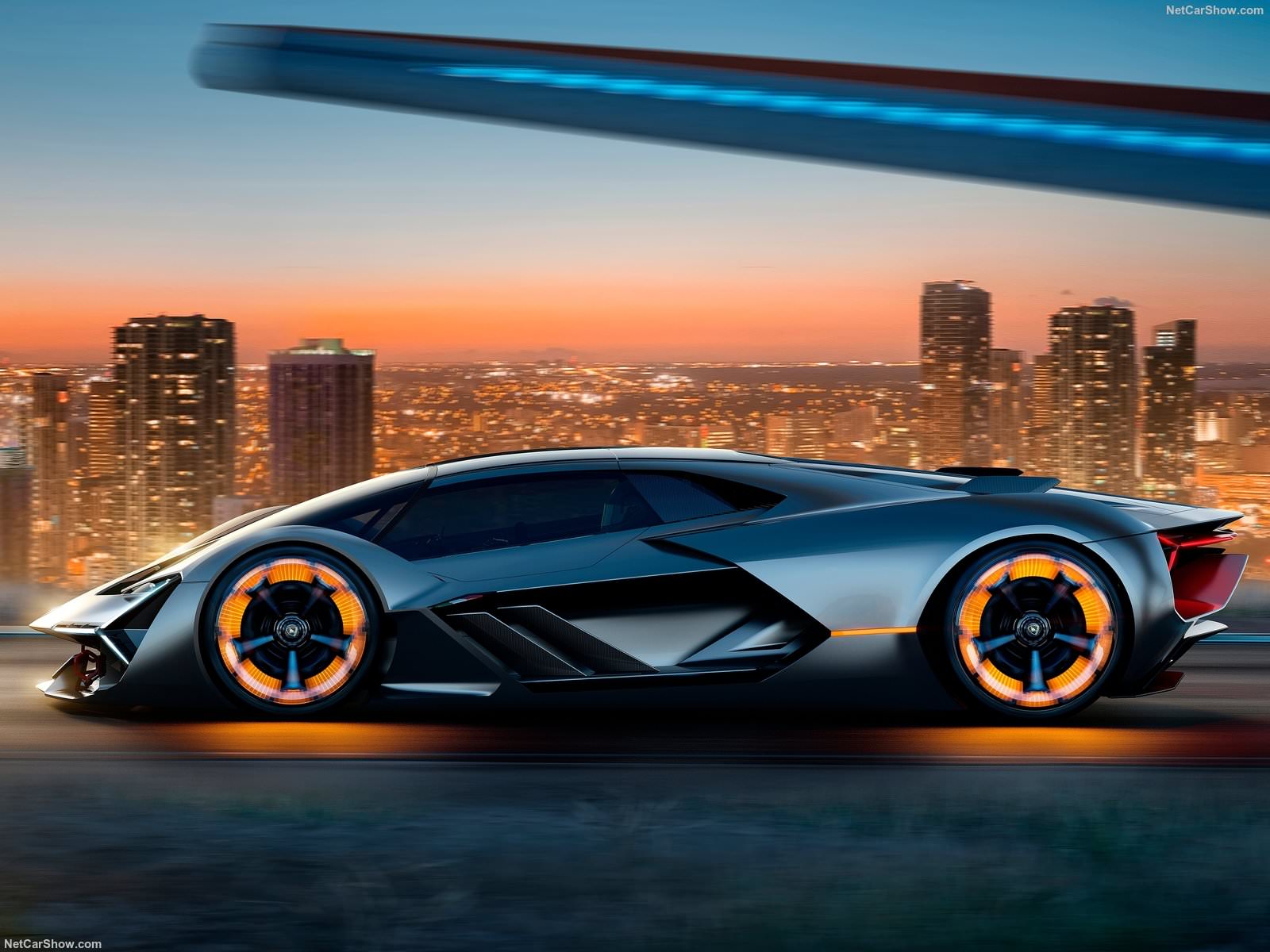 Automobili Lamborghini in collaboration with two laboratories of the Massachusetts Institute of Technology marks the first steps of a possible future Lamborghini electric super sports car.

On the occasion of this announcement Lamborghini presents the new design concept "Lamborghini of the Terzo Millennio". The concept physically imagines design and technology theories of tomorrow, while sustaining the visual intrigue, breath-taking performance and, most importantly, the visceral emotion found in every dimension of a Lamborghini. It is made for future super sports car enthusiasts.

The technological goal of the project is to enable Lamborghini to address the future of the super sports car in five different dimensions: energy storage systems, innovative materials, propulsion system, visionary design, and emotion. 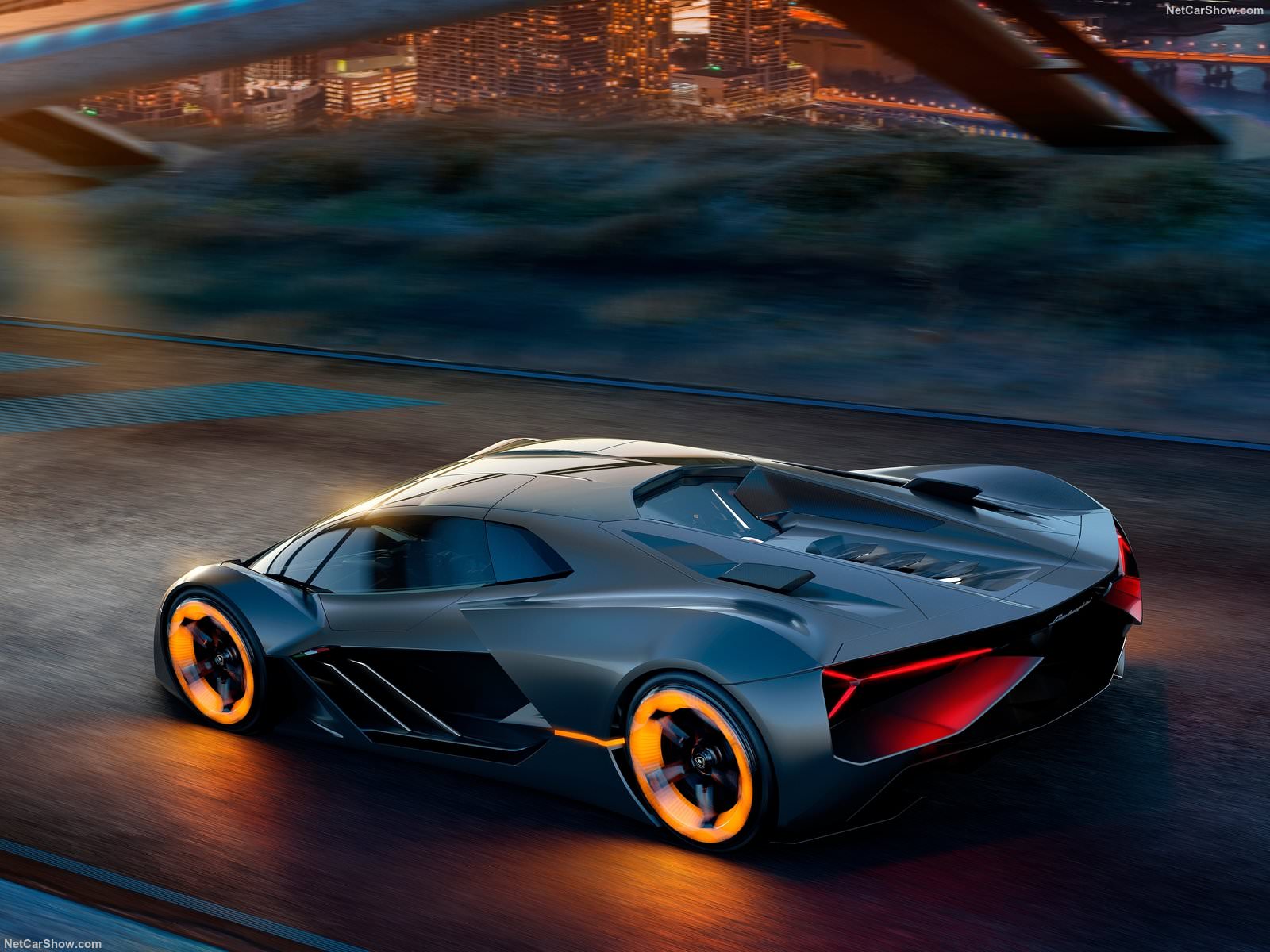 The first two dimensions are conceived together with the two laboratories at the Massachusetts Institute of Technology: the "Dinca Research Lab", led by Prof. Mircea Dinca, Department of Chemistry and the "Mechanosynthesis Group", led by Prof. Anastasios John Hart, Department of Mechanical Engineering. The collaboration is substantially financed by Automobili Lamborghini and intended to lead to radical innovation in energy storage systems technology and material science.

Stefano Domenicali, Chairman and Chief Executive Officer of Automobili Lamborghini, says: "Exactly one year ago we have signed an agreement with the MIT-Italy Program at the Massachusetts Institute of Technology which marked the start of a collaboration between two outstanding entities for the creation of a project that intends to write an important page in the future of super sports cars for the third millennium.

Collaborating with MIT for our R&D department is an exceptional opportunity to do what Lamborghini has always been very good at: rewriting the rules on super sports cars. Now we are presenting an exciting and progressive concept car. We are inspired by embracing what is impossible today to craft the realities of tomorrow: Lamborghini must always create the dreams of the next generation." 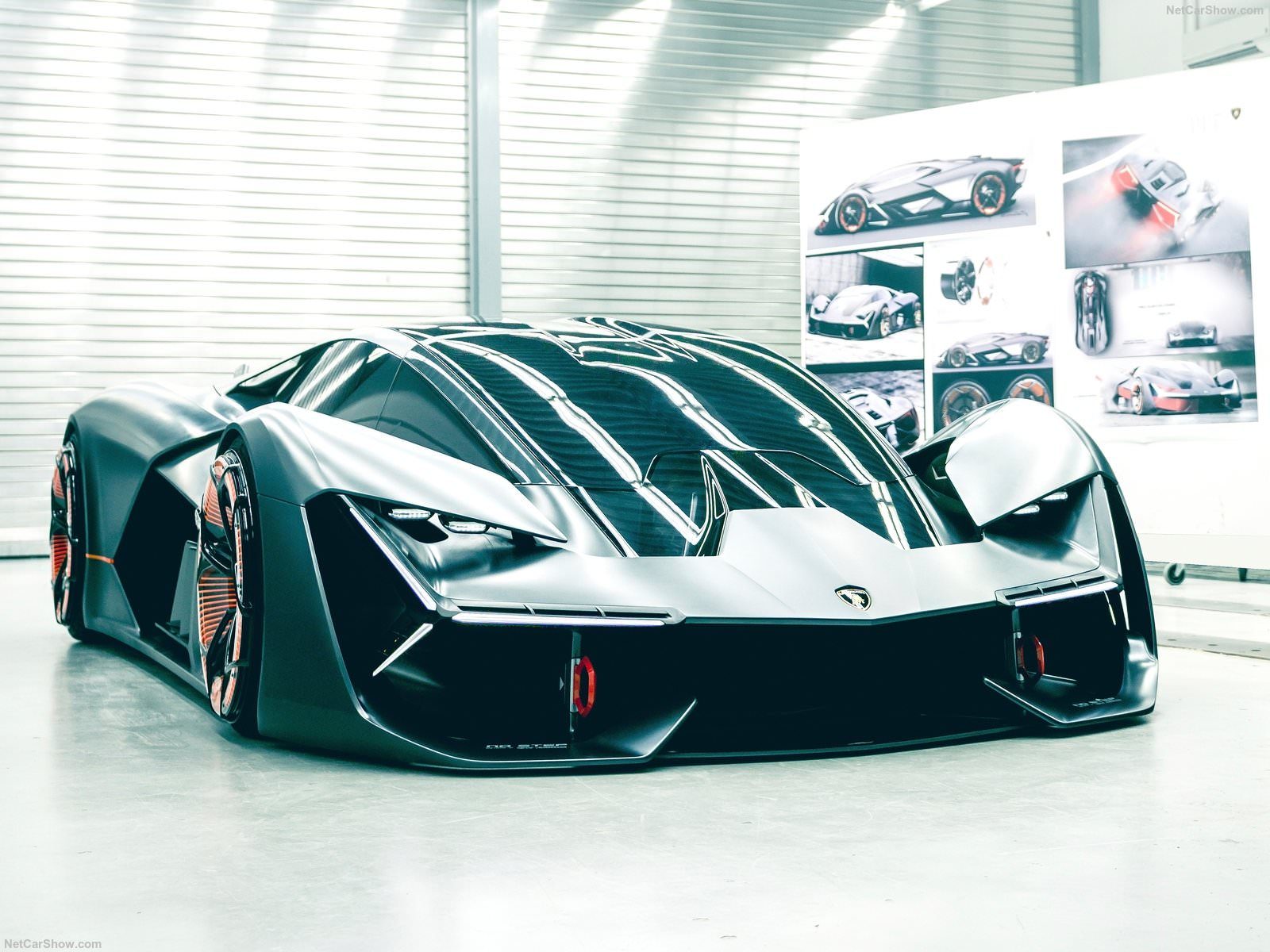 The strategy of creating super sports cars with uncompromising performance generates Lamborghini's motivation to revolutionize the approach to energy storage, moving away from conventional batteries and investigating the potential of supercapacitors to equip the Terzo Millennio.

This is in line with the application of low voltage supercapacitors in the V12 Aventador, which started five years ago. The next logical step is the development of a storage system able to deliver high peak power and regenerate kinetic energy with very limited influence from aging and cycling during the vehicle's life, and with the ability to symmetrically release and harvest electric power. Thus, the collaboration with Prof. Mircea Dinca is aiming to overcome the limits of today's technology and close the gap on conventional batteries' energy density while preserving the high power, symmetrical behavior and the very long lifecycle related to supercapacitor technology.

Prof. Dinca says: "The new Lamborghini collaboration allows us to be ambitious and think outside the box in designing new materials that answer energy storage challenges for the demands of an electric sport vehicle. We look forward to teaming up with their engineers and work on this exciting project". 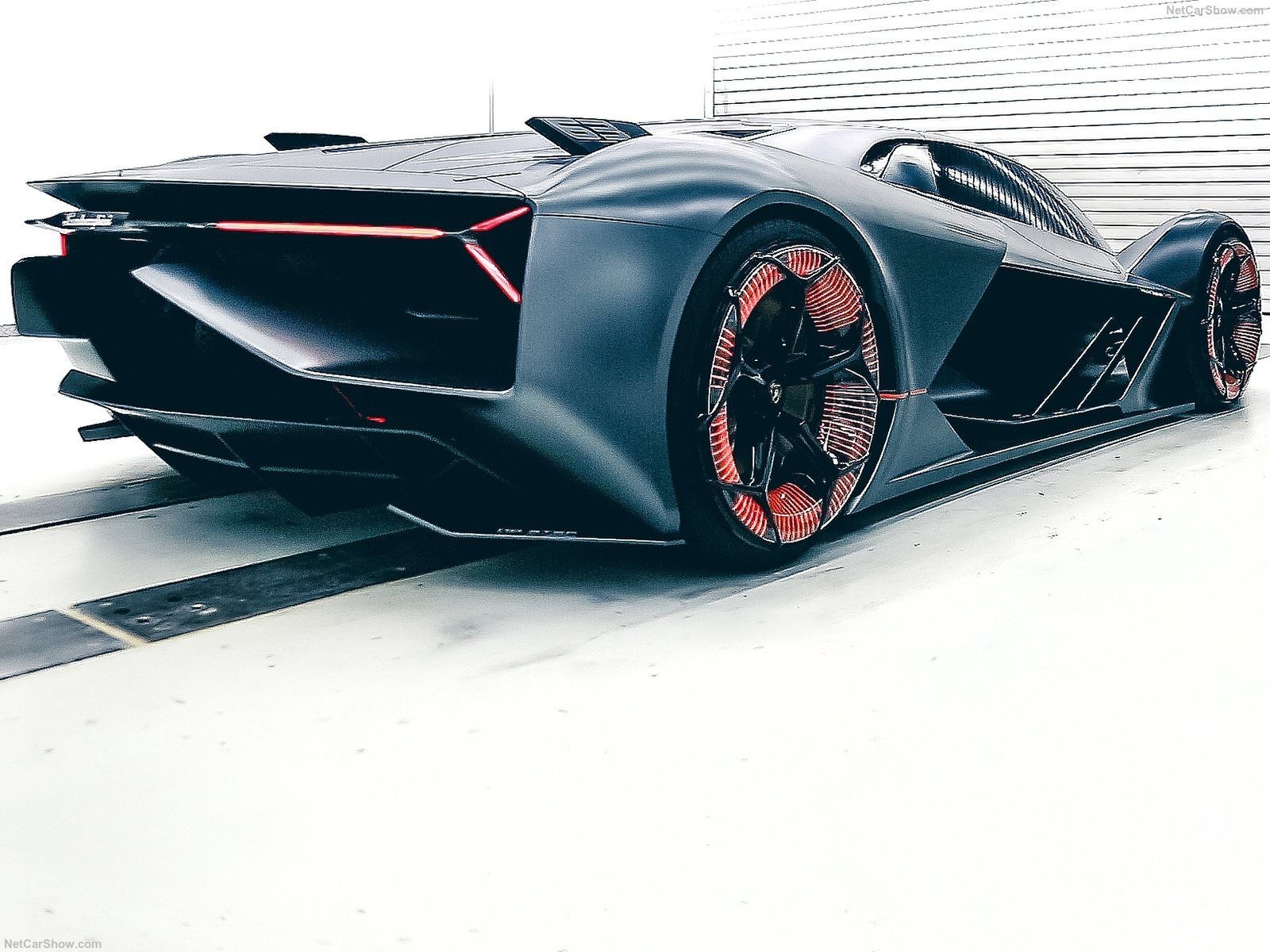 To support this revolution in energy storage systems, materials and their functions have to change, too. Lamborghini aims to further develop its leadership in the design and production of carbon fiber structures and parts, enhancing its ability to develop features and functions that take lightweight materials to the next level.

For this reason, the cooperation with Prof. John Hart will investigate the new manufacturing routes for carbon fiber materials constituting the bodyshell of the Terzo Millennio, which will also act as an accumulator for energy storage and enable the complete body of the car to be used as a storage system. Prof. Hart says, "we are thrilled to combine our expertise in advanced materials and manufacturing with the vision and support of Automobili Lamborghini, and to realize new concepts that will shape the future of transportation."

The project also aims to combine the technology to continuously monitor the whole carbon fiber structure, both visible and invisible, with the concept of "self-healing": the target is to provide the Terzo Millennio with the ability to conduct its own health monitoring to detect cracks and damages in its substructure derived from accidents. In this case a self-repairing process starts via micro-channels filled with healing chemistries, reducing to zero the risks of small cracks propagating further in the carbon fiber structure. This allows further weight reduction with increased use of carbon fiber or the application of CFK to high-fatigue parts.

The energy storage system goes hand-in hand with performance: each wheel incorporates an integrated electric engine, perpetuating the commitment to four-wheel drive and in the meantime harvesting the opportunities provided by electric motors: high torque, reversibility, and the possibility of moving energy by wire. The Terzo Millennio therefore also embodies the first steps for Lamborghini to go in the direction of creating a "Lamborghini Electric". Moving the electric motors into the wheels has another positive effect: freedom for designers and aerodynamicists. 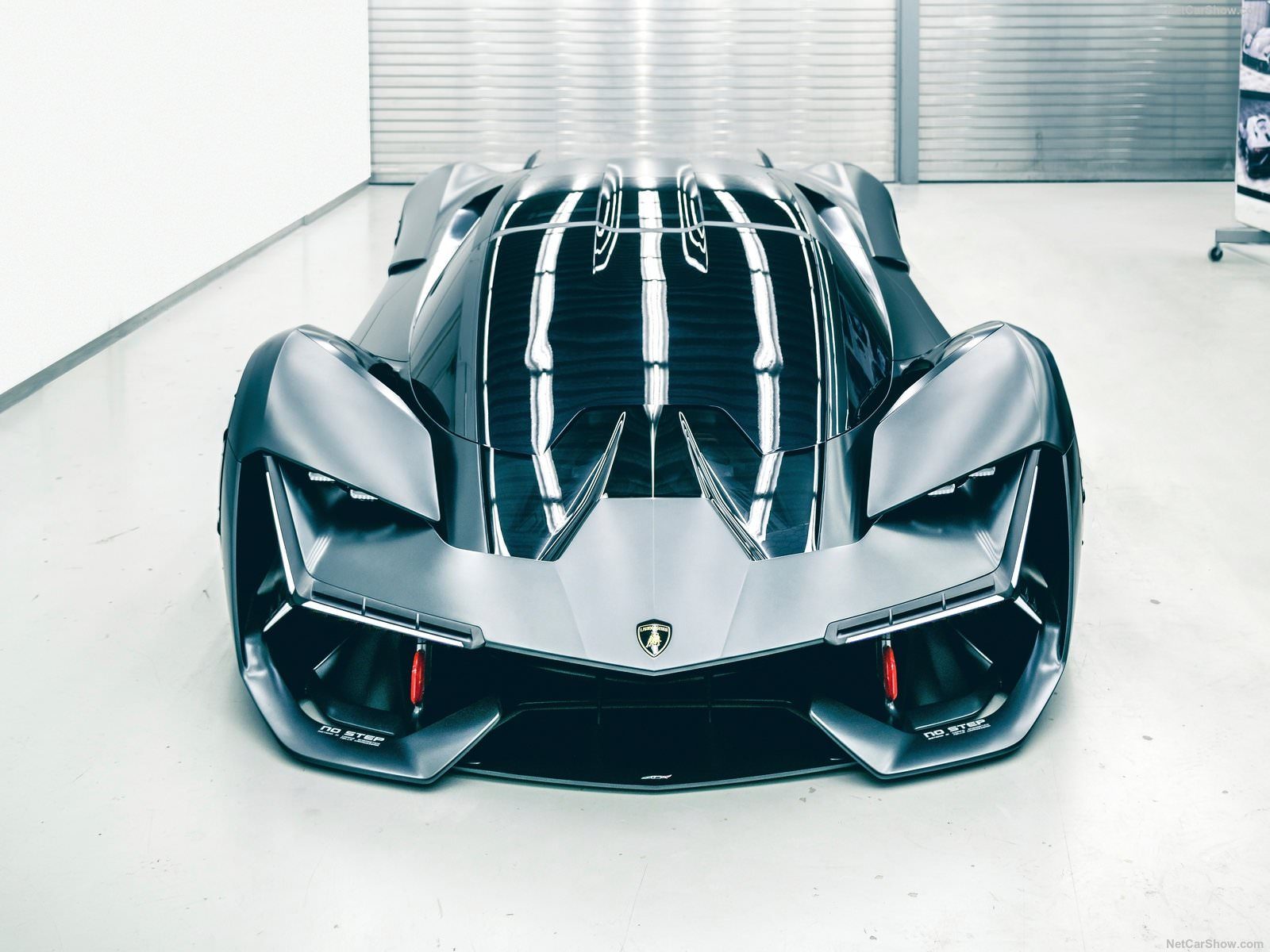 The Terzo Millenio is the visionary outcome conceived by the Lamborghini Centro Stile to express future design elements, taking into account the radical changes in technology and anticipating elements of forthcoming Lamborghini design. An example for a very strong statement is the evolution and further development of the Lamborghini typical Y-signature in the front and rear lights.

As a result of the change in technologies the design can be a radical expression of aerodynamic supremacy, based around an entirely new architecture, totally dedicated to perfecting airflow. A highly advanced monocoque based on Lamborghini's Forged Composite technology can be modelled, containing only the energy accumulation system and driver's and co-driver's seats, inspired by race cars.

Fundamental to a Lamborghini hypercar of the future is sustaining the emotion of driving a Lamborghini, and an immersive driver experience. The responsiveness of the electric motors, the four-wheel torque control and the dynamic body control system will enhance the driver's experience, projecting it into the third millennium. Finally, the consequent aerodynamics and innovative lightweight approach will result in a new dimension of longitudinal as well as lateral dynamics, in this combination until today unknown from electrified cars.

The Terzo Millenio's virtual cockpit allows more than travelling the highways of a future world: its Piloted Driving simulation allows the driver to be taken around a track such as Imola by a virtual expert before the driver takes over to feel like a 'pilot' himself, experiencing the real car and circuit while following the virtual ghost car.

I would see this car being added to Forza rather than GT but boy does it look mean as hell!

I would like to see more concept cars in GT that aren't part of the VGT program such as this. I remember that in past GTs we used to have cars such as Cadillac Cien, Volkswagen W12 Nardo, Audi Le Mans Quattro, Infiniti Coupe, Acura DN-X, Nissan GT-R Proto, Audi Nuvolari Quattro, Toyota Pod, Suzuki GSX-R/4, etc.

Cristobal1234
I would like to see more concept cars in GT that aren't part of the VGT program such as this. I remember that in past GTs we used to have cars such as Cadillac Cien, Volkswagen W12 Nardo, Audi Le Mans Quattro, Infiniti Coupe, Acura DN-X, Nissan GT-R Proto, Audi Nuvolari Quattro, Toyota Pod, Suzuki GSX-R/4, etc.
Click to expand...

Only shows that GT has been here for a long time already.