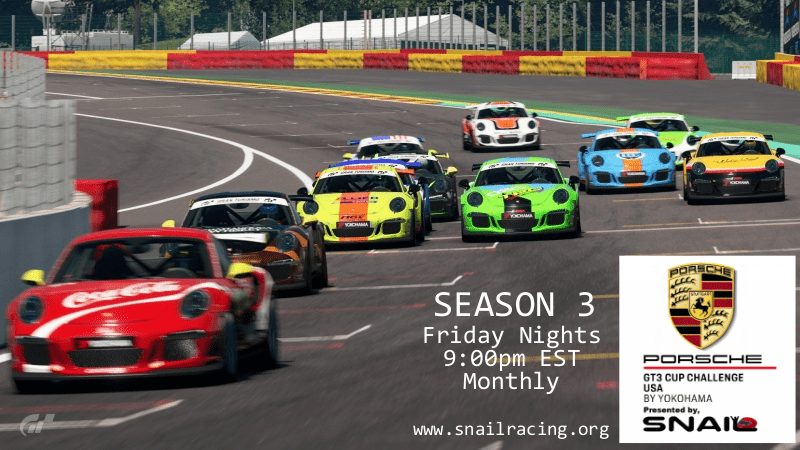 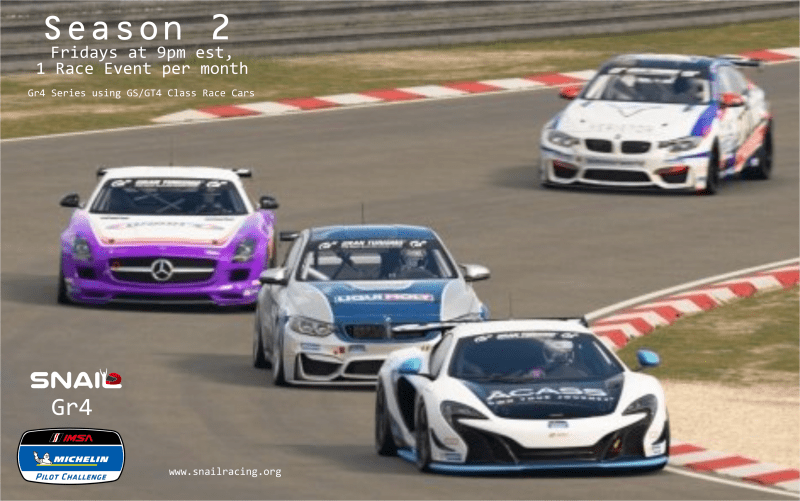 Hit the picture links above for series details and schedules. Hoping to see and welcome some new entries to our series.

Hit the picture links above for series details and schedules. Hoping to see and welcome some new entries to our series.

2 Primary spots remaining in the Porsche GT3 Cup Challenge, and plenty of Reserve spots available for the Michelin Pilot Cup Challenge series. Hit the picture links above for series details. Hoping to round out and finalize a full roster.
Last edited: Jul 13, 2021

1 Primary spot remaining on the roster for the Porsche GT3 Cup Challenge series, set to start Friday, August 13th. See the picture link above in the first post to join us.

Have a look and see if one of these might be of interest.

Just a refresh of the thread in hopes that we might attract a few new drivers to one or both of the series.

The Porsche GT3 Cup Challenge Series currently has 1 full time primary roster open for the taking. This provides a dedicated issued or user created livery and number selection and a guaranteed entry assuming you confirm available by the designated deadline. If full time is too much of a commitment, we carry a Reserve Driver pool that is based on a first to confirm available for upcoming events basis. Reserve Team liveries are provided and issued for use. Typically we have 2-3 available grid spots, so even Reserve drivers are afforded plenty of opportunity to race in this parity based Challenge series.
Have a look at the Broadcast above and jump to any point in the Race to get an idea of the competition, and if interested select the picture in the first post to view the series details.

The Michelin Pilot GT4 Cup Challenge series is still accepting Reserve entries, however, with a large Reserve pool and strong driver attendance, getting an opening is a bit more difficult but not impossible for this one. Reserve Drivers may choose any car remaining available, and Liveries are available for most or can be user rendered meeting series requirements. Priority for Reserves is based on previous event participation, and if equal among Reserve drivers, then defaults to a first to confirm available basis. At present, we have 1 driver that has top priority, and 4 drivers with equal priority. As mentioned, it would be a long shot, but still always a chance. Feel free to have a look at this Broadcast as well and jump to any point in the Race to get an idea of the even closer competition, and if interested for this one, select the corresponding picture in the first post to view this series' details.

Hoping to attract and introduce some new faces to 2 very challenging parity based series. It takes more than just being fast to do well....consistency and minimal mistakes is what gets rewarded. Any pace level has an opportunity to win.
(Our Season 2 Porsche Cup Champion did not have 1 overall Event win the entire season, but won the Season with consistently great racing and very hard fought battles and consistent top 5 finishes overall.
If your looking for a challenge and something a little different than the norm, check us out.

GT Sport Replay
Search tags:
mpcc
or
snailgt3cup​
See what kind of racing we have going on to carry us this late in GT Sport's life cycle and into the GT7 Era.

Check us out and join...still alot of season left to get in and acclimated before we kick off new seasons on the new installment.
Last edited: Sunday at 8:21 PM

Porsche GT3 Cup Challenge*Special Event 1hr Endurance at LeMans*, Sign up inside to join us