(Searched the last few pages of this music & media forum to see if such a thread already existed. Found nothing. Also, I kind of wished there was a “Gran Turismo Series” forum instead of separate ones for each game so that this topic fits in there better, but this forum will have to do for now, I guess.

EDIT: Okay, did a search on this specific forum and I found a few. No such general thread exists, though. Just people asking questions, so... I hope you don’t mind me doing this one, Jordan/Famine.) 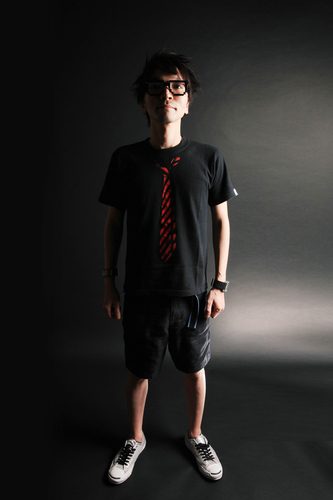 Daiki Kasho, the composer behind some of the Gran Turismo series’ most beloved music such as “What To Believe,” “All My Life,” and his most popular song by far, “5OUL ON D!SPLAY.” With Gran Turismo 7 on the horizon, I decided to create a general thread for him here since so many of us here are fans of his music.

According to his personal page on Kiwi, Kasho was born on November 2nd, 1976. Besides Gran Turismo, he has worked on numerous other projects including SEGA’s F-Zero GX, Kaido Battle, King of Fighters, and others. Beyond that, not much else is known about him aside from this interview on RocketBaby and that he was recently married as of last year according to him on his Facebook. He also has a Twitter account which he seems to be using more as of late.

Contrary to some people’s beliefs, Kasho does not do any vocal work himself, nor is he by himself when composing. He tends to work with other J-Rock bands such as Dakota Star (GT4) and Fade (GT5 and GT6, though Fade band members Rui and Kansei are credited in GT4’s “It’s All About You.”) He was by himself, I believe, for GT3 where he first debuted, sporting an entirely different musical style as well as remixing Lenny Kravitz’s “Are You Gonna Go My Way?” for the US intro of GT3.

In 2012, Kasho had a rare live concert at what is arguably PD’s first attempt at live esports, the GT Asian Championship. While Fade’s vocalist Jon Underdown might’ve done an awful job at singing live to some (shrug), to me, it was awesome, and makes me question why they haven’t done such a concert for the current FIAGTC events yet (barring the pandemic, of course).

Which brings us to now. Sometime between GT6 and GT Sport, Kasho has officially joined PD as a sound designer and has had his own studio at PD’s HQ since, rather than being freelance as before. Along with likely helping with the car audio, this pretty much means that Gran Turismo 7 will be his biggest contribution yet. If Sport is anything to go by, not only he’ll do new full songs, but be in the menu music and the after-race jingles as well. Maybe he’ll even do his own take on the series’ theme, “Moon Over the Castle.” (Masahiro Andoh has officially retired this year, btw)

Aaaaaand that’s my opening post. I’ve been a big fan of him since first hearing “5OUL” in 2010 (though earlier, I rocked out to his remix in GT3 every time the US intro played back then) and he pretty much has been on fire ever since, influencing certain fan work of mine as well. I really can’t wait to hear what he has in store for GT7.

Love him or dislike him, share your thoughts below.

I love Kasho’s work and I’ve seen that live concert. It was hot garbage and the attendees looked like they had guns to their heads

Nah, some Japanese audiences can be like that. I watched a video of Utada Hikaru singing one of her Kingdom Hearts songs live and the audience was eerily calm. No one was jumping around and going crazy.

If this was any other audience like, say, the FIAGTC instead, then I almost guarantee people will be going crazy.

But yeah, even Jon was irked that the audience was being too quiet.

I don't hate him, but I don't really care for his work. Something about it just reminds me of the cringe worthy 'rock' music I listened to as teen. I am past that point in my life and moved onto more mature music.

HarVee
I don't hate him, but I don't really care for his work. Something about it just reminds me of the cringe worthy 'rock' music I listened to as teen. I am past that point in my life and moved onto more mature music.
Click to expand...

I'm like you, but in reverse, I guess? I used to listen to a lot of pop and rap as a kid, but as I grew older into my teens and adulthood, rock became my go-to. Alt and video game rock, mainly... Guess we just have different definitions of being mature, huh? shrug

Eh, besides, other than, uh, "Looking For You," I wouldn't say they're cringeworthy if you look at the lyrics. Especially "Place in This World." Maybe a bit emo, but eh... =/

But that's just me.

I really like some of his songs (e.g. Day To Live, Survive, Soul On Display, Edge Of The World), but some are just noisy racket in my opinion (e.g. Turbo). Guess we all have different tastes

I wish he would release an official compilation album of all of his Gran Turismo songs, because a lot of the recordings floating on the internet are poor quality rips from the game. Especially those from the GT4 era. I mean they are probably the highest quality recording available outside of his studio, but they just sound so poorly mixed (or maybe that's how the song is supposed to be like? We aren't exactly talking about a philharmonic orchestra here).

I also really like "It's All About You" but is that more Dakota Star than Daiki Kasho? I dunno. That's another band I wish would make a return to GT. I love their songs for the openings of Kaido Battle.

Anyway, for GT7 I do hope he puts out some new tunes, maybe a MOTC remix as you said. Not too long to wait now

LeGeNd-1
I also really like "It's All About You" but is that more Dakota Star than Daiki Kasho? I dunno. That's another band I wish would make a return to GT. I love their songs for the openings of Kaido Battle.
Click to expand...

I thought it was, but as noted in the OP, it turns out it's both a Dakota Star and Fade song. Fade band members Rui and Kansei are credited as seen here:

Which explains why it sounds so much like Daiki's later work with the heavy bass and drums.

Unfortunately, both Dakota Star and Fade have broken up. I dunno when Dakota broke up, but Fade split in 2014 after internal disputes regarding signing on with a major label (Universal Japan, in fact). Or an "indefinite hiatus," at least, according to their Facebook. -shrug-

Jon Underdown has been doing some work for Sonic as of recent, though. Surprisingly enough:

Apologies for the thread bump, but... Happy 45th birthday, Daiki!

As of now, we still haven't heard his work for GT7 yet, but I suspect we'll hear it first in the third major trailer for GT7, which could pop up at either The Game Awards or the FIAGTC World Finals in December.

Either way, not that long to go until the game releases in March.

So, uh, as mentioned in the other thread, Daiki Kasho has composed and arranged the ending theme to the anime, "World's End Harem," that just aired today (NSFW warning if you decide to Google it, btw). The song is sung by EXiNA and is called "Ending Mirage." You can listen to the short version here (don't worry, it's SFW):

Glad his style hasn't changed one bit. The full single will be out 2/9.