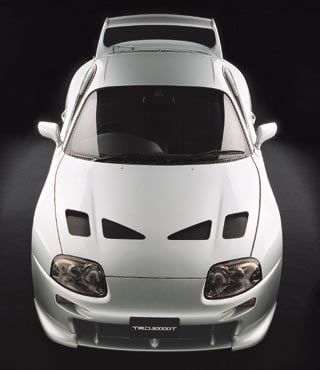 One of my favourite cars from GT1, though I confess I don't know a great deal about it.

The TRD 3000GT was first shown at the 1994 Tokyo Auto Salon much to the delight of Toyota fans and tuning car fans in general. The JZA80 Toyota Supra was already well recieved, and for TRD to bring out such extreme parts for it was sensational at the time. The TRD 3000GT body kit extended the guards by 50mm changing much of the entire exterior of the car, leading some people to belive it were a low production vehicle along the lines of RUF Automobile GmbH (Porsche).

The JGTC Supra wore the 3000GT aero parts in the final race of the 1994 season and showed exceptional speed, which would lead TRD to further hone the aero parts to gain the best performance possible. There are two types of rear wing available, although the ‘Type R’ wing is no longer produced. Except for the Type R wing, all TRD 3000GT parts are still available according to the TRD website, although the actual stock availabilty isn’t known.

The TRD 3000GT was never actually sold as a complete car, although cars were sold with the full catalogue installed. For many this was a very expensive option, but it’s possible to find JZA80 Supras with various genuine parts installed to make a car which is built according to their budgets. The TRD 3000GT bonnet, for example, is one part which despite costing 210,000 yen was a popular addition amongst Supra owners. A complete TRD 3000GT with the parts installed by Toyota, while not impossible to find, are still one of the most sought after JZA80s.

As is typical amongst the Japanese ‘Works Tuners’ (TRD, Nismo, Mugen, STi, Mazdaspeed, Ralliart etc), the engine of the TRD 3000GT at the time of it’s release was left close to standard, but with a full exhaust system and suspension modifications added to give a reasonable upgrade in performance over the already powerful base car. Later, engine packages were available which were released in stages going from mild street performance to ‘hard tuned’ packages illegal for street use. The original 1994 debut car though was all about properly functioning aerodynamics as opposed to outright speed, with Toyota investing a lot more financially into developing the 3000GT kit than previous attempts, using wind tunnel testing and 3D simulations to gain the best compromise between functionality and appearance. The engine was completely stock at the time of the TRD 3000GTs announcement, but later upgrades were developed for big increases in horsepower.
Click to expand... 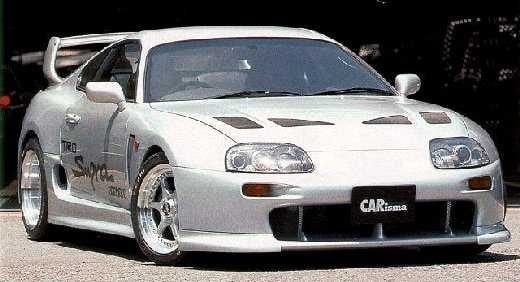 Talking from a point of view that has little knowledge about this car or the 400R but I think they belong together. Probably because they are tuned versions of their sports car variants and you got them from getting all golds on licenses in GT1. Regardless the TRD3000 looks TOUGH and deserves a re entry.