Took a day off this week to do a road trip to California for this thing. Drove her back with very little issues. It's a 1999 Nissan Sentra SE Limited. They were only made for that one year, and they came with the 2.0L SR20DE that was available in the 200SX SE-R starting in 1995 and ending in 1998 when it was cancelled. So Nissan put the SR20 in the 4-door and slapped a Limited badge on it for the last year of the B14 chassis. (2000 was a new body style)

This particular car has an engine swap. It's still an SR20, but has Nissan's version of VTEC called NEO VVL. That stands for "Nissan Ecology Oriented Variable Valve Lift and Timing". According to Wiki: VVL varies the duration, and lift of valves by using hydraulic pressure switch between two different sets of camshaft lobes. VVT varies the valve timing throughout the RPM range. Together they function similarly to Honda's VTEC system.

It also has the following parts -
Brand unknown, but I can also see that it has polyurethane steering rack mounts and control arm bushings. It does need some things, like axle seals and a interior refresh. The dashboard is crack free and clean. Door panels are pretty good, so I do plan on replacing the carpet and front seats. 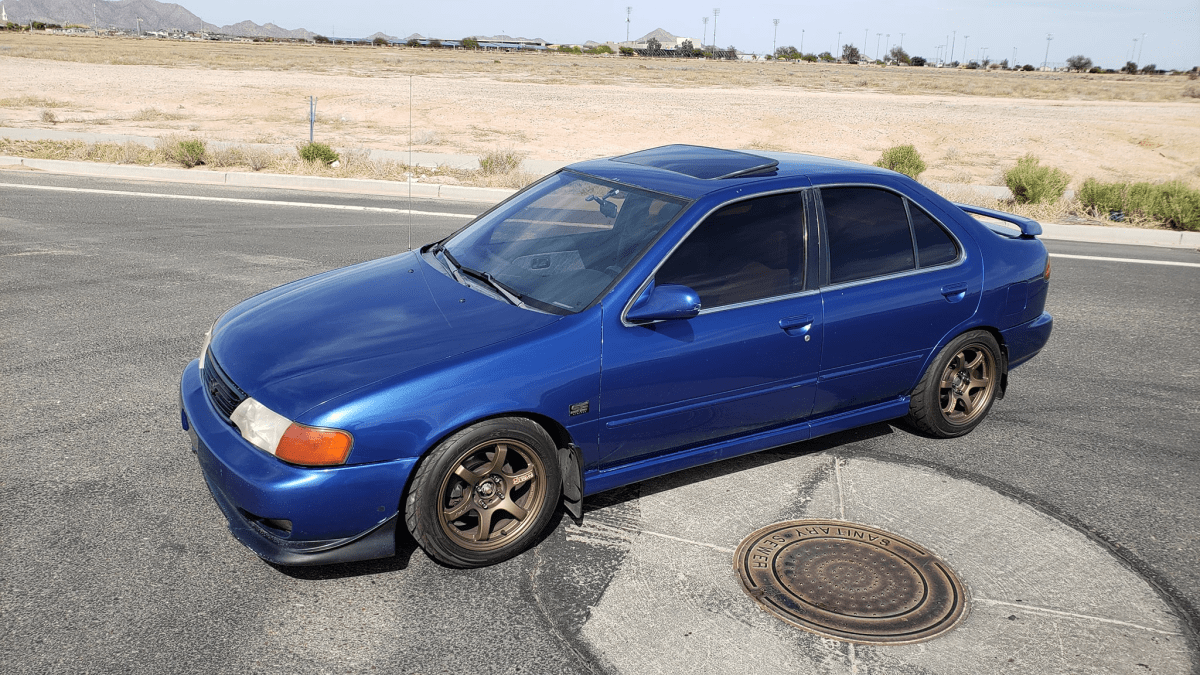 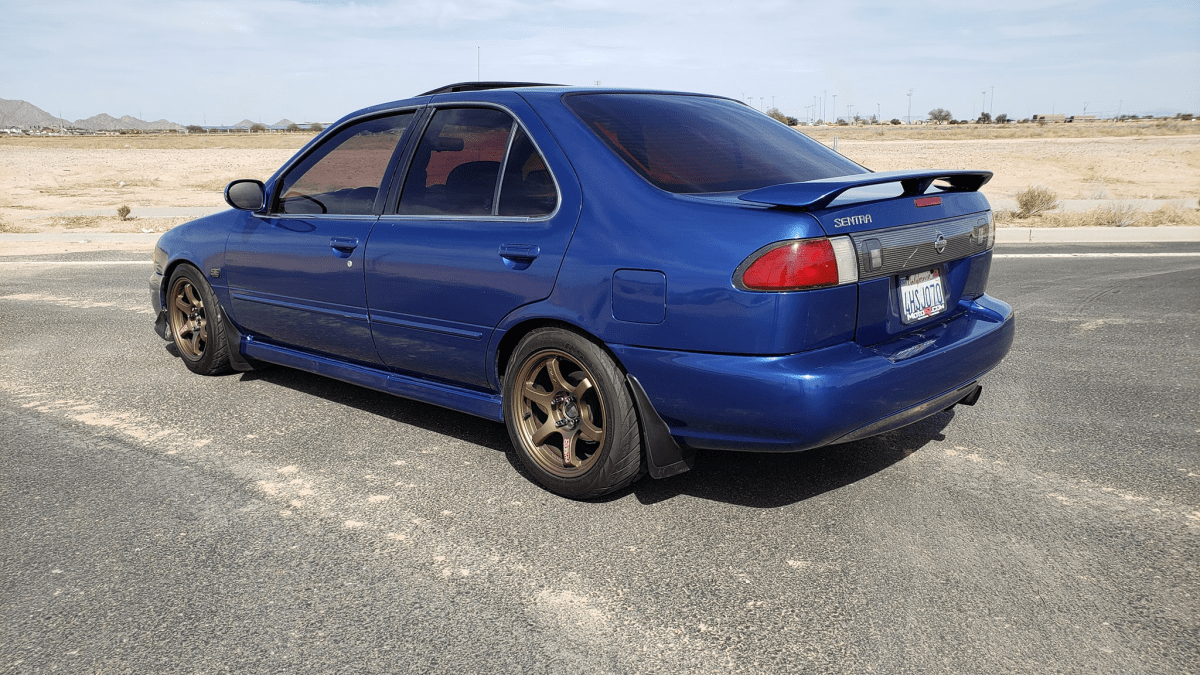 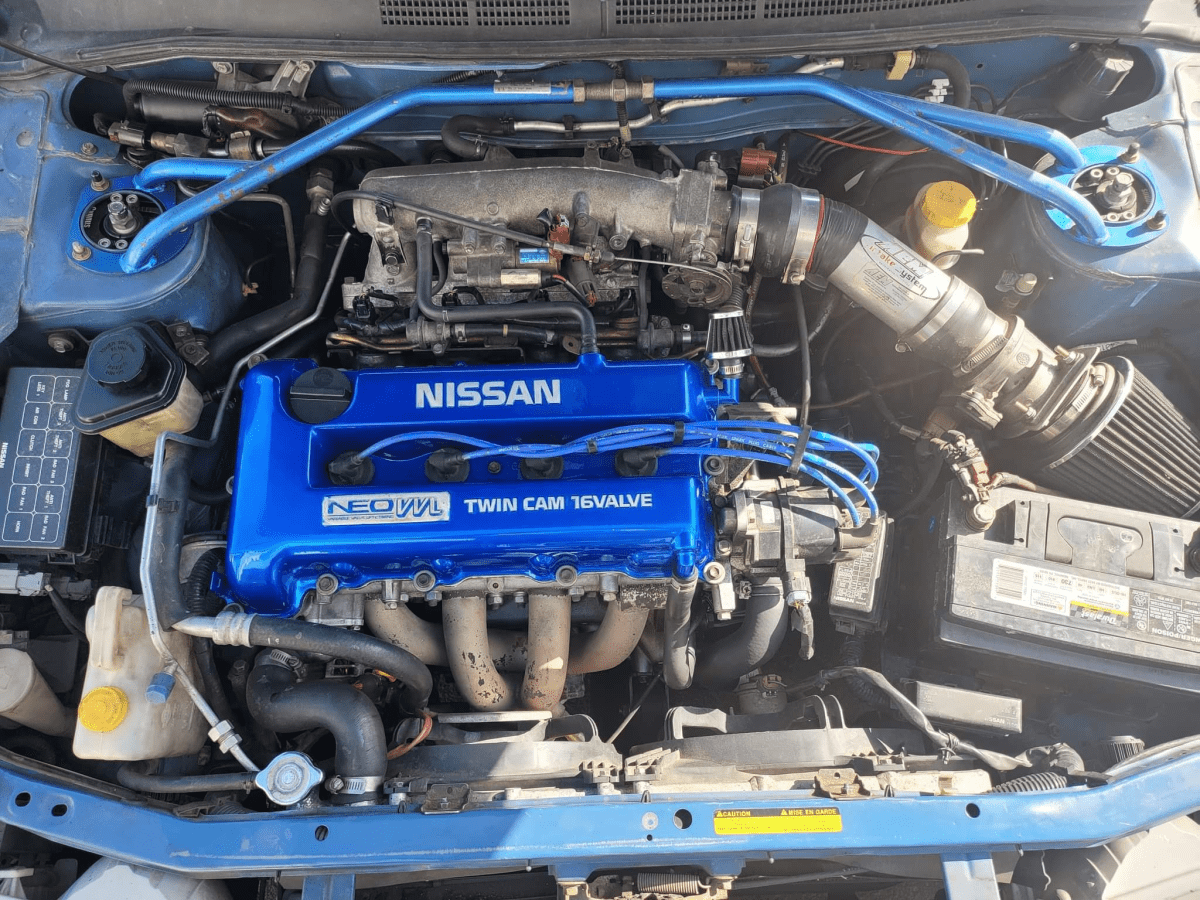 Car has been sitting in the garage for a bit as I've pulled the transmission out to do a few things. I'm converting the cable actuated clutch to hydraulic, which required removal of the transmission to change out the lever arm. As you can see the bellhousing was fairly nasty inside. Not sure where the fluid was coming from as the rear main isn't leaking. I'm hoping its not the input shaft seal as that requires separation of the trans case and my mechanic skills are not sufficient enough for that. My suspicion is that the distributor leak made its way down into the bellhousing over time.

So, I've cleaned it up and swapped out the lever arm to use with the slave cylinder. Installed one of the two new axle seals, then after I get the flywheel resurfaced and the new clutch arrives, the trans can go back in. I also need to swap out the high pressure power steering line with a braided line that removes the rat nest on the strut tower. 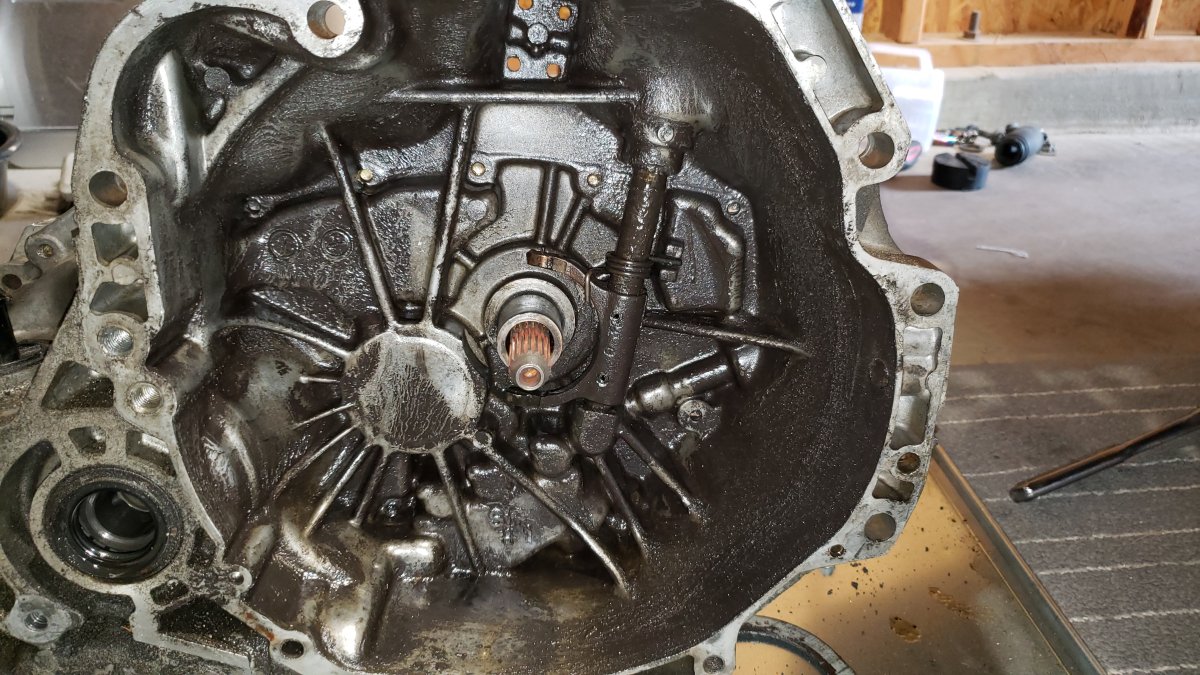 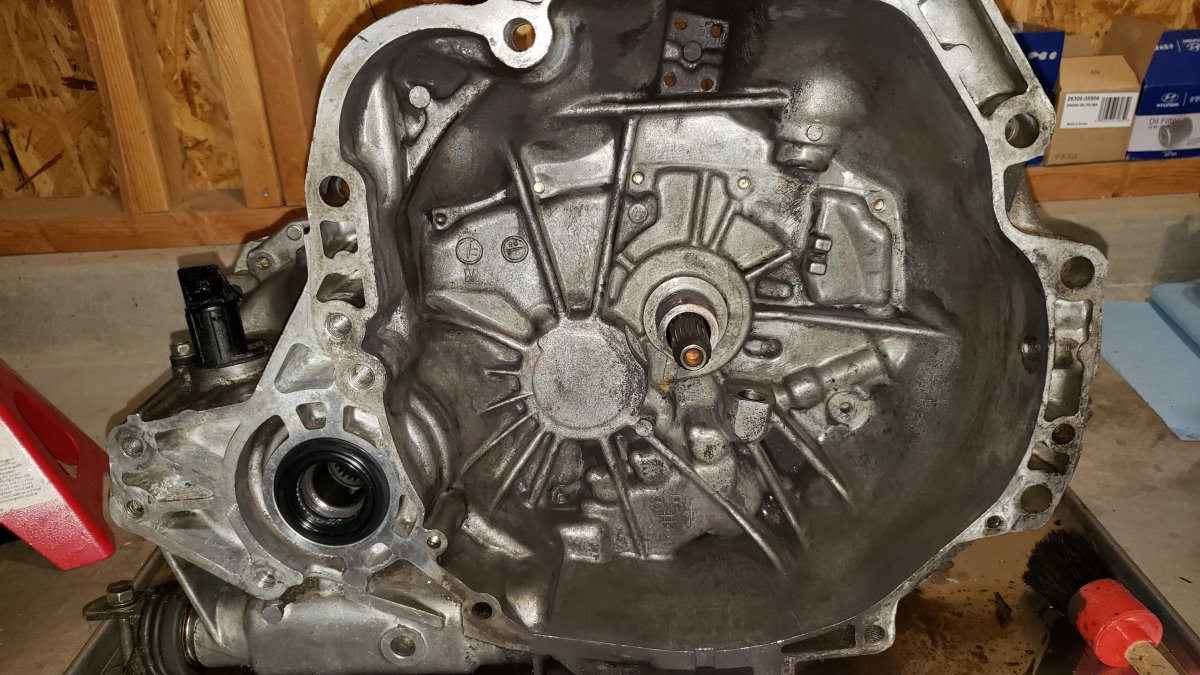 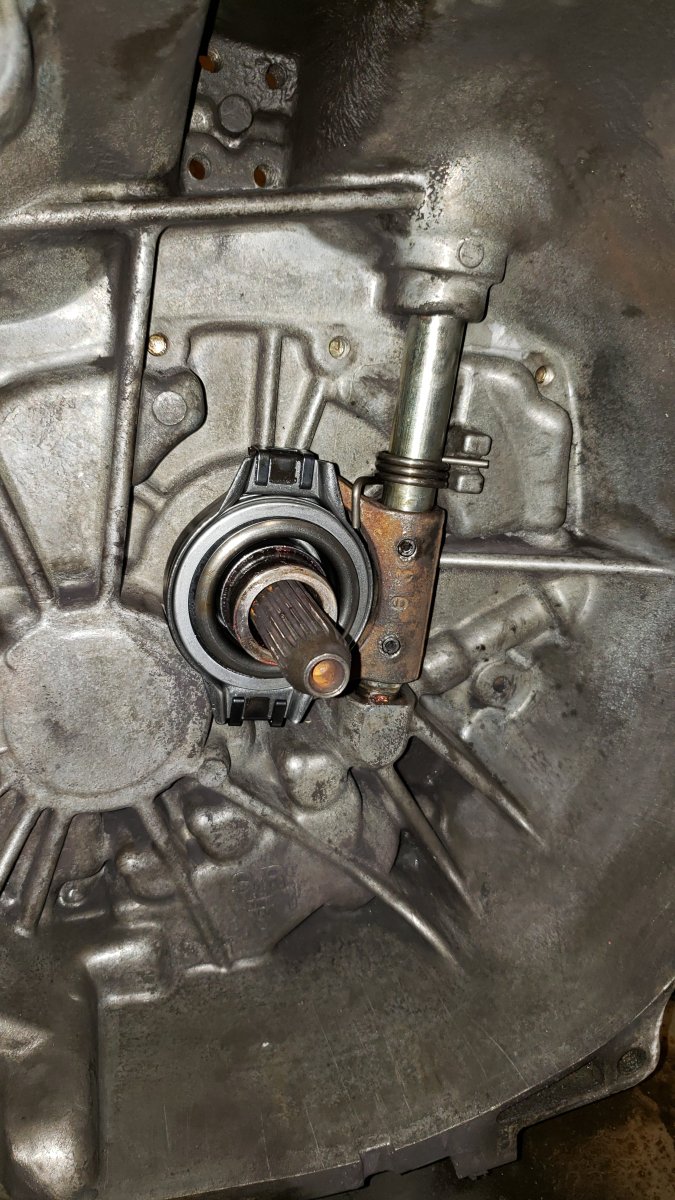 In the end I had the transmission input shaft seal and bearing replaced. Met a local guy that could do it and he offered so I figured I might as well so I didn't have to pull it out again. So I got that done, did a BUNCH of cleaning of all the oil residue that was under the car. I probably bought 20 cans of brake cleaner and went to town on everything I could see. Not the cheapest method but definitely the easiest, the oil residue just melts off of everything.

Have also made a custom battery mount/tray so I can use the small battery I had originally purchased for the Elantra. It can be mounted at any angle so I have it laying down. Installed a catch can, replaced the thermostat and installed silicone radiator hoses. Also re-wrapped most of the wiring with new electrical tape.

So all that is left is to refurbish the clutch pedal and install it along with the master cylinder since they install as a pair. Then I can tighten up the line and fill/bleed the system. Fill the power steering, change the oil and replace the spark plugs and we should be ready to start it up. 👍

Very close to being finished. Still having issues finding the right clutch pedal for the hydraulic clutch conversion. On my way to a junk yard soon to try something else. 🙄 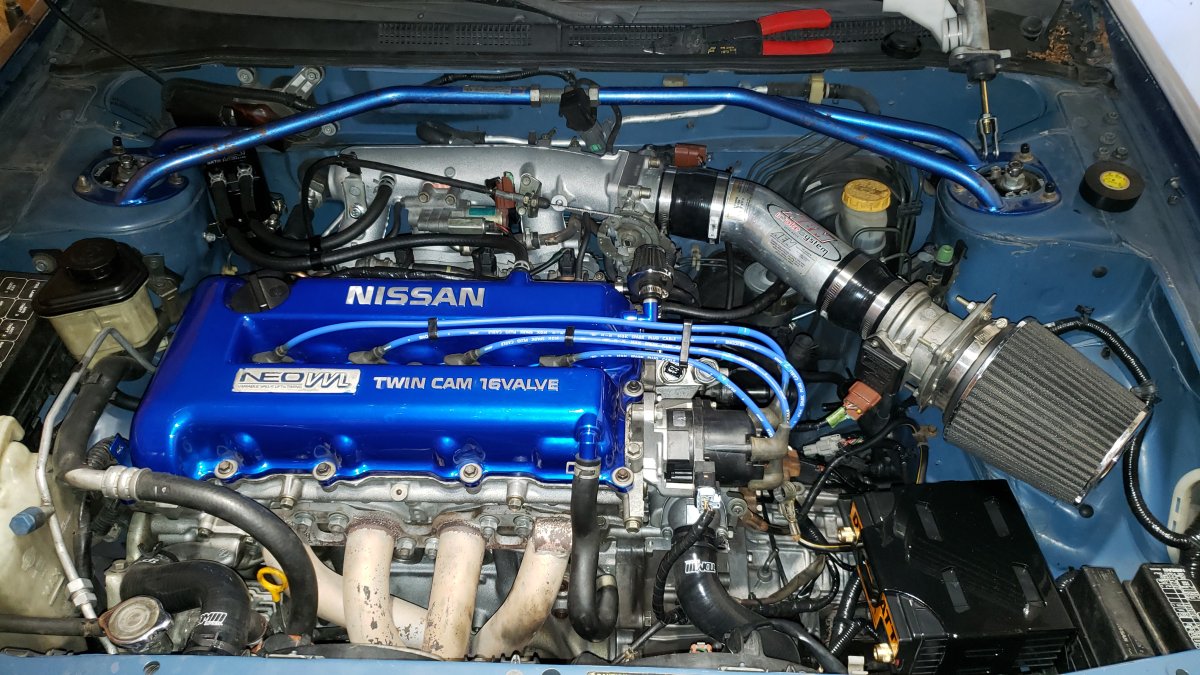 '97 Maxima clutch pedal on order. Slow going on that part unfortunately. In the meantime I finished up a few miscellaneous things. 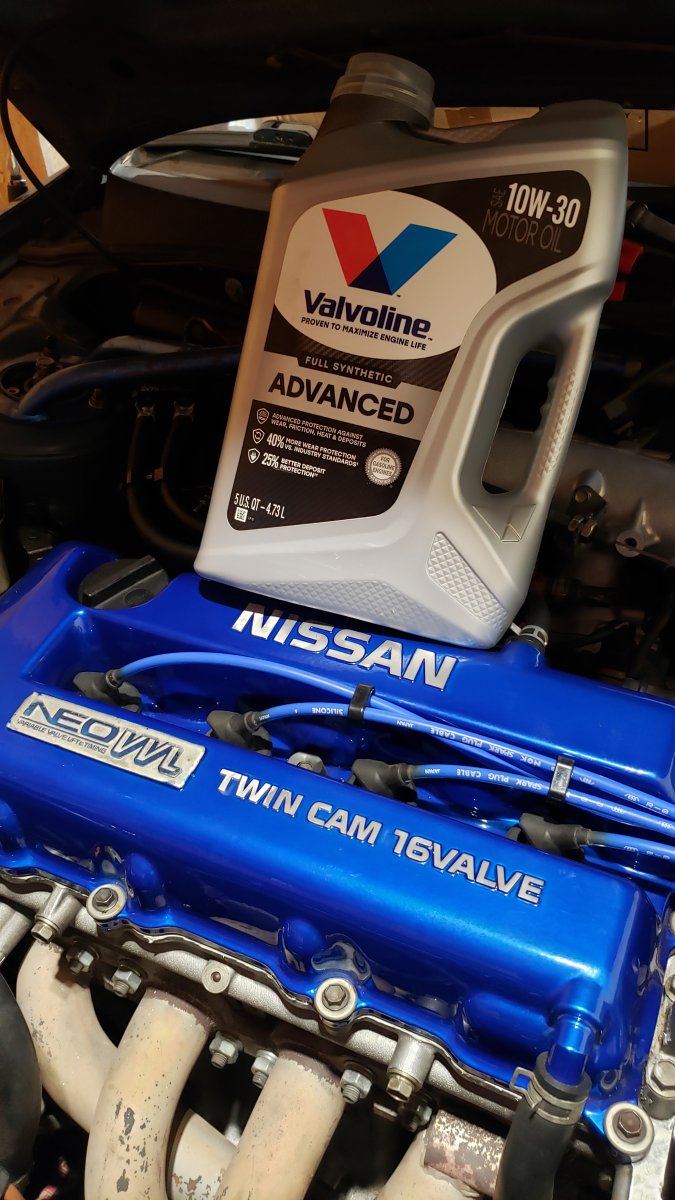 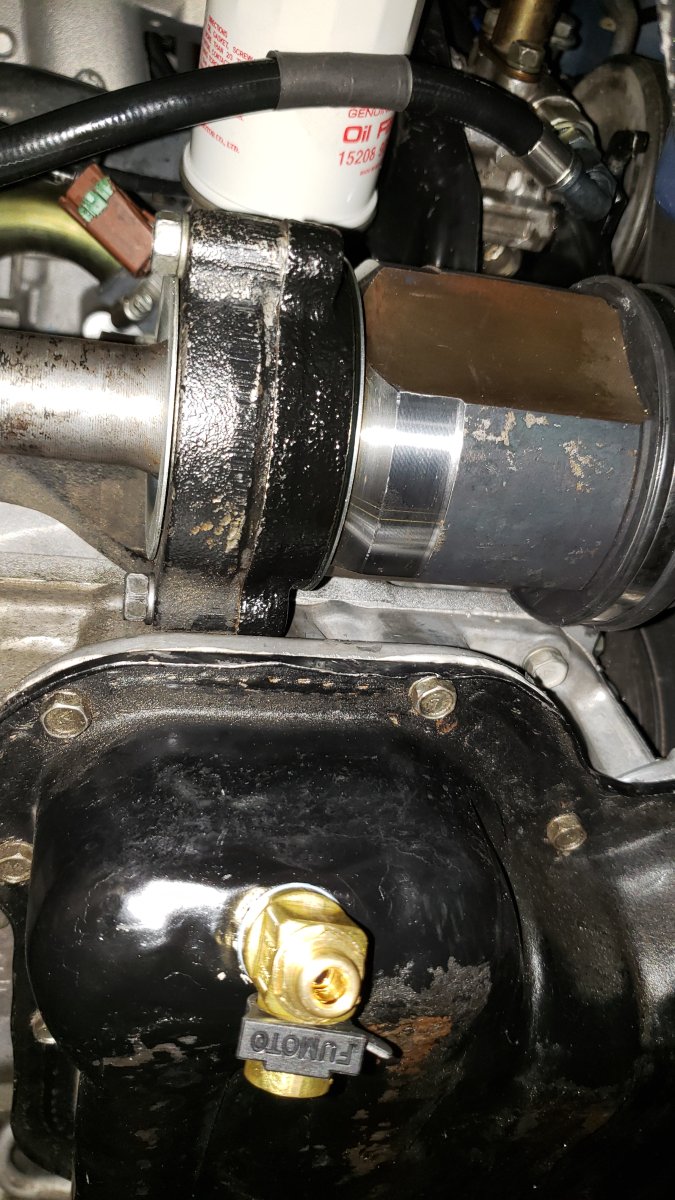 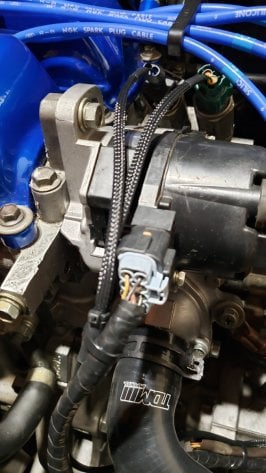 The car started on Sunday. No leaks that I can see. Fired up almost instantly, good sign of good compression. Topped off the fluids. Now I just need to sort out the clutch pedal (went with a '97 Maxima pedal) and figure out why the idle is surging when warm. Hopefully driving this weekend?
R

I picked up a Nissan Pathfinder yesterday and am loving it so far. It will be my daily driver, light off road, and tow rig. Its a 2006 SE 4WD with, get this, 68k original miles! The moment I saw it for sale I had to jump on it. Its in pretty good condition besides a scrape on the right front bumper corner. One of the fogs is broken and the oil pressure sensor needs replaced. (Fairly common I hear) Looking forward to having it around. How you see it is how I purchased it. I do have plans to remove all of the deflectors and rain guards, as well as the running boards. Then she'll get a 2" lift and some 33's. Leaving the drivetrain stock. Can't wait to go on some adventures. 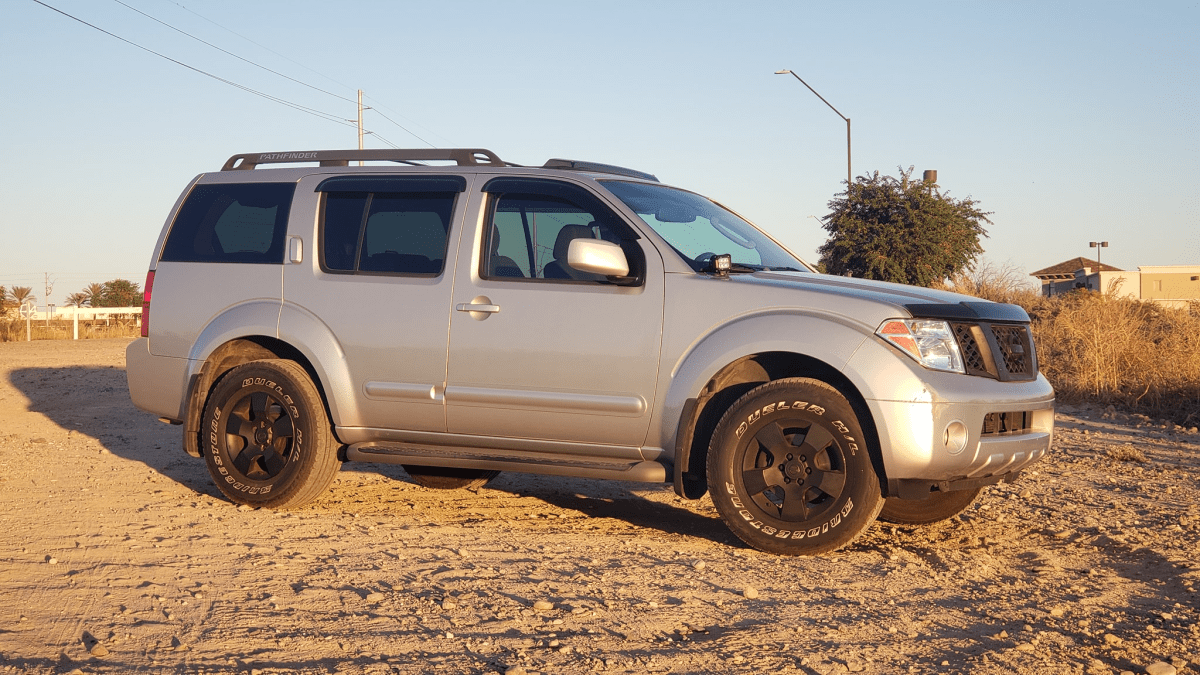 Progress! Removed a bunch of stuff from the Pathfinder that I didn't like. Also put some Yokohama Geolandar G015's on it in a slightly bigger size than stock. (Actually same stock size as Xterra Pro4X) 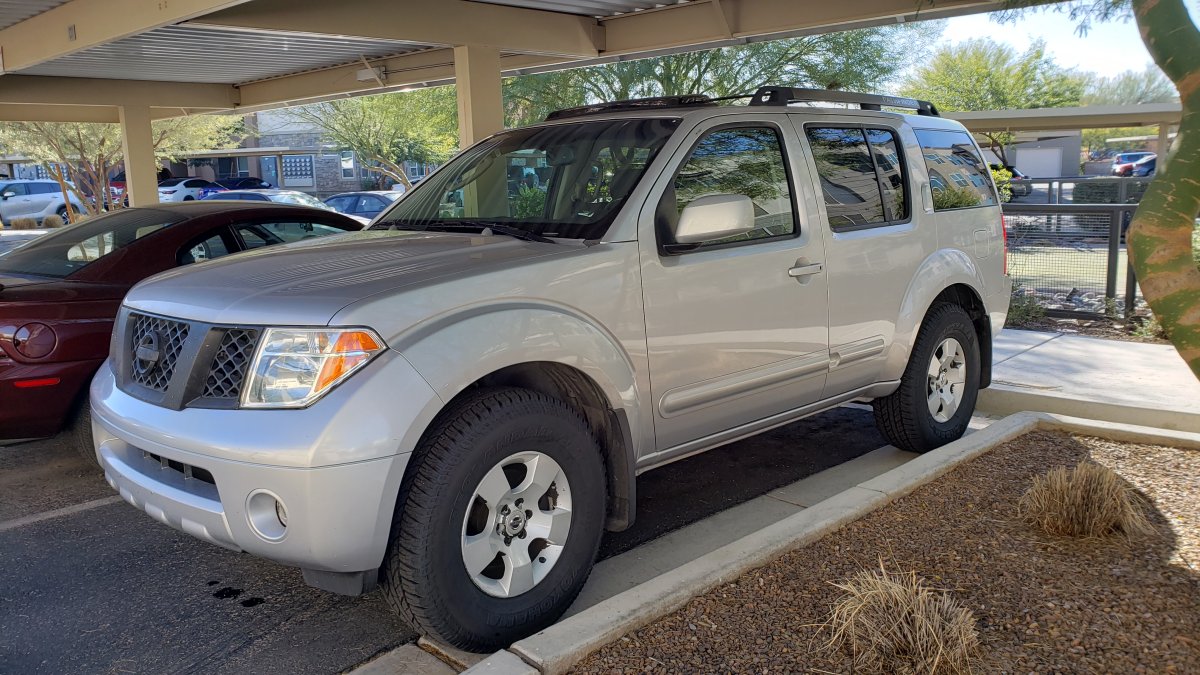 And took the Sentra out for a short drive. Still needs some work before I'll drive it long distances, but driving it does wonders for motivation. 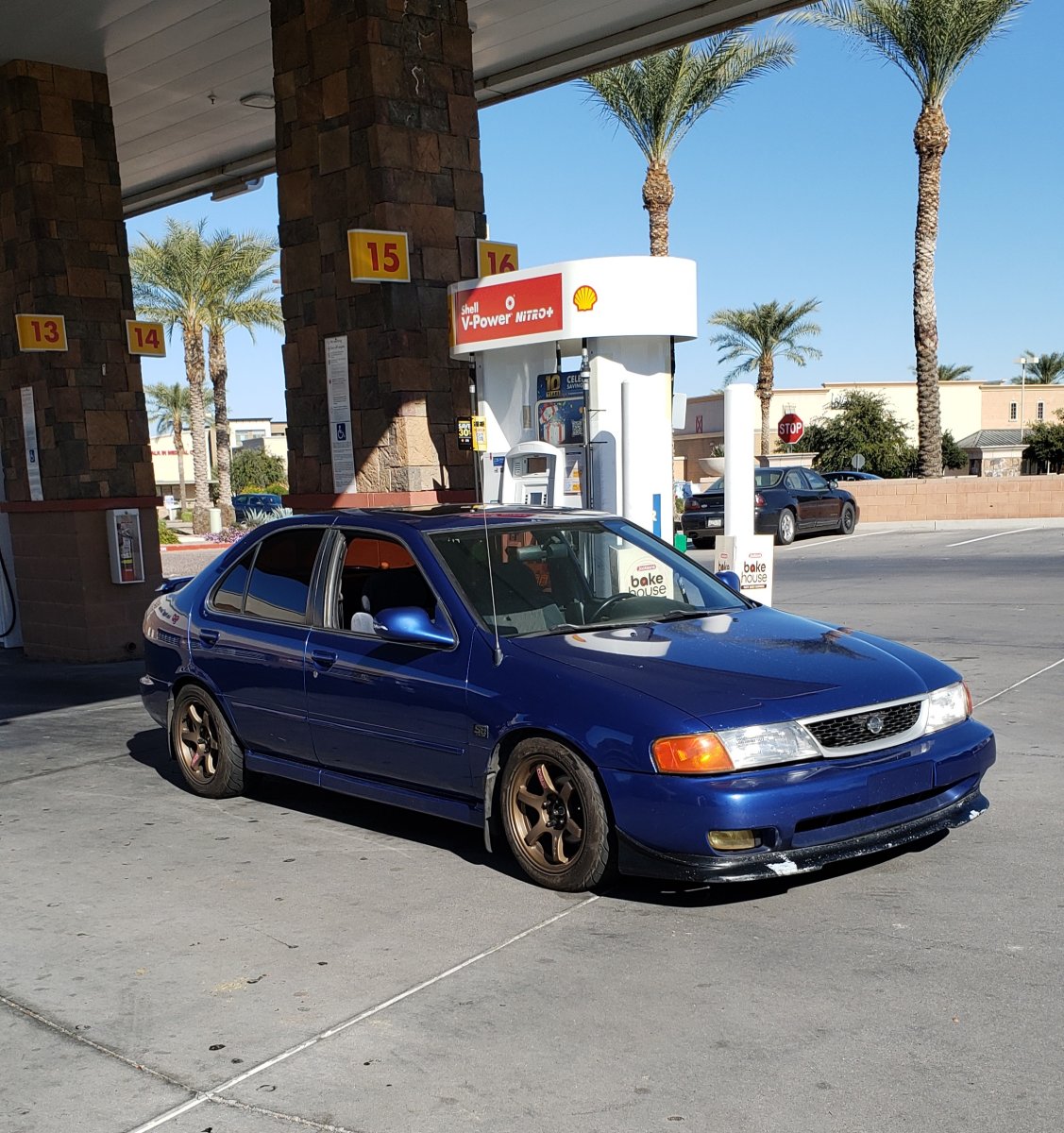 Have the Sentra up on jack stands right now while I do some things. I have new brakes arriving this week, new 70A durometer rubber (replacing the polyurethane) engine mounts are a work in progress (not cooperating) and I finally got the tie rod ends and new steering rack boots installed... 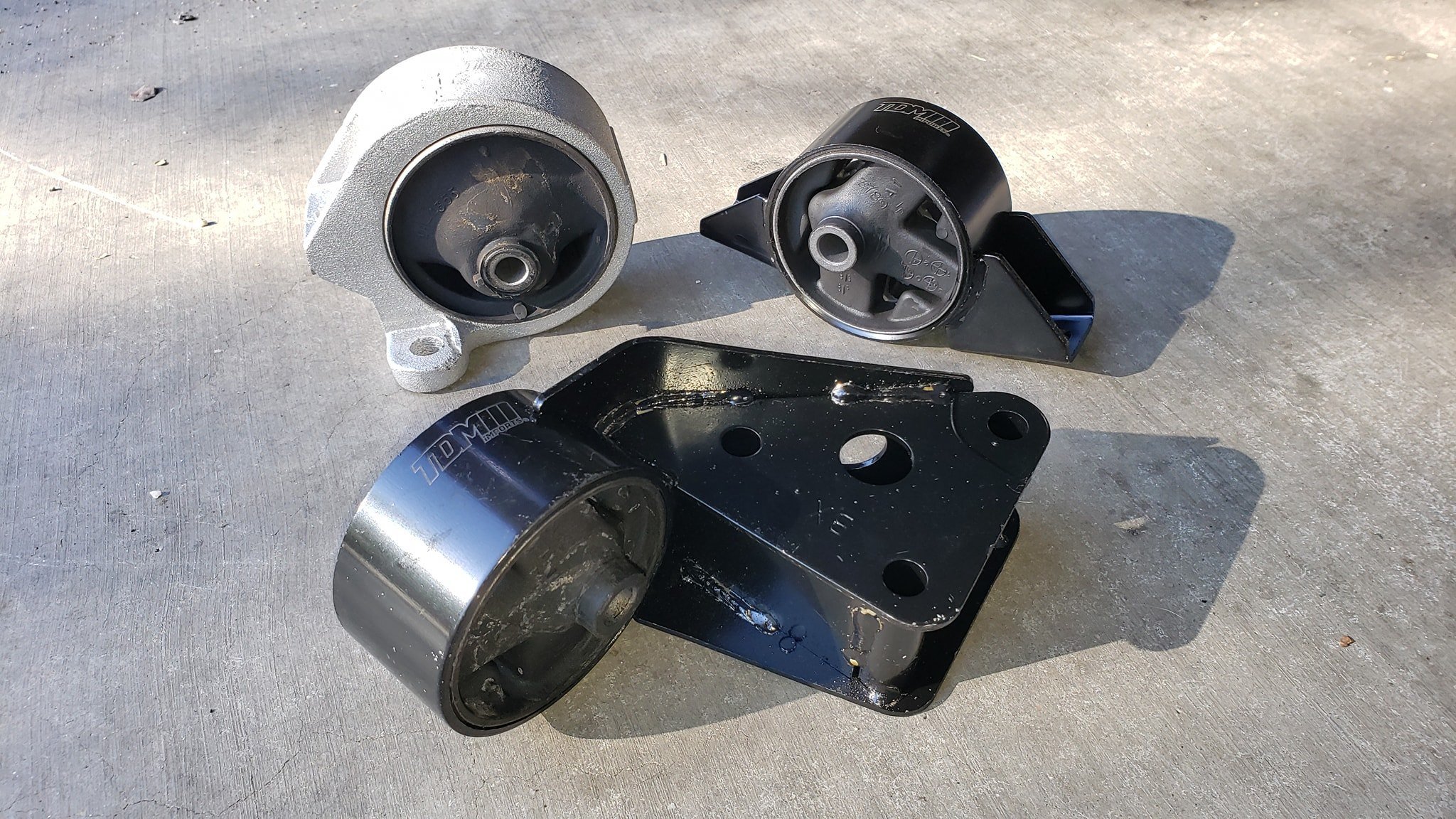 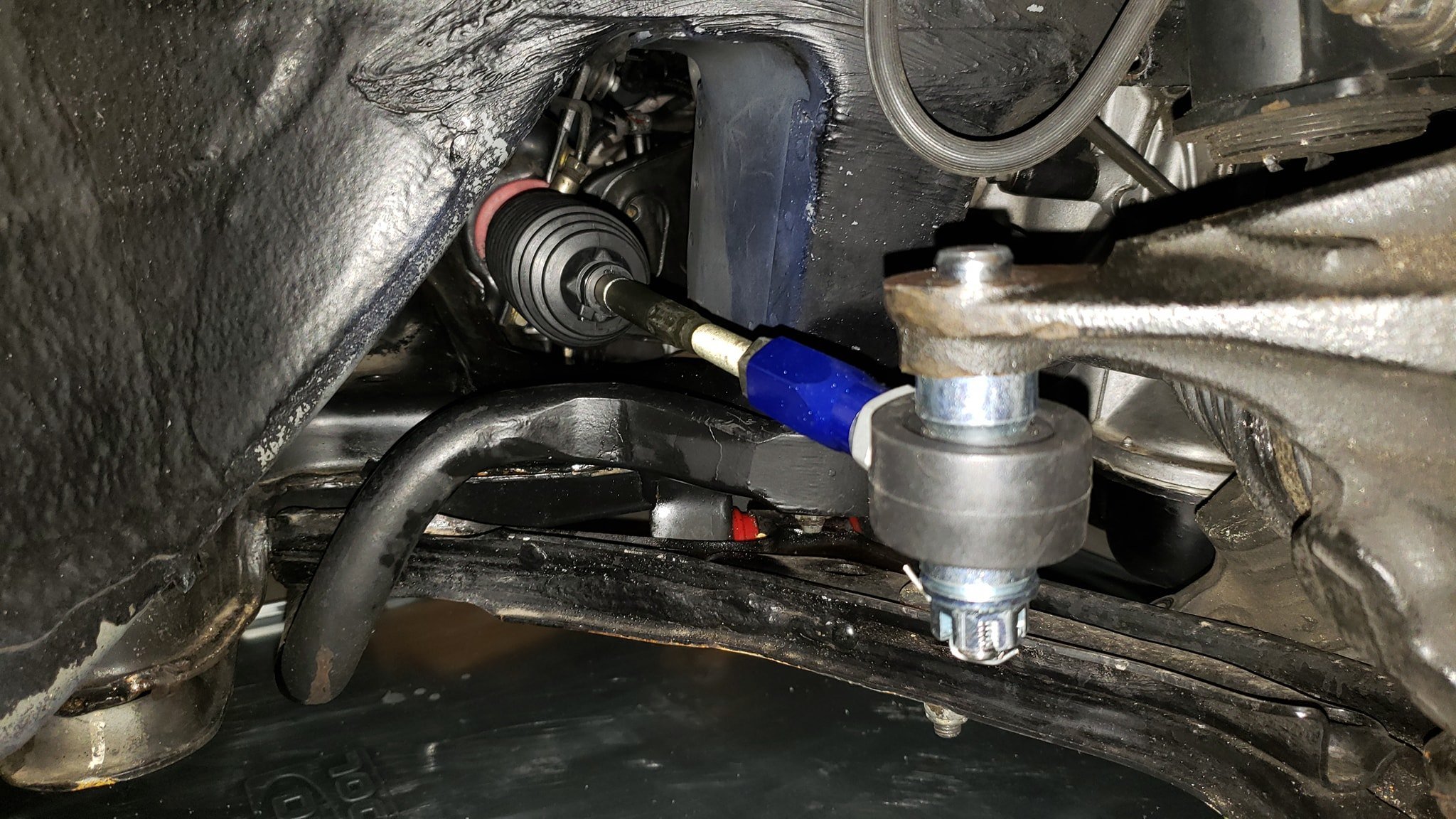 And I spent my Christmas getting this thing dirty. 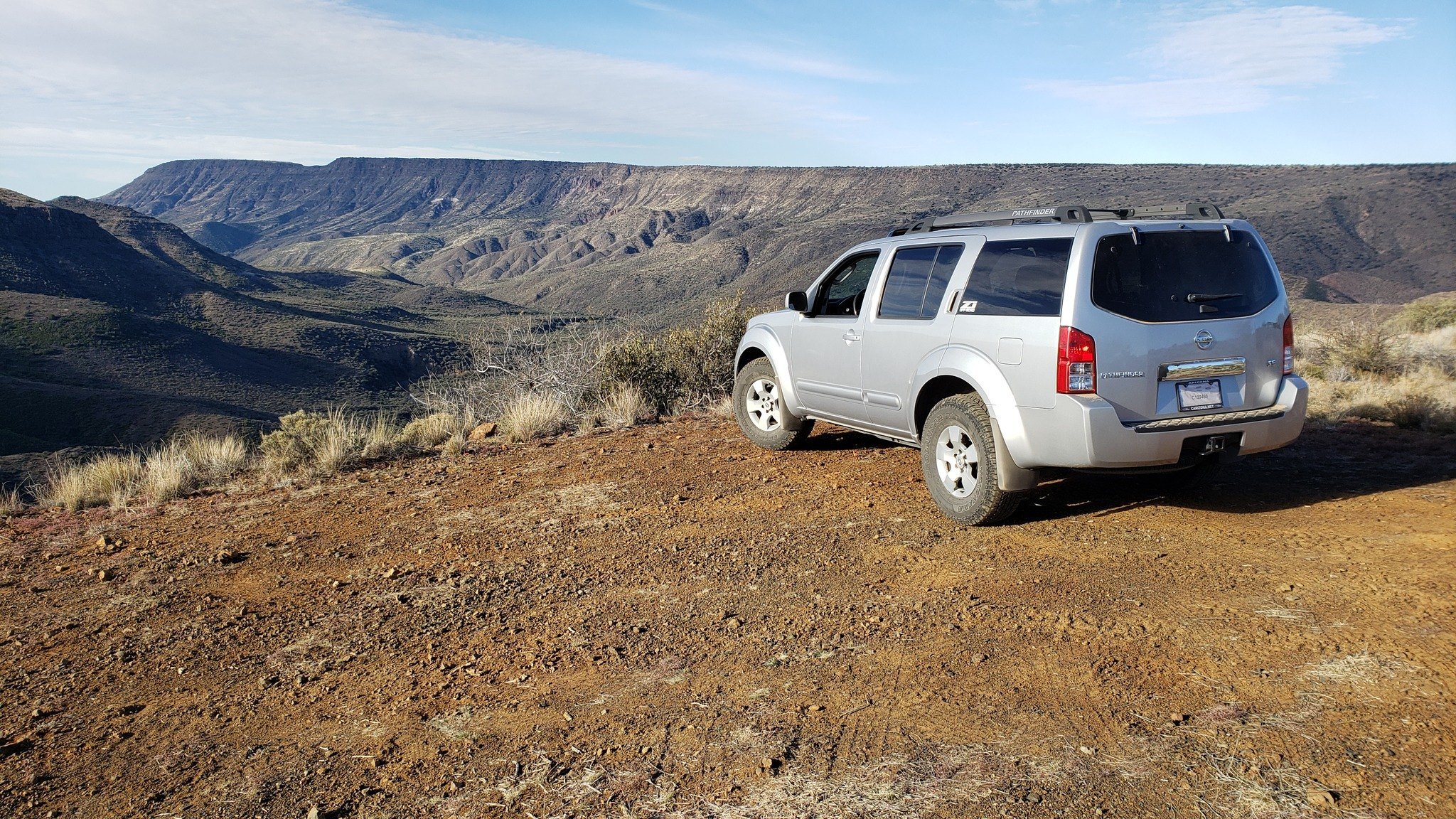