Anyone know if the Aftermarket custom wheel mounting adaptor for THRUSTMASTER add on wheel hubs from Ricmotech will work with a T300RS GT wheel?

I am aware that the right hand side with 4 buttons triangle,circle,cross and square will need to be modified I am more interested in the D pad side and the wheel mounting holes.

So what I'm really asking is will a wheel adaptor for Thrustmaster GTE, TM28, 599XX EVO Wheel fit on a T300RS GT wheel with mods?

From the photos it looks close.

Sorry for going on with this wheel topic but I can't seem to get it out of my mind!

It mentions those other rims because they have the buttons around the metal of the rim rather than inside it. And even on those rims with this adapter the d-pad ends up blanked off and unusable. With the RS rim, I think this adapter would only fit if a cut/hole was made in the adapter on the right hand side to clear the 'square' button (and maybe the triangle and cross as well), but the d-pad and other holes should be in the right places.

Here's a diagram I made when planning my mod (I drilled a Momo MOD31 to fit the GTE buttons, like this) with both sets of buttons shown (GTE and RS) and all other holes. It may help or it may not! 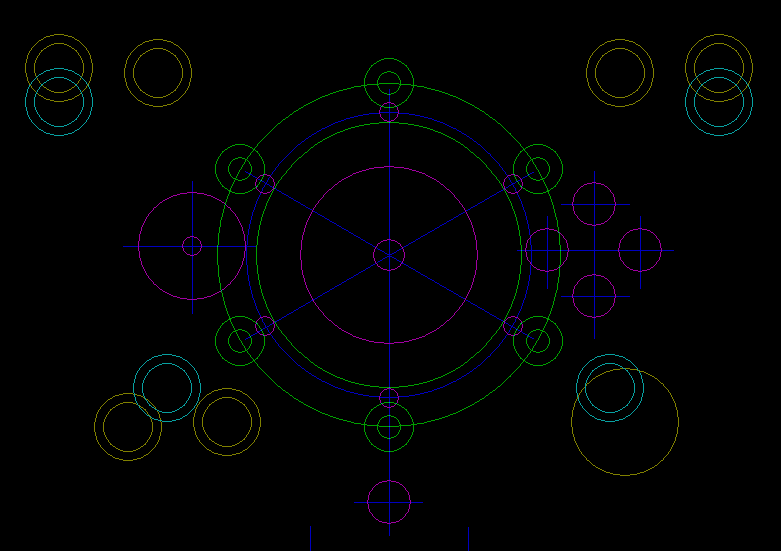 Another thing I notice is that the outer RS buttons (in cyan) aren't as far out as the GTE's, so most wheels might not easily leave those clear either.
Last edited: Dec 17, 2018

First I Thank you Very much for the diagram.

This is exactly what I was hoping someone else was thinking besides myself.

Your diagram will be alot of help working out which wheel will work, which is much better than guessing as I only have a T300RS wheel handy.

I will use the template to find a wheel suitable for drilling and will PM when I start.

I really like the idea of personally modifying my own wheel instead of buying off the shelf.

Maybe its the Christmas Elf inside of me !!!!

I've attached the KiCad project files for the diagram, if you get that loaded up you can turn layers off to get a template for either wheel, and hopefully print an accurately scaled template (you might need to tweak the scale, depending on your printer, I think there's a setting for it). When printing you need to select 'Single page', otherwise by default it prints each layer to a separate page.

The two vertical lines at the bottom of the diagram are what I used to align the template with the MOD31 rim, along with the centre hole

I'm reasonably confident that the holes for the RS buttons are in the correct place, but of course that hasn't been put to the test! I did go through a few iterations of printing the template and comparing it to the holes in the RS wheel though.

I don't know what equipment you have or have access to for drilling. I managed it with a handheld drill, but it was NOT fun! Very nerve-wracking. Decent hole saws are not cheap, although the larger central hole for the logo could be skipped if you were prepared to trim the plastic down on the RS wheel instead.

Without the adapter, I don't think a pre-drilled wheel could work OK (although it might, just). The smaller central green circle is the cut-out they have for a horn button, and it seems too close to the six holes (purple) needed to mount the rim to the button box. Also the chamfer on their mounting holes interferes. Hence why I chose an undrilled rim.

Proper rims are quite a bit thicker than the TM ones. My d-pad basically ends up flush with the metal, actually a little recessed on the left because the rim angles slightly up. It's usable but not great. So I'm not sure how usable the PS buttons on the right would be. This is where a cheapo rim could be better for this, by using thinner metal!

I would do the d-pad differently if I did it again. Instead of one big hole, I'd change it to four individual buttons because it's so annoying to accidentally hit the diagonal, and we never want that when driving. OTOH, it's easier to make one big hole and have it look neat than four smaller ones where any error would be quite obvious.

I would've liked to use the RS button box, but in the end it just looked like it would be tricky to do nicely, and have too many potential drawbacks. I got lucky and found a GTE wheel in Amazon Warehouse for about £40 or £50, and don't regret buying it at all.

One thing that's difficult about choosing a rim is telling just how flat they are, since we want it as flat as possible around the d-pad (and buttons, for the RS). With the constraints of being your desired diameter and style, undrilled, pretty flat, and clearing the outboard buttons, there probably isn't a lot to choose from!

Finally got some parts and most importantly found some time to start modifying my T300RS-GT wheel.

It's has been a long time coming and a lot of different ideas thrown around.

Just a teaser for today !!

R
Noob question. Can a button box be programed to work with PS4 Pro/GT Sport and T300RS wheel?