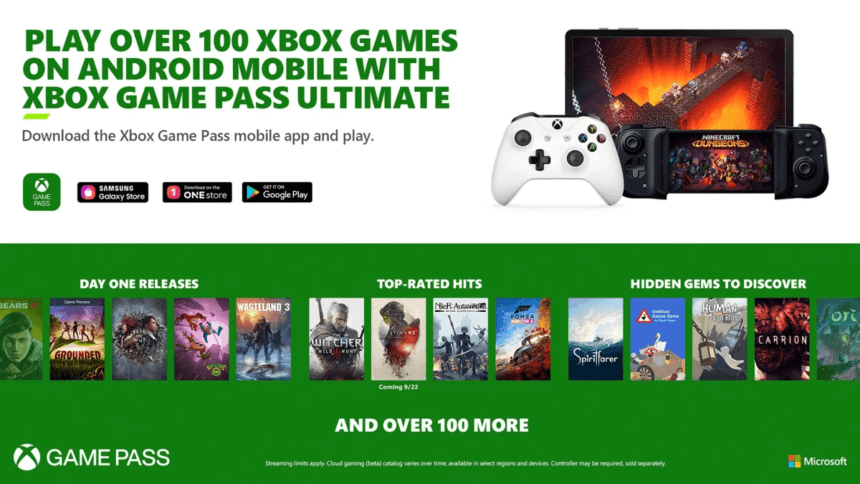 From September 15, subscribers to Xbox Game Pass Ultimate will have the ability to use xCloud on mobile and tablet devices. Currently, only Android users are able to download the Xbox Game Pass app from the Google Play store, and Samsung’s Galaxy Store.

Microsoft have confirmed that Game Pass users will have access to over 100 titles on xCloud at launch. Among the extensive list of titles are some highly rated racing games.

The biggest games in the launch lineup include Forza Horizon 4, DiRT 4 and F1 2019. Although not a racing game, Saber Interactive’s MudRunner is available for those who want to get down-and-dirty with off-road driving.

All titles on Game Pass Ultimate via xCloud will be available at no extra cost. Users on mobile and tablet devices will be able to access friends lists, achievements, voice and party chat, and other multiplayer features of the supported titles.

The xCloud service will be available to users in 22 countries at launch to ensure stability before any planned expansions. Microsoft also confirmed that EA Play will be integrated into Game Pass Ultimate with a target of Holiday 2020.

If you’ve been unsure about Game Pass Ultimate and are eager to jump in to xCloud, you can get your first month subscription for just $1, with the regular subscription price at $14.99 per month.

MicrosoftXbox Game PassxCloud
8 Comments Discuss this post in our forums...
Test Your Badge Knowledge With Our Car Logo Quiz

Gran Turismo Sport 791 Jan 18 by Andrew Evans
There’s a new set of GT Sport Daily Races this week, to tide us all over while we’re waiting for the next FIA season to start. The options are relatively…

Gran Turismo Sport 1788 Jan 17 by Andrew Evans
Polyphony Digital has announced that its flagship FIA Gran Turismo Championships series will return for another season in 2021. The announcement confirms that the championship will continue into its fourth…

Automotive News 71 Jan 14 by Andrew Evans
Toyota has become the first brand to reveal its Le Mans Hypercar in full. Sticking with Toyota’s naming scheme for its World Endurance Championship vehicles, but shaking things up a…