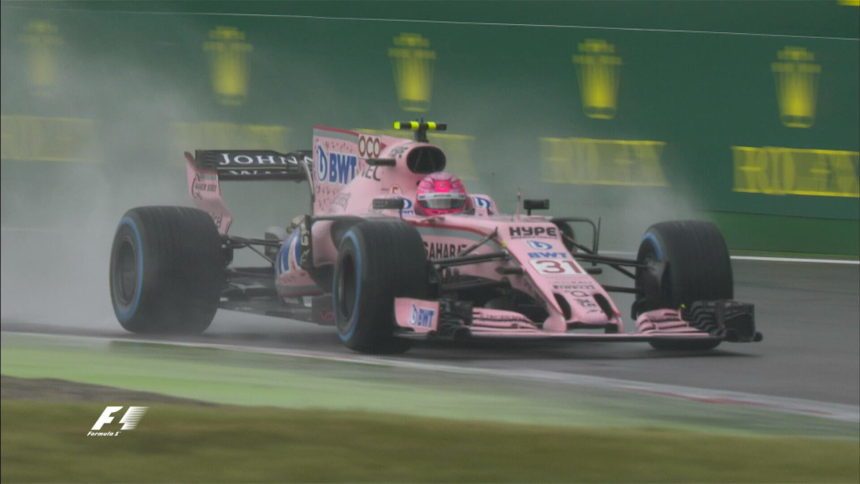 When it’s wet in Formula One we know that more often than not, surprises will rear their head. At Monza today, the wet conditions certainly added a layer of unpredictability to proceedings. Three hours and forty minutes of it.

The rain that started this morning was easing up before the session began. But just as the green light came on, the heavens opened once again. Romain Grosjean found himself as the first casualty.

It was heavy gloom for Grosjean as his car aquaplaned off the circuit at 145mph. On the pit straight. The wet weather tires shift around 13 gallons of water per second, but that wasn’t enough for the Frenchman. The session was immediately red flagged after just two and a half minutes.

After a whopping two hour and forty minute delay, we got underway again. A drying track is always fun to watch. Who makes the call to switch to the Intermediate tires first? When is the crossover time? Fortune certainly favors the brave.

Predictably — with nothing to lose — Fernando Alonso bit the bullet first and led the charge to change to Inters. But nobody went significantly faster. The drivers struggled to get the tires up to temperature in the wet conditions. Therefore the first part of qualifying ended with most of the usual suspects going out.

But as the session went on and the world’s most expensive vacuum cleaners began drying the track, the Inters emerged as the preferred choice. The eyebrow raisers were Stoffel Vandoorne making it into Q3 and Nico Hulkenburg being knocked out.

The skies began hemorrhaging just as the third and final part of qualifying began. The conditions were improving all the time, as were the lap times. Lewis Hamilton ultimately took pole by a massive margin of 1.5 seconds. It was his 69th pole position, finally beating Michael Schumacher’s historic record — a record many people thought would never be broken. And he did it in Schumacher’s old backyard.

If he was going to beat the record, this was one of the most iconic ways he could’ve done it. In the wet it’s all about bravery, feeling the car underneath you. You drive based on feel. The drivers almost have a sixth sense when finding the grip. Qualifying is all about becoming one with the car — Lewis did that better than anyone else for the 69th time today.

Joining Lewis on the front row? The Williams of Lance Stroll, who himself now holds a record. The Canadian rookie is the youngest ever driver to start on the front row of the grid at 18 years, 309 days. This was the first time he’d ever driven an F1 car in wet conditions. The surprises don’t stop there.

The Ferraris start seventh and eighth at their home Grand Prix. In front of the famously fanatical Tifosi, the pair of prancing horses strangely couldn’t find the grip. All of the Ferrari top brass was on hand to see its cars get out-qualified by customer Mercedes teams with less than half the budget. It’ll be dry tomorrow so expect at least one of the red cars to make it onto the podium.

The Red Bull pair actually had a very impressive qualifying. They put their cars in second and third on the grid. But engine penalties mean that these positions are negated, promoting Lance Stroll onto the front row and Esteban Ocon of Force India up to third.

With dry conditions expected tomorrow, the race itself may return a sense of normality. Lance Stroll and Esteban Ocon will have a lot of work to do if they’re to hold off the works Mercedes of Bottas. Oh, and the small problem of two angry Ferraris looking to scythe their way through to the podium in front of their home crowd. 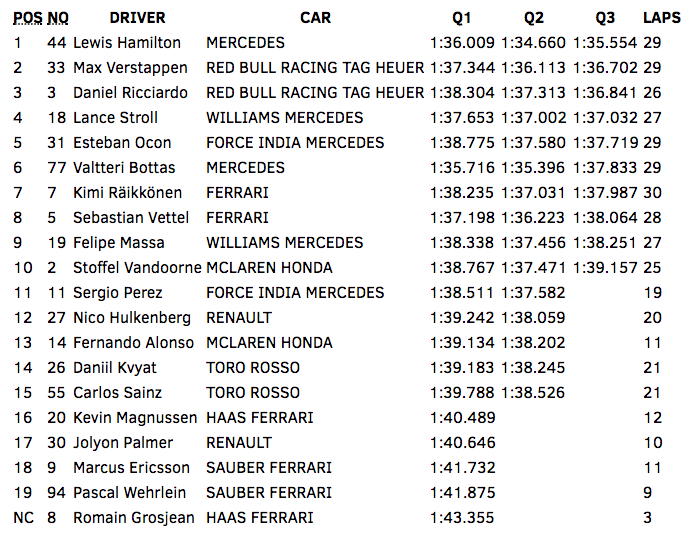