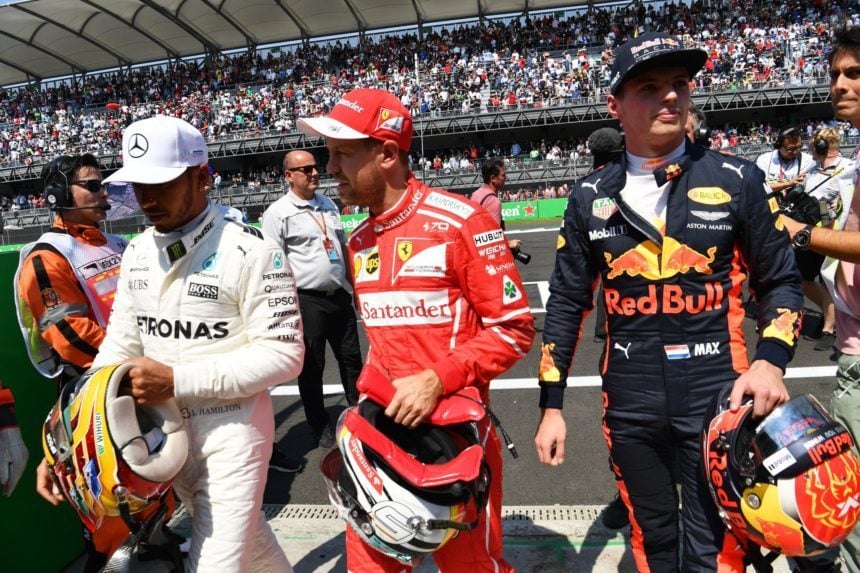 With Lewis Hamilton only needing to finish 5th or higher in the race to clinch the championship, the stage was set for possibly the finale of this year’s title fight. This year’s battle has been one of the most exciting we’ve seen. Two different drivers of two different nationalities in two different teams. Head to head.

While Lewis Hamilton and his Mercedes team have run riot in the second half of the season, Sebastian Vettel and Ferrari still had a mathematical chance to keep the title race going heading into the Mexican Grand Prix. Vettel gave himself the best opportunity to do this by putting his Ferrari on pole yesterday in qualifying. This next chapter in this storied season might be one of the most exciting yet.

Lap 1,000 of the 2017 Formula One season got underway in controversial and calamitous fashion. Verstappen and Vettel duked it out into the first chicane, going wheel to wheel through the twisty section. The young Verstappen got punchy and reaped the rewards: the Dutch ace got his elbows out, surviving a potential puncture and emerging in the lead of the race. He didn’t seem to be bothered that the two drivers fighting for the world championship were right next to him — the absolutely correct attitude to have.

Hamilton took this opportunity to try and seize second place from Vettel but the move would backfire. As Vettel let Verstappen go, he oversteered into Hamilton’s right rear tire, instantly causing it to puncture. Vettel’s front wing also took significant damage from the impact.

Hamilton questioned whether the move was deliberate from Vettel, as did many others on social media at the time. But for Vettel to try to deliberately affect Hamilton’s race would have compromised Vettel’s race, too. The stewards correctly deemed it a racing incident and the race continued with a jumbled order. Drivers that are normally in the mid-pack or out of the points ended up in very advantageous positions. Esteban Ocon sat in third, Nico Hulkenburg in fourth and Marcus Ericsson found himself in ninth position respectively.

Vettel came into the pits first for a new front wing. It was an awkward change in a pit stop that cost the German a huge chunk of time. But not as much as Hamilton, who trundled into the pits some 20 seconds later with a flat tire. Hamilton’s pit stop was also extended as his mechanics checked his car for any further damage from the clash with Vettel.

So by lap two Sebastian Vettel and Lewis Hamilton — the two title rivals who’d battled it out all season — were 19th and 20th. Second to last and last. You just can’t make this up sometimes. With both drivers way out of the points, the permutations stated that Hamilton was still on to win the title. In the least spectacular fashion possible.

Later on in the race, more pain was being shovelled in the direction of Hamilton in the form of blue flags. For the first time since Spain in 2013, Lewis had to let the leaders through; Max Verstappen on lap 22, then his team mate Valtteri Bottas on lap 25. Having lapped so many people in his 10-year career, Lewis was humble when the tables were turned and he easily let both drivers through.

By lap 27, Sebastian Vettel had made it back into the points. The four time world champion needed at least second place to keep his title hopes alive and he was on the charge. Hamilton meanwhile was noticeably more reserved. It took the British driver around 25 laps to simply pass Carlos Sainz for 17th place.

Of course, the high altitude of the Autodromo Hermanos Rodriguez made passing more difficult. There’s 22% less air available to help with passing and also keep the cars cool. The one thing Hamilton didn’t need was mechanical failure. Damage limitation didn’t work on lap one but it was the Mercedes team’s applied philosophy throughout the rest of the race.

Vettel stormed through the field, aggressively passing others to try and get as far up the grid as possible. His Ferrari team put the grippy Ultra Soft rubber on in the next pit stop to keep the German on maximum attack.

On the other hand, Hamilton took his time passing others. Not really diving up the inside, often holding back on overtaking moves. His team fitted the slower but more durable Super Soft tires in his pit stop. The contrasting strategies of the rival teams were on full display.

However, Hamilton wasn’t so reserved on lap 59 when he came up against his former rival Fernando Alonso. Lewis had to pass his former team mate for ninth place to cover off any advances from Sebastian Vettel further up the road. If Vettel could get into second, Hamilton needed at least ninth. But predictably, Alonso didn’t make it easy for Hamilton.

In front of a portion of the 115,000 fans on hand at the Autodromo Hermanos Rodriguez, Hamilton tried to pass Alonso around the outside of the turn two chicane. Alonso hung him out to dry as the cars touched, carbon fiber flying into the air. Taking a massive risk with his title on the line, Lewis managed to pass Alonso but it all could have ended in tears.

But by the end of the race, it was tears of joy for Lewis Hamilton. With Vettel only recovering to fourth, Hamilton’s ninth place finish was more than enough to secure him his fourth world title. The first half of the season was very close between Lewis and Sebastian. But after the summer break, a combination of the Mercedes team finding something extra and some poor luck for Ferrari meant that the momentum swung firmly in Hamilton’s favour. Vettel’s performance in today’s race meant he took home driver of the day honors, a small consolation for a man that can no longer fight for this year’s title.

Max Verstappen won the race but the feat was understandably overshadowed by Hamilton’s achievement. Props to Max for driving a stellar race. The flying Dutchman was excellent off the start and controlled the pace out front for his second win of the year.

But a future world champion had to take a back seat to a new four time world champion. The baseball stadium that makes up a portion of the final sector of the track was the perfect setting for Lewis Hamilton as he was congratulated by hundreds of fans.

Hamilton joins Sebastian Vettel and Alain Prost as four time world champions with only the great Juan Manuel Fangio (5) and the impeccable Michael Schumacher (7) ahead of him. Lewis also overtakes Sir Jackie Stewart as the most successful British Formula One driver of all time. After taking the record for all-time pole positions earlier this year, it was another piece of history that Hamilton has rewritten in his illustrious career.

With two races to go, there are still bits and pieces up for grabs. The constructor’s championship battle still rages in the midfield. Valtteri Bottas still has a chance to nab second place in the driver’s championship from Sebastian Vettel. What a story it would be if after so comfortably leading the championship early on, Vettel doesn’t even finish the season as runner up. 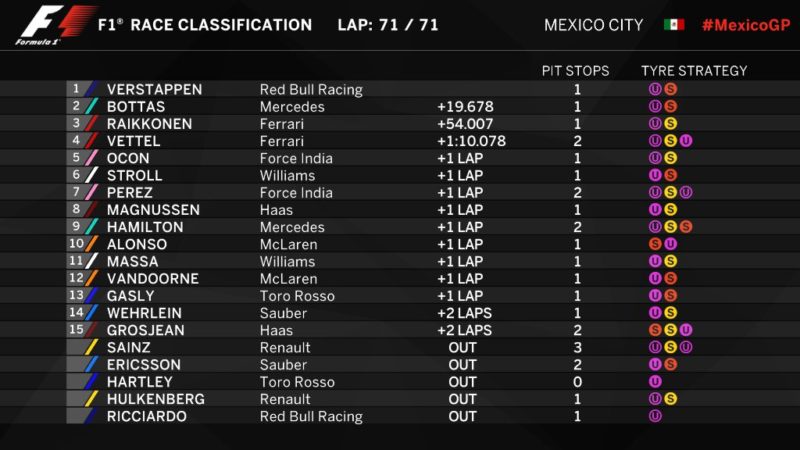 F1 2017 Season
260 Comments Discuss this post in our forums...
Test Your Badge Knowledge With Our Car Logo Quiz