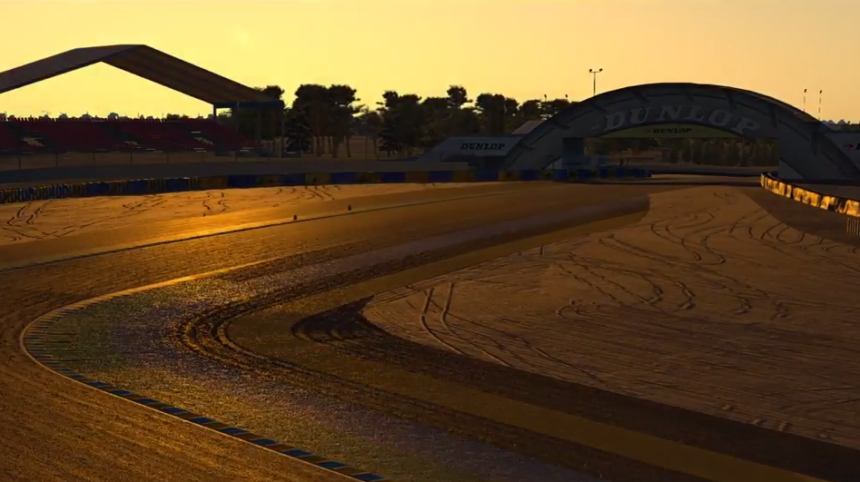 It’s official: day-to-night transitions are coming to iRacing. A short video on the official Youtube channel confirms it, though that isn’t the only improvement coming to the service.

In the video’s description, the developer (IMS) stresses that the teaser footage utilizes a clear sky model. Why is that? Because IMS is also working on volumetric clouds and dynamic exposure.

To explain why volumetric clouds matter, we first have to explain that track temperatures can change a lot in iRacing. A clear sky should provide a generally warmer racing surface, which is (usually) better for the cars. But when big, sun-blocking clouds roll in, they can significantly cool the track. Or at least, parts of it.

That’s where dynamic exposure comes in. As the clouds expand or contract in the sky, shadows will change on-track. Maybe that first turn was in the sun when you started the race, but after a few hours, you find it in the shade, and grip is noticeably different because of it.

This gets compounded by the addition of the dynamic time transitions. The sun’s angle will also affect the cloud coverage, and in turn, track temperatures. It all adds another layer of complexity to proceedings, but also more strategy.

Plus, this should finally put an end to one of the more awkward situations in the long-running simulation title: running endurance races with a static time of day. The jump up in realism and immersion should be significant.

So When’s It Coming?

Sadly, we don’t know. The video only states that the work is “in development”. iRacing already received a dirt-racing upgrade earlier this year, and Rallycross is set to arrive later in 2017. If we had to guess, we’d wager on a 2018 launch, unless IMS can have it ready alongside the Rallycross content.

With this news, iRacing joins the increasingly numerous ranks of titles with the feature. Project CARS 2 does the whole dynamic time thing, with the added bonus of weather seasons. The Forza franchise will finally be adding it to the Motorsport games this October with FM7. Meanwhile, the two PS3-era Gran Turismo titles both had it, though the upcoming GT Sport will only feature pre-set times of day.

Forza Horizon 4 23 Sep 25 by Michael Leary
Earlier this summer we reported on how Forza Horizon 4 will take advantage of the Xbox Series X, when the console launches in just over six weeks. FH4 will use…

Gran Turismo Sport 116 Sep 24 by Andrew Evans
Players waking up to GT Sport this morning will find a fresh set of Time Trials starting today, to challenge them over the next two weeks. It’s a mixed surface…