ZedNinetySix
20 seconds ahead of the game
Click to expand...

Well, 20 seconds ahead of us, as you finished ahead of us all in this round.

The 10th round from Rally Austria will be starting in this monday (September 23rd) and it will end at this sunday (September 29th) at 23:59 GMT. The track is Fisherman's ranch and the rally is set to 3 laps long.

And also, Pedro Harsk might be crowned as 2019 International Rally Champion and become the first driver ever to achieve "back to back" titles in IRC. For this to happen, he must finish in the podium or then ahead of Joey Rumoro at least.

This updated BoP will be used for the rest of 2019 season.


The Rally Organisation is looking forward to see you on the track for Round #10.

Here are the Round #10 results, as it follows:

There was some trivia during the Round #10:
- @ZedNinetySix has achieved his 3rd win of the season on his career, thus giving the 4th win of the season for Toyota;
- @Harsk100 has made history with Ford. Even winning his first International Rally Cup for Senior Drivers (he had won International Rally Cup for Junior Drivers in last season), he also becomes the first driver ever to win back to back titles in IRC. He also wins the R1 Class Championship in that round;
- @Obelisk achieves his 4th win in a row for R2 Class, thus becoming the first driver ever to have 4 wins in a row for Class R2. If all goes well, Obelisk might win the R2 Class Championship with 1 round to go in the next round;
- @RoadRageDudez is the 2019 Independents Cup winner. Zephan Richfield still had a chance to win the Independents Cup, however, his team was renamed following Diya Richfield's arrival and was therefore not eligible for scoring points for Independents Cup in this round;
-@ss3 wins the 2019 International Rally Cup for Junior Drivers with 2 rounds to go. Despite of having only 2 wins in this Cup's season, his consistent results allowed him to be champion with 108 points clear of current runner-up driver, Trevor Holden. Joey Rumoro is also crowned as a Under-21 Champion for the second time in a row (he won both Under-19 and Under-21 Championships in last season). He might secure the second place in the championship standings in the following round... For this to happen, he only needs to finish ahead of Christianne Harsk;
- Diya Richfield has become 2nd female driver competing in this season, by debuting on Round #10 with a 10th place finish overall and 2nd between the drivers competing in the International Rally Cup for Women Drivers;
- @epic_apri_39 saw his team being crowned as 2019 International Rally Cup for Roadgoing Cars Champion of Teams. However, he did not win the drivers title yet, since his 2nd place has delayed his drivers title and the manufacturers title for Alfa Romeo (Obelisk still has the chance to win the Cup). To Luke win the International Rally Cup for Roadgoing Cars, he needs only to finish 7th or higher. To Obelisk win the International Rally Cup for Roadgoing Cars, he needs to win the two last rounds, while Luke must not score more than 4 points in two following rounds;
- @Mikhail24RD's hopes for Under 22's title are still alive: He won the category in this Round and managed to tight the gap to Emil Vemppu Lutku, who did not compete in this round. Alexander Erhart's absence in this round costed him the Under 22's title, as if he would win in the two following rounds, the wins would not be enough for the title. If Mikhail and Emil would not attend the two following rounds and even if Alexander Erhart would win the two following rounds, he would still lose the title due to the number of rounds that the drivers had attended;
- Ford did not guarantee the manufacturers title in IRC yet. @Chymical's 2nd place finish keeps the Manufacturer's title hopes alive for Mitsubishi, which the Japanese team still has a chance to win the Manufacturer's title over Ford. 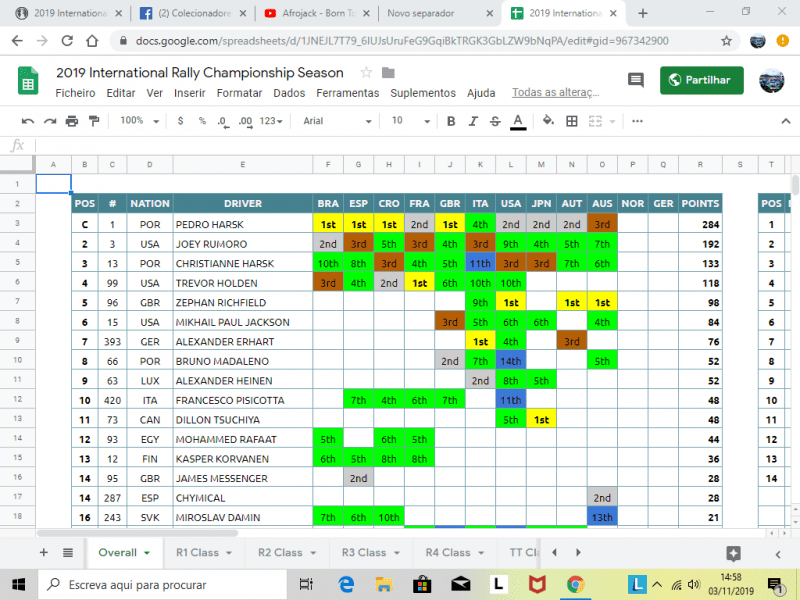 With that, the 2019 IRC Season is close to the end. There will be the 2019 IRC Round #11, which will be the Rally Norway. The track for this penultimate round is the Fisherman's Ranch Forward and it will be 2 laps long.

The Rally Organisation is looking forward to see you on the track for the final two rounds. Round #11 is set to start on November 11th and it will end at November 17th.

When can I do my laptimes?

RappyThePro
When can I do my laptimes?
Click to expand...

Any time in that period. Harsk will usually open a lobby every day for people to go in and run their laps.

Round #11 will see the first edition of Rally Norway rolling on from tommorrow to next sunday. The track is Fisherman's Ranch Forward and the rally will be 2 laps long.

The Rally Organisation is looking forward to see you on the track, Round #11 starts tommorrow...

The Round #11 from Rally Norway has finished and @ZedNinetySix has achieved 3rd win in a row and his 4th win of the season, thus equalizing @Harsk100's number of Round wins for this season.

Here are the Round #11 results and the Standings after Round #11 as it follows... 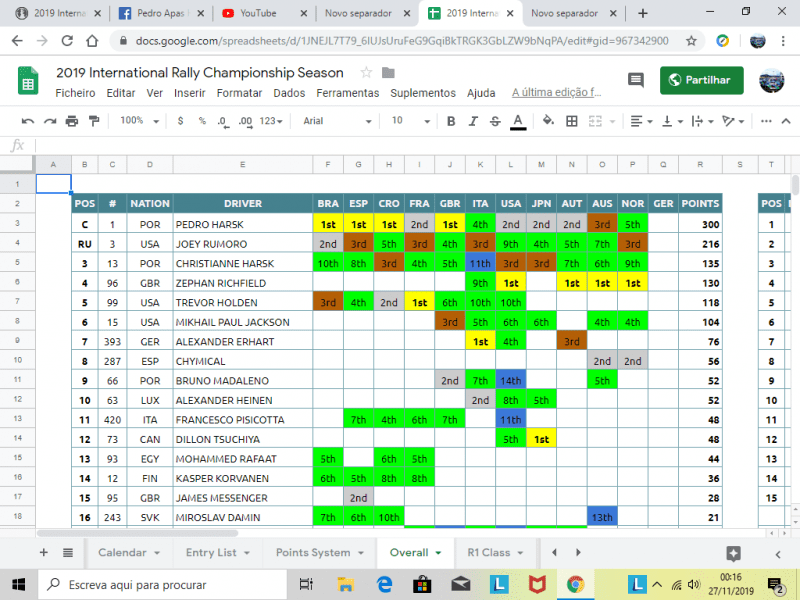 Like the previous 3 rounds, there was some trivia during the Round #11:
- @ZedNinetySix has achieved his 3rd win in a row and his 4th win of the season. With this, Zephan equalizes @Harsk100's number of IRC Wins in this season. It's the 5th win of the season for Toyota;
- Peugeot has returned to IRC after one sabbatical year. Amador Silva, the spanish guy has won the R2 Class in this Round and became the first driver to win the R2 Class with a FF Car;
- Subaru is now out of manufacturers title contention: The 2nd place finish from Chymical allows Mitsubishi to discuss the manufacturers title with Ford in the final Round from Rally Deutschland;
- New Union Racers Club has fielded two drivers from Scotland for this Round: @Richie massie, who achieved a 8th place finish and his wife, Fiona Massie, who finished 12th overall and 3rd between the drivers competing on International Rally Cup for Women Drivers;
- Sami Saukkonen has achieved his R4 Class win of the season. After struggling on the first two rounds, the finnish driver took advantage of Sunday Harsk's absence and gave the first class win ever for Porsche. His win was also very important, since he's only 1 point away to win the 2nd R4 Class Championship title in a row;
- @Mikhail24RD has overtaken Emil Vemppu Lutku and jumped to the International Rally Cup for Junior Drivers: Under-22 Trophy lead. With that, he only needs to finish 4th to win the Under 22 Trophy;
- @Obelisk is the new R2 Class Champion with his Mitsubishi. @Neyrox's absence allows the Mitsubishi driver to clinch the title with 36 points clear of Audi driver;
- Despite of failing to capture the R2 Class Title, @Neyrox wins the International Rally Cup for Junior Drivers: Under-17 Category, thus suceeding Luke Mitchell (he won the 2018 Under 17 Trophy).

Congratulations to the winners!

With that, the IRC final Round will be the Nurburgring 24h Layout Nordschleife. The length is 1 lap long and it will be hosted on 9-15 December.

However, before the final round, there will be a Rally Trophy - Little Winter Cup, which is a Mini-Tournament which will be used as a Pre-Season test for 2020 IRC. For who is interested, please click on the following thread:

The Rally Organisation is looking forward to see you on the Track for the Rally Trophy and the final IRC Round.

See you guys for the Final Round!

Sorry for the 3rd post in a row guys.

Track is Nurburging 24h and the rally is 1 lap long.

The Rally Organisation is looking forward to see you on the track for the final IRC Round...

Sorry for the 4th post in a row guys.

Here are the results, as it follows...


Here are the standings, as it follows...

With that, the 2019 IRC Season is now finished. The Rally Organisation is looking forward to see you on the 2020 IRC Season, which is set to start on January 6th 2020.

Thanks to everyone for participating on 2019 IRC Season!

how do i delete dis lmao