The Spa 3H brought a lot of action along with the first red flag of the season, the second 3H race of the season at Monza looks to bring more close racing, but hopefully without the interruptions.

The Temple of Speed is a mostly flat-out circuit, even in these prototypes and GT cars, but teams will still need to have their cars set up to be able to attack the fast Lesmos and the Ascari Chicane. The braking abilities and downforce of the P2 cars will see them almost flying around the track, but getting themselves stuck behind GTE cars through the tight 2nd sector may prove to be quite troublesome.

While both P2 and GTE class cars have more than enough to attack the fast corners at high speeds, the track also features some of the slowest corners in the calendar with the first chicane. Finding the braking point after the long main straight is simple enough, but keeping the rear stable under acceleration out of the chicane could be tricky for everyone. The rear-wheel hybrid of the P2s can easily spin the rear tires, while the weight of the GTE cars make it difficult to keep the rear planted out of a slow corner.

EDIT: Seeing as a change of host worked favorably in Spa in terms of resolving severe latency issues among drivers, @Herimopp89 (PSN: herimopp89) will be acting as lobby host from this weekend on.

For the second 3H race of the season at Monza, everyone was treated to a race of attrition around the temple of speed. With strategies varying all across the field in both classes, it became a test of how every team was going to execute their strategies while keeping themselves out of trouble. Just like it has been with most of the races this season, the class battles were decided in the late race, and proved enough for a very interesting finish.

After the two 3H races of the season, we now enter a triple-header that spans across the final 3 rounds of the season. First up in the triple header is the Fuji 2 Hours.

Fuji Speedway has always been a popular track for multiclass racing, providing a lot of opportunities for close racing within cars of the same class, as well as fair bit of challenge for the faster class cars to overtake, especially in the tight third sector. Both P2 and GTE cars will often find themselves engaging in braking showdowns into T1, since the 1.47km main straight will be more than enough for cars to draft each other. Drivers will need to be careful to not push their braking points too deep, as going wide out of T1 will prove to be very costly.

The 100R is also a point of attention, as while the P2 cars will almost certainly take this corner flat out, encountering GTEs in the middle of this high speed sweeping right hander can become bothersome for the prototypes. Tire strategies could also be an important factor in this race, with the performance differences between the tire compound looking to be significant enough that drivers would need to really make the most out of the soft tires for the stint to be effective.

Timlour
@Antares26 Going to need my team name changed from Gulf Light Velocity to Elf Light Velocity. Was going for Gulf sponsorship but found out that Elf and Gulf are both motor oils. Learned something new.

Can i ask you a question? how did you take the second photo?

DS13_supergt
Can i ask you a question? how did you take the second photo?
Click to expand...

Go to a full screen image of a livery. The end of the URL is "23.jpg." Change that to "1.png" to get the second image layout.

Lap 22 and 23 (P2) - #61 (@Sinyster) and #25 (@CrazyJohn) - Impeding Lapped Cars of the Same Class
Result: No Action
At the end of lap 22, car #61, being lapped by the P2 leaders, ran wide out of the final corner, allowing car #25 to pass. However, this placed car #61 in the draft of car #25, allowing the former to regain position into T1. Car #61 was able to keep a considerable distance to car #25 throughout Sector 1, with the latter only getting into overtaking distance again in the middle of 100R. On the exit of 100R and entry into the hairpin, car #61 moved to the outside and took a deep line into the corner, a conscious effort into giving the position to the lapping car. No action necessary due to car #61 ceding the position at the soonest possible opportunity when car #25 was in close overtaking range.

Lap 24 (GTE) - #46 (@Kermit_2142) and #55 (@Herimopp89) - Causing an Avoidable Collision
Result: Warning for Car #46
At the exit of T1, car #46 makes contact with the right rear of car #55, sending the latter into a spin and into the inside barriers, incurring mechanical damage. Car #46 then decelerated significantly and allowed car #55 to retake the position. Car #46 then continued to stay behind car #55 for the rest of the lap until the latter comes into the pitlane to repair damage. A warning is given to car #46 for the incident.

Fuji opens up the first of the season ending triple header, and we were all in for a very thrilling race. The long start/finish straight provided a lot of battles down the first sector, some even stretching all the way through the long sweeping right of 100R. Surprisingly, there was not much variation with regards to strategies across the field, with only a handful of cars opting for early RS stints. This only served to add to the close battles that were happening throughout the race.

Part 2 of the second of the season ending triple-header brings us once again to the Land of the Rising Sun, this time in the high speed combined layouts of Kyoto Driving Park, a 6.8km track that features high speed corners, with the momentum broken only by 4 hairpins. The track has been a fixture in CWM-organized series, but this race marks the first time we've used the Combined Layout.

Arguably the most fun track for the P2 class cars, it will be quite interesting to see how they navigate around the slower GTE cars in this race. And while lacking in comparison to the prototypes, the GTE cars should still have enough downforce to be able to attack the high speed corners, however drivers need to be very mindful of braking in this elevation-filled circuit, as some of the key corners in this circuit come after steep downhill inclines that makes braking tricky for everyone. Just like in Fuji, the draft may also prove to be very effective around this circuit, and cars set up with too much downforce may find it difficult to build a gap even with the softer compound tires.

How can i be a spotter?

Lap 56 (P2) - #17 (@Storm_SP17), #81 (@Theaffliction), #25 (@CrazyJohn) - Causing an Avoidable Collision
Result: 5s Time Penalty for Car #17
On the Miyabi main straight after the long, sweeping left-hander, car #17 made way for the lapping car #81 which was leading the P2 Class. However, car #17 missed their braking into the following hairpin, making contact with the rear of car #81 and sending them off-track. This resulted in car #25 also making contact with the now slowed car #81 at the exit of the hairpin. While all cars involved suffered no mechanical damage, car #17 missing their braking is judged to be a driver error, resulting in a 5 second time penalty.

Easily one of the best races in the calendar, Kyoto proved to be a very fun track to drive around for all the cars, especially the high downforce P2 class cars. The draft predictably allowed for very close battles, but the flowing corners of the track made overtaking very difficult, as most corners had a single optimal line that lead cars can easily use to defend, while the trailing cars had to deal with the dirty air. While the P2 battle went down to the wire in dramatic fashion, the GTE class saw a very dominant performance that also effectively sealed the GTE Teams championship for Elf Light Velocity.

All eyes ahead now to the season finale: the grueling race of attrition that is the Laguna Seca 3H.

ROUND 7 - LAGUNA SECA 3 HOURS
Track Time: 14:30
Lap Count: 150 Laps
Restart Zone (in case of a yellow flag): From the exit of the final corner to the start/finish line.

The final race of the season brings us to the WeatherTech Raceway Laguna Seca, one of North America's most famous racing circuits. With a tight and technical 1st sector that leads into a series fast left handers of the 2nd sector all the way to the top of the hill where the drivers meet the iconic Corkscrew marking the start of sector 3, a steep downhill sector that wraps up a lap of this circuit.

With a deceptively short lap, maintaining consistency throughout the 3H race is going to be key, as the gravel traps that surround the circuit are some of the most unforgivable off-track surfaces in the calendar. The downforce of the P2 cars are sure to provide them huge amounts of grip especially through the fast sector 2, but the low grip technical sector 1 where delicate throttle work is required could prove challenge in these hybrid-equipped prototypes. GT cars are some of the mainstays of racing at Laguna Seca, and the GTE cars should feel right at home, with a balance of downforce and mechanical grip allowing them to have somewhat of an easier time around here than the prototypes.

While predicted to be a race of attrition, the 3 Hours of Laguna Seca proved to be more challenging to everyone than expected, with every single car in the field suffering an off-track excursion at the very least, and heavy mechanical damage at the worst at several points on track. Surprisingly, there was very little to no contact related incident in the race, with the drivers simply getting caught out by the deadly high kerbs of Laguna Seca that unsettled their cars into a spin into the gravel, or into the wall for the unlucky few.

Even still, everyone soldiered on and while the victories in both classes looked very dominant on paper, it was the winning drivers consistency that allowed them to make the least amount of mistakes while still managing to maintain their pace throughout the grueling 3 hour race.

Season 2 of Apex Endurance League has now reached its conclusion, and with it, we crown a new set of champions! 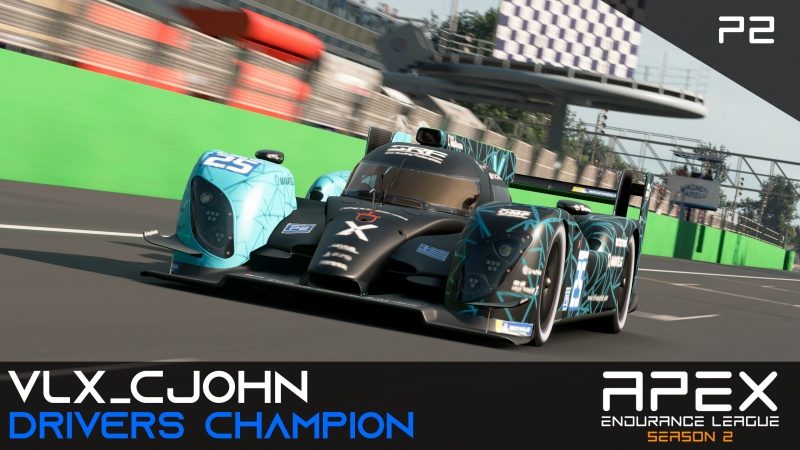 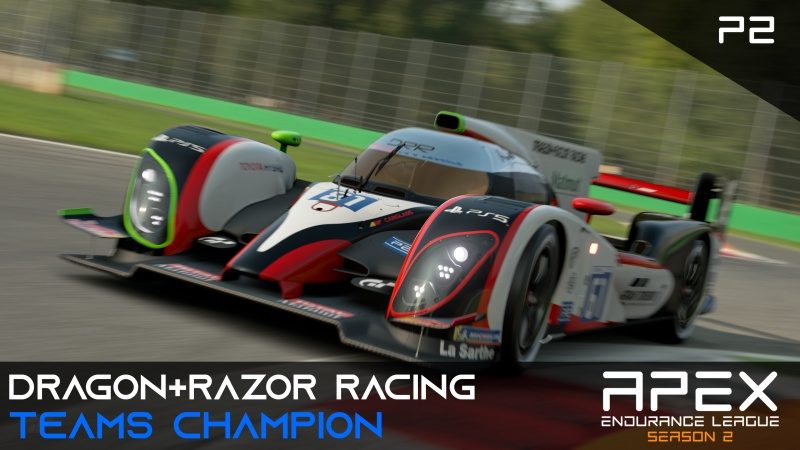 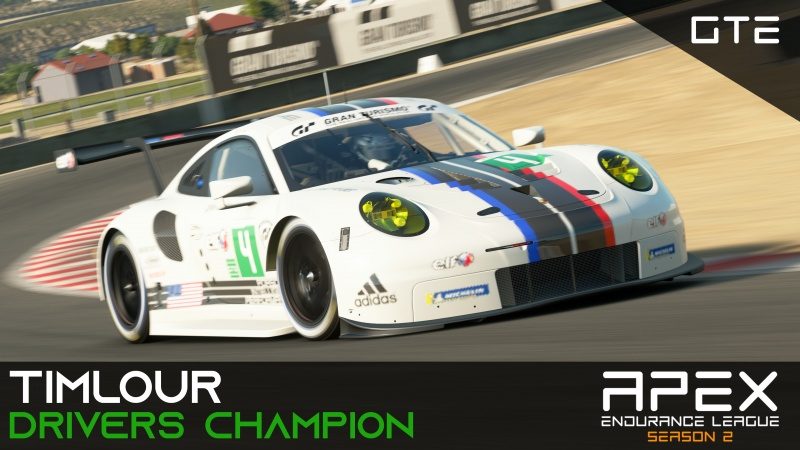 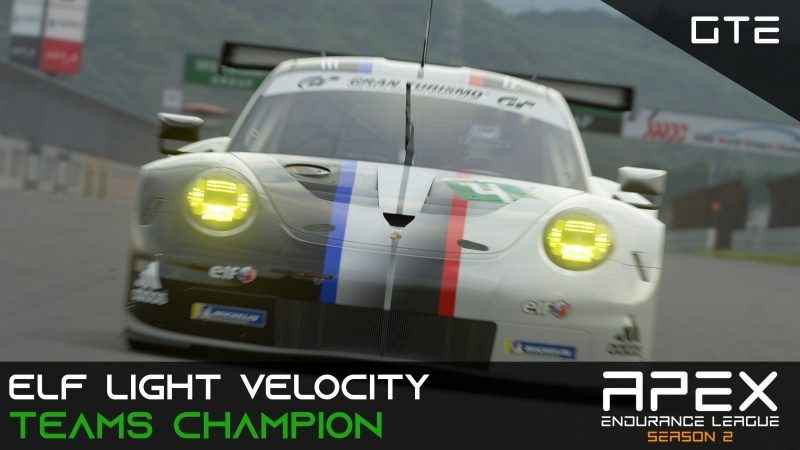 On a personal note, we at Clockwork Motorsport would like to thank everyone who participated in making the second season of the Apex Endurance League a success! It has been a very wonderful experience for us to come in and enjoy the high quality of racing for every single round. We took this season to try out some new ideas as to how to continue hosting this series, and we are very confident that we can keep delivering high quality racing moving forward.

Once again, thank you everyone and we hope to share the track with you again in our future endeavors.