Hello GT Planet Community,
i'm new to this forum though i often read some threads in the past.
I play GTS since launch on PS4 Slim. I'm B/S and an average driver. I play with DS4.
Since 3 weeks i can't load a ghost in Sportmode/Daily Races/Qualifying. I can load it, but it doesn't appear. I checked the settings (Ghost in ON) and pressed R3 a few times, but it doesn't appear. The strange thing is that i can play the replay of this "Online fastest lap". In Arcade Mode/Time Trial i can load my ghost(s) which i created in Arcade Mode, but the Sportmode ghost doesn't work in Arcade Mode, too. I remember that ca. 3 weeks ago at Tokyo Expressway Easter Outer Loop / Group 4 all went fine with loading a ghost. Perhaps it has something to do with the second March Update. 2 of my friends i asked don't have this issue. In the bug thread a similar problem was discussed but it was more general and only a few members were affected.
So if anyone has the same issue, please post it so that i know i'm not the only one.

I'm also new to GTplanet forum, and like you I have a problem with loading my "best lap replay" as a ghost. They play OK from my library, so the ghosts are being saved.

It all started when the Autopolis update came out a few weeks ago, none of my new saved best lap replays will load as a ghost. All my older ghosts seem to be OK. so far. I should point out this is in Arcade/Time Trial mode.

Is there a link we can inform GTSport whats going on?, as they may not be aware of the problem
Last edited: Apr 14, 2019

First of all thanks for your answer, billdan.
A similar problem we have here, but different in the details and the time it occured.
I only know - that when GTS crashes - you can submit the issue with a video of the last seconds before the crash to PSN. But that's not the case here. But a link where you can inform PD or Sony i don't know. I think there exists one, but you have to be able to write in japanese. Further only a small number of players are affected, i guess. If all had this issue, PD would for sure try to fix it.

EDIT: Yesterday I found a ghost of a saved Sportmode/Daily Race "Race-Replay" with the same combo of last week's Race C (Fuji Speedway/Toyota 86 GT) from October 2018. I could load my fastest lap of this race and the ghost appeared. So this is the evidence for me that older ghosts work but newer ghosts do not. As the game works fine in every other aspect, something must have changed - perhaps due to an update - so that newer saved ghosts have an issue with beeing loaded. But why this issue occurs in my case in Sportmode and in your case in Arcade Mode and why at different times (yours after AUTOPOLIS Update) and why others are not affected, is a mystery to me.
Last edited: Apr 15, 2019

There is a new bug out there that I noticed since at least the last update. Loading the ghost replays will sometimes result in the ghost starting several seconds after you cross the line and then, it appears to only do one lap.

Hopefully, it's fixed in the next update. (hopefully, they also restore some of the stability of the GR3 458 and GR3 Huracan)

Hello Voodoovaj, thanks for your posting. This with the ghost starting several seconds after i cross the line i had in the beginning of this bug. Now it doesn't appear at all. Hoping for a fix in the next updates is all we can do. GTS has become a very complex "building" so that some bugs only occur for a small group of players. Strange but true.

I have the exact same problem you guys have been describing. Frustrating. I hope a fix is on the way soon.

Welcome in the club. Last week on Goodwood one ghost worked, but later a new one didn't. It's really annoying. I wonder if PD is aware of the issue, cause only a few players are affected.

Been browsing here every now and then and just signed up to say same here. I was having loaded ghost issues for something like at least a month intermittently but now theres nothing.

Found 7 tenths extra from nowhere around brands hatch and next day, no ghost there to battle with so it's very frustrating

Thanks for posting. The more people get aware of this issue, perhaps PD will have a closer look on it.
T

There may be a problem loading a ghost from best lap replays when achieving that lap on the 2nd, 3rd, so on lap in a session.

Tou2istTrophy
There may be a problem loading a ghost from best lap replays when achieving that lap on the 2nd, 3rd, so on lap in a session.
Click to expand...

I tried a few times with the 1st lap in the past only for testing purpose and it had no influence. In April this year i had the issue for the first time after an update and since then i can't use this feature in Sport Mode anymore.
M

I just bought GTS and am experiencing the same issue. However, it only happens in about 50% of the cases. So some ghost replays do load correctly.

I have no idea what's causing this...

I'm returning to the game and wanted to practice some FIA and my ghost don't work! Never had a problem before

Personally, i blame this all on Casper's three uncles...!

No ghost, only tried in Sport mode, for the FIA.
Or, sometimes the ghost appear far away behind me.
That’s sucks because with ghost training, i’m sure I can beat TRL LIGHTNING.
(I like this bug cause I have a excuse for my ego)

But seriously, that pissed me off.

The strange thing is that PD added the option to enable/disable the loaded and the session ghost separately 2 updates ago. But obviously they didn't become aware of the loading issue.

Faux Nul Zero
Same here. Since 3 or 4 months I think.

No ghost, only tried in Sport mode, for the FIA.
Or, sometimes the ghost appear far away behind me.
That’s sucks because with ghost training, i’m sure I can beat TRL LIGHTNING.
(I like this bug cause I have a excuse for my ego)

But seriously, that pissed me off.
Click to expand...

I'm having this same problem too. Either:
1) ghost doesn't load
2) ghost loads but the timing is way off
3) ghost loads for 1 lap and then disappears in 2nd lap
4) right now my ghost loads, but it disappears after turn 1.

Makes it very annoying when trying to qualify for daily races.

Thanks for posting, Rizzy13. The more people become aware of this issue which occurs in different modes and different forms, the higher the chance that PD will fix it. I hope that at least one PD member can read english.

Today i have to realize that (probably due to Update 1.41) even in ARCADE MODE/TIMETRIAL the ghost is delayed in the first lap and disappears in the second lap after first corner with a 180 degree spin. In the past in the Arcade Mode i had no issues.
Last edited: Aug 6, 2019
K

Yeah I'm having the same problem. Ghost not loading in sport mode, sometimes starting late in the lap and only for one lap. Such a strange bug.

Do you notice that guys?
It seems that polyphony has reacted. Thks PD
(I have not tested yet but I think it should be solved with this update now) 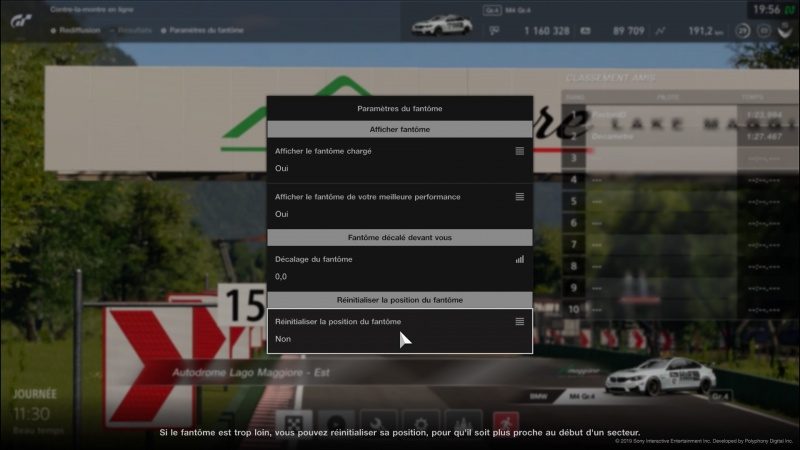 I did a test and unfortunately the maj did not solve the problem for me. I hope the test will be more positive for you.

The ghost options have been redesigned in the menu (so to say all in one submenu), but have no influence on the ghost issue (at least in my case). The enabling and disabling of the loaded ghost and the session ghost exists for a while, the time delay and sector reset was added in 1.41. But all these options are useless when the ghost can't be loaded.

I'm sick of this bug.
I take advantage of the FIA break to delete and reinstall the game, +/- 40Gb for updates is 4h with fiber, maybe less, it's reasonable.

I have this issue too. I was able to fix it for a while.

I don't know exactly what i did. I had to disable both ghosts, exit the time trial sesion, save, close the game restart. Something like that. The issue returned though.

Faux Nul Zero
I'm sick of this bug.
I take advantage of the FIA break to delete and reinstall the game, +/- 40Gb for updates is 4h with fiber, maybe less, it's reasonable.
Click to expand...

I've the digital version and slow internet. The 105 GB would take me 24 hours to download. So i'll wait with this step...cause with the next update the issue might come back again.

Ofuscor
I have this issue too. I was able to fix it for a while.
I don't know exactly what i did. I had to disable both ghosts, exit the time trial sesion, save, close the game restart. Something like that. The issue returned though.
Click to expand...

I'll try this workaround. Even if it's only for a while.

Same here: when I load ghosts from saved replays, those ghosts do not appear on my screen... even when I'm not driving Ecto-1.

I tried Ofuscors workaround, but it had (in my case) no effect. It seems that we have the same issue but for different individual reasons, different times the issue occured the first time and in different modes (in my case in Sportmode since April 2019 and in Arcade Mode since end of July 2019). As my game works perfectly in all other aspects, i don't dare to delete and install from new. I think we have to live with it till PD offers a fix within the coming updates.

It seems there are quite a few players affected, me included. Are GTSport aware? Can't understand how there's no fix. It's very frustrating.

That's right. I don't think that they are aware. Or they are aware but aren't able to find a solution. It's no obvious issue where all players are affected. Perhaps Faux Nul Zero's method of deleting and reinstalling the game will help. Then this would be the evidence that the players that are affected have all individual problems with the game and there's no issue with the game itself. But i wait to do this final step as my game runs stable.
Share:
Reddit Pinterest Tumblr WhatsApp Email Share Link