Each car can be used by a maximum of 3 teams.

If you need to, you can watch this informative video on how to make your livery compliant.
Lobby mode: Practice/Race
Race length: The minimum amount of laps that exceeds 150km

Qualifying: 15 minutes
Start type: Grid start for the Formation Lap, rolling start for the race
Tire wear: 5x
Fuel consumption: 2x (0x in qualifying)
Tire selection: RH, RM, RS (drivers do not need to use more than one tire compound in the race)
Damage: Full (Heavy mechanical damage and visual damage enabled)
Corner cutting penalties: Weak
Tuning on
Other penalties off
Flag rules on
Boost off
Slipstream strength: Real
The times shown use the US Central (CST/CDT) time zone. You can use this tool to see when the races are held in your time zone.

WHAT IS A STUCK CHECK? The stuck check is a simulated start before the Formation Lap, to make sure that nobody has issues getting off the line.

Race results and championship standings will be posted shortly after the race, once any potential incident reports are checked and penalties are given.
Round 1: Suzuka, 26 laps, 10 May 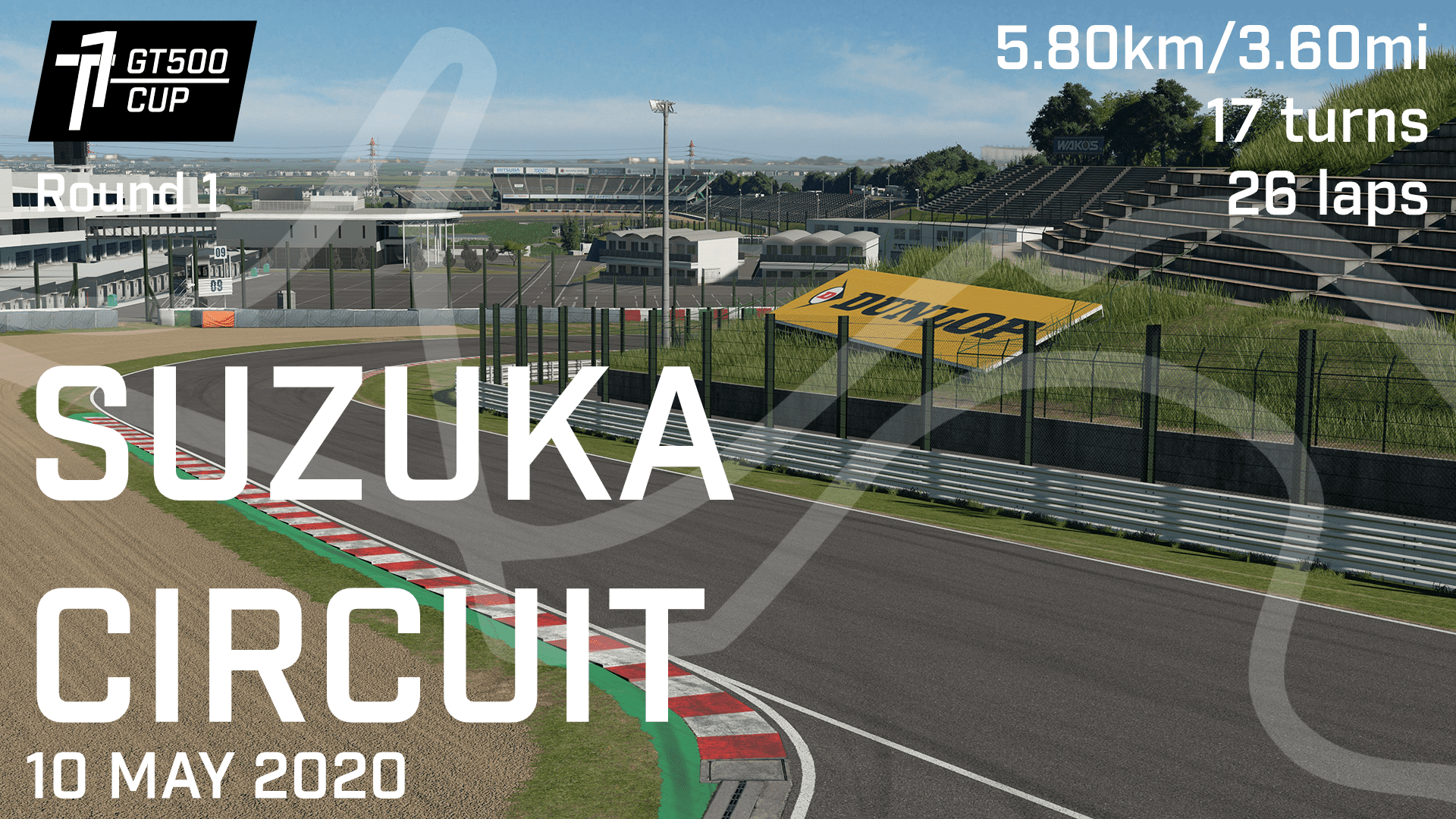 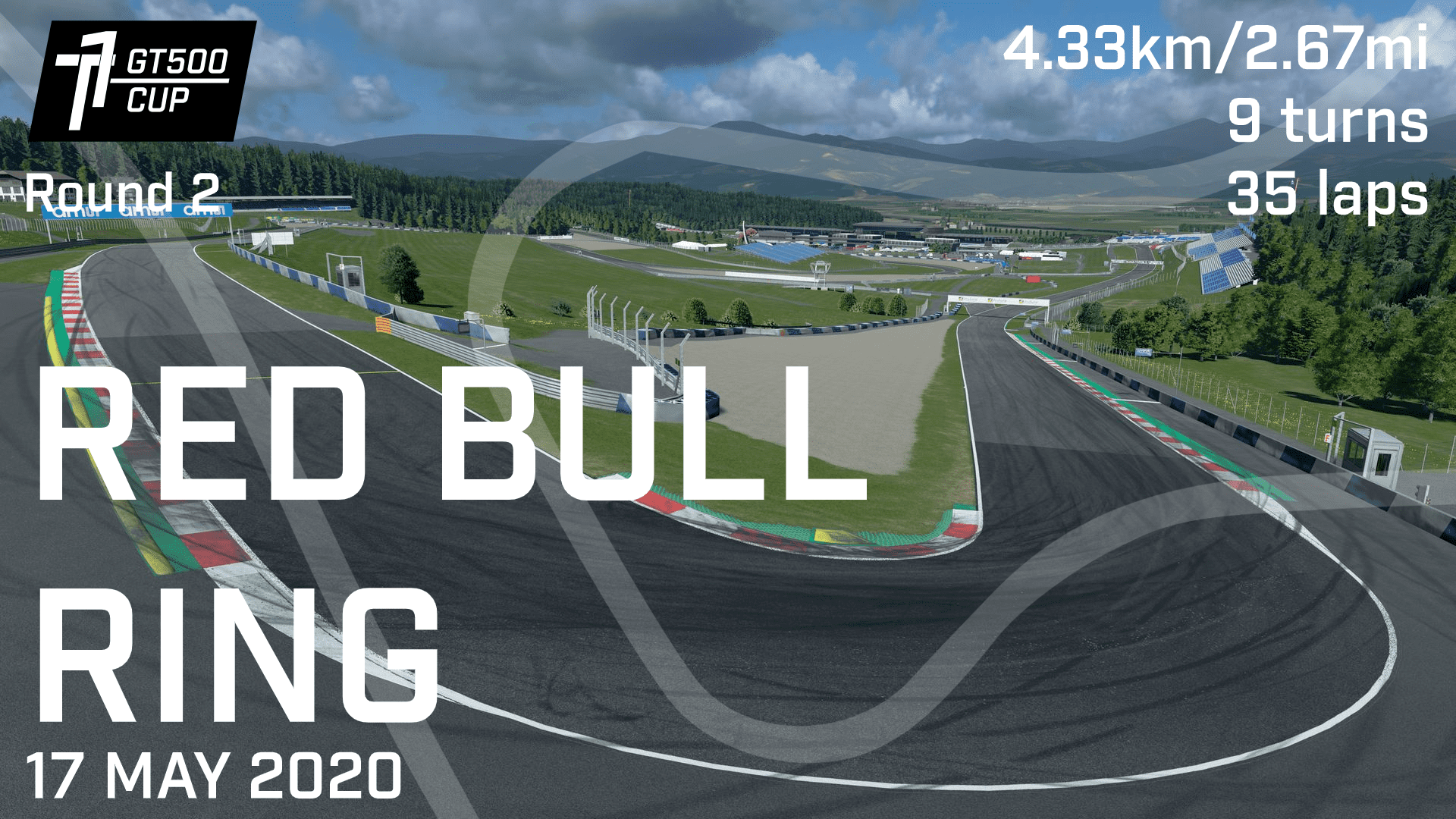 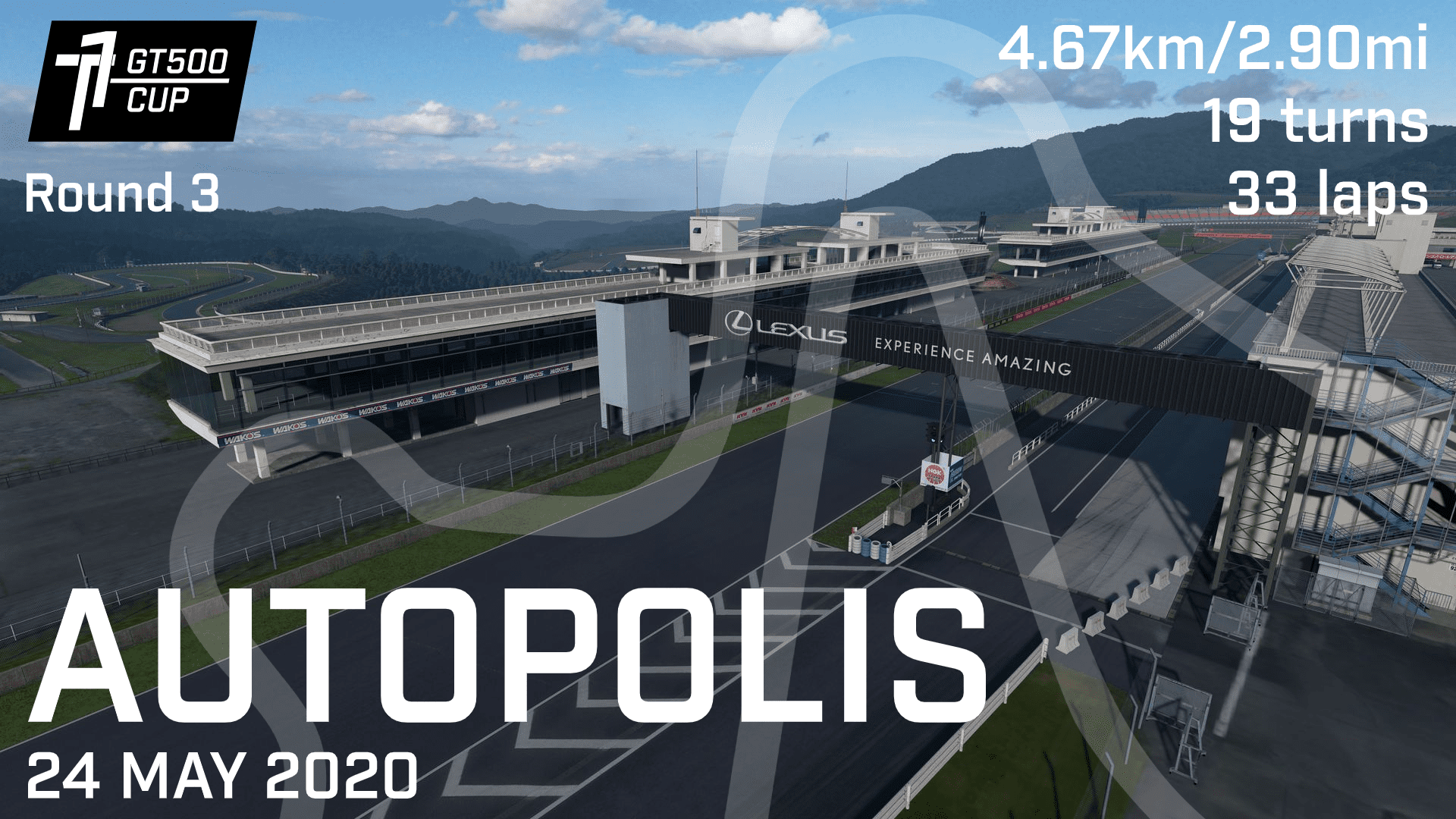 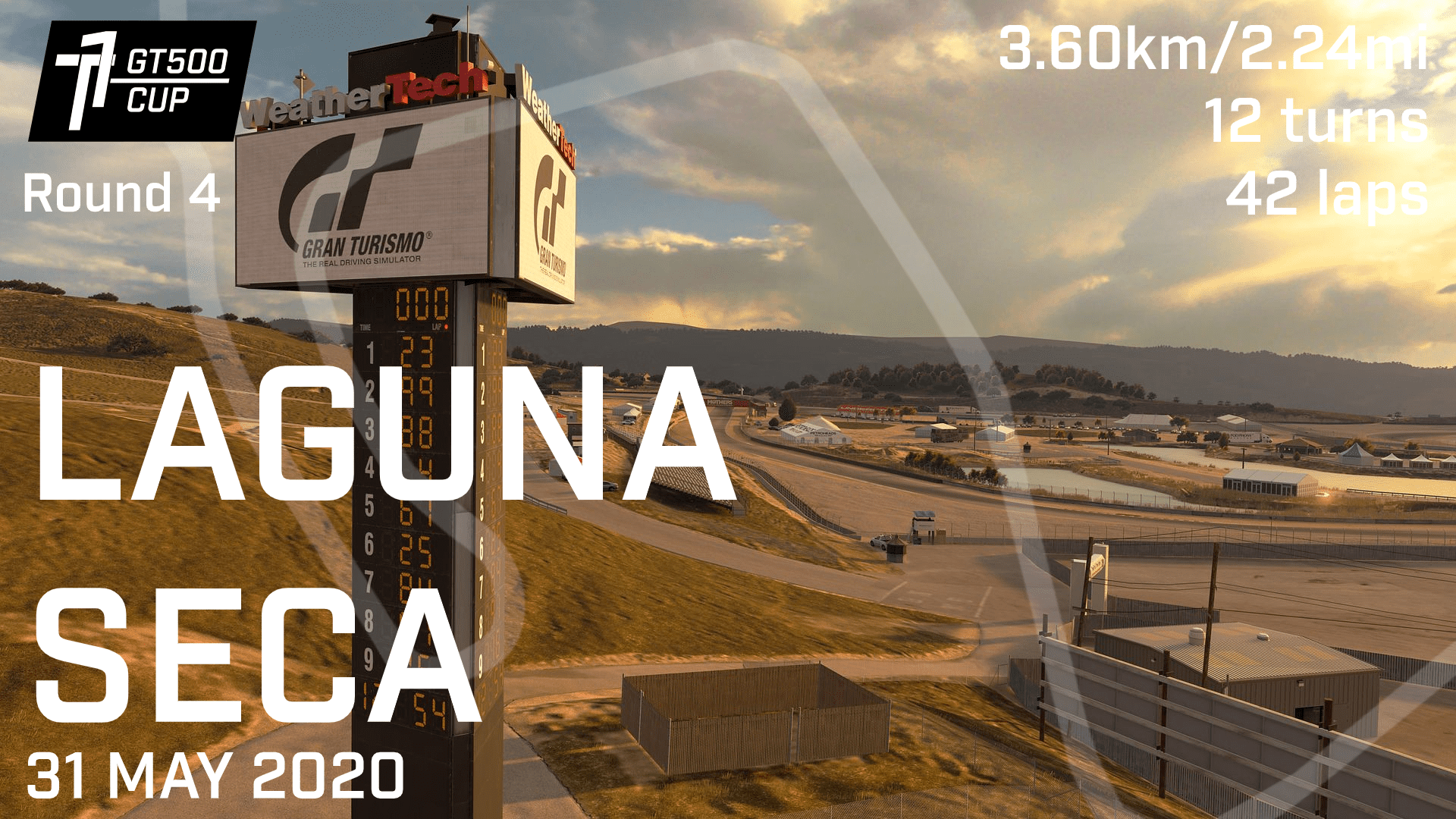 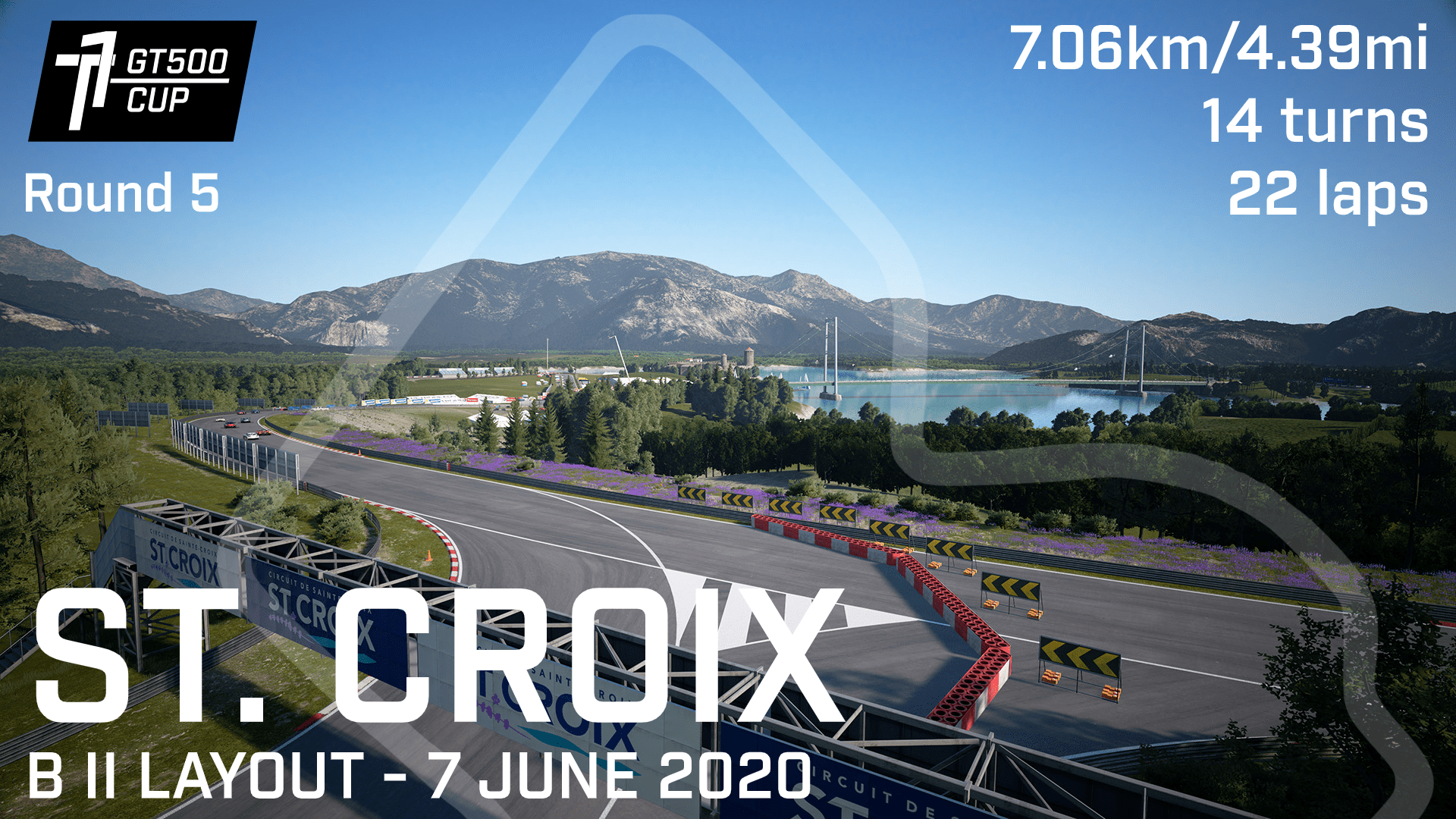 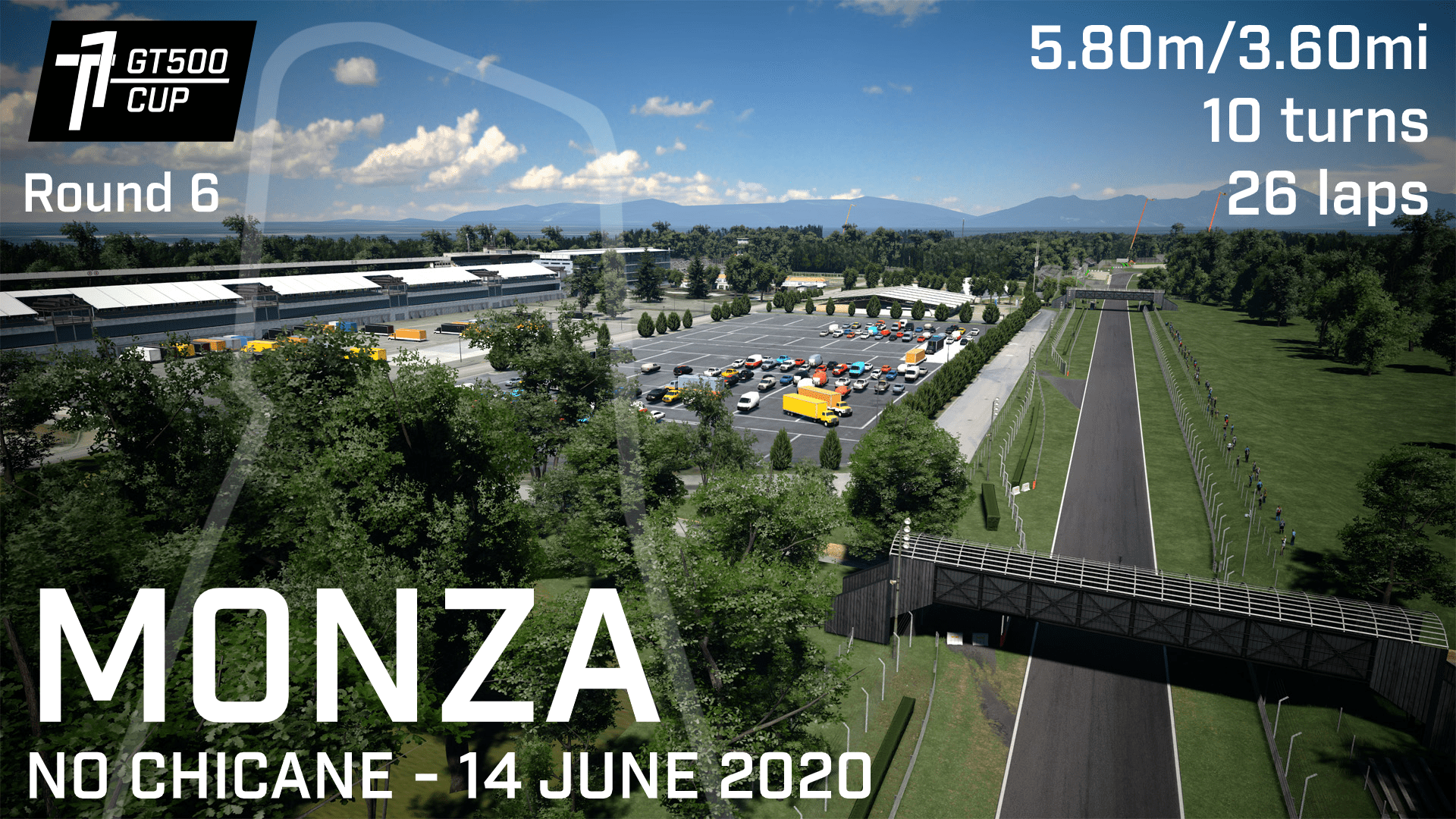 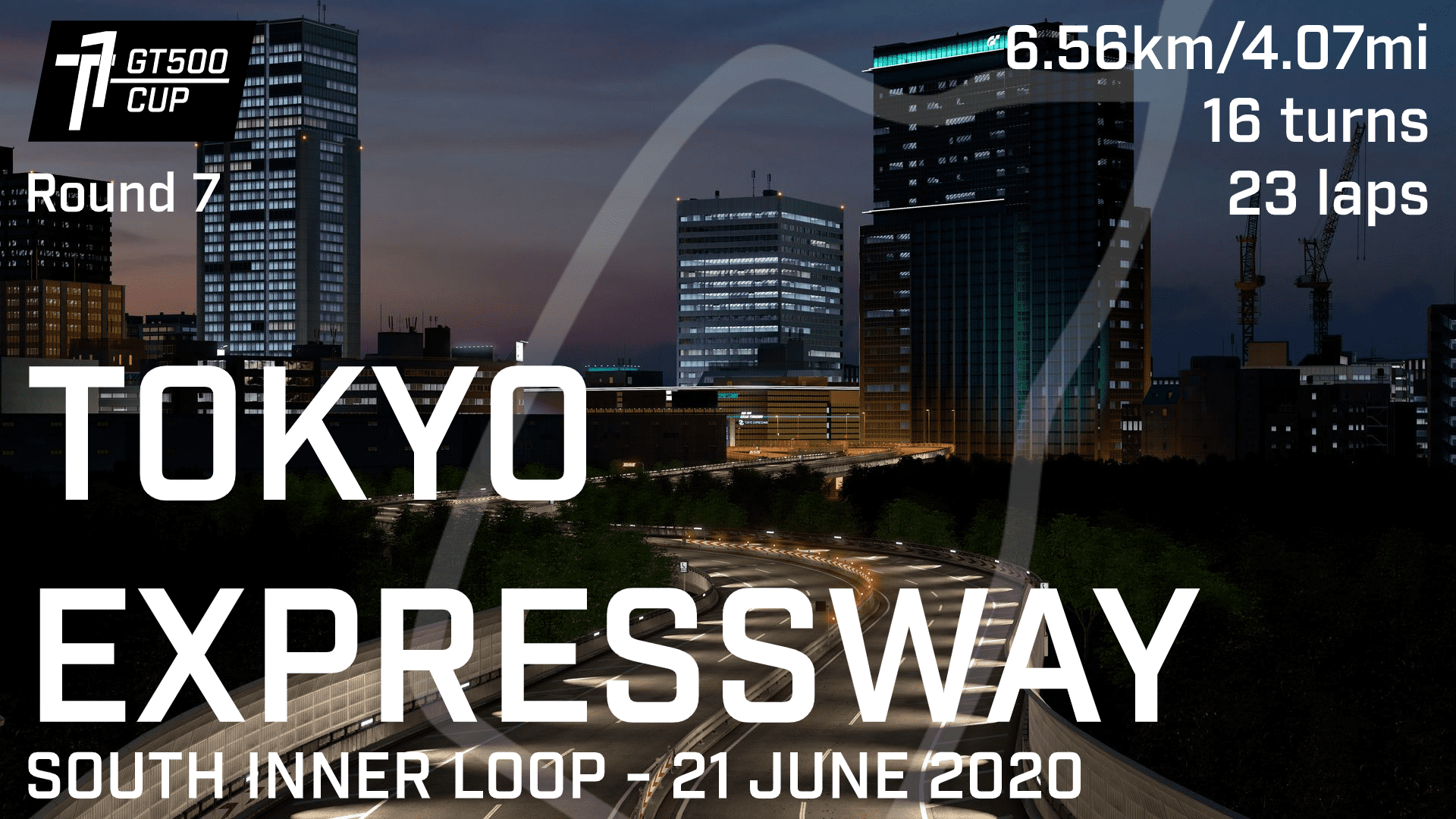 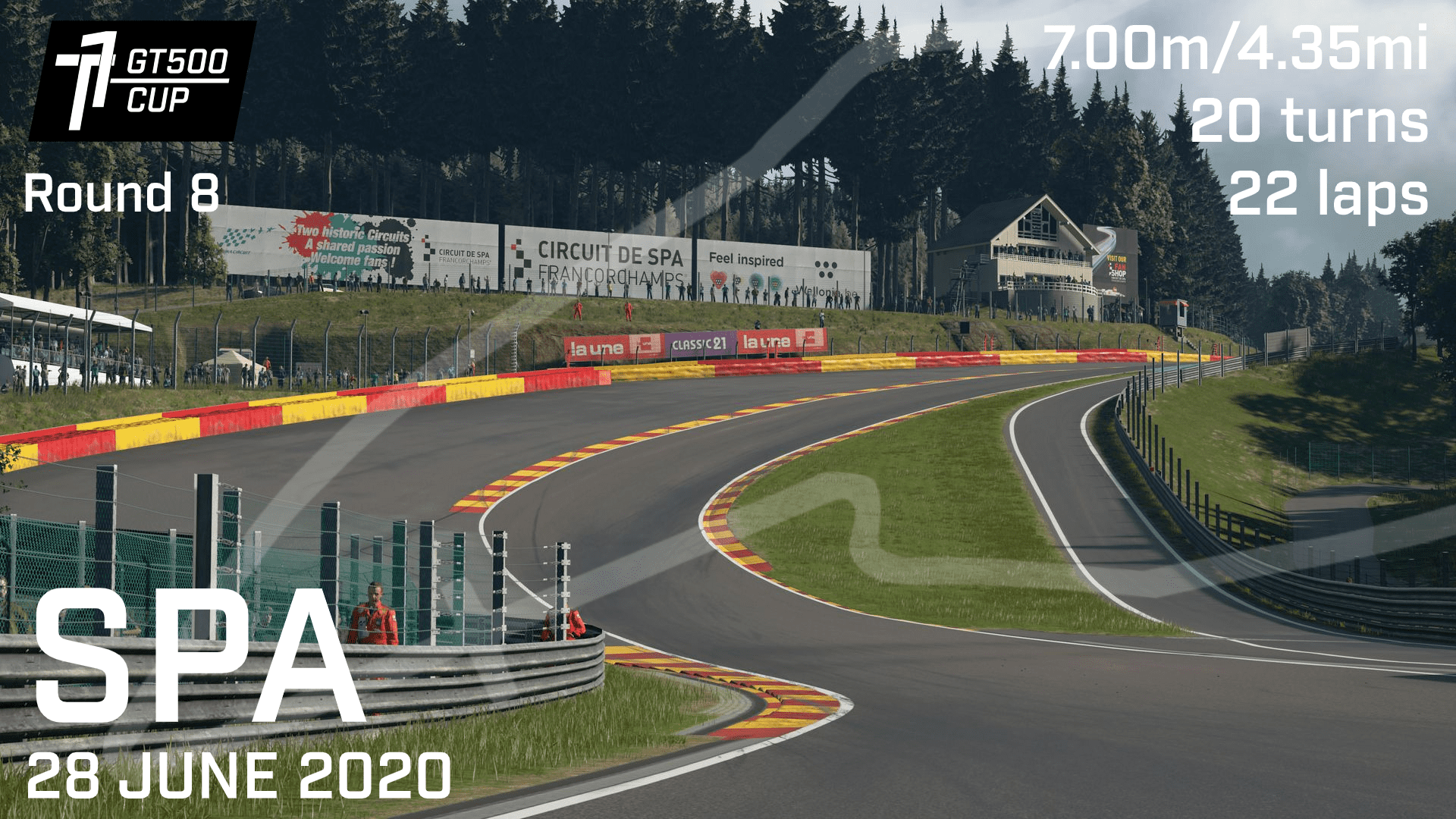 The in-game grid start option will be used, with the drivers driving in a single file for one lap, in the same way as in a Full Course Caution, following the leader. Once that lap is concluded, the green flag waves and the race begins. Each circuit is assigned a Restart Zone, and the leader can choose to speed up at any moment inside this Zone. Overtaking is not allowed until the timing line is crossed.

The maximum speed allowed in the Formation Lap is 100mph/161kmh
If a major incident occurs on track during the race, the Full Course Caution will be used. This procedure consists of the entire field lining up behind the race leader and driving at a reduced speed until the Race Director signals for the green flag.

If a driver is involved in an incident and believes an FCC is necessary, he/she must type "C" in the in-game chat. If multiple drivers send this message and show to have significant car damage and/or the race director deems it necessary to call for an FCC, he will do so by typing “Full Course Caution” in the in-game chat. The race leader must then slow down to a maximum speed of 80mph/129kmh and allow the field to form up behind him/her. When the Race Director calls for the FCC to end, all drivers will continue driving in a line until they reach the circuit's Restart Zone, where the leader will choose when to accelerate. Overtaking is not allowed until the timing line is crossed.
The GT500 Cup is sanctioned by the SRF (Sim Racing Federation) and will follow the “GT” ruleset of their 2020 Sporting Regulations. The full document can be seen here.


Drivers will face post-race penalties awarded by the Stewards in case of them causing an incident. Incidents that occur during Qualifying or the race can be reported to the Stewards, via a message presenting the report like shown in the example below:

Description: Driver X went to the grass to overtake me and forced me off track. He then divebombed Drivers Y and Z, crashing into both of them.


This format is used to simplify the process of finding the incident on replay.

The penalty awarded and how many penalty points are awarded is decided by the Stewards, depending on the severity of the incident and the amount of drivers affected.

Actions that can be penalised include:


This list does not cover all offences that can be penalised. It is up to the Stewards whether an incident is penalised or not.

Important: Having more than two wheels off the track will be considered an off track.

Higher finishing drivers will be given extra weight in their cars, and they will have to use it for their next 2 starts. The weight levels given are as follows: 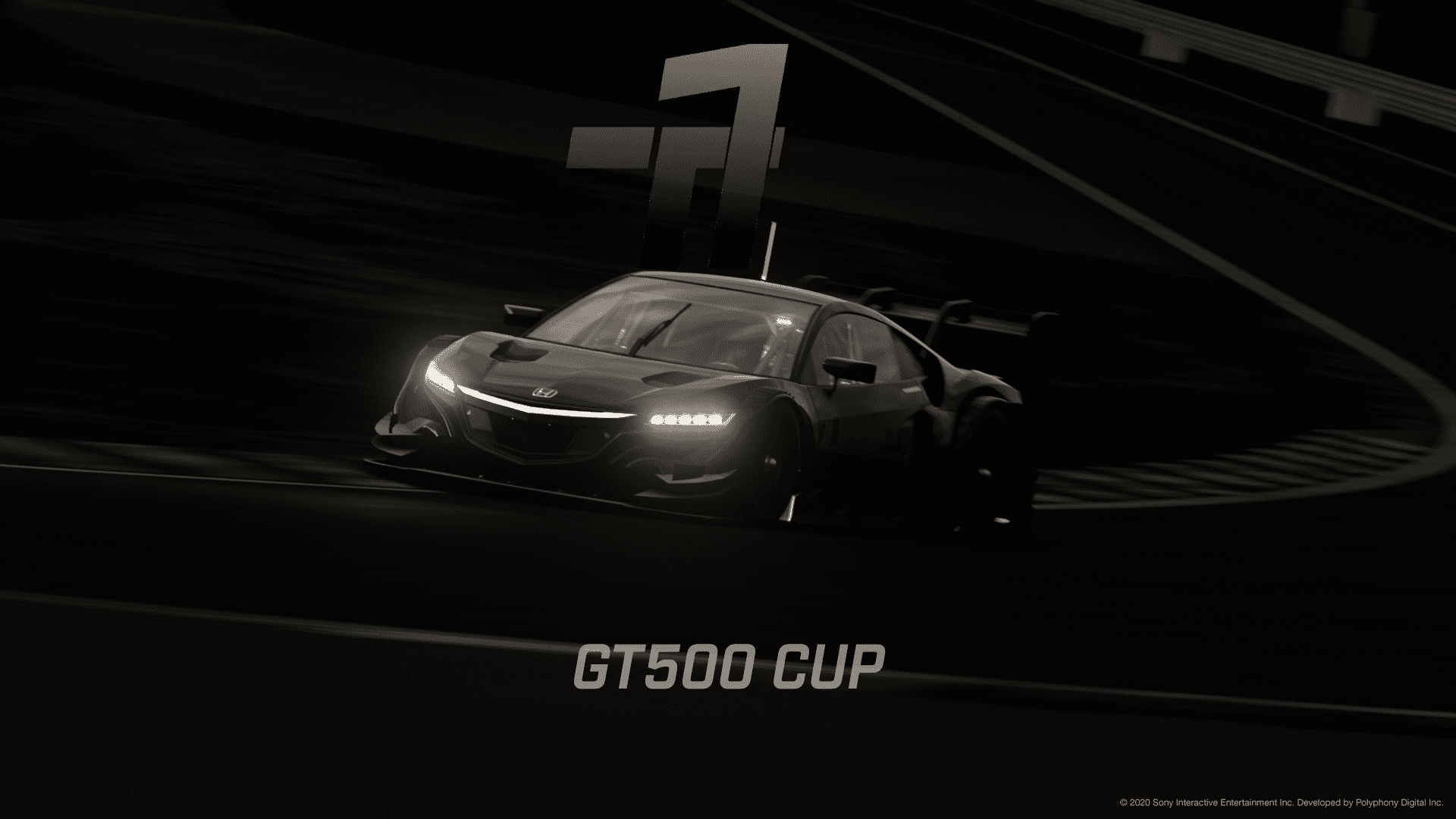 *looking for another driver as I may not be able to participate
Last edited: May 10, 2020

How do I get a spot In the series

Zigzagg310
How do I get a spot In the series
Click to expand...

If you want to register, take a look at the "Registration" section to join or create a team!
Z

The beginning of the season!

Next week will see the first ever race of the Turn One GT500 Cup, a new series around Gr.2 cars that promises exciting racing! We hope that this new series is one that provides an exciting and competitive environment for years to come in the GT league community, both in GT Sport and beyond. The series will start at the iconic Suzuka Circuit, a high speed, figure-of-8 thrill ride that will serve as a stunning backdrop for the first race. Some of the biggest teams in the community are taking part in the first season, so let’s take a look at the grid for Season 1:

Simpact is one of the largest and most competitive teams in the league racing community, and brings two of their best to GT500. Due to car and sponsorship differences, the organization decided to enter two separate teams, the main team, using the Lexus RCF, and their second team, NFS x Simpact Racing, running the Honda NSX. TSR_Tomsoft leads the main team, while TSR_Swablu heads the NFS squad. Swablu is looking to start the season with the race win at Suzuka, saying “A clean race would be a success in my eyes, hoping for the win.“ 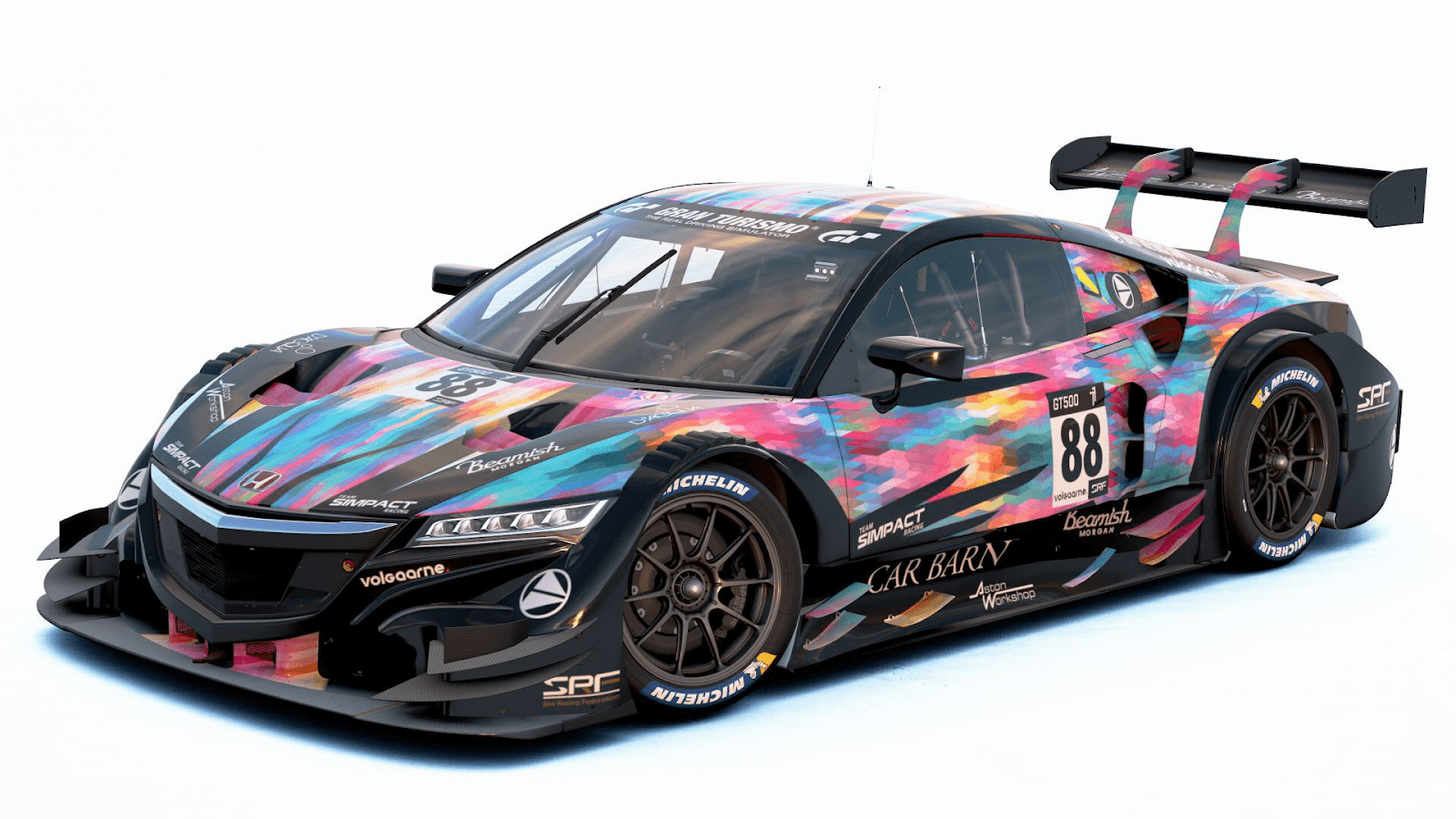 The long-running Arrows Racing Team, formerly known as Britannia Racing, enters under the name Arrows Miku Sukodo for the new season, with a striking blue, pink and white livery. Their current #1 driver is ART_Haighy, with his teammate ART_James alongside him. Haighy, who is looking to find his place in the field in the coming race, commented “Suzuka is a very twisty and technical circuit, and I'm still getting my head around the car, so I'm just going to focus on hitting my apexes, keeping my nose clean and we'll see where I end up.” 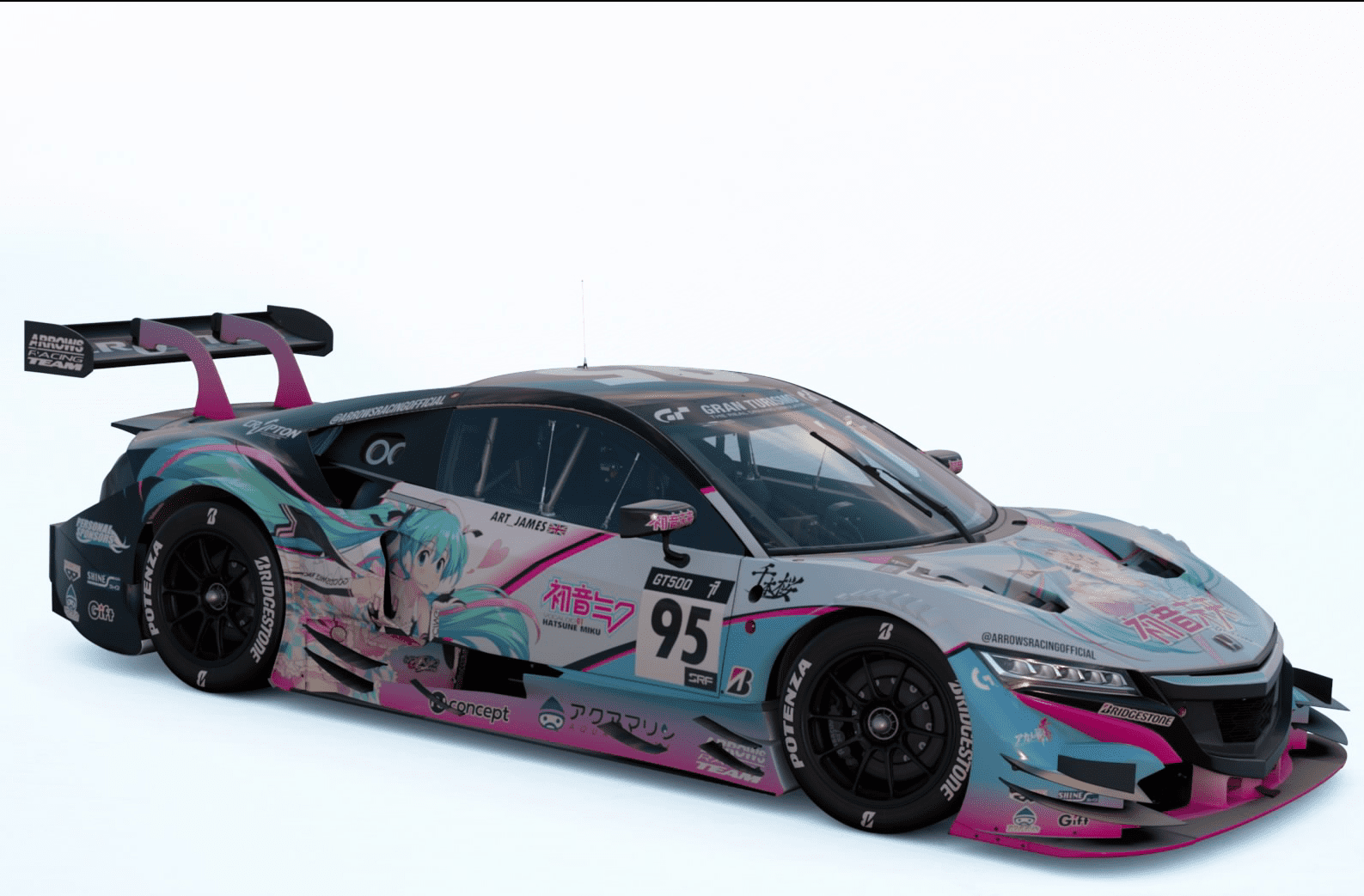 By far the youngest team in the GT500 roster, Turn One has little background in league racing due to its young age. Drivers Emilius73 and Superleggera lead the team’s efforts. While Superleggera is new to organized league racing, Emilius has a good amount of experience and is looking to find his place in the running order like ART_Haighy, saying “It’s very exciting to me seeing the interest in GT500. My goal for the first race is to maintain a good, consistent pace and keep myself clean, to figure out how we’ll stack up against the others.”

Meanwhile, Emilius’ teammate Superleggera from the Netherlands is taking a no-expectations approach to the race, saying “I don’t know exactly what to expect with my (probably) limited speed. I will try and get some practice laps in. I hope the racing will be clean with some nice battles.” 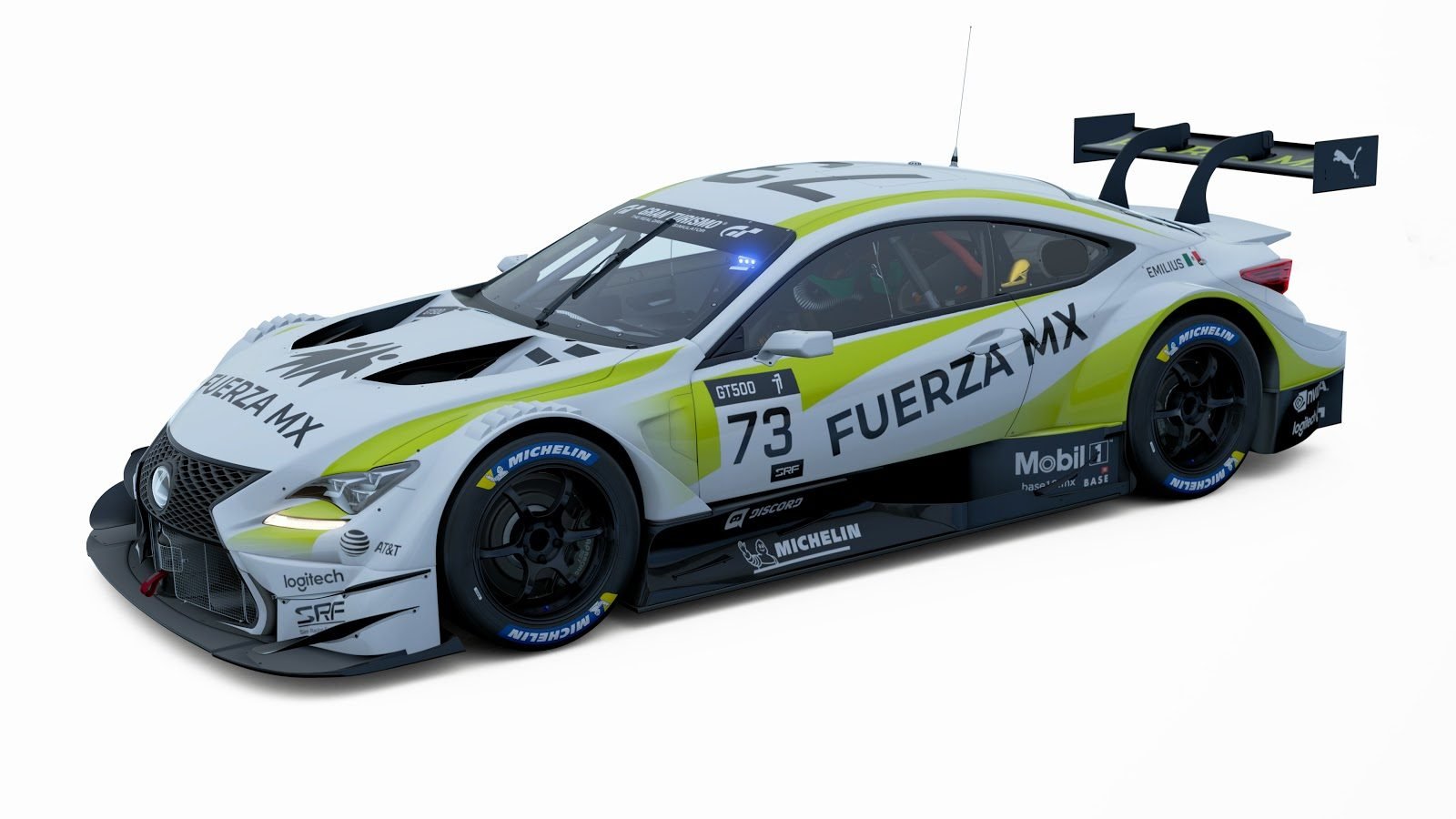 Golden Bear Motorsports’ amuda74 is known to be a consistent and quick driver, always ready to make the most of cautions and unknown situations. Like many other drivers, he and the GBM team are looking for their place in the running order at the first race, saying “A mid pack result would be an average result; even a podium is possible because as in ARS [World GT] I profit off of cautions massively. I guess we’ll see once we are there.” GBM are the only team not to unveil their final livery yet, so the look of their car will be one to watch out for in the buildup to Round 1.
N

I apologise if I've overlooked it somewhere, but I can't seem to find the race time? I see the dates of each round but no start time.

nuthunmuch
I apologise if I've overlooked it somewhere, but I can't seem to find the race time? I see the dates of each round but no start time.
Click to expand...

Zigzagg310
Hey guys if it’s possible I would like to drive the Nissan GTR
Click to expand...

Nissan isn't taken at the moment. So you need to create your team for the league. Like this:
For registering drivers for your team:
If you have any questions, tell us. Then you can join our Discord server if you want, but it's not mandatory.
Hurry up!!! Race 1 is tonight!
Z

Zigzagg310
Any one want to join a team with me and use the Nissan GT-R let me know
Click to expand...

You don't need a teammate, you can also register for your own
Z

Is there any rooms up you guys are running in

Hey, thanks for entering! Just wanted to let you know that use of the 2008 cars is not allowed. You'll have to use the 2016 Nissan GTR.

Hello. I'd like to register myself and @rbkLanny as a team. We won't be able to make all the races, but I'd like to be registered so we can participate when available. 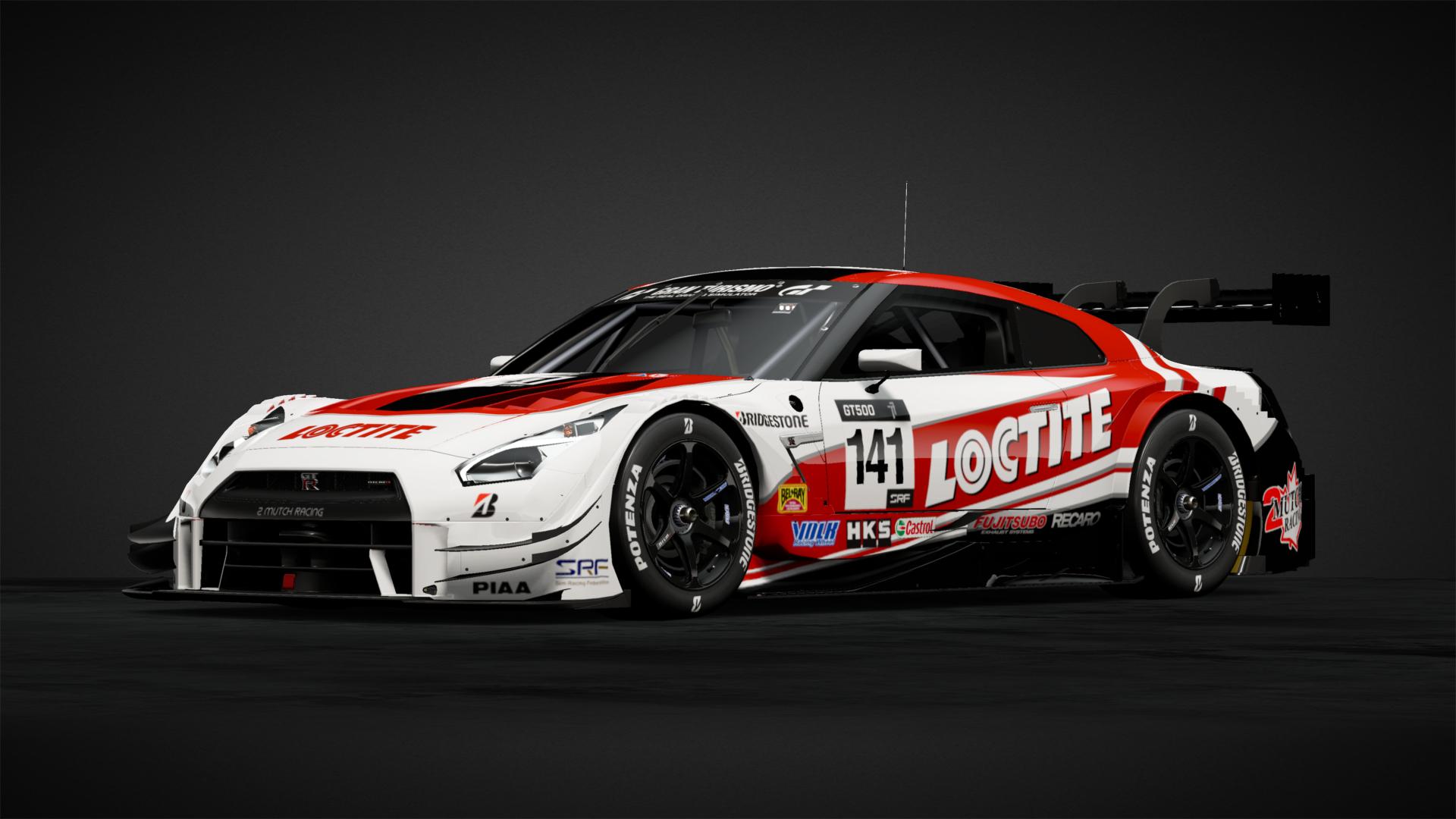 nuthunmuch
Hello. I'd like to register myself and @rbkLanny as a team. We won't be able to make all the races, but I'd like to be registered so we can participate when available.

I’m good to race the next race Correct

Today is RACEDAY at the Red Bull Ring! Join us on YouTube for the stream!
Z

Zigzagg310
Can some one tell me what time race lobby opens up at USA East cost time
Click to expand...

Zigzagg310
Ok thank you see you on track this weekend one last question what’s the specs for the 2016 gtr
Click to expand...

Thank you for the info
Z

I’ll be at next race
Z

How do I get surf decals and number plate

There’s links in the video description

Zigzagg310
How do I get surf decals and number plate
Click to expand...