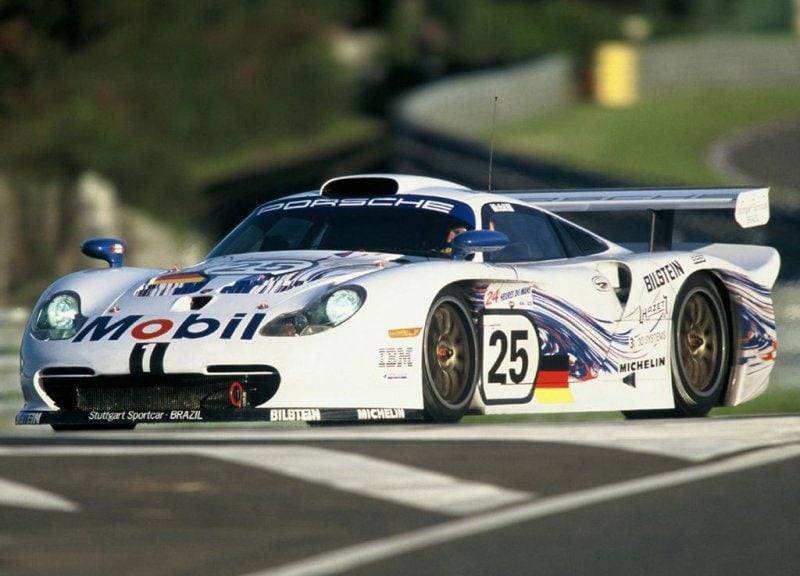 Since the heyday of the 956 and 962, Porsche had not fielded a Works racing team, but rather lend a (sometimes very big) hand in Porsche privateer efforts. A rare exception was the Dauer win at Le Mans with their modified 962 'GT1' car, which was a Works effort in anything but name on the entry sheet. For the most part, the German manufacturer concentrated on producing a racing version of the current 911 model, the 993. At that time there were two GT classes; GT1 for heavily modified production cars and GT2 for relatively stock racers. Both classes required a production minimum of 25 examples per annum.

Porsche's interest initially lay with the GT2 class, for which the current 993 model was relatively easily adapted. The likes of McLaren, Jaguar and Ferrari were left to tackle the GT1 class. In 1995 a number of the GT2 Porsches were modified in an attempt to promote them to the GT1 class with wider wheels and more power, but the gap was too wide to bridge. As a Porsche representative explained to British journalist Michael Cotton "it's a GT1.5 or GT1.4 at best". McLaren's overall win at Le Mans served as an eye opener and convinced Porsche that a 911-based GT1 car could indeed be a viable route to success.

Unlike its competitors, Porsche decided to design a racing car first and then adopt it for road use to meet the homologation requirements. One of the biggest problems of the 993 GT2 was the location of the engine that did not permit the use of Venturis. These were essential to achieve sufficient downforce on the flat bottomed car so the designers decided to rotate the six cylinder engine around, making the GT1 the first mid-engined 911. With its Porsche 962-derived 3.2 litre Turbo engine, it was also the first water-cooled 911. The flat six produced around 600 bhp, which was about the same as the BMW V12 in the back of the McLaren.

Another problem with the regular 911 was the heavy steel monocoque chassis at a time when the competitors all used more advanced composite structures. Here the money-strapped company had to compromise by using parts of the 911's steel structure combined with a center section made up of a reinforced roll cage. This did speed up the crash tests as much of the road car's nose section was carried over. Carbon fibre was used for the panels of the bodywork, which to some extent was similar to the 993. The car's racing intentions added a little more drama to the body in the form of a wide cold air intake in the nose, a scoop on the roof for the intercooler and a rather large rear wing.

While the engineers tried to carry over as much as possible from the regular 911 to save cost, most of the mechanicals had to be created from scratch. The original McPherson struts fitted at the front did not offer enough room for adjustment and were replaced by a double wishbone setup. The rear end was completely new and as such required a custom made suspension, consisting of dual wishbones and an advanced push-rod actuated spring/damper setup. Installed the wrong way around, the gearbox also needed attention to prevent the car from having one forward and six reverse speeds. Most of the road car's dashboard and electrical systems were carried over.

The first 993 GT1 racing car was completed early in 1996 and hit the track in March that year. The production of the virtually identical road cars was postponed to the end of the year; the new racing car was in high demand with the company's many privateers. In the first half of the season, the GT1 only saw testing action and it was not until the 24 Hours of Le Mans that the new racer first saw competition. Entered by the Works, the two GT1s finished first and second in class, and second and third only to the Porsche powered TWR WSC95 prototype. Porsche completed the successful debut season of the 993 GT1 by taking victories in the final three rounds of the BPR championship.


The sport's governing body, the FIA, had taken an interest in the action-packed series and for 1997 the FIA GT Championship was introduced. This had even more manufacturers interested and quickly Mercedes-Benz announced their intention to enter the championship with a V12 racer. Another problem for Porsche was the FIA's announcement to restrict Turbocharged engines, leaving the Germans to compete with 50 to 60 bhp less. To counter the new competition and rules, an EVO version of the GT1 car was developed. Now mimicking the new 996 style, the EVO's body was more aerodynamically advanced. Other changes including a considerable track increase required Porsche to build another batch of homologation specials.

The changes didn't prove sufficient for the 996 GT1 to be competitive in the new FIA GT Championship against the Naturally Aspirated competition. Le Mans was a different story and without the FIA's air restrictors Porsche was again at the top of its game. Shortly into the race both Works cars were leading the pack, but in very un-Porsche like fashion neither car managed to make it to the finish. The company's honour was saved by Joest's TWR WSC95. With nothing but purpose built racers taking part, the homologation requirements of the GT1 had become a bit of a joke. For 1998, the rules were drastically changed and road car requirements were all but scratched. At Le Mans the second generation GT1 cars were labeled for what they really were; prototypes.

Porsche jumped at the opportunity and the engineers threw all caution to the wind; they set out to develop the car that the first GT1 should have been. Lower and longer than its two predecessors, the 1998 evolution featured Porsche's very first full carbon fibre monocoque chassis. It was obviously lighter and stronger than the steel mix used in the previous versions, but also offered the opportunity to install a more advanced front suspension. The displacement of the six cylinder engine was increased very slightly and mated to a new sequential six speed gearbox. It was a major step forward, but the competition had not stopped working either and now Toyota had also entered GT racing.

In the FIA championship the restrictors again hampered the two Works Porsches, which were not able to keep up with the Mercedes-Benz CLK-LMs. At Le Mans it was now really up to the GT1 car as the TWR WSC95 was starting to show its age; not surprising since its initial design dated back to the early 1990s. In qualifying, a single Toyota and both CLK-LMs were faster than the Porsches, but in the race things finally turned in the GT1s favour again. Even though small problems required lengthy pit stops, both cars managed to finish on top and only one lap apart. The sixteenth Porsche win at Le Mans was a fitting gift as the company celebrated its fiftieth anniversary.

For 1999 a Naturally Aspirated V10-powered replacement was on the drawing board and one was most likely constructed before Porsche decided it was time to retire from racing and instead spend their resources on the development of the Cayenne Sports Utility Vehicle. That decision was a big blow for enthusiasts around the world, but the Cayenne's success made Porsche one of the most profitable manufacturers. A modified version of the V10 engine was later used in the all-carbon Carrera GT supercar. After 15 years of selling customer racing cars, Porsche re-established their works team fielding a GTE specification 911 in 2013 ahead of launching an all-out charge for outright victories with a bespoke LMP1 car.
SPECIFICATIONS 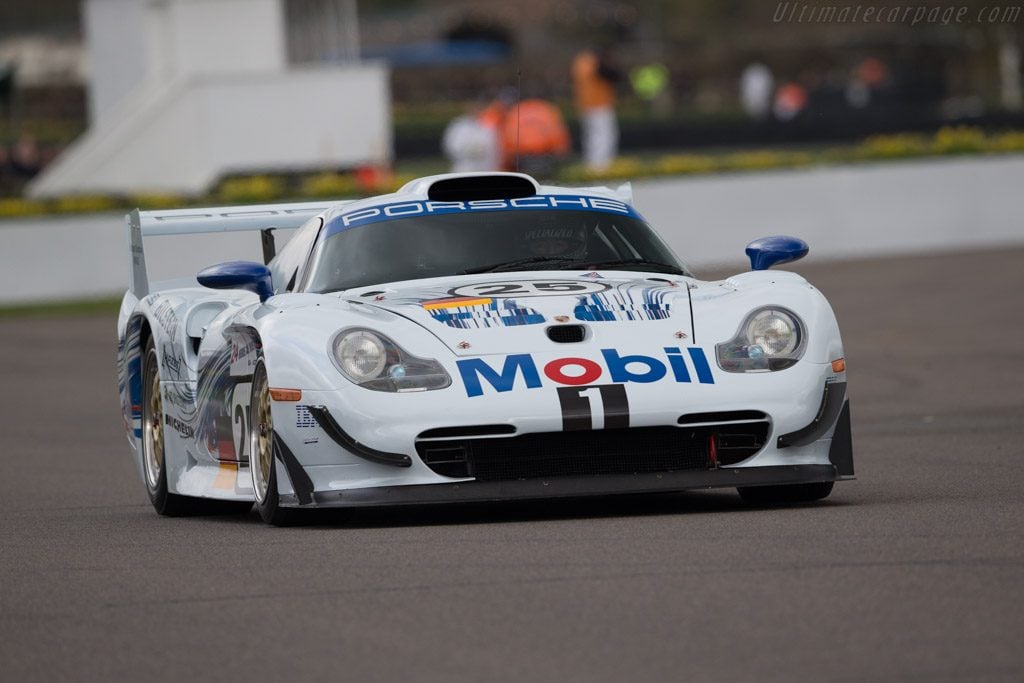 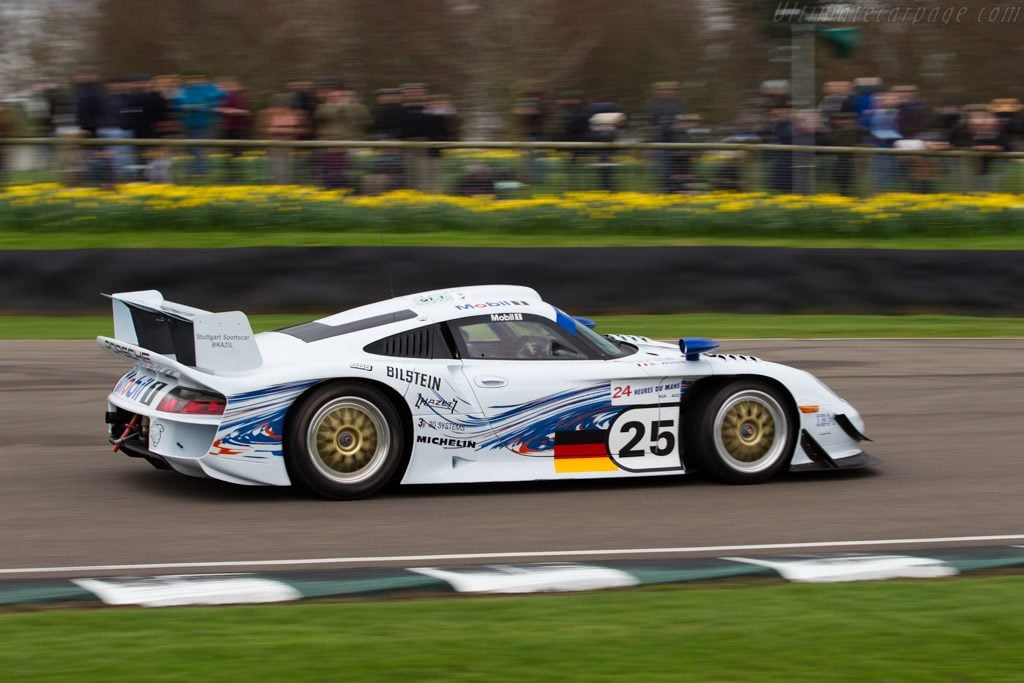 Since the new trailer confirms that CLK-GTR is Gr.2, I updated this one along with TWR Porsche WSC-95 and Dauer 962 Le Mans GT1 to Gr.2.

Cristobal1234
Since the new trailer confirms that CLK-GTR is Gr.2, I updated this one along with TWR Porsche WSC-95 and Dauer 962 Le Mans GT1 to Gr.2.

Not sure why you had to also change the WSC-95's class to Gr.2, since it is a(n open top) prototype that might still fit into Gr.1 (the 911 GT1 and 962 Le Mans were silhouette racers), unless you did so based on power/weight rating alone.

tankuroded
Not sure why you had to also change the WSC-95's class to Gr.2, since it is a(n open top) prototype that might still fit into Gr.1 (the 911 GT1 and 962 Le Mans were silhouette racers), unless you did so based on power/weight rating alone.
Click to expand...

During mid 90s, open top protoypes used to be much slower and most of them would achieve qualifyng times above 3:45 on La Sarthe.