Been writing race reports for years for various Gran Turismo games, but weirdly despite having the game for a while now I've never investigated Tourist Trophy...until now. Maybe I got disheartened when I saw the meagre amounts of opponents in each race...FOUR?!

Like four ants circling the M25, it can take a while to even see another bike, let alone race them.

So combined with the chronically stupid AI (yup, you can tell this is a Polyphony Digital game) means the game is a bit too easy. Unless you're me, who's spent years deliberately looking for challenge in other GT games...time to do the same here.

So my first attempt to actually make a challenge out of a race starts now. Ladies and gentlemen, welcome to...

(Hat tip to AMG as always for the track map)

A tight little series full of whizzing, buzzing 250cc machines, so you'd think in such restrictive conditions for engine size and type that choosing a bike to create enough of a challenge would be difficult. But then whilst attempting the Clubman Cup, I happened to be awarded this classic as a prize, and suddenly, I had my weapon of choice. Yeah. 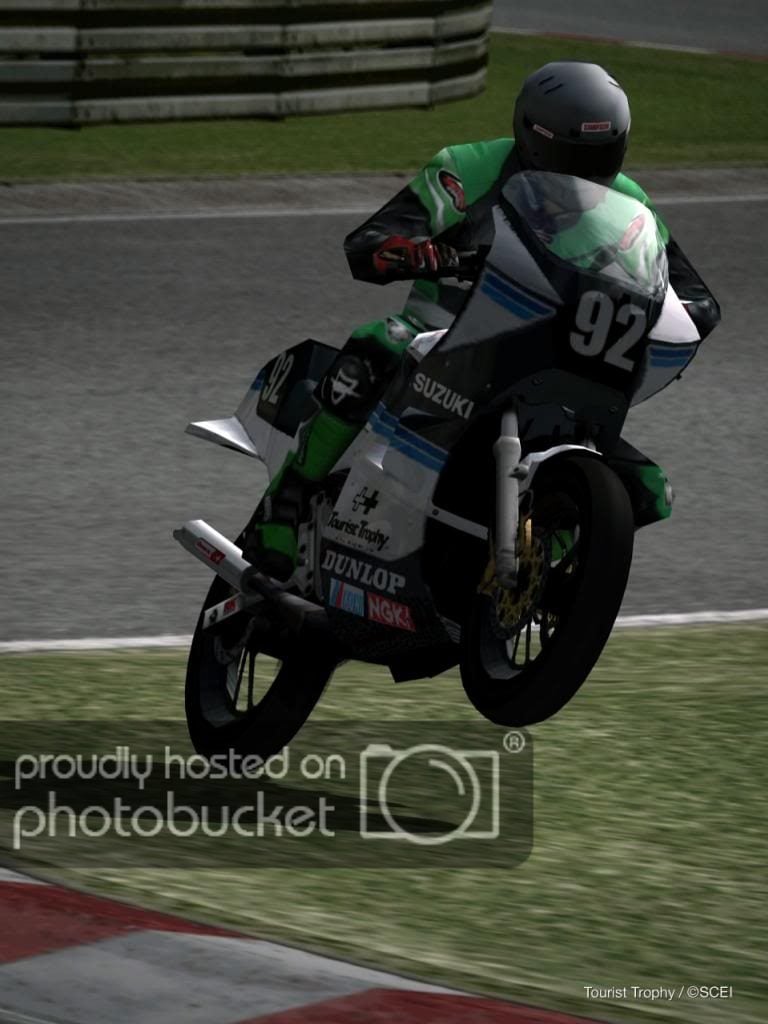 Being an older bike it requires some wrestling to hit the apexes, and despite having equal-ish horsepower to it's rivals it cedes a notable amount of top speed to them due to having a short final gear - which I wouldn't change. Just to keep things interesting.

The old girl and I rolled out onto a grid and took the warm-up lap with three mean, more modern (although not that much) machines ahead of us. An old bike allied to a relative novice to bike racing having recently switched from four to two wheels - the odds weren't in our favour.

The flag drops, and we're away for five punishing laps. Here we go! 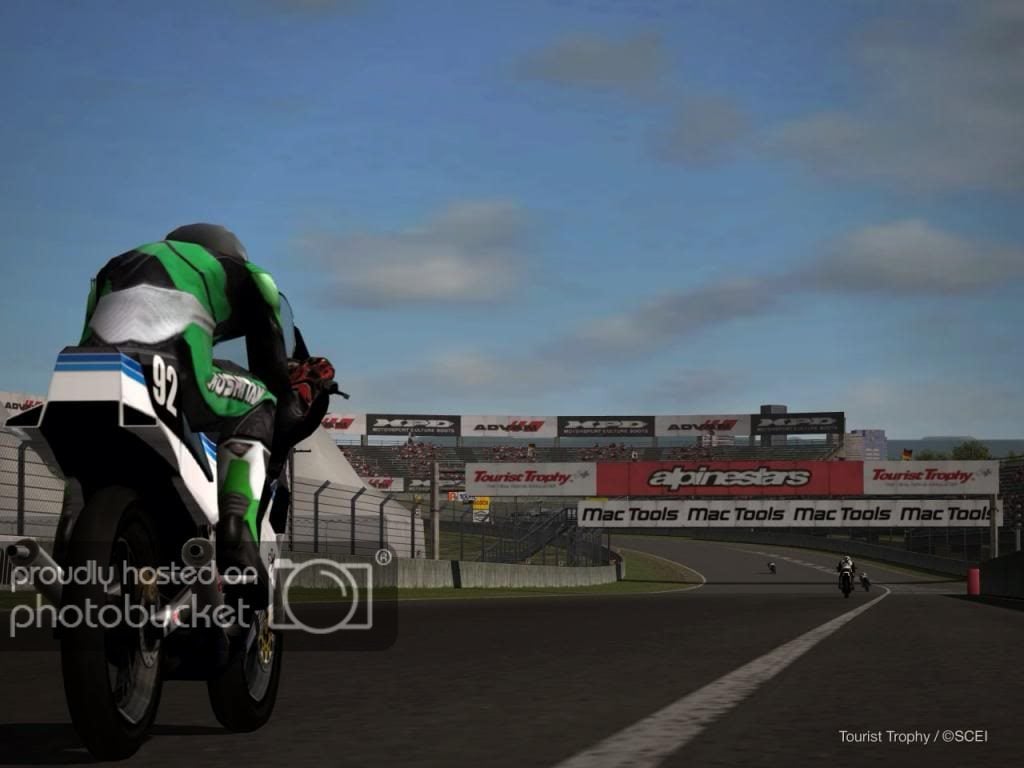 I start about 6-7 seconds down the road from the leader, and I absolutely cannot afford to loose any time. So I charge up the road and dispatch of the #33 RZ250 under braking for T3 and 4. The rest of the lap is spend relentlessly chasing down the #68 Yamaha, just about catching a brief tow off the final corner at the end of the lap. Interestingly, I can get a tow and slingshot by despite my low top speed. Just means I hit the redline quicker, and hold off the other bikes blasting back by for a few more seconds. Interesting... 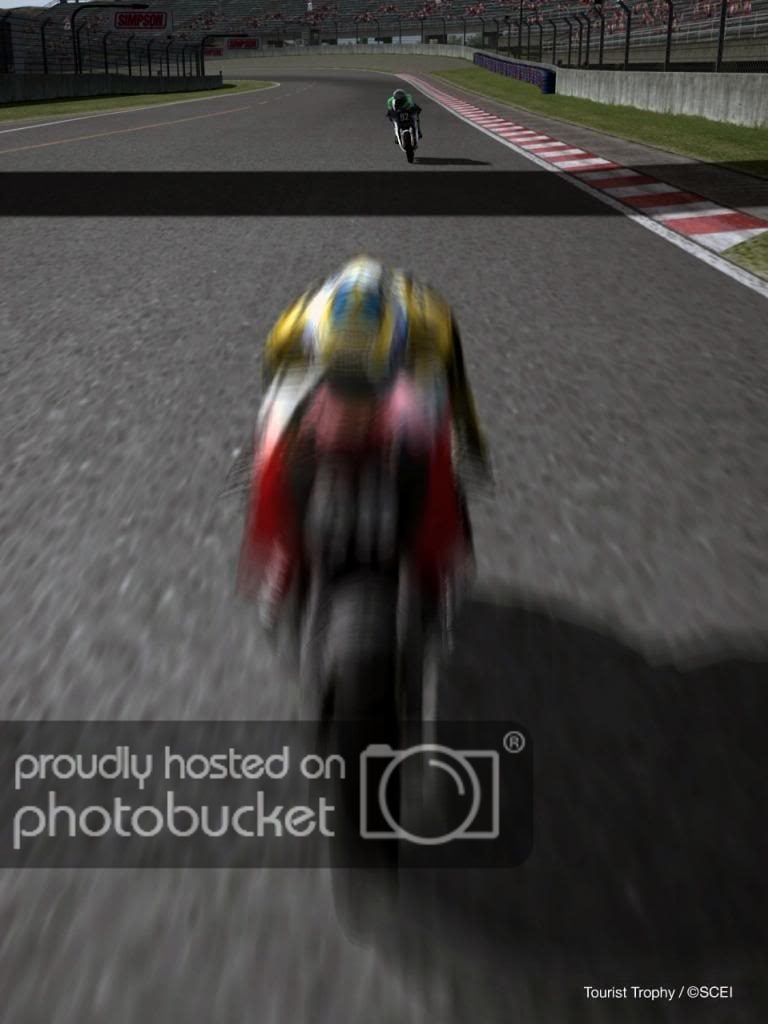 For now time is still of the essence, so I hurridly attempt to dispatch the #68 Yamaha under braking for the Turn 7 Hairpin. Not a good move, as he cuts right onto the racing line (as PD AI does) and I get barged up onto the grass, leading to this spectacular off-road wheelie! 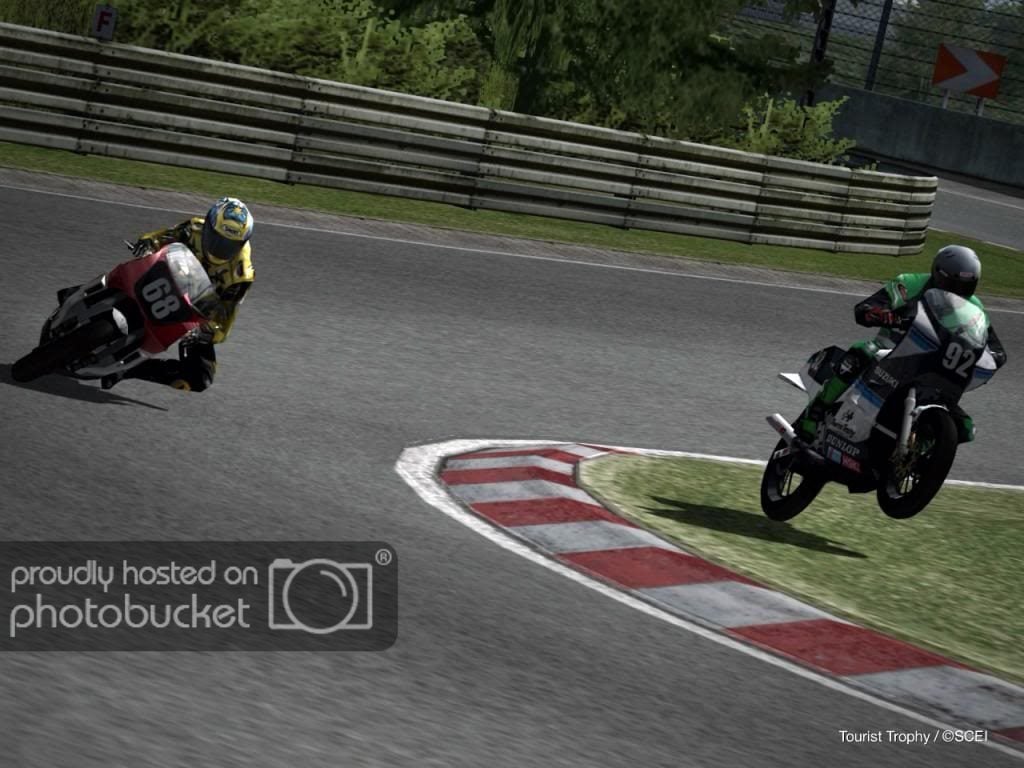 As spectacular as that looks, it did result in me running out very wide and loosing the position I'd briefly gained. No need to get impatient, so I wait until the end of the lap and experiment with this slingshot technique. And to my surprise, my asthmatic Suzuki breezes by! 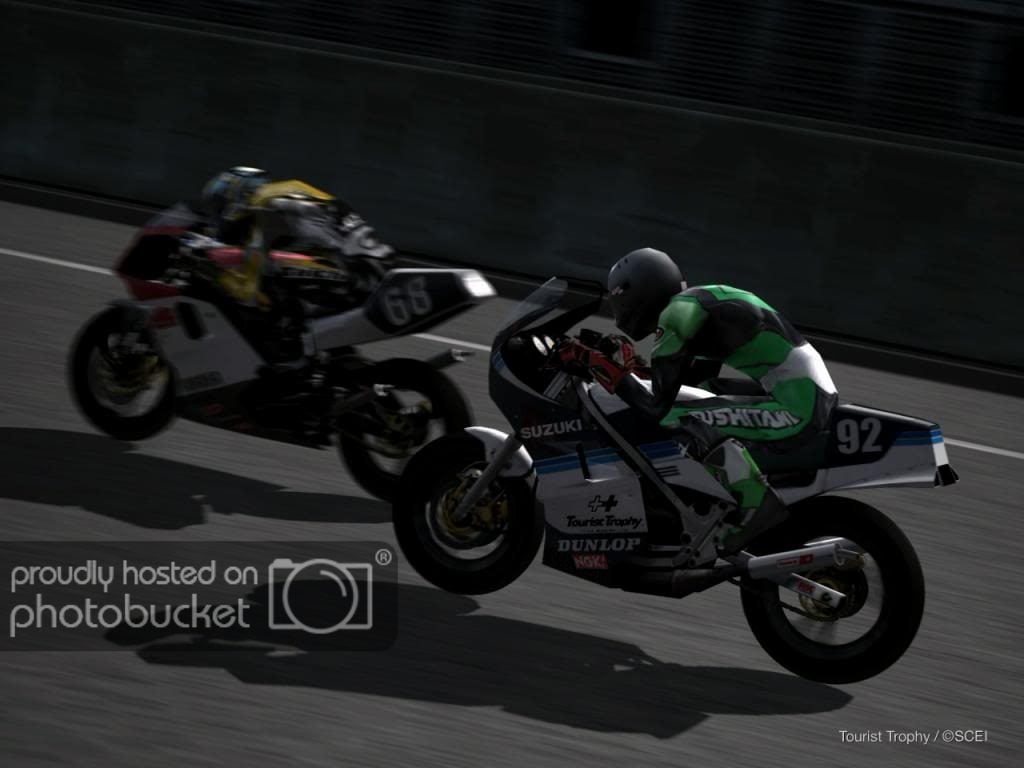 I keep looking behind me expecting the #68 to come blasting back by...but it doesn't come! So I shrug and go into T1...before suddenly realising my racing line was being occupied by an angry Yamaha! 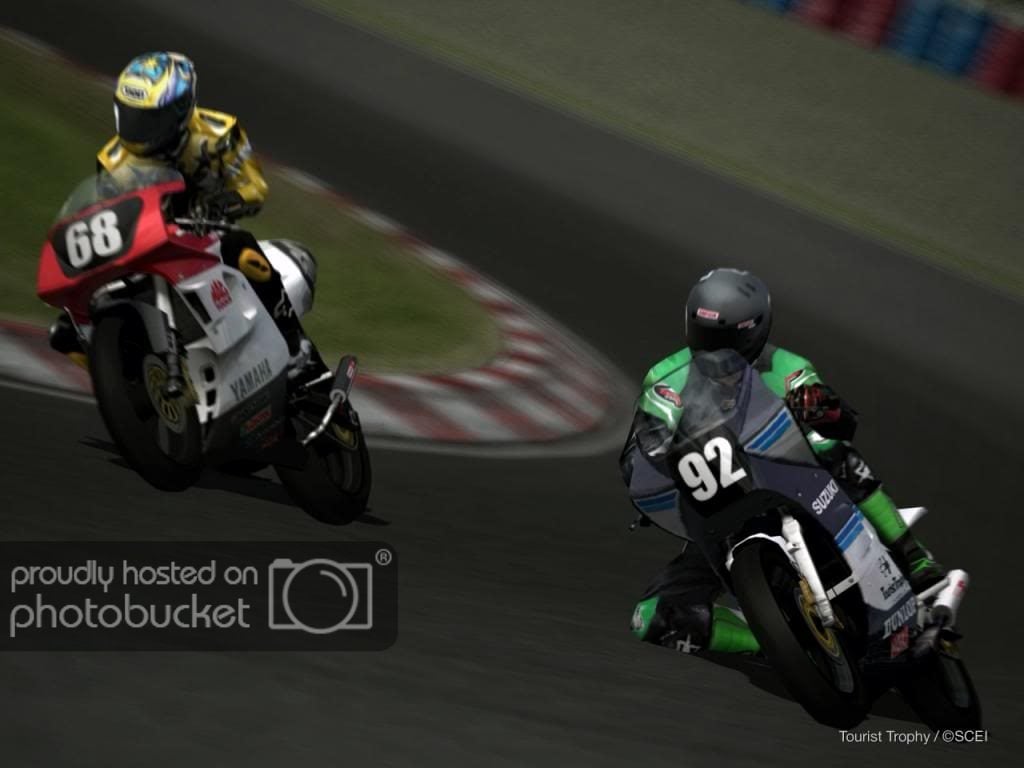 I manage to recover my line and power away, and settle in to chasing down the lead Honda. Worryingly, my tires are ALREADY giving up, and midway through lap 4, they turn an angry shade of orange. But just as I'm panicking about my rubber, I notice the gap to the lead has shrunk from 3 to 1.1s in the space of a lap and a half - someone else is having rubber issues... 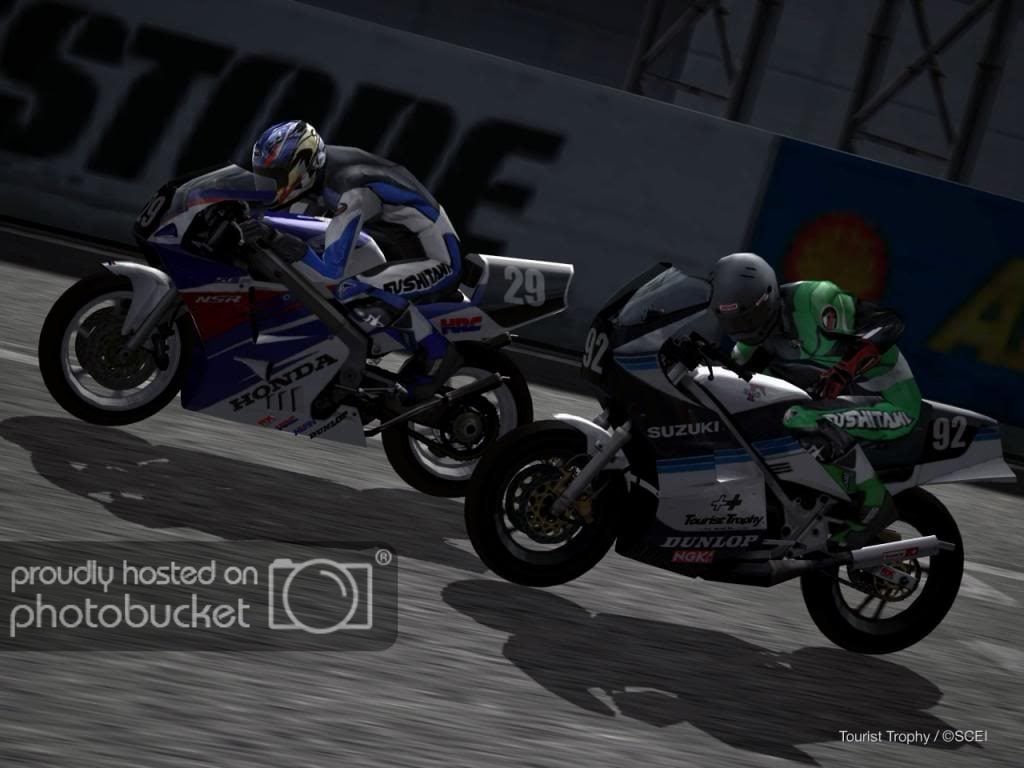 By the end of lap 4 the gap has closed to absolutely nothing, and all is set for a last-lap duel of the fates. I hitch a tow on the main straight but don't make the pass just yet. Time is running out for the both of us, and any grip from our 4 collective tires has made a run for the emergency exit. This is gonna be an interesting final lap 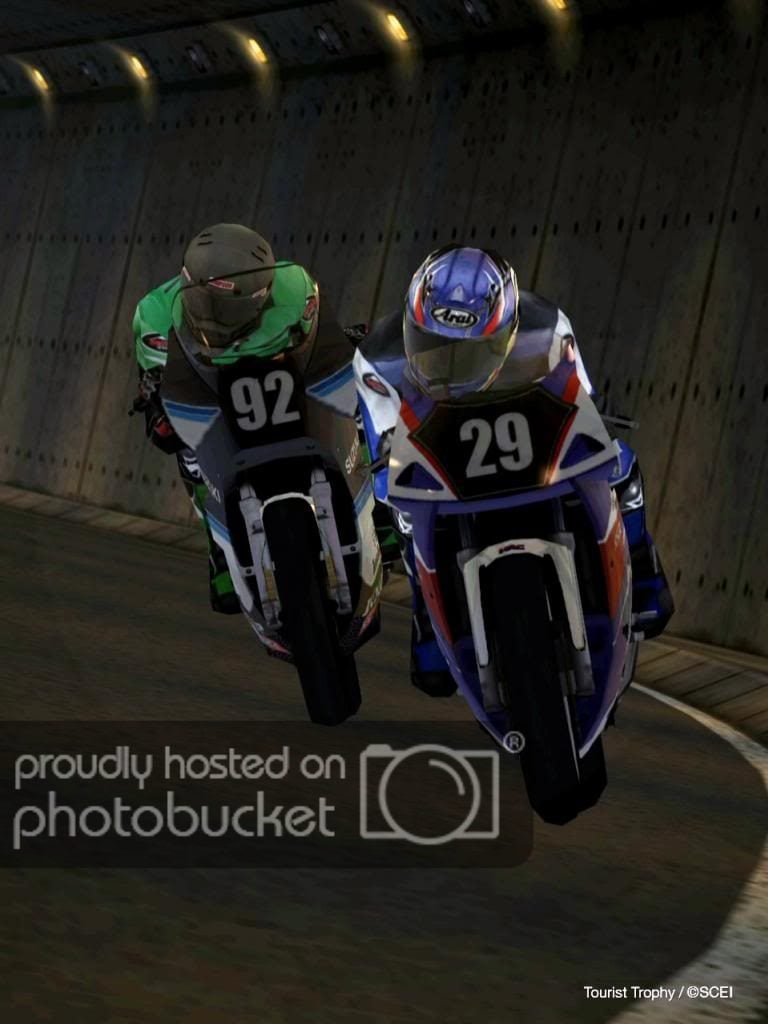 My best chance I figure is through the first half of the circuit, under heavy braking points. But if there's one thing the PD AI are good at, it's belligerently sticking to their racing line and defending a corner to the hilt. And because this isn't Gran Turismo, you can't just stick the nose up the inside and nerf the guy or risk contact, as I found out at the Turn 7 hairpin. The door is shut in my face and I damn near replicate my lap 2 wheelie before nearly high-siding off on corner exit! Failure flashes before my eyes, but I hold my bucking bronco steady. Just

I have to go for broke under braking at Turn 9, but yet again the Honda is at the apex before me. There just isn't any shifting him. Now we're flat out to the line, I'm not sure there's any way through for me. Damnit, I've blown my chance. 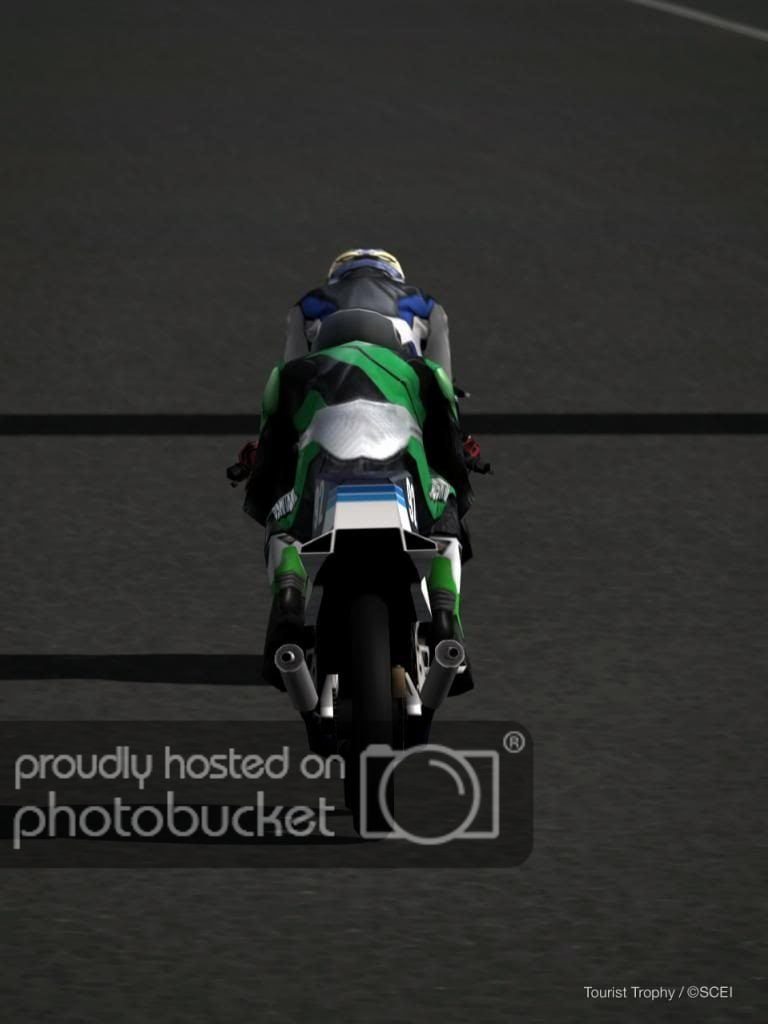 Oh well, I can try catching a tow down the straight... 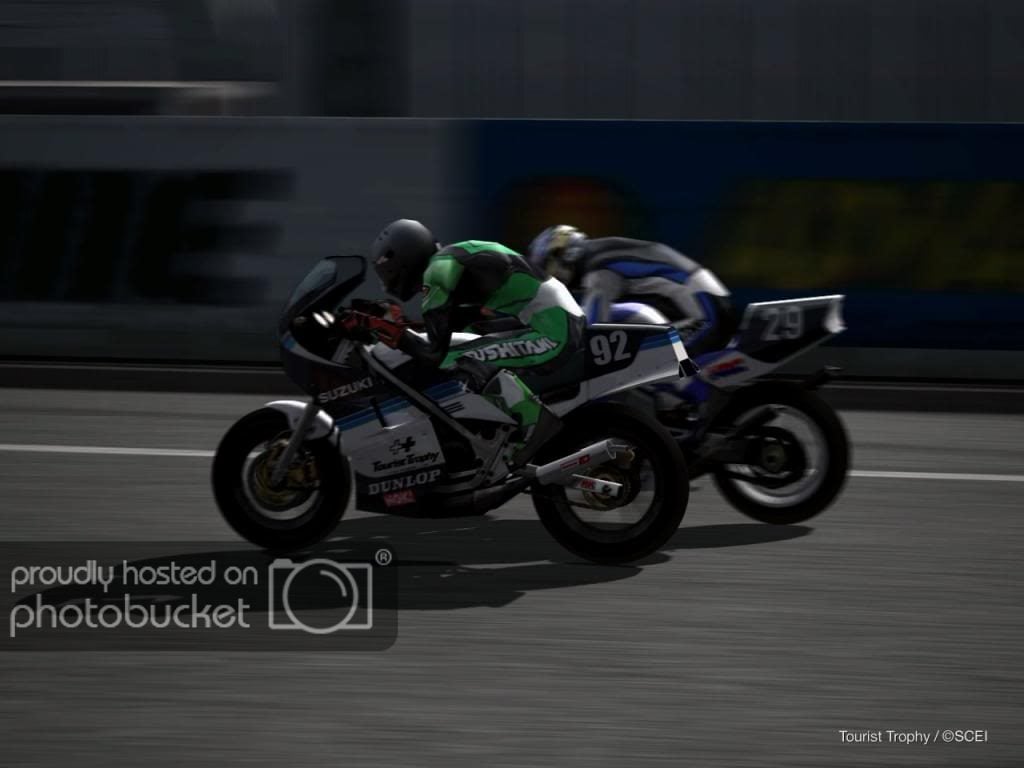 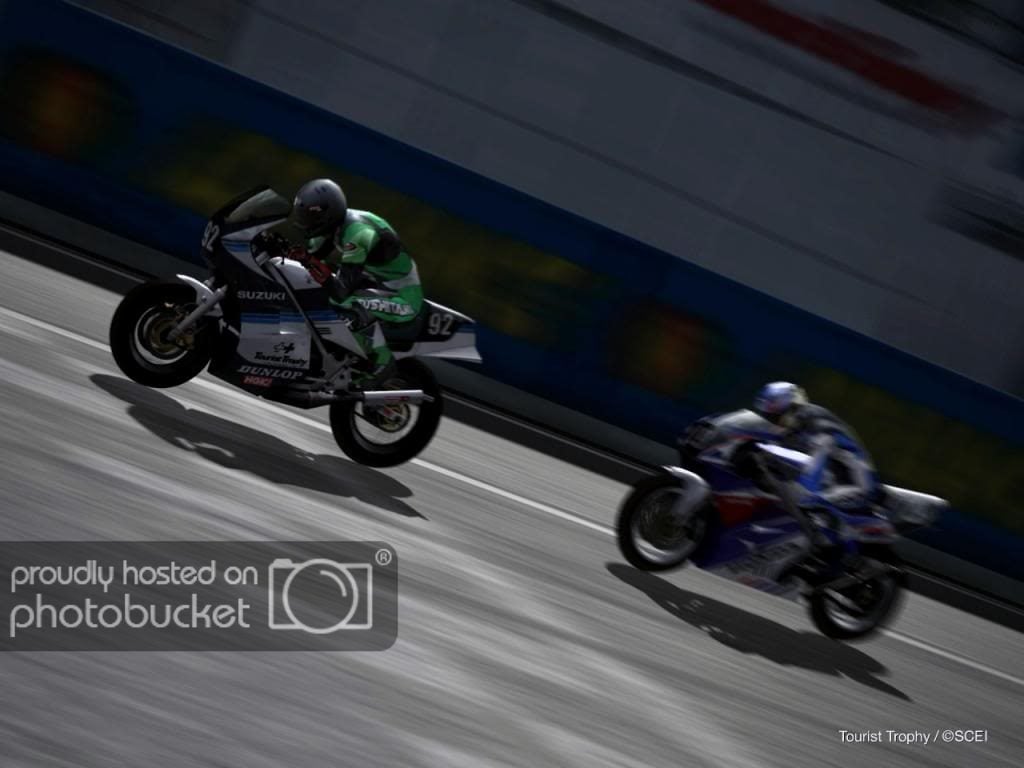 YESSSSS!!!! VICTORY SNATCHED AT THE DEATH!!

So a first win in the championship and man did me and my plucky Suzuki have to work for it. Some awesome racing, despite the pathetically low grid count - jeez PD, imagine how epic a race like that would be if you times the grid size by say, 4? 5?

Never mind. Race 1 is won in the 2-Stroke Series, and if I win Race 2 at Autumn Ring, I can afford to finish as low as 3rd in the final round at Fuji (a very speed-orientated track that will suit my bike even less than Grand Valley).

Tune in next time to find out how Race 2 goes! Thanks for reading

Nice, reminds me of this.

Thanks guys! I noticed there wasn't many (if at all) race reports round here so I decided to do a few as I work my way through the game

Bopop4
Nice, reminds me of this.

See PD, imagine how awesome the racing would be if you had a grid that size?!? I mean 6-car grids in Gran Turismo is just about excusable, but 4 bikes?!?! Bah.

(also on an aside - I love how casual the commentator is at the end of the video about a guy getting hit in the back of the neck by a bike - I honestly thought that guy had died! Then he just appears smiling

Falcon787B
(also on an aside - I love how casual the commentator is at the end of the video about a guy getting hit in the back of the neck by a bike - I honestly thought that guy had died! Then he just appears smiling

''Just a few cuts and bruises''

Nice little write-up, by the way! Beware going off-road next time though.

So Round 1 in such a tight series is done. A second win will incredibly be enough to wrap up the championship - with such a tiny grid (did I mention that the grids are way way WAY too small?

), even finishing 4th and dead last gives 3 points, so a win today means the title is mine whatever happens at the final round in Fuji. So today is a decisive battle. My Honda-riding rival needs a victory to stay in contention. The stakes are high - just how I like 'em!

(Hat tip to AMG for the track map

So, same grid as before. Same bike as before. Only change this time is that I'm on a medium tire on the front, hard on the back, considering that my soft tires were shot to cheese by the end of lap 3 in testing - and tires are gonna be getting a workout on the incredibly twisty little track. So let's get ready to rumble! Or buzz, in the case of these little 250cc bikes 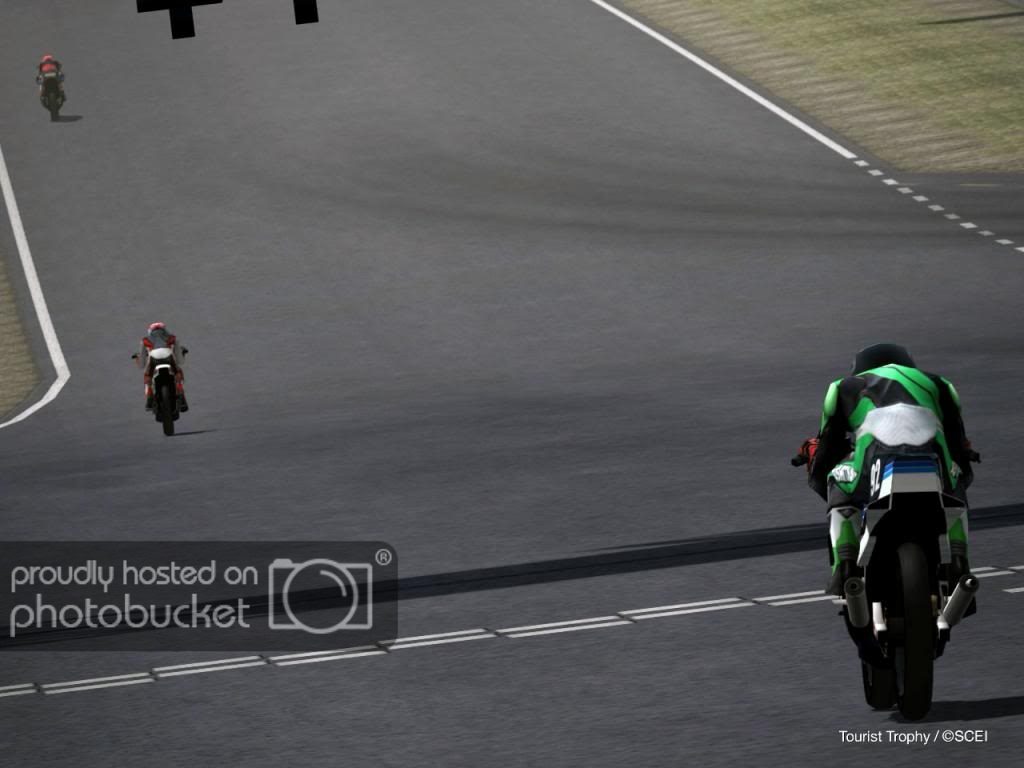 Just as before I power by the RZ250 in the opening corners, getting down to brass tack early doors. I thought erroneously that my bike would be better in corners, but if anything it's actually worse - and worryingly my rival is even better in the twisties in the early going. I trail by up to 6 seconds at the end of lap 1, but I press on and chase down the 2nd place TZR250SPR...RM. Talk about acronym hell 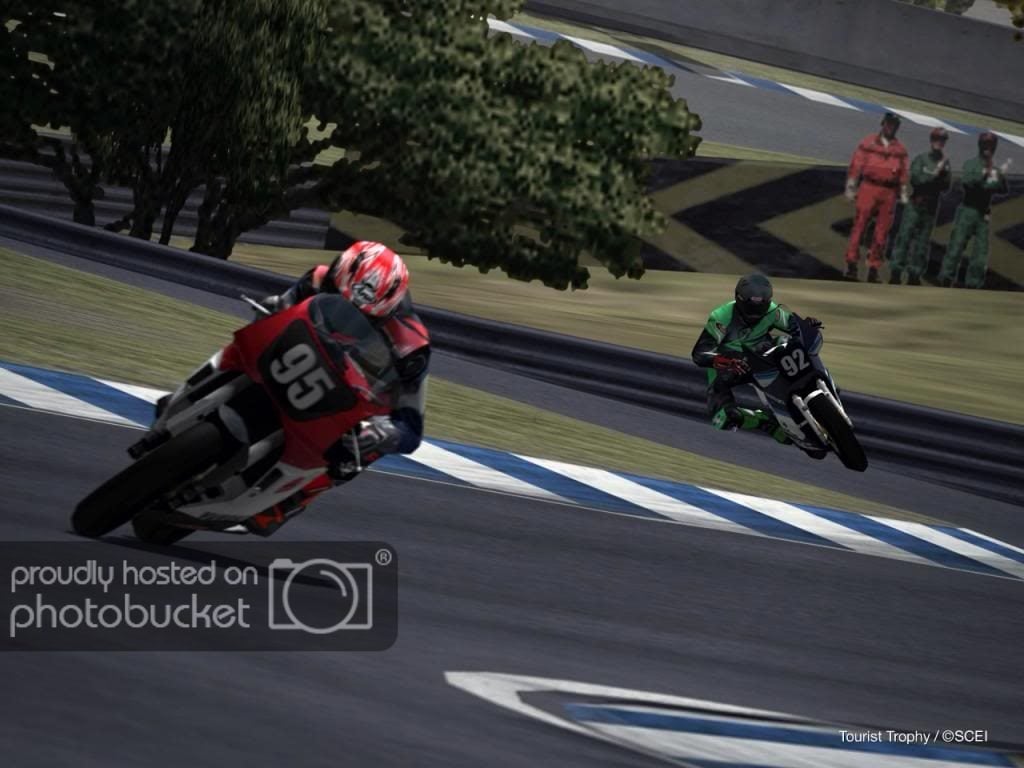 Turns 6 and 7 are very tricky for me to navigate, but a slow in fast out approach seems to work best, and it's what powers me by the Yamaha into 2nd midway through lap 2 - confusingly with a different number from the first race?! What was wrong with #68? 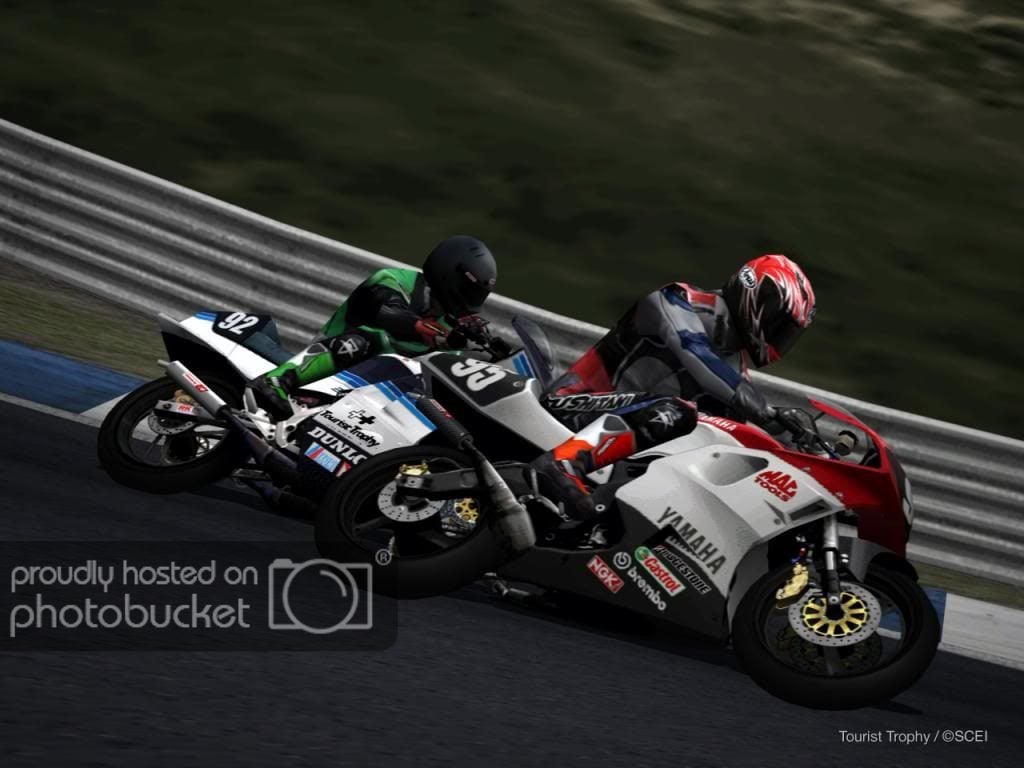 I then had a flashback to Grand Valley. Turns 9, 10 and 11 are huge fun when you get them right, but this time I turn in a fraction too early (Caught out by my bike not understeering for once) and headbutt the rumble strip, sending the front wheel flying up in the air again! Wheelie! :cool: 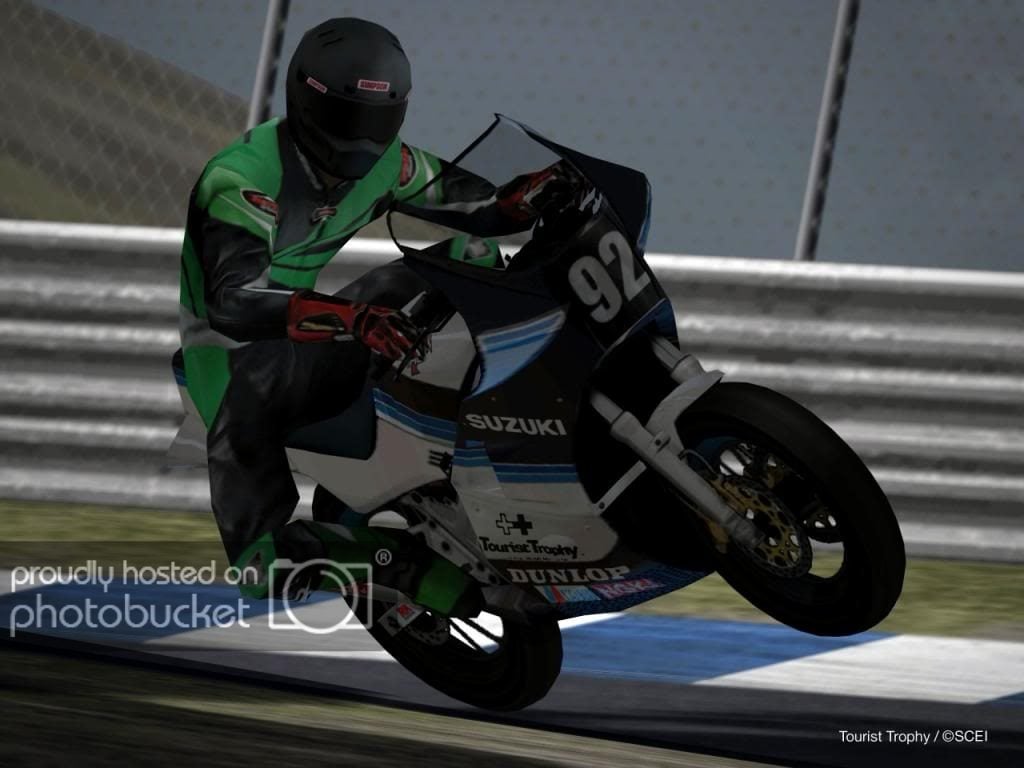 I have to take a few corners to compose myself, and by the end of the lap my opponent is still 5.3s up the road. Time to really knuckle down and wrestle my ageing machine around the twisty track. You really need to work hard to get this bike turning in through the corners, but powering down out of the corner my little Gamma is strong. And crucially my tires are holding up a lot better this time. Which means by lap 5, the gap is down to 1.2 seconds. I am within touching distance now... 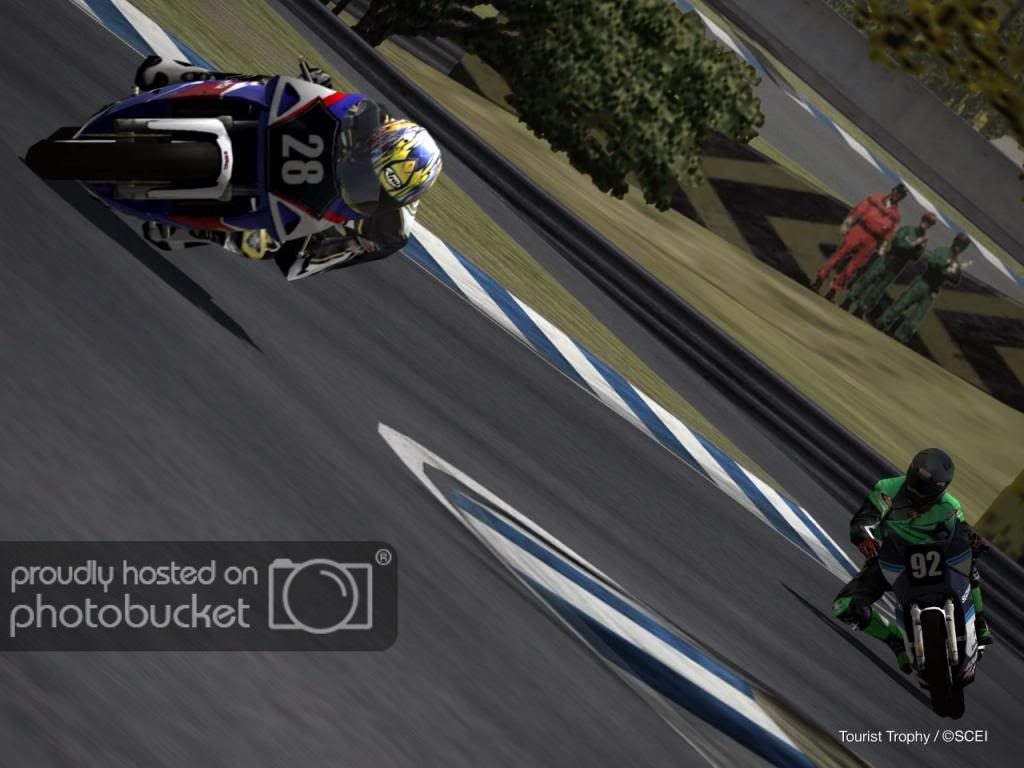 I close right up under braking for the Turn 5 hairpin, and as we plunge down the hill I get a good run through T6. The lead Honda leaves a gap on the outside, but halfway down the short chute between T6 and 7, he swerves right in front of me and cuts me off, nearly sending me into the grass! 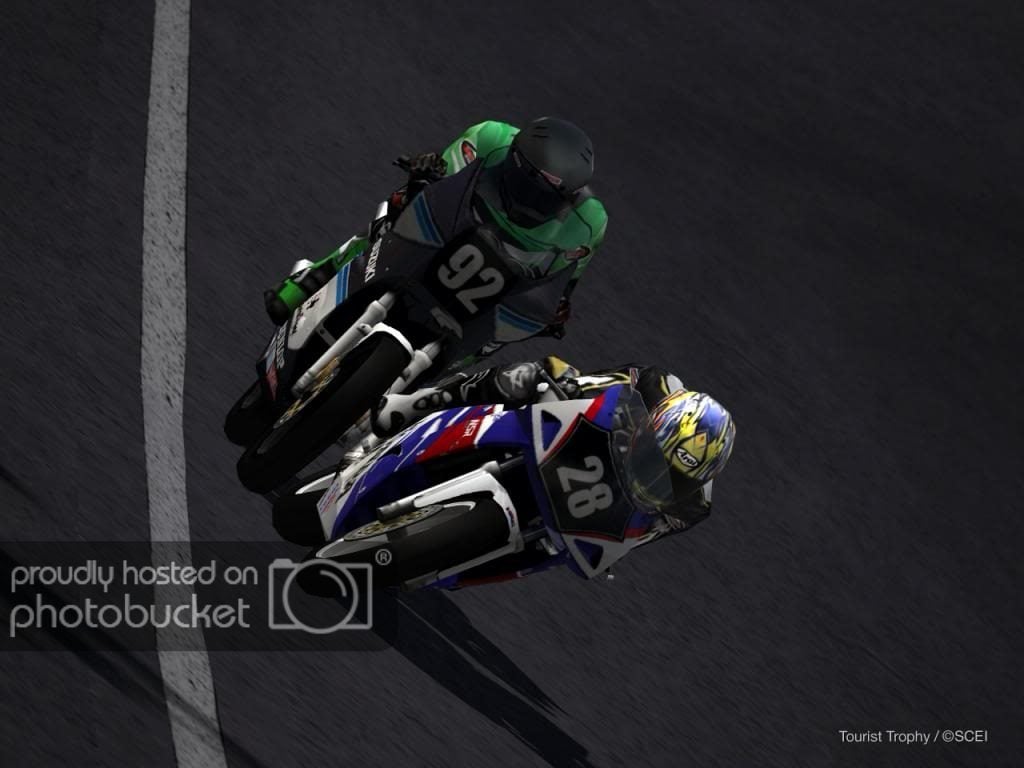 He jumps away again briefly, but a good run through Turn 7 gets me back on his rear wheel. He leaves the door open again on the inside of the long carousel Turn 8, and this time I have absolutely no qualms about shoving my front wheel right up the inside. I don't care what he does this time, he's NOT cutting me off again! 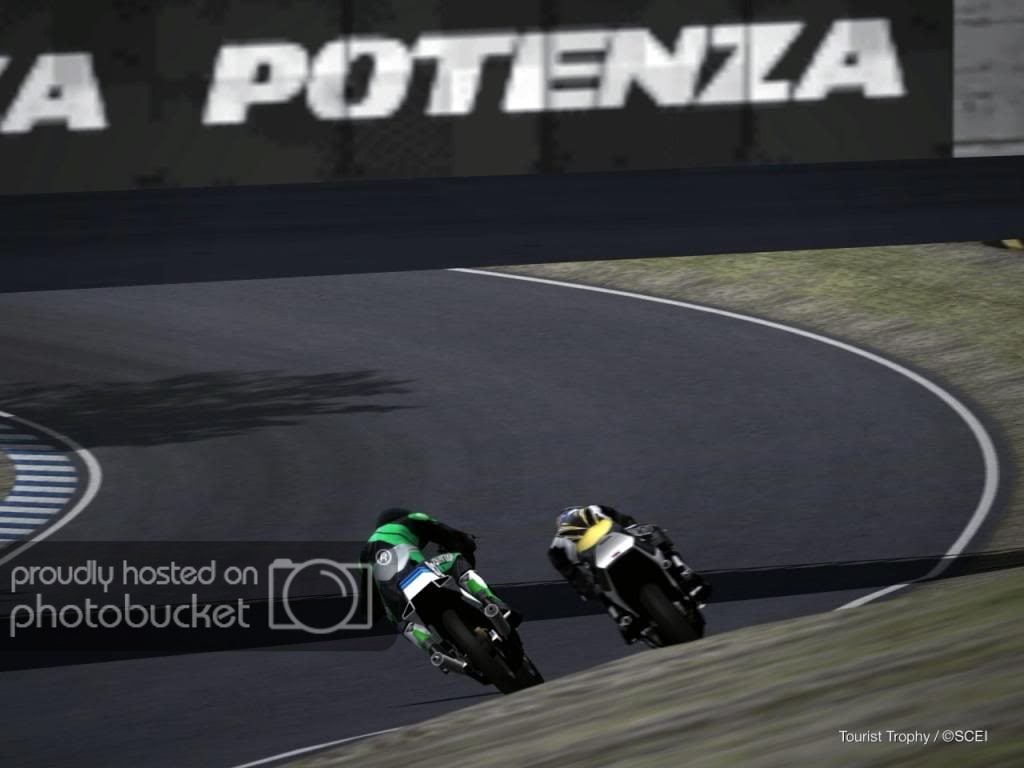 Midway round the corner, the Honda turns right back into the apex. But unlike all the previous times he's done it, my handlebars are halfway up alongside him! You want to race me rough, try some of this! 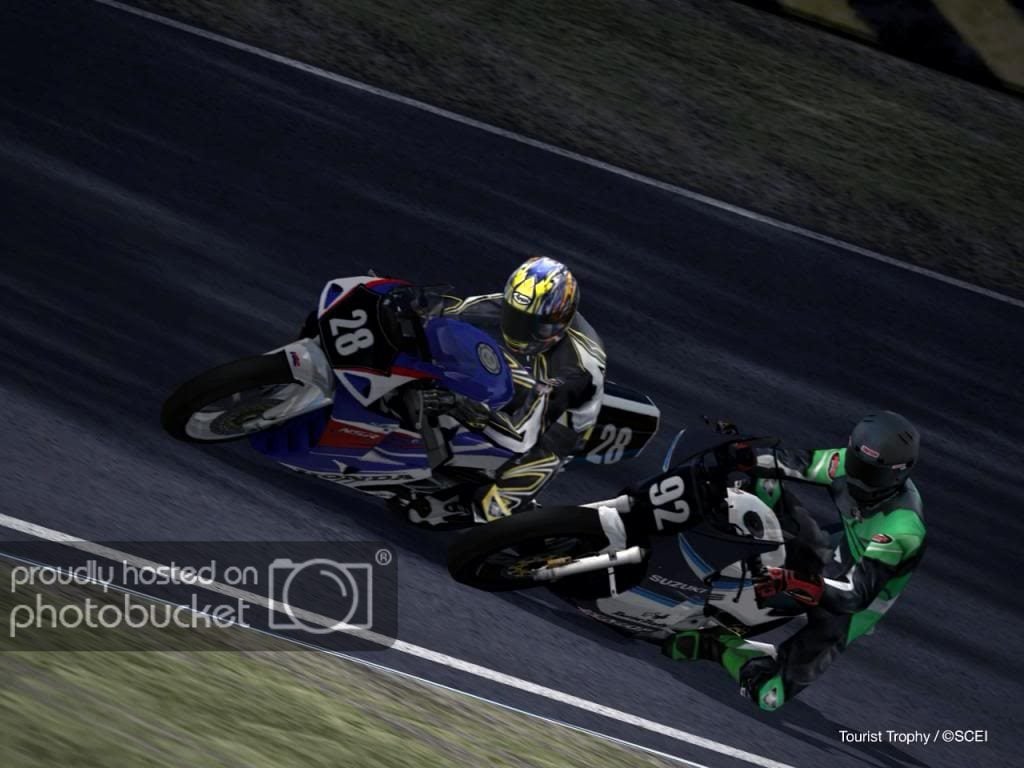 He gets badly stood up by this action, slows and runs wide, and I charge off into the distance! Victory and the 2-Stroke title are now in sight! :cool:

(On an aside, why don't the PD AI bikes stand up mid-corner? In real life when a bike goes up the inside and forces them wide they stand up more, in this the AI bike just slides wide without changing body angle at all. Just looks unnatural 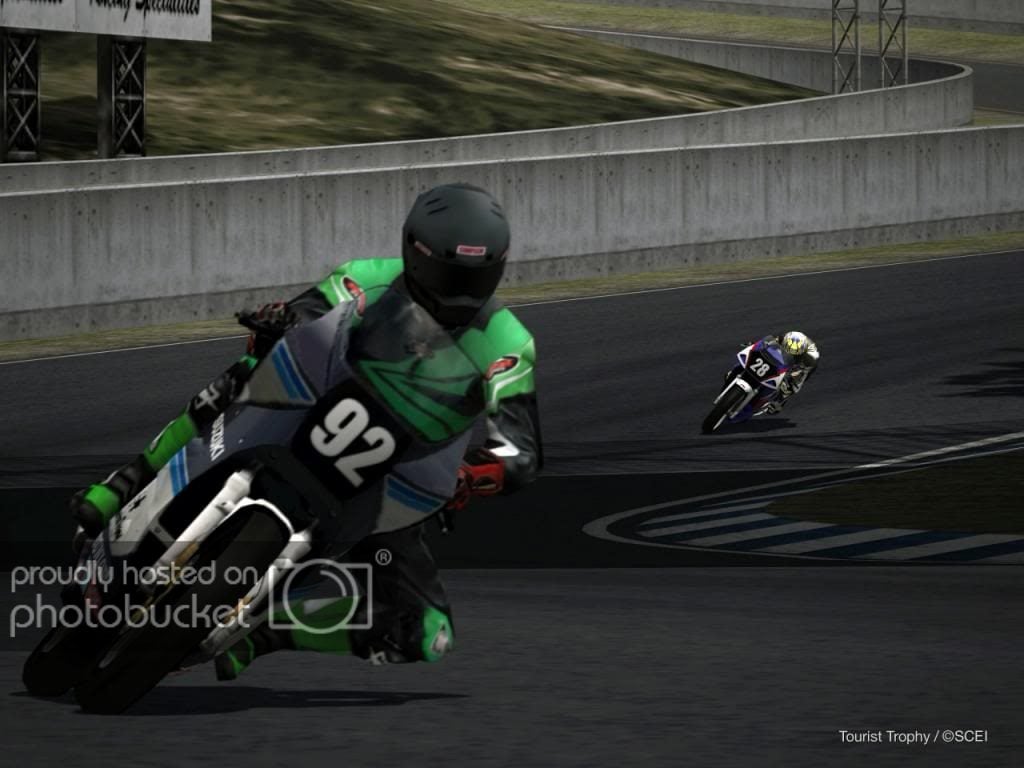 He gives desperate chase, but all hope is lost - I cross the line 0.9s ahead to clinch the championship!! 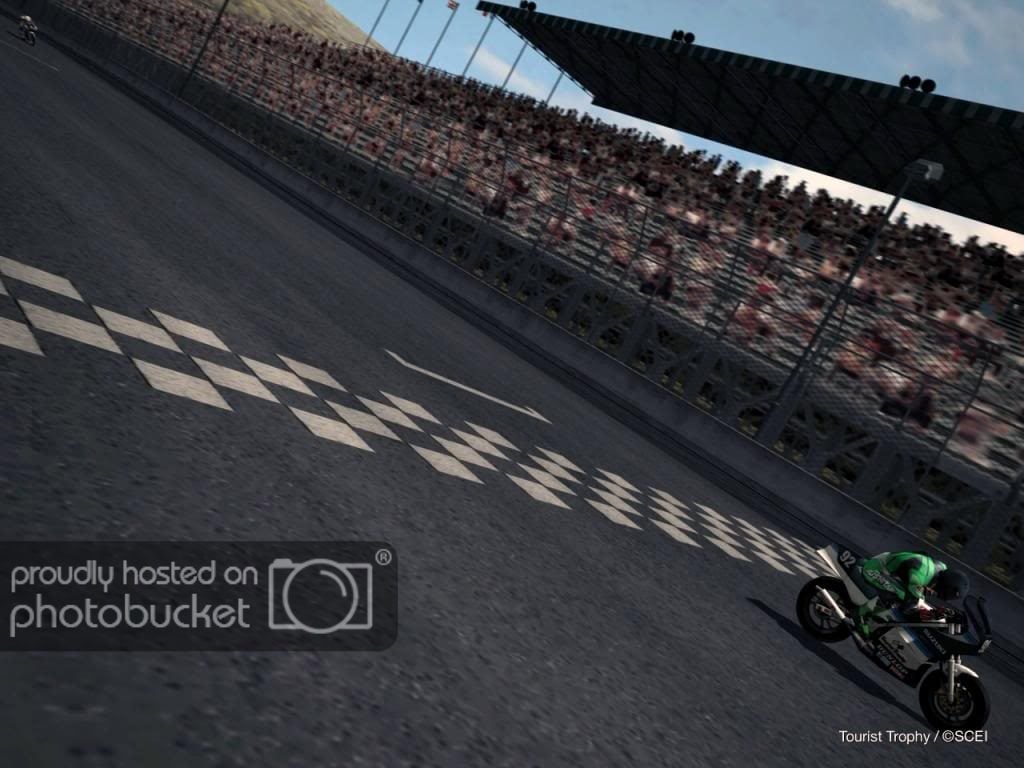 Another race I had to work hard for. That was good fun! Would've been more fun with more AI opponents, but hey...

Anyway, as I said above, the title is mine! Even if I finish last at Fuji in the final round, I'll still get 3 points, meaning that even if Honda man wins, he'll only have 22 points to my 23. Obviously me being greedy, I want to go for the sweep! I'm in confident mood - can I do it on the long straights and fast sweeping turns of Fuji Speedway (80s)? Tune in next time to find out!

Get your rider hanging off the bike more, this isn't 1962.