I'd be quite surprised if the Apple car does not have WiFi inside. It would seem logical, so anyone can use any Apple device while in the car.

Rumor mill suggests the Apple Car has been shelved and the project will focus on autonomous software.
http://www.ibtimes.co.uk/apple-puts-brakes-project-titan-car-plans-1586799
https://www.bloomberg.com/news/arti...aled-back-its-titanic-plan-to-take-on-detroit

AudiMan2011
Rumor mill suggests the Apple Car has been shelved and the project will focus on autonomous software.
http://www.ibtimes.co.uk/apple-puts-brakes-project-titan-car-plans-1586799
https://www.bloomberg.com/news/arti...aled-back-its-titanic-plan-to-take-on-detroit
Click to expand...

So they want to worm their tech into other peoples cars (like Car Play) rather than build their own. I guess it's a safer option but I was looking forward to seeing what they came up with. Apple are not in exactly great shape at the moment and probably don't want to take the risk, especially as Tesla is not exactly stable yet either.

I can't help feeling that Apple were probably trying to overcomplicate things.

People seem to have it in their heads that Apple are massively innovative but I'm not sure that's really the case. What they're good at, and what they've always been good at, is product design and user interface. And they have one of the most recognisable, and strongest brands in the world - so even a half-decent product would sell itself if it looked nice and worked well.

In automotive terms, surely all they'd have needed to do is make a car that looks great (from a product design perspective, rather than coming out with something wild or supercar-like - consumer tech should be slick and non-threatening, rather than aggressive) and is as easy to use as possible.

Boiling it down, some form of high-end, quality-feel B- or C-segment car with a minimalist design inside and out, and an electric powertrain, would be the ideal Apple car.

And it gives me another opportunity to post Marc Newson's Ford 021C again, as it fundamentally nails Apple's design ethos, albeit of the time it was designed. Today, a black and silver combo would probably be more appropriate than orange and white, which is a bit iMac G3. 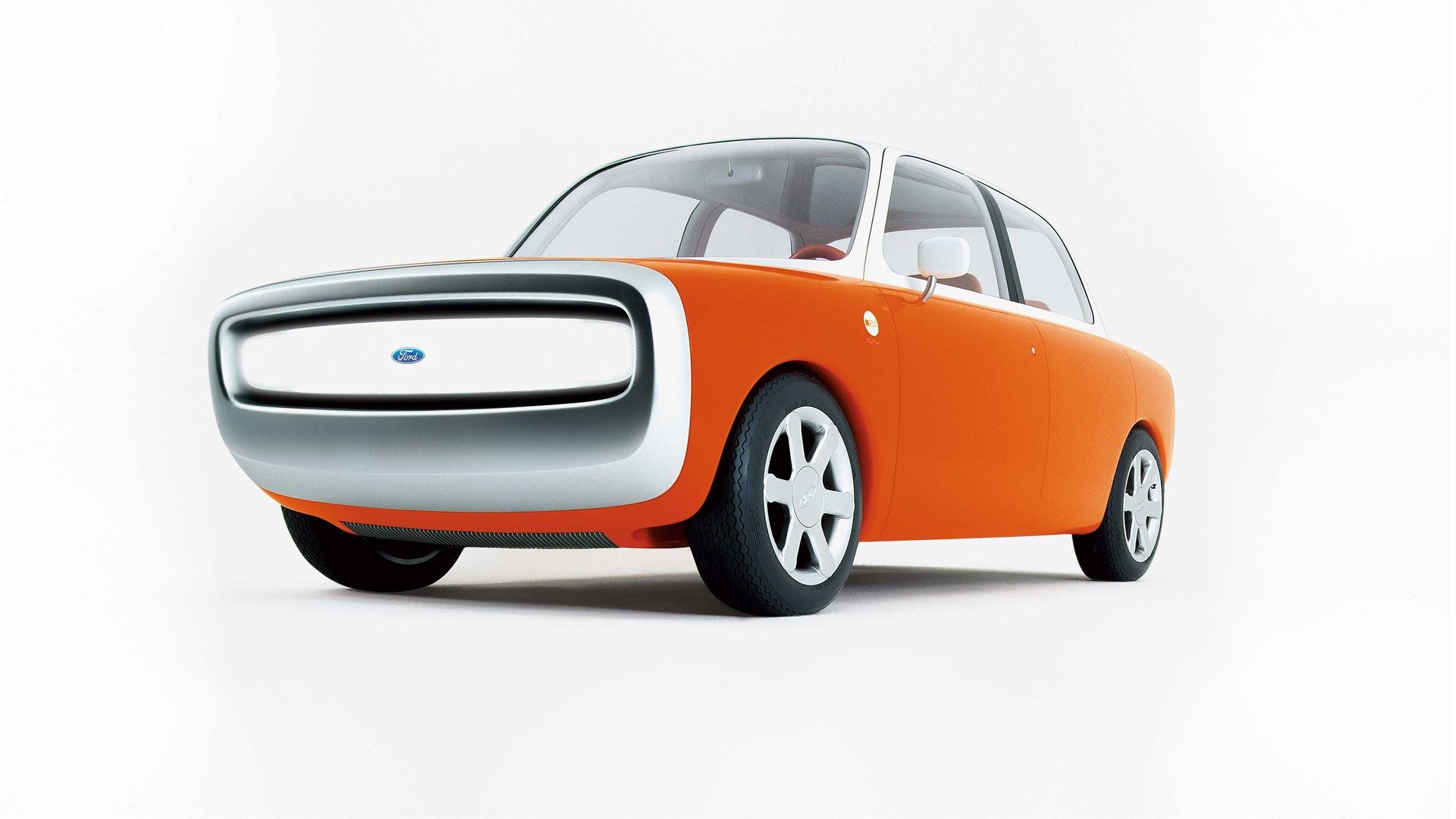 You could keep the same purity of form. The interior could be pared down to its bare essentials - today we live in the era of Apple CarPlay anyway, so an infotainment system that immediately replicates your phone's functions is all that you'd need. It wouldn't need to be fundamentally better at anything than something like a Fiesta, it would just need to be as simple as possible to operate and run.

Tim Cook finally confirms they are indeed working on self driving car system. Up until now it had been the worst kept secret in Silicon Valley!

Whether it produces a car or just a licence for technology is yet to be seen but I don't think Apple like sharing.

It's time to revive this thread, because this is actually happening. For realsies, this time.

After weeks of rumors surrounding Apple and Hyundai, yesterday Bloomberg reports that Apple has invested $3.6 billion in Kia

The iPhone maker plans to set up production with Kia and build Apple cars at the automaker’s facility in Georgia, U.S., DongA Ilbo reported, without citing anyone. The companies may sign a deal on Feb. 17 and aim to introduce Apple cars in 2024, according to the newspaper, which said they have an initial target to produce 100,000 autos a year.
Click to expand...

According to Business Insider research, the Americans poached the longstanding head of chassis development at Porsche to build their own car. Cayenne boss Dr. Manfred Harrer (48) was considered one of the best engineers in the Volkswagen Group.
Click to expand...

While it is still unclear exactly what the first Apple Car will look like, those familiar with the plans say there are a couple of notable features.

“The first Apple Cars will not be designed to have a driver,” said one source with knowledge of the current plan. “These will be autonomous, electric vehicles designed to operate without a driver and focused on the last mile.” That could mean Apple cars, at least initially, could focus on package food delivery operations and firms incorporating robotaxis.
Click to expand...

Hyundai Motor Co. and its affiliate Kia Motors Corp. said that they aren’t in talks with Apple Inc. to develop an autonomous vehicle, responding to intense speculation about the potential new product by the maker of the iPhone.

Apple paused discussions with Hyundai and Kia weeks ago about building an electric vehicle, people familiar with the matter told Bloomberg late last week. The Cupertino, California-based company has discussed similar plans with other auto manufacturers, the people added, asking not to be identified because the information isn’t public.

The South Korean carmakers also said in regulatory filings Monday they were in talks with multiple companies about autonomous EVs, but that no decision has been made. Shares of Hyundai, which said discussions with partners were in early stages, fell 6.2% in Seoul, while Kia slumped 15%.
Click to expand...

This was after Reuters reported last week that Hyundai had doubts about the arrangement, because they do not like working with others

Executives in Hyundai Motor Co Group are divided over a potential tie-up with Apple Inc, with some raising concerns about becoming a contract manufacturer for the U.S. tech giant, dimming the outlook for a deal.

“We are agonizing over how to do it, whether it is good to do it or not,” said a Hyundai executive aware of the internal discussions on the tie-up with Apple. “We are not a company which manufactures cars for others. It is not like working with Apple would always produce great results.”

Hyundai is traditionally known for its reluctance to work with outsiders, making engines, transmissions and even its own steel in-house under its vertically integrated supply chain as South Korea’s second-largest conglomerate. Although shares in Kia and Hyundai have surged because of the talks, there is considerable opposition to becoming an Apple contract manufacturer, which could hold up any deal with the American giant, these people said.

Apple and Hyundai first started talks over a car partnership in 2018, when Apple’s effort, known as “Project Titan,” was headed by Alexander Hitzinger, who is now a Volkswagen executive, said a person familiar with the matter. But progress was hampered by the South Korean automaker’s reluctance to work with outsiders, the person said.

These talks have not been previously reported.

“It is really difficult (for Hyundai) to open up,” this person said, adding that the South Korean company would likely to have to replace some executives to avoid a culture clash under any partnership with Apple.

The South Korean car manufacturer, however, has excess capacity. Contract manufacturing would help it secure production volume.
Click to expand...

Apple approached Japanese carmaker Nissan about partnering on its autonomous car, but the talks fell through after the tech giant said it wanted the vehicles to be Apple-branded, The Financial Times reported.

The discussions between Apple and Nissan in recent months didn't last long, and collapsed after Apple said it wanted Apple-branded vehicles, which would've effectively downgraded Nissan's role to just a hardware supplier, sources briefed on the matter told the publication.

Ashwani Gupta, Nissan's chief operating officer, told the FT the carmaker was not in talks with Apple.

Nissan is open to working with tech companies as interest in autonomous vehicles grows, he said – but the companies would have to "adapt their services to our product, not vice versa."
Click to expand...

I wish somebody would have told me

From what I see, it's really a OEM vs supplier issue. No large, long established OEM likes or wants to become a supplier, which is what Apple wants. I suspect Apple will have to go with a company like Magna Steyr for contract manufacturing in supplier relationship, or they'll have to do the Apple Car as a JV if they want to partner with another OEM.
Share:
Reddit Pinterest Tumblr WhatsApp Email Share Link